Explainer: How and Why the Assam-Mizoram Border Dispute Escalated, Leading to Five Deaths

The firing at the border of the two states was unprecedented. While the versions offered by the Assam and Mizoram chief ministers differ, Amit Shah's failure to prevent the clash raises questions about the role of the Union home ministry. 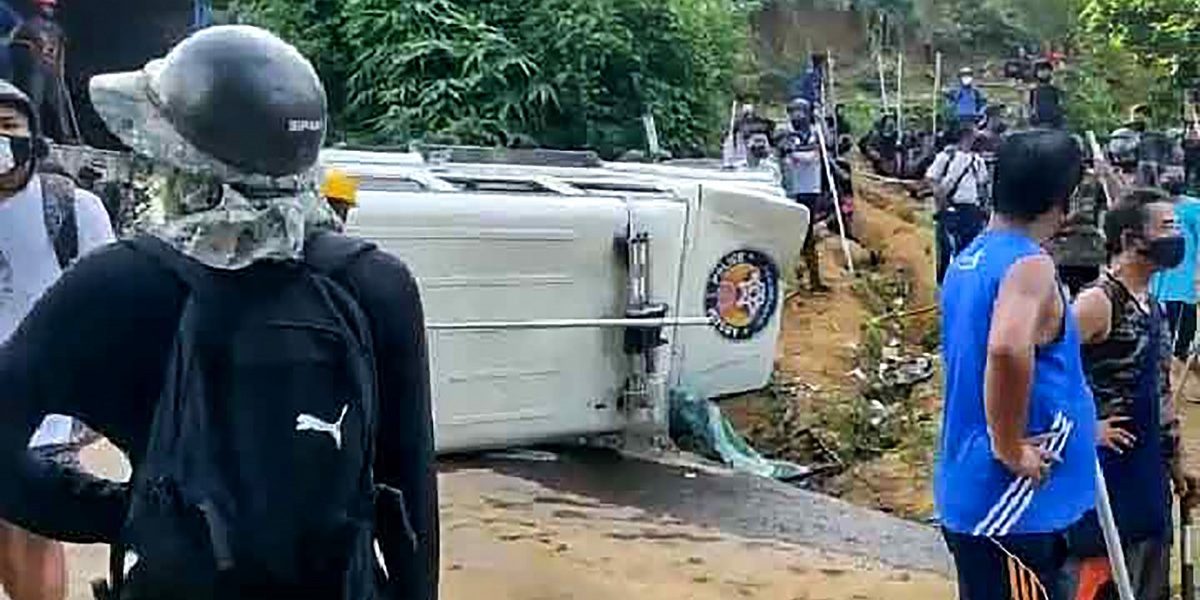 Damaged security force vehicle at the site of the Mondays clashes at Lailapur on the Assam-Mizoram border, in Cachar district, Tuesday, July 27, 2021. Photo: PTI

As violence broke out along the border town of Vairengte in Mizoram’s Kolasib district – which is adjacent to Lailapur in Assam’s Cachar district – at around 4.40 pm on July 26, so did a Twitter war of words between the chief ministers of the two states, Zoramthanga and Himanta Biswa Sarma.

Ironically both CMs, who are members of the BJP-led North East Democratic Alliance (NEDA),  began tagging Shah, the Prime Minister’s Office (PMO) and Modi, as if expecting them to come to their rescue. Sarma uploaded video clips for people to “know how personnel of Mizoram police acted and escalated the issue” and purportedly showing “Mizoram Police and goons celebrating” after  causing the death of Assam Police personnel.

Those who lost their lives in the skirmish were Assam Police sub-inspector Swapan Roy and constables Liton Suklabaidya, N. Hussain, Samsul Zaman Barbhuiya and M. H. Barbhuyia. Among the injured was the superintendent of police, Cachar, and the Inspector General of Police.

Sarma also accused Mizoram Police of using light machine guns (LMGs). He said the use of LMGs “speaks volumes about the intention and gravity of the situation.”

Meeting and the border

The only problem with appealing to Shah is that the Union home minister has once again been found asleep at the wheel. For months now, North Block has received inputs of mounting tension on the Assam-Mizoram border. But Shah appears to have been oblivious to the gravity of the situation.

The fact that he met both Sarma and Zoramthanga in Shillong and yet was unable to forestall Monday’s deadly clash will reinforce the impression that Shah’s interests are primarily political and not administrative.

According to ANI,  Zoramthanga, at the July 24 meeting with Shah and Sarma, had said that the areas claimed by Assam were used by Mizos for more than a 100 years. He had also alleged that Assam had started claiming those border areas because of its population growth due to a spike in the number of ‘migrants’ settling down in the Barak Valley. 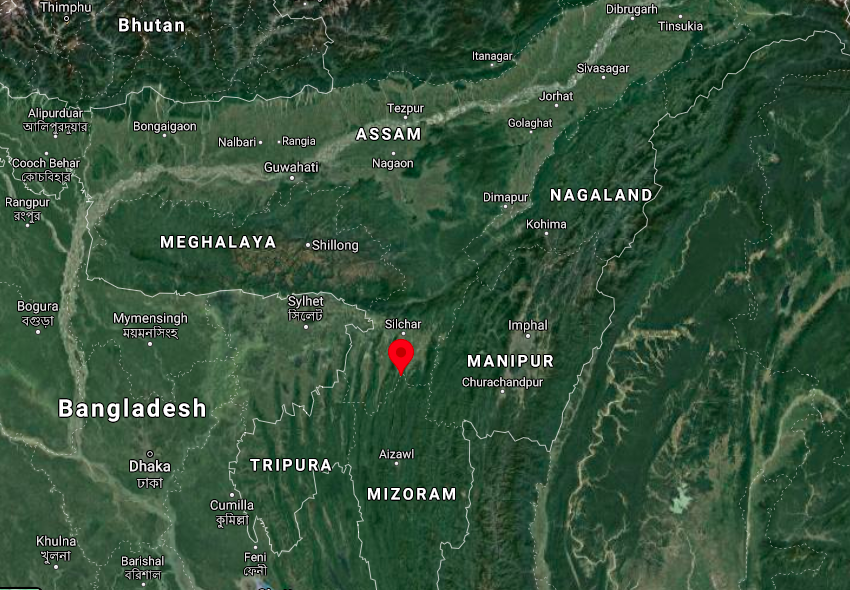 The Assam-Mizoram border. The marker is on Vairengte. Photo: Google Maps

A day after the violence, on July 27, Sarma, along with his trusted aides, minister Pijush Hazarika and MLA Ashok Singhal, along with local MLAs, visited the disturbed district of Cachar.

At a press meet in Silchar, Sarma said that for the past two months, there had been at least 12 to 13 attempts to occupy “Assam’s land in five sectors” along the inter-state border.

He said, “But I can assure people in Assam that not an inch has been ceded by Assam after May 10 (the day Sarma took over as Assam chief minister).”

“In the Shillong meeting, I had told Zoramthanga, ‘Let’s do a satellite mapping of the present border even if it is till May 10 (2021) and maintain the status quo and let the Central government decide on the permanent status,’ to which he agreed. But after the draft was readied, his government refused to sign on it.”

“I was on phone with Zoramthanga on July 26 from 11.30 am, till 4.40 pm when the firing began. I requested him to intervene and stop the violence. When the firing happened, I informed him and he said I am sorry about it. That was the last we spoke on phone.”

The Wire breaks down what led to the unprecedented firing involving the police forces of two neighbouring states on July 26.

What happened on July 26?

According to Assam chief minister Sarma, on July 25, his administration in Guwahati received input from the Silchar district forest officer about a road being constructed by Mizoram inside the inner line reserve forest on the border near Lailapur.

He said this led a delegation of Assam officials to visit the spot led by an IGP, the Cachar SP and the district commissioner on July 26. “They found that not only was a road being constructed inside the reserve forest (the road was stated to be going towards Renti Basti in Assam) by breaching the status quo and destroying the Inner Line reserve forest in the Lailapur area, but there was also a new armed outpost of the Mizoram Police.”

“The team requested that the outpost created next to the camp of a neutral force, the CRPF, be removed and status quo be maintained. While they were still in dialogue with the Mizoram police personnel, a number of civilians atop a hillock began to fire at them, leading to injuries and death of our personnel. I have video evidence with me to show that the civilians were armed. Now the question is, who gave arms to them?” he told reporters in Silchar on July 27. 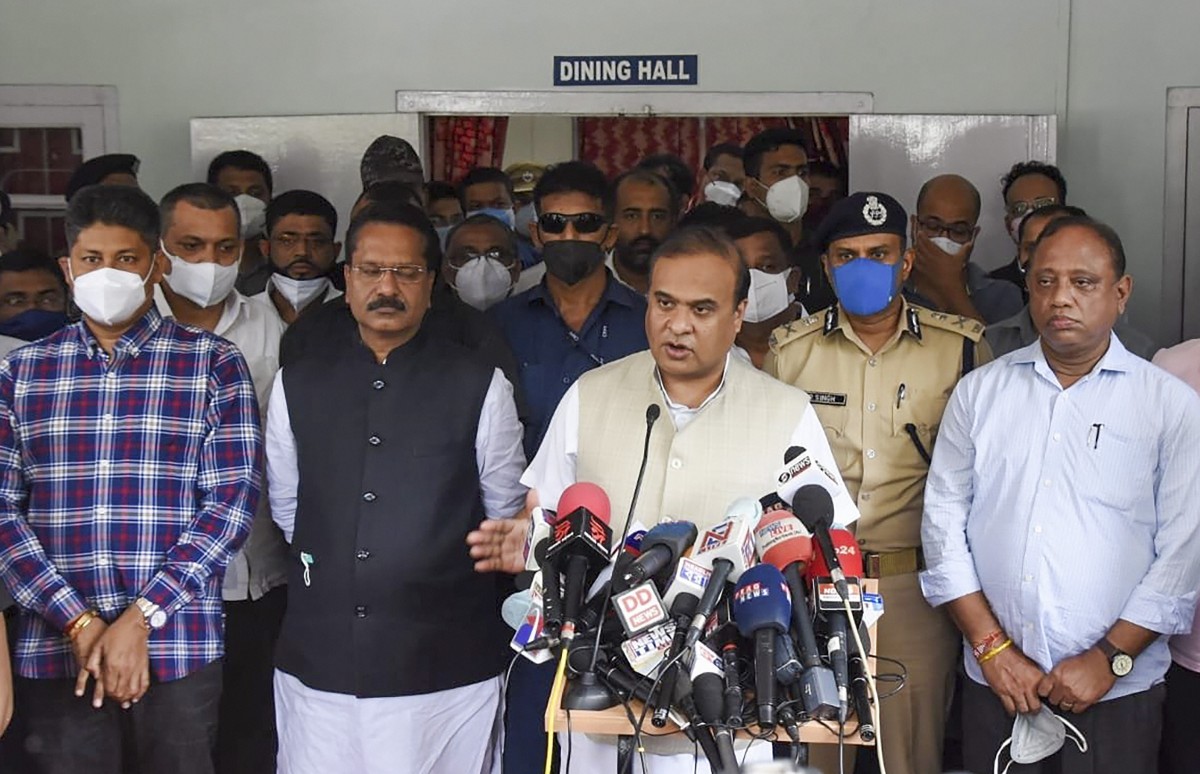 In a statement issued on July 26, the Assam government accused Mizoram Police of supporting the civilian mob.

“The aggressive behaviour and posture of this mob along with the fact that they were brandishing weapons and wearing helmets is clearly seen in all available video footage. While the mob pelted stones on (at) the Assam officials and destroyed three vehicles including the DC’s car, the Mizoram Police simultaneously fired tea gas shells on (at) the delegation. The IGP was injured in this barrage.”

It further said, “In the afternoon, SP Kolasib along with two additional SP level officers held a discussion with the Assam delegation during which they were requested to control the mob and not let them take the law in their hands, thus disturbing peace.”

The Assam government statement said that though the Mizoram police personnel ostensibly went to speak to them, they soon said they cannot control the mob. “Horrifically, even while the SP Kolasib, was in talks with the Assam officers, the Mizoram Police opened fire on the Assam officials and civilians, who had by then gathered there (on the Assam side), from two dominating high features (hillocks) with automatic weapons including LMGs.”

The Mizoram statement said, “The Assam police also damaged several vehicles that were travelling along the national highway between Vairengte and Lailapur.” 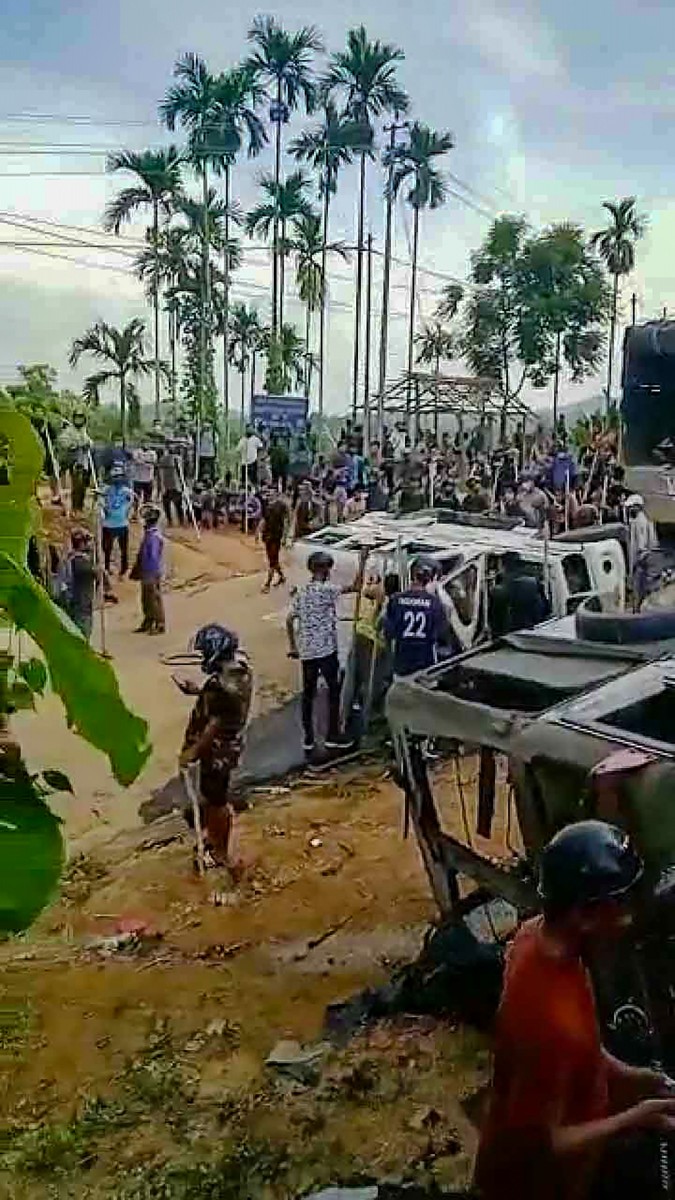 Damaged security force vehicles at the site of the Mondays clashes at Lailapur on the Assam-Mizoram border, in Cachar district, Tuesday, July 27, 2021. Photo: PTI

The statement said the residents of Vairangte town assembled after the violence occurred. Though a video shared by both the chief ministers featured civilians armed with sticks, the Mizoram government’s statement called them “unarmed” and stated that they were instead “assaulted by Assam Police with lathi charging…tear gas, thereby causing injuries to several civilians”.

The Mizoram government also accused the Assam Police of not only using tear gas on the Mizoram Police but also firing at them first. On Tuesday night, the state chief minister tweeted that one policeman from the state had been injured.

The government’s statement said, “Mizoram Police responded spontaneously by firing back at Assam Police in spite of the fact that the SP, Kolasib district, was still inside the CRPF duty camp negotiating with Assam Police authorities.”

As stated by Sarma, the situation on the Assam-Mizoram border has been particularly uneasy for the last two months.

As per news reports, early this month, around 25-30 people from Mizoram attempted to encroach into land inside Assam – leading to a number of blasts which were claimed to be IED explosions by the Assam Police. Reports said the Assam Police had claimed that these blasts took place in the Cachar district, and were engineered allegedly by “miscreants from Mizoram during an eviction drive” in Khulichera area.

The last instance of violence in the Lailapur and Vairangte area can be traced back to October 2020 when civilians on both sides had engaged in clashes. Around the same time, a similar pattern of violence was reported from Assam’s Karimganj side which is adjacent to Mamit district of Mizoram.

In February 2018 too, the Mizoram-Assam border, along Hailkhandi district, witnessed violence with Assam Police reportedly baton charging supporters of the powerful student body Mizo Zirlai Paul (MZP) who had protested the removal of a shed it had constructed. The Assam Police had called it an encroachment. Several journalists were also injured in that lathicharge.

In recent times, the border clash has only intensified.

What is the dispute?

The boundary dispute of Assam with states carved out of it after Independence is not new. Among those disputes, the one with Nagaland has led to large-scale violence and deaths for considerable time and the volatility of the situation along the Golaghat district of Assam continues. There was a clash between the Assam and Nagaland police on the border dispute in the 1980s, in the Merapani area of Assam’s Golaghat district.

The Assam-Mizoram border dispute has, however, never seen such an escalation before.

The basic premise of the dispute between Mizoram and Assam has been around two notifications dating back to the British era. Mizoram, before it became a Union Territory in 1972 and a state in 1986, was the Lushai Hills District of Assam.

Locals during a clash with police personnel at Assam-Mizoram border at Lailapur in Cachar district, Monday, July 26, 2021. Photo: PTI

While the Mizos acknowledge the colonial era notification issued in 1875 which separated the Lushai hills from the Cachar plains, because it was done after a discussion with the tribal chiefs, Assam acknowledges yet another British era notification issued in 1933 which demarcates the boundary between the Lushai hills and Manipur. Mizoram argues that the 1933 notification was issued without consulting the Mizos, and thus calls for the 1875 notification to be accepted instead – also because it was derived from the Bengal Frontier Regulation Act, 1873, based on which a non-Mizoram resident still needs an inner line permit to enter the state.

Speaking to reporters in Cachar on July 27, Assam chief minister Sarma addressed the issue, stating, “Mizoram was carved out of Assam. Earlier it was all Assam’s land. When the Union territory of Mizoram was created, a particular area was given away as the UT. The rest remained as Assam’s land. What was there in the British era is different.”

He also said, “If tomorrow the Centre decides to give certain areas to Mizoram from Assam, I will have to let it go because it is Centre’s prerogative to decide it but till then status quo has to be maintained.”

Most of the states “carved out” would dispute Sarma’s claim that their territory was “all Assam’s land”. After all, undivided Assam and other ‘provinces’ and territories in British India were demarcated by the colonial authorities for administrative and political purposes – often at the cost of trampling on the identity of the different ethnic groups they lumped together.

What is the present state of affairs?

Sarma announced that the Assam Police personnel who are guarding the volatile border would be paid the salary of an additional month. He also said new companies of battalions comprising a total of 3,000 police personnel will be stationed along the border aside from the CRPF. Since the incident took place on land within “Assam’s jurisdiction”, the chief minister said an FIR would be filed which would lead to an inquiry into “who armed the civilians”.

The DGPs of Assam and Mizoram have been summoned by the Ministry of Home Affairs on July 29 to sort out the matter.