That the BJP won 50% of the votes shows it decisively won the people's support, also revealing that politics is not simple arithmetic. 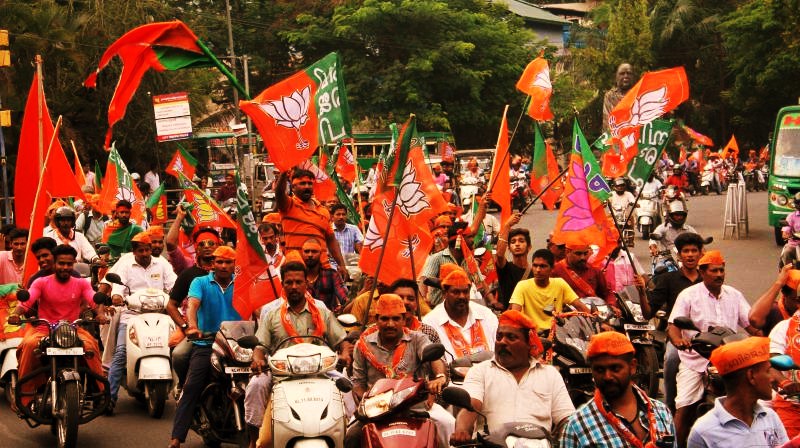 In the hotly contested general elections of 2019, the Bharatiya Janata Party (BJP) was expected to perform poorly in Uttar Pradesh, where it had won 72 seats in 2014. The alliance between the Samajwadi Party (SP) and the Bahujan Samaj Party (BSP) was expected to break the saffron party’s hold on the state, but it did not prove to be so. The BJP won 62 seats, with its ally Apna Dal winning another two. The SP-BSP alliance secured just 15 seats.

After the results were announced, questions may be lingering in many minds. Did the SP-BSP alliance ever make sense? How did the level of competition change between 2014 and 2019 in the state? Could the results have been different if the Congress was also a part of the grand alliance? Did the Congress harm the Mahagathbandhan by cutting into their vote share? How did the performance of parties change between the two general elections?

Some of these questions can be answered (at least partially) by analysing the election data of the past two general elections.

Level of competition in the election

For the first time since 1984, the average winning vote share crossed the 50% mark. It suggests that the winners did not just reap the benefit of fragmentation of votes – a common feature of the first-past-the-post system – but decisively won with overwhelming popular support.

The election was a bipolar competition between the NDA and the Mahagathbandhan. In 78 of the 80 seats, the BJP (or Apna Dal) and Mahagathbandhan candidates were in direct competition with each other. The two other seats are Raebareli and Amethi, the traditional Congress bastions, where Mahagathbandhan did not field their candidates. The BJP managed to uproot the Congress from Amethi, resulting in an embarrassing defeat for Congress president Rahul Gandhi. Therefore, the Congress was nowhere in the race; it was a distant third in almost all the seats it contested. 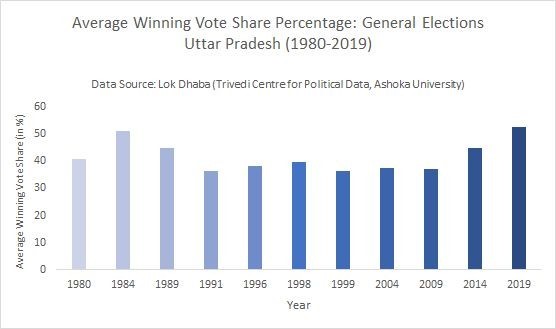 Average winning vote share in UP general elections between 1980 and 2019. 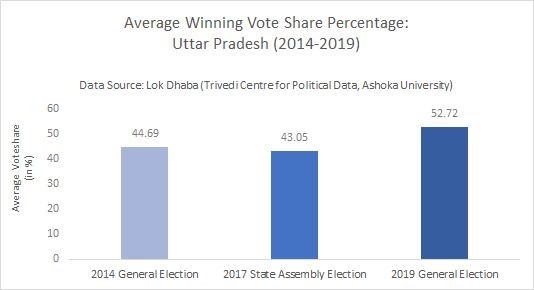 It was almost taken for granted that the BJP will lose a significant number of seats in the
Hindi-belt, and particularly in Uttar Pradesh. The BJP’s vote share decreased marginally in the 2017 state assembly election. Its vote share was predicted to decrease substantially in the 2019 general election.

Impressively, the party not just managed to retain its earlier support, but also increased it very significantly, taking its vote share to a historic high of 51%. 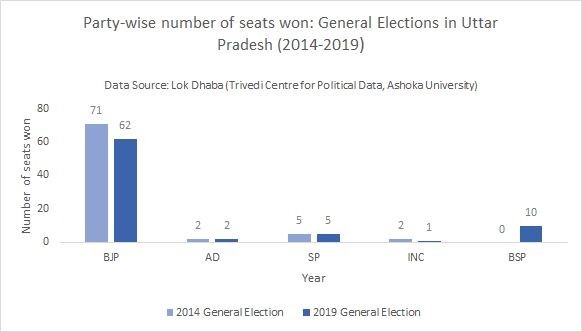 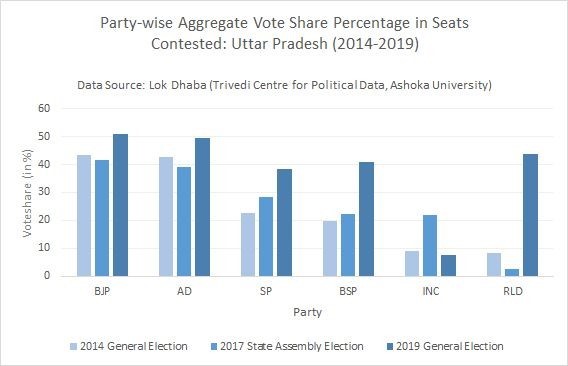 Similarly, the graph may give an impression of an extraordinary improvement in the RLD’s performance. However, it is because the RLD was also a part of the Mahagathbandhan and, more importantly, it contested only three seats – two of which were contested by the party chief Ajit Singh and his son Jayant Chaudhary.

The increase in Congress’s vote share in 2017 was mainly because it was then in alliance with the SP and gained from the transfer of votes. The Congress actually lost its vote share between the two general elections, despite the much talked about ‘Priyanka Gandhi effect’. The decrease may be attributed to communities that vote as a bloc: that they preferred to consolidate behind the Mahagathbandhan, which might have seemed to them as a more formidable bet against the BJP. However, it does not explain Rahul Gandhi’s loss in Amethi and the decline in vote share in Raebareli – where the Mahagathbandhan did not contest, suggesting the decline has more to it than just voters consolidating behind stronger opponents of the BJP.

BJP is the now the undisputed hegemon

In spite of the two key players of Uttar Pradesh politics coming together, the BJP managed to avoid any substantial loss in its seat share. The NDA not just managed to win 64 of the 80 seats, but in most seats, its vote share was 15% above its opponents. This signifies its new hegemonic position in UP.

Also Read: How BJP Held off the Mahagathbandhan in Uttar Pradesh

The slight drop in the average winning margin percentage of the BJP between the 2014 and 2019 general elections can hardly be considered a decline in their performance, considering that the party faced a united opposition. Rather, it should be considered a big achievement. The BSP has the lowest winning margin, suggesting that it won most of the seats with relatively narrow margins. 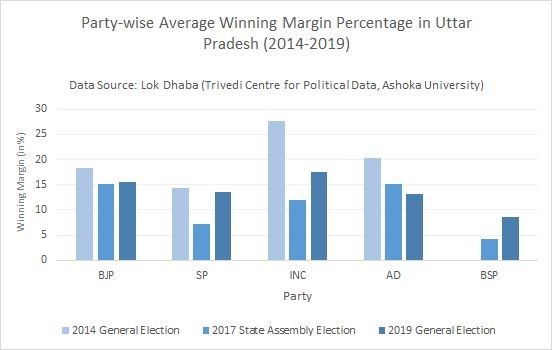 Could the inclusion of Congress in the alliance have changed the big picture? 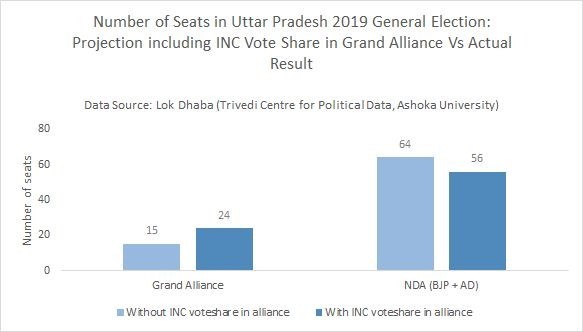 Projection of seats that the gathbandhan could’ve won if the Congress was also an alliance partner.

The SP-BSP combine performed poorer than in 2014

The combined vote shares of the SP and the BSP actually declined by more than three percent between the two general elections. The decline in the SP-BSP vote share cannot be attributed to the Congress, as the Congress’s vote share itself has also declined.

The NDA’s vote share, on the other hand, increased substantially in the same period. There could be many reasons behind it: transfer of votes between the support bases of SP and BSP did not completely happen and some of them chose NDA; or one, or both of SP and BSP lost the support of some voters who had supported them in the previous general election; or a very large number of new voters decided to back the NDA, resulting in the overall change of vote share percentage; or all of these; or some of these; or something completely different.

While there could be many reasons behind the altered vote shares, the larger point is that the NDA increased its share substantially, while the opposition parties lost theirs. 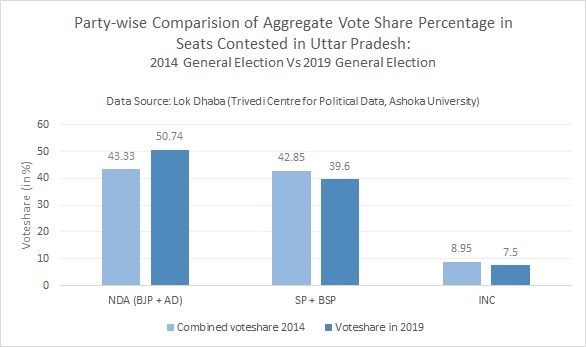 Note: The above graph does not take the RLD into account because it was in alliance with the Congress in 2014 and a part of the Mahagathbandhan in 2019. The overall effect is negligible.

Did the Mahagathbandhan make any sense?

A projection based on the combined vote shares of the BSP and SP in 2014 suggests that they could have won 42 out of 80 seats in 2019. This is more than eight times the numbers of seats both the parties won contesting individually. Again, this is based on the implicit assumption of complete transfer of votes between the support bases, which often does not happen. Nonetheless, an alliance between the two parties made a lot of sense based on the voting patterns in 2014 – at least arithmetically. 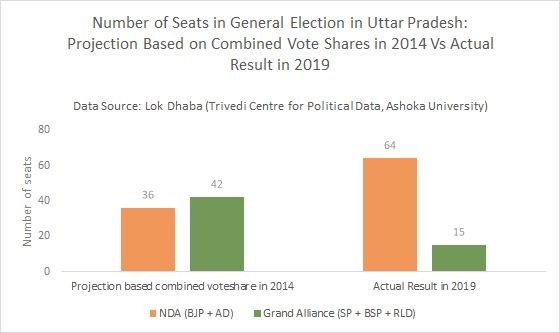 Projection based on combined vote shares in 2014 vs actual result

If anything, the analysis reveals that politics is not simple arithmetic; two plus two does not necessarily equal four here.