The Choice of Nirmala Sitharaman as Finance Minister

Her lack of experience and deferential working style are likely appreciated by Modi, who may want to play a bigger role in steering the economy over the next five years. It’s rare that an Indian parliamentary debate racks up millions of views online, is tweeted by the prime minister, and avidly shared and reported in the news.

One such debate took place in the Lok Sabha in January 2019. It was Nirmala Sitharaman’s hour-long rejoinder to the allegations of cronyism leveled by Rahul Gandhi and the Congress party over the controversial Rafale deal.

For most of the duration of her speech, Sitharaman is a sharp, no-nonsense and solemn defence minister, slowly and calmly listing out the nuances of the medium-multi role combat aircraft (MMRCA) tender.

Near the end, she becomes less raksha mantri and more angry BJP spokesperson – a role that she not only excels at, but which propelled her initial, rapid rise in the party.

Also read: Why Nirmala Sitharaman’s Rafale Defence Was on a Weak Wicket

Pointing furiously at Rahul Gandhi across the aisle, Sitharaman said:

“I was called jhoothi (liar). Later, it was expunged but I heard in the melee that day… It was said Raksha Mantri Nirmala Sitharaman jhooth bol rahi hai. Pradhan Mantri chor hain, ye bhi is parliament mein bola gaya. Pradhan Mantri jhoothe hain, ye bhi idhar bola gaya. (Defence Minister Nirmala Sitharaman is telling lies. The prime minister is a thief, it was said in parliament. The prime minister is a liar, this was also said here).”

In staccato bursts, she continued:

“I don’t have a khandaan to boast of. I come from an ordinary background. I come from a middle-class family. I come with my honour intact. The prime minister comes from a very low, poor economic background. He has come up with hard work. His name is untarnished till today. He is not corrupt.”

Modi’s enthusiastic and public approval of her speech was just one sign of how the BJP considered Sitharaman the right woman for the right job – even if it sometimes meant throwing her to the wolves, as when she was sent to distance the government from the Nirav Modi scam – despite being defence minister, while Arun Jaitley was finance minister.

But her quick rise – from a low-profile, English-speaking spokesperson on TV in 2010, to an occupant of the Ministry of Commerce (MoS – independent, 2015), Defence (2017) and now Finance ministry – shows that the BJP and the Modi-Shah duo consider her a prized asset.

It is easy to mark Sitharaman as the odd one out. A high-ranking Tamil in a party dominated by Hindi-speaking North Indians. A BJP minister with almost zero prior affiliation to any Sangh Parivar body – whose formative institution was Jawaharlal Nehru University (JNU), where as an economics student, she was part of a group called the ‘Free Thinkers’.

Sitharaman chalks up her quick promotion, in part, to cosmic grace.

“Somebody who has come from a small town, grown into the party with all the support of the leadership… and if given such a responsibility, it just makes you feel sometimes that cosmic grace is there,” she told reporters in 2017. “Otherwise, it is impossible.”

Her small-town roots extend back to Madurai, where she was born into a Tamil family full of Congress party supporters; both her in-laws served Congress governments in Andhra Pradesh. After studying economics at Seethalakshmi Ramaswami College in Trichy, she went onto do her masters at JNU, with research on the textile industry and Indo-European trade.

After moving back to India from London with her family, Sitharaman was appointed to the National Commission for Women during the first NDA-Vajpayee government. Her further journey into the BJP was encouraged by Sushma Swaraj, who at the time was looking to rope more female faces into the saffron party.

It was her time in the party’s national executive, and on television, when Sitharaman shined. She built a reputation for being the straight-backed, unsmiling and fierce spokesperson who went on air each night to effectively question the UPA-II’s scams and the culpability of the Lutyens’ elite in allowing corruption to fester.

Sitharaman’s time in the government has been more of a mixed bag. It’s unclear whether the problem lay in the Modi government’s vision or in her own skill at implementing specific programmes.

As minister of state (MoS) in the finance and corporate affairs ministries, and then as a MoS (independent charge) in the commerce ministry, she was described by columnist Mihir Sharma as a “grave disappointment”. Sharma wrote in December 2015:

“The ministry in charge of trade and ‘Make in India’ is effectively scuppering the programme by being protectionist and distrustful of trade. Its greatest success is a rise in foreign direct investment. But that’s not a consequence of any changes to policy.

Even the recent relaxation in FDI norms was, even Sitharaman insisted, ‘not a new policy’.  What should have been a laser-like focus on reducing paperwork and compliance and increasing service efficiency has been effectively diluted by one headline-grabbing campaign after another.”

Other programmes that Sitharaman headed, like ‘Start-Up India’, are widely acknowledged to have not succeeded or almost completely fizzled out. Again, it’s unclear if this was a problem in how they were conceived and structured by Modi’s PMO.

Much of the improvements in India’s business environment – and a jump in the World Bank’s Ease of Doing Business rankings – came a year after Sitharaman joined the defence ministry. They are widely credited to micro-management by Jaitley and the PMO.

She also presided over years of mostly flat growth in exports (which had doubled under the UPA-II), a problem that the next commerce minister, Suresh Prabhu, tackled equally ineffectively.

Sitharaman’s promotion to the defence ministry was widely seen as a surprise move. Indeed, in the run-up to the shuffle, media reports based on anonymous sources had indicated that she would be dropped from the Union Cabinet. At the time, Indian Express columnist Coomi Kapoor wrote that the stories were deliberately leaked from BJP headquarters, and that her promotion was meant to cut certain party-members to size.

Her critics argue that her lack of experience and deferential, collegiate working style are appreciated by Modi’s overbearing PMO.

“There was a reason to install Nirmala Sitharaman, a junior party apparatchik and political lightweight with no constituency of her own as defence Minister: She would be more amenable to direction by the PMO.

In the first year or so of her tenure, with no intuitive grasp of the subjects she handled, she frequently crossed over to North Block to ask Finance Minister (and sometime Defence Minister) Arun Jaitley about what decisions to make.

It convinced the PMO that it had made the right choice because Jaitley, as a rule, decided on defence issues only after first consulting with the PM. In this respect, both Jaitley and even more, Sitharaman, were a welcome contrast to the late Manohar Parrikar, who kept his own counsel.”

Her time as raksha mantri has been a well-rounded performance, although one-and-a-half years is too short to really take on the challenges that the ministry presents.

She was, as her critics note, less visible on the Pulwama-Balakot issue – perhaps on instructions from higher-ups – but also made her presence felt on other public-facing issues, like the government’s handling of litigation against retired army officials and their families.

Finance ministry and the future

Two questions surround her role in the Modi 2.0 cabinet.

Firstly, why was Sitharaman picked over a more natural fit like Piyush Goyal?

Secondly, what are the challenges she will face and how well will she tackle them? 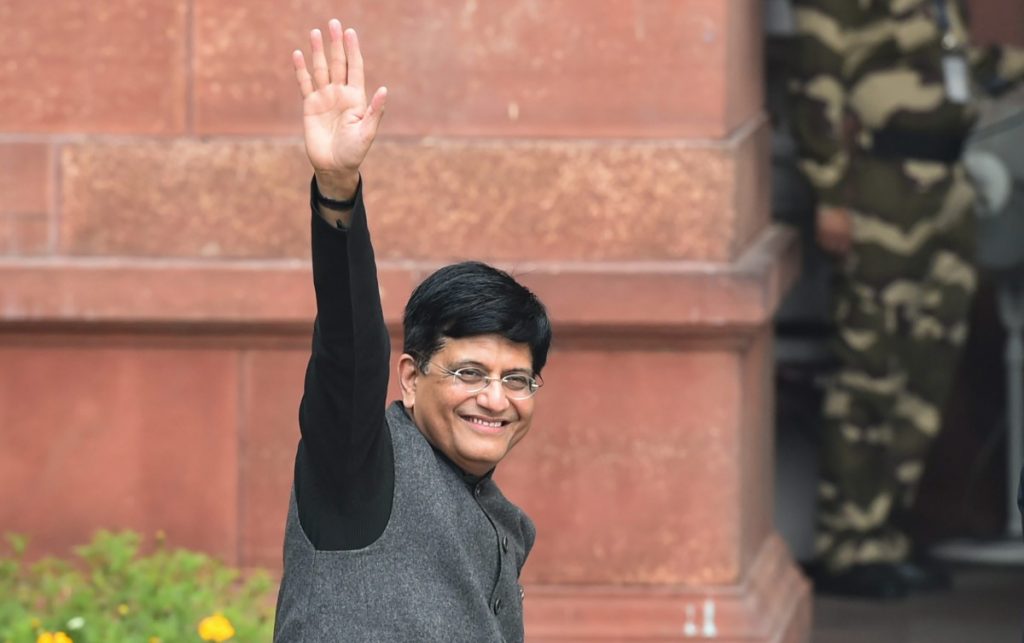 Initial market reactions have been one of surprise. Among the more tepid reactions was that of Samco Securities’ Omkeshwar Singh, who says there will be “uncertainty as her appointment was not expected”. Well-known fund-manager Sandip Sabharwal called her a “relatively unknown entity despite holding a key portfolio in the previous government”.

“Frankly, the portfolio should have been given to Piyush Goyal, who is a CA by qualification, and he would have been the first choice of the market. But, I think Nirmala has done well previously, so it should be alright,” Yogesh Nagaonkar, CEO, Rowan Capital Advisors said in a statement.

Why not Goyal? The Wire’s M.K. Venu says that it’s likely because of his “social proximity to Mumbai businessmen who had assumed he might be FM”.

“General integrity and a distance from business lobbies has possibly gone in favour of Nirmala Sitharaman who takes charge as finance minister.”

The challenges that she will face as finance minster are immense. India’s economy is starting to sputter on the back of a consumption and private investment slow-down. Fixing this and jump-starting the economy are the first order of business.

Then comes the task of setting the country’s banking and NBFC sectors back in order, while addressing agricultural distress without ruining the government’s fiscal stance.

Looking forward, she will have to shepherd the government’s new reforms on labour, land and public-sector undertakings. In an interaction on Friday, Niti Aayog’s Rajiv Kumar promised the moon on this front –  it will be up to Sitharaman to deliver it.