It is evident that the 'exit poll' was part of a well-considered strategy to boost the prospects of the BJP in the UP elections. But who its authors are is still a mystery. 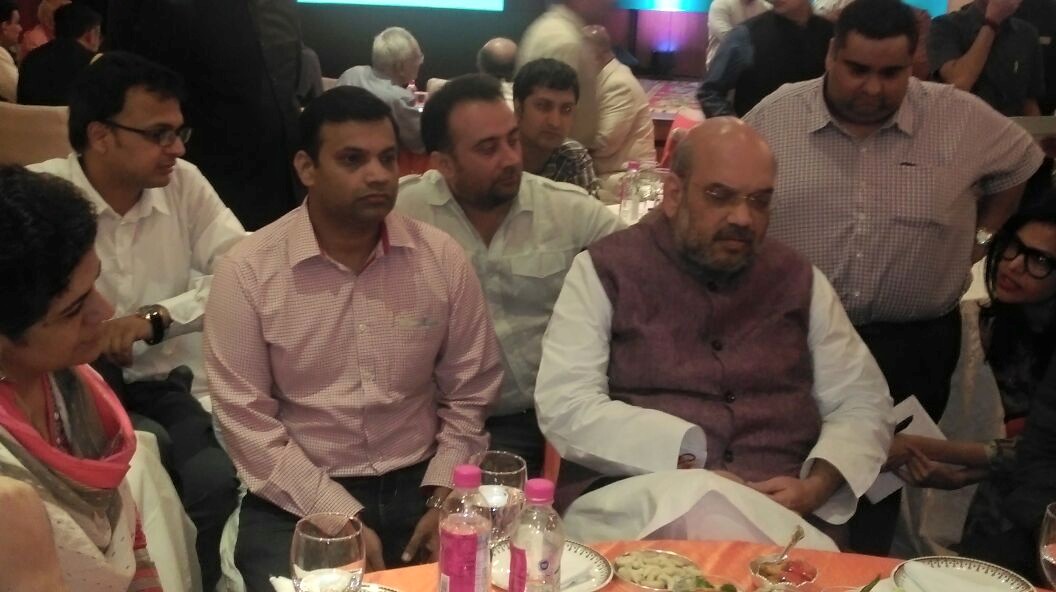 New Delhi: The exit poll published by Dainik Jagran in contravention of election laws right after the first phase of voting ended in Uttar Pradesh was supplied by a senior business executive at the mass circulation Hindi daily – who just also happens to be an activist of the Rashtriya Swayamsevak Sangh, The Wire has established.

The poll showed the Bharatiya Janata Party surging ahead of its rivals and though it was was quickly taken down, the ‘news’ it conveyed was widely circulated by BJP and RSS activists across UP via WhatsApp.

Acting on a complaint filed by the Election Commission soon after the publication of the exit poll, the Uttar Pradesh arrested the online editor of  Dainik Jagran, Shekhar Tripathi, even though the newspaper’s CEO Sanjay Gupta had admitted the exit poll was “carried by our advertising department.”

It has now emerged that the controversial exit poll was sent to the newspaper by Tanmay Shankar, then the business and marketing head at Jagran Prakashan and MMI Online Ltd – the holding company for the Jagran group’s digital products – and published with the clearance of MMI head Sukriti Gupta.

In an email to Jagran’s various editorial departments on February 10, Tanmay Shankar instructed that “a pre_poll analysis from http://rdiindia.com” run “on our P1 Slot.” 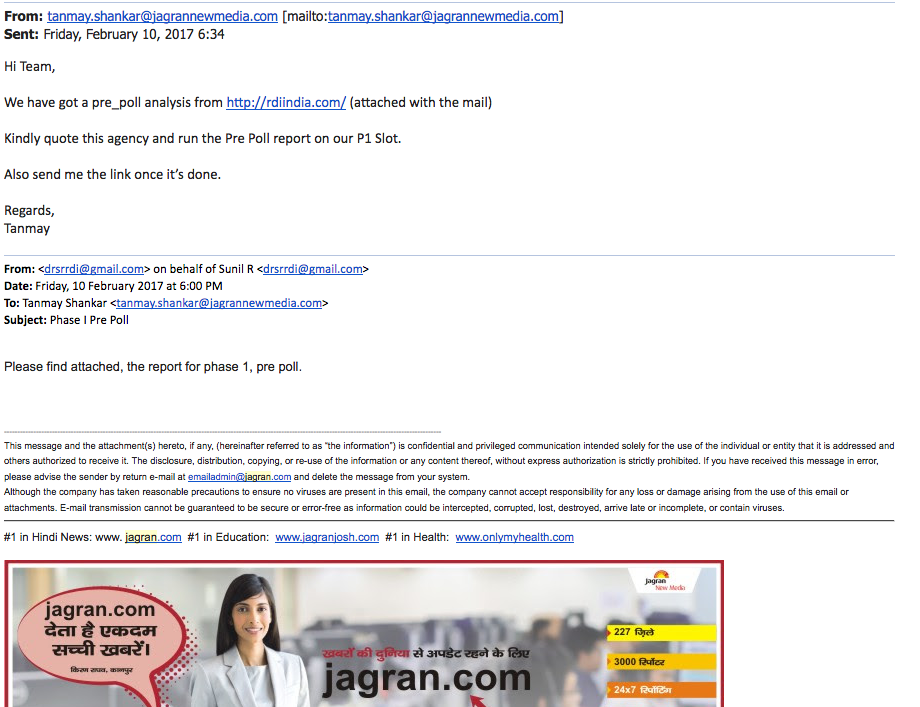 Email sent by Tanmay Shankar to the editorial team at Dainik Jagran on February 10, 2017.

In his email, Shankar mentioned the source of the poll as “http://rdiindia.com”. The trail mail shows that he received the poll from one “Sunil R” with the email address “drsrdi@gmail.com”. While the URL belongs to Resource Development International, a human resources management firm in Gurgaon that has nothing to do with election surveys, the initials RDI are common to another company, Research and Development Initiative, with the URL http://rdiindia.org, which not only has conducted election surveys in the past but whose promoter, Devendra Kumar, has worked with BJP leaders like Arun Jaitley and Vasundhara Raje in the past.

Although the Election Commission’s complaint named Resource Development International, its head, Rajeev Gupta denied any involvement and EC officials acknowledge on background that Dainik Jagran clearly misidentified the company. On his part, Devendra Kumar of Research and Development Initiative told The Wire that he knows nothing about the Jagran poll and that his company was not involved in the matter.

The keys to the mystery, of course, lie with Tanmay Shankar.

Asked for the full name of ‘Sunil R.’ – the man who sent him the poll that he had forwarded to the editorial department of Dainik Jagran – Shankar told The Wire that he did not know. Nor could he explain why he had mentioned http://rdiindia.com as the polling agency in his email.

A call to the offices of the Research and Development Initiative failed to yield any information about ‘Sunil R’ and email queries to the drsrdi@gmail.com have also gone unanswered.

While the EC and UP police are likely to consider Tanmay Shankar a person of interest in their ongoing investigation into the  the exit poll,  the Jagran executive’s Facebook page provides some clues about his political links that may shed light on the identity of the authors of the poll.

In the wake of The Wire‘s questions, Shankar appears to have edited his Facebook page to delete all traces of his association with the RSS. However, screenshots and photos downloaded before he could do so paint a picture of a man committed to the RSS, attending its ‘shakhas’ and paying obeisance to its revered leader, ‘Guru’ Golwalkar. 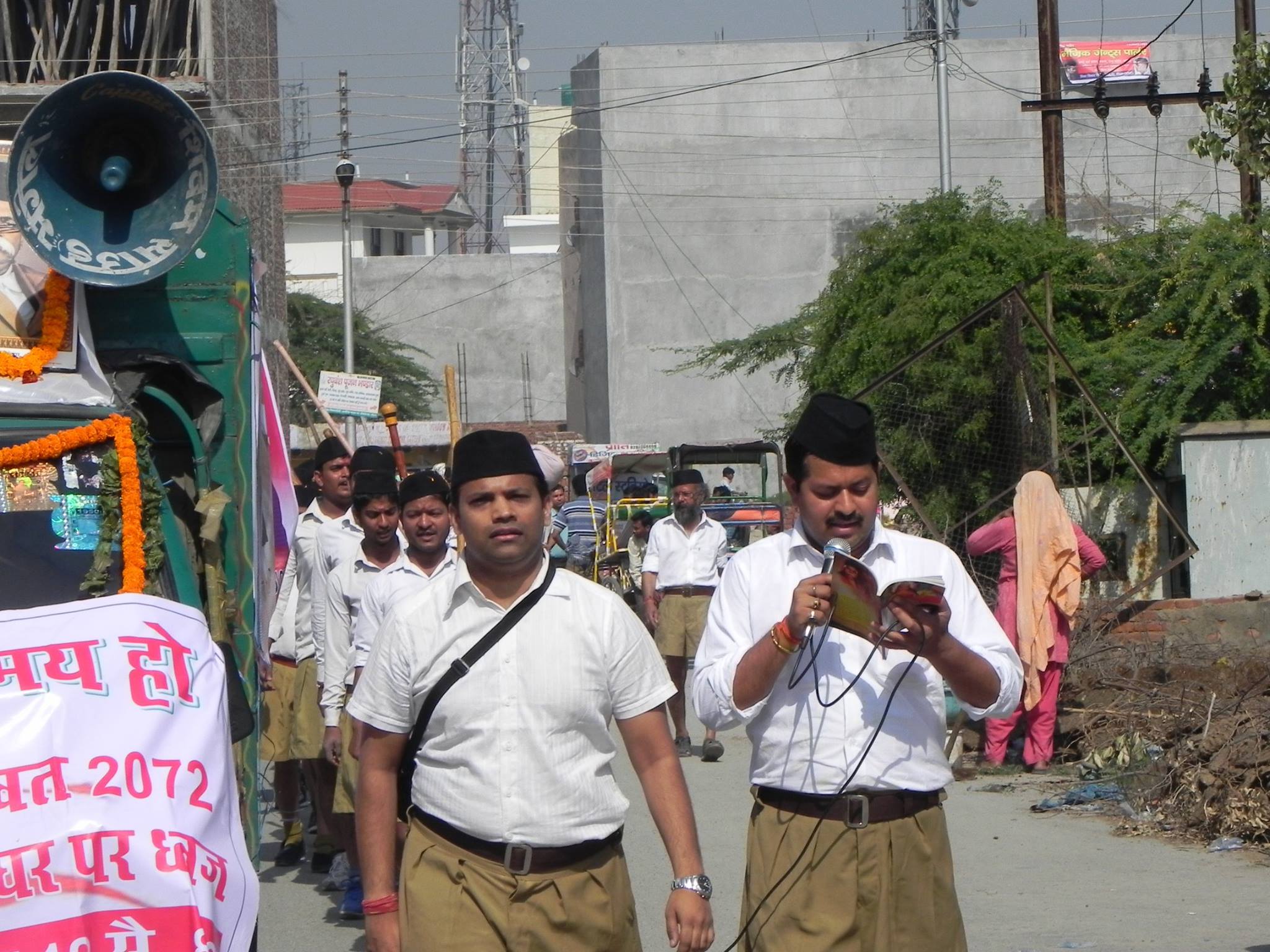 “Today is the birthday of two great human beings who devoted their lives to uniting and awakening the self-pride of Hindu society – the second sarsanghchalak of the Sangh, the revered Shri Guruji (Golwalkar) an Chhatrapati Shivaji”, Shankar’s status update said on February 19, 2017. This entry now stands deleted, as do all his photographs at RSS events. 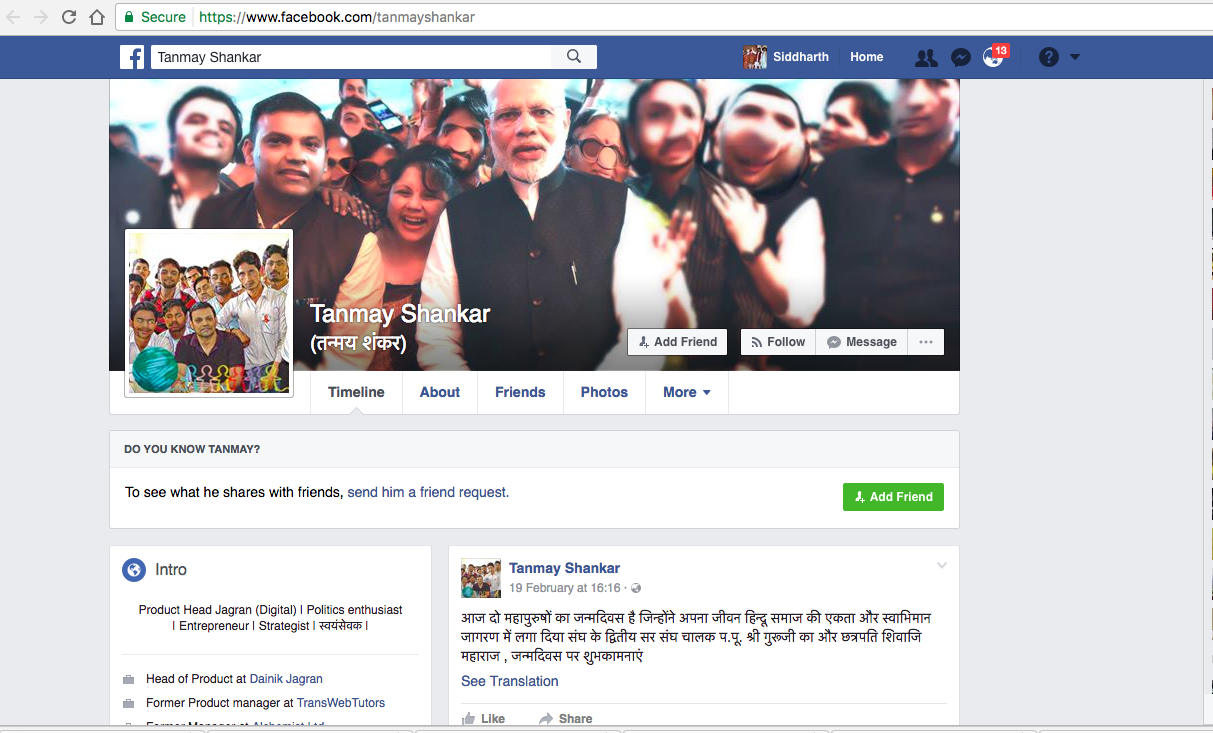 Screenshot of Tanmay Shankar’s Facebook page with February 19, 2017 status update marking the birthday of M.S. Golwalkar, the second supremo of the RSS.

Ironically, the attempt by Shankar to hide his association with the RSS provides a clue to the shadowy forces that appear to have used him as a pawn in their attempt to boost the BJP’s prospects in the assembly election.

Just how crucial was the ‘exit poll’, published in violation of the Representation of the People Act? Consider this analysis by the psephologist Praveen Patil – described by the veteran journalist Vidya Subrahmanyam  as “a self-confessed BJP and Modi fan” – on the way the BJP sought to overcome the disastrous first round:

“On Saturday evening, the 11th of February, when the import of BJP’s underperformance in the Jatland of western UP which went to polls in the very first phase began to sink in, there was a sense of déjà vuabout Bihar 2015 where again the party had begun to possibly stare at defeat from the throes of victory. The degree of underperformance of BJP in phase 1 is debatable, but what made it ominous was this was the zone where a saffron sweep was expected and bad beginnings usually demoralise a political party in lengthy election seasons where micro-news travels very fast among the cadre. Possibly whispers were already being heard among the BJP-Sangh circles on what was going wrong.”

The RSS, Patil wrote on February 21, is “great at organisational level in building strong socio-political networks but fails to win narrative battles that require machinations”. This was where Amit Shah found a solution:

“One man seems to have understood this inherent weakness of the BJP and is bringing that much needed strategic depth to the organisation. Thus on that Saturday evening, after phase 1 of Uttar Pradesh, BJP simply did not let go unlike Bihar. Instead it fought back at every level. For instance, there were widespread media reports in the Hindi medium about “BJP sweeping western UP” with even ‘leaked exit polls’ that went viral in the WhatsApp universe along with a strong message of the party’s intent. Cadre morale was not allowed to sag, especially in those areas that were to immediately follow by insulating those networks. Also what we could notice was that the campaign in Lucknow and Kanpur, the 2 big cities from where information generally flows down to smaller towns was redoubled with virtual carpet bombardment. For instance, a day before 2nd phase polling, in the Azam Khan stronghold of Rampur there were widespread WhatsApp messages of “90% Hindu consolidated turnouts” happening all over UP which mostly quoted sources from newspapers of Lucknow. Amit Bhai Shah had learnt his lessons after Bihar and he was not going to take it lying down.”

“I don’t know if Mr. Patil has inside knowledge, or he was simply guessing,” Vidya Subrahmaniam, who first drew my attention to his piece, wrote on March 7, “but what he has to say correlates with what happened from the second phase onward. In fact, I was in west UP when Dainik Jagran published a fake poll showing huge numbers for the BJP in the first phase where, contrary to the poll numbers, the party was widely seen to have lagged behind its rivals. The driver of my cab and several people we met quoted the poll approvingly, though it was taken down almost immediately on the EC’s orders.”

Was the illegal, “leaked exit poll” that Dainik Jagran ran part of the Sangh and BJP strategy of not taking a possible electoral debacle “lying down”?  Who is the mysterious ‘Sunil R’ who funnelled the poll to a loyal RSS dupe who was working in the newspaper? Who convinced Sukriti Gupta and Sanjay Gupta – the Jagran group’s owners – to defy the law by running the poll?  The hapless Tanmay Shankar has since been moved out of the newspaper to another one of Jagran-MMI’s properties, thebakerymart.com. But he has left behind enough crumbs for the Election Commission and UP police to crack this case – if they really want to.