While Arvind Kejriwal sought a meeting with the chief election commissioner over the issue, the Congress has demanded that the by-elections in the state be conducted using ballot papers. 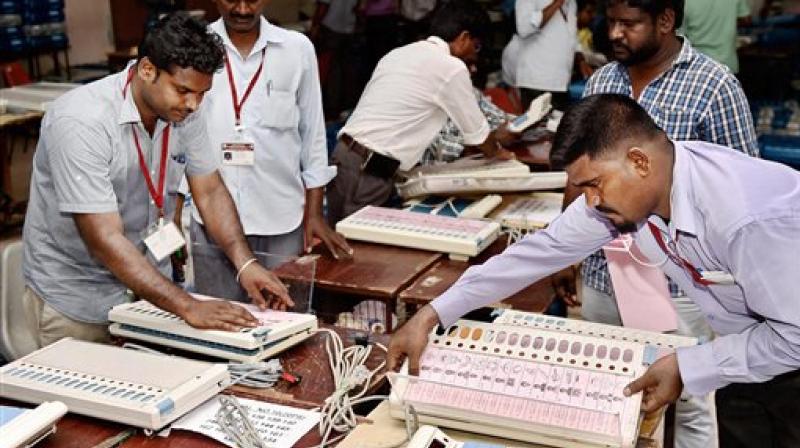 The controversy around the ability of political parties to rig elections by tampering with electronic voting machines (EVMs) erupted again on Saturday (April 1) following a report emanating from the Bhind district of Madhya Pradesh. Reportedly, a voter-verifiable paper audit trail (VVPAT) machine attached to an EVM there had during a demonstration shown that the vote had gone to BJP, whose ‘lotus’ symbol was placed against number one, after a different number was pressed.

As the local media reported the incident, which took place when the state chief electoral officer Salina Singh was conducting a review of the preparations for the assembly by-election due to be held in Bhind next week, and the report went viral on the social media, several political parties who had in March expressed apprehension about elections being rigged through manipulation of EVMs, latched on to the development.

Delhi chief minister and Aam Aadmi Party leader Arvind Kejriwal was the first to share a tweet about a Hindi national daily’s story on the episode. The story mentioned how when Singh was inspecting the voting demonstration, the EVM was found to be dispensing slips only of the BJP.

Videos of Singh’s visit to the centre also went viral soon after. It showed Singh, clad in a yellow saree and surrounded by several other officials, observing the demonstrations. As the officials tried to assess the accuracy of the machine by pressing the number four button on an EVM, which had Samajwadi Party’s name against it, to their surprise they discovered that the paper receipt showed the vote had, in fact, gone to BJP, whose election symbol, the lotus, was placed against the number one button.

The video also showed Singh urging the reporters not to report the episode and telling them that doing so could land them behind bars.

Kejriwal not only retweeted the story but also sought a meeting with the chief election commissioner (CEC).

The Congress also sought an appointment with the CEC and demanded that the by-elections in Madhya Pradesh be conducted using ballot papers.

Speaking to the media after visiting the CEC along with other senior party leaders including Manish Sisodia and Ashutosh, Kejriwal said, “Yesterday’s incident has proved that ECI’s claim that their machines cannot be tampered with was wrong”. He said, “It was obvious that the machine’s software had been changed”.

Aam Aadmi Party activists also held a protest demonstration at the office of the chief electoral officer in Bhopal. Meanwhile, the party tweeted that Kejriwal had said it would be wrong to say that the machine had gone out of order and asked that if it was indeed faulty, would it have only favoured the BJP.

It also tweeted that the AAP leader had described the incident as “hair raising” and wondered if fair elections were indeed taking place in the country.

Kejriwal said that after reports of similar issues had come from Assam and Madhya Pradesh, did anyone bother to check if the software of these machines had been changed. He demanded that there be a technical probe into all the three incidents to see if the software had been changed. He also demanded that that the paper trail through VVPAT be introduced all over the country.

Following the announcement of the assembly election results on March 11, several political parties had alleged that EVMs had been tampered with during the voting. Bahujan Samaj Party leader Mayawati was the first to raise the issue and ask for re-elections in Uttar Pradesh after BJP swept the state.

Kejriwal had also alleged EVM tampering during the Punjab assembly elections. He had claimed that it was due to EVM tampering that 20-25% vote share for AAP was transferred to the SAD-BJP alliance and demanded that the Election Commission count slips of VVPAT and match them with figures from the EVM results. Subsequently, Kejriwal and AAP had also demanded that the elections to the municipal corporations in Delhi be held with ballot papers.

The Election Commission had, however, rejected Mayawati’s demand for fresh elections and termed all allegations against EVM tampering as “wild and baselesss”.

Incidentally, this is not the first time that such a controversy has erupted. In April 2014, a similar incident was reporter from Assam when a machine was found to be voting for the BJP no matter in whose favour the vote was cast.

Late on Saturday evening, the Election Commission stated that in view of the representations made before it by the Congress, it has decided to depute a three-member team led by Bhanwar Lal, CEO of Andhra Pradesh, and comprising senior principal secretary R.K. Srivastava and principal secretary Varinder Kumar, to supervise the by-elections in MP and ensure implementation of all administrative and security instructions of the ECI for the conduct of elections.

As for the allegations levelled by the Aam Aadmi Party, the EC stayed clear of the controversy and only stated that “to ensure the correct functioning of EVMs and VVPATs being deployed in the two ACs, the commission has also decided to depute two teams of officers of the commission along with technical experts.”

“The integrity of the EVMs and the VVPATs to be used in the poll will be demonstrated to the complete satisfaction of all stakeholders by the team. These teams will remain in the assembly constituency till the counting is over,” it said, adding that the Commission was committed to conduct entire electoral process transparently, fairly and to the complete satisfaction of stakeholders, including the voters.

While not naming AAP anywhere in its press note, the Commission said it “will always hear and redress genuine and credible suggestions from stakeholders to further strengthen the electoral system”.