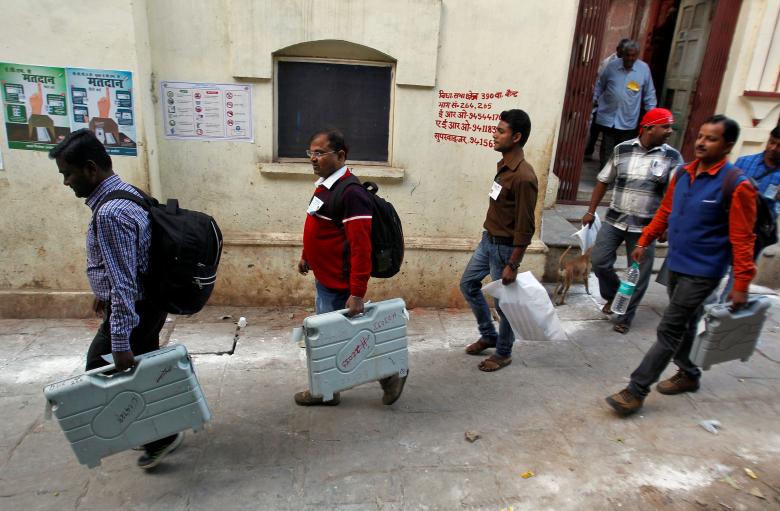 To prove the credibility of the electronic voting machines (EVM), the Election Commission on Saturday (May 20) announced its decision to conduct the ‘EVM Challenge’ from June 3. It invited all those political parties which had participated in the assembly elections held earlier this year to take part in it. All parties will be allowed three people each to evaluate and assess the machines. The commission held that no foreigners would be allowed in the exercise. The outcome will be judged by a team of technical experts working independently with a panel.

The commission announced its decision at a press conference addressed by chief election commissioner Nasim Zaidi, who was accompanied by several senior officials including election commissioner A.K. Joti, at Vigyan Bhawan. At the venue, a demonstration of EVMs and the voter verifiable paper audit trail (VVPAT) system was also organised for the media in which both the manufacturers, Bharat Electronics Limited (BEL) and Electronics Corporation of India (ECI), demonstrated the safety aspects of the machines while Election Commission officials explained the security aspects from manufacturing to counting votes and subsequent safekeeping. An audio visual presentation on EVMs and the VVPAT system was also made prior to the press conference.

Noting that the commission has “no favourites” and maintains “equidistance” from all parties, Zaidi said the participants in the EVM challenge will have to prove that the machines can be tampered with under the laid down technical and administrative safeguards.

He said the challenge would be conducted in two formats.

Challenge Statement I will be used by parties to show that the EVMs used in the assembly elections in 2017 were tampered with to favour a particular candidate or political party by altering the results stored in the EVMs after the polls. The claimants will therefore have to alter the results in the control units “in exactly the same scenario as the EVMs remain within the technical and administrative safeguards of ECI after the poll”.

The participants will be allowed to press a combination of keys on both the control unit and the ballot unit or use any communication tool, such as wireless or bluetooth, to show that changes in the result have been made.

Challenge Statement II, he said, will cover a scenario where the EVMs might have been tampered with before or during the polls in 2017. In this, the challengers will have to attempt to tamper the machines while they are stored and transported and used at the polling stations. Here too, the use of keys and communication would be allowed to make changes.

No change to motherboard, chips would be allowed

The Election Commission clarified that the participants will not be allowed to change the motherboard, as had been been demanded by Delhi chief minister Arvind Kejriwal. In the capacity of an IIT alumni, he had said that he can change the motherboard in just 90 seconds. Zaidi said “as any person with common sense will be able to appreciate, a non-ECI EVM or an EVM with a different ‘internal circuit’ is simply a different machine or look alike of ECI EVM  hence can never be guaranteed by ECI to give correct results.” As such, he said, this scenario was completely ruled out within the ECI administrative safeguards and that’s why it could not be allowed in the challenge.

Zaidi said all parties would be allowed to nominate a maximum of three people to participate in the challenge and they would also be allowed to accompany the EVMs from the warehouses to the commission at New Delhi during transportation.

The parties have been given time till May 26 evening to confirm their participation. Zaidi said every political party will be allowed to choose a maximum of four EVMs from any four polling stations of the five states which had gone to polls to prove their contention within a period of four hours. However, EVMs involved in election petitions or those sealed on the orders of courts will not become a part of the challenge.

Before the challenge the participants would be required to disclose the button number they would be pressing so that there is no confusion during the exercise. All key presses, he said, will be made within the clear and unhindered view of the Election Commission and the process will be recorded by cameras. The buttons will be pressed with a “specially designed presser: so as to avoid any ambiguity.”

Moreover, Zaidi said the challenge would be deemed to have “failed” if the EVM’s become non-functional after the tamper attempt; the results displayed on the control unit match the stored Election Commission declared results; if the challenger violates any of the guidelines for challenge; or if the challenger withdraws from the challenge.

Zaidi spoke about how the Election Commission of India was globally acknowledged as the ”gold standard” in conducting elections and how it has conducted 107 assembly elections and three Lok Sabha elections with EVMs in the last 20 years. He said since September 2013, VVPAT machines have also been used in various elections and in a meeting with all parties on May 12 this year it was decided that they would be used in all future assembly and parliamentary polls. He later declared that even the Gujarat and Himachal Pradesh assembly elections would be conducted using them.

More time for VVPATs under consideration

Zaidi said a demand has also been made by political parties for increasing the time for which the vote is visible on VVPAT machine from 7 to 15 seconds and it was under consideration.

The chief election commissioner said when in March this year some doubts were raised about the functioning of EVMs following the declaration of results for the five assembly elections, the commission had asked the parties to “provide evidence and credible material information supporting the claims”, but had received none from them so far.

Zaidi also reiterated that charges pertaining to EVM and VVPAT functioning inordinately during demonstration at Bhind in Madhya Pradesh and Dholpur in Rajasthan had been found to be false. Similarly, he said, allegations made by a candidate during Maharashtra municipal polls that he did not get a single vote were proved wrong following investigation.

Zaidi hoped that with the coming of VVPAT – for which orders have been placed and money paid to BEL and ECIL – the confidence and trust of voters will be enhanced. “Use of VVPATs with EVMs must conclusively put to rest all misinformed doubts and misgivings regarding EVMs. It will also be a matter of pride that India will become the first country to deploy 100% VVPATs or paper trail in the world, an element that was missing in many countries including Netherland, Germany and Ireland,” he said.

On why the Indian EVM system was more reliable than those operating abroad, Zaidi said it is because in India the EVMs are not manufactured by any private company but only by two public sector enterprises BEL and ECIL. Moreover, he said, there is an elaborate technical security, administrative and security system in place for ensuring their safety and security at all time. Due to this, he said, Supreme Court has also upheld their use while in Germany it was disallowed by a court.

Why it cannot be hacked

The chief election commissioner said the EVMs cannot be hacked because they are stand alone machines and not connected to the internet or any other network. Also, since they do not have any frequency receiver or data decoder for wireless, they cannot receive any coded signal by wireless and therefore cannot be tampered with using wireless, Wi-Fi or bluetooth device.

He also ruled out “manipulation at manufacturing stage” stating a “stringent security protocol regarding the security of software” was followed. Moreover, Zaidi said at the time of manufacturing how would a company know which candidate would stand for which party in a future election.

The chief election commissioner said results cannot also be altered by activating a Trojan Horse through a sequence of key presses because it cannot be inserted into the software code of the EVMs burnt into the micro-controller chip since the chip is programmable only once. Further, pressing additional keys on the ballot unit is not sensed by the control unit.

Zaidi also spelt out the other security features of EVMs saying “new M3 EVM produced after 2013 have additional features like tamper detection and self diagnostics. The tamper detection feature makes an EVM inoperative the moment anyone tries to open the machine. The self diagnostic feature checks the EVM fully every time it is switched on. Any change in its hardware or software will be detected.”

Zaidi said contrary to allegations, the Election Commission also does not use any EVMs produced abroad. He said even the software program code is written in-house by these two manufacturing companies and not outsourced. It is approved by the Technical Evaluation Committee of ECI. The software programme is converted into machine code by manufacturers and only then given to the chip manufacturers abroad since the election commission does not have adequate capability of producing semi-conductor microchips within the country.

With every microchip having an identification number embedded into memory and the producers placing their digital signatures on them, he said, the question of their replacement does not arise. However, Zaidi noted that since these companies are providing EVMs to some foreign nations like Namibia, Nigeria, Nepal and Bhutan, the Election Commission would also take steps to ensure that these exported machines are also not misused ever.