The BJP Now Has Absolute Power in UP. Brace Yourself for the Aftershocks.

If the party's success in using communal polarisation to build political support becomes the template for governance, the state and country are headed for dark days 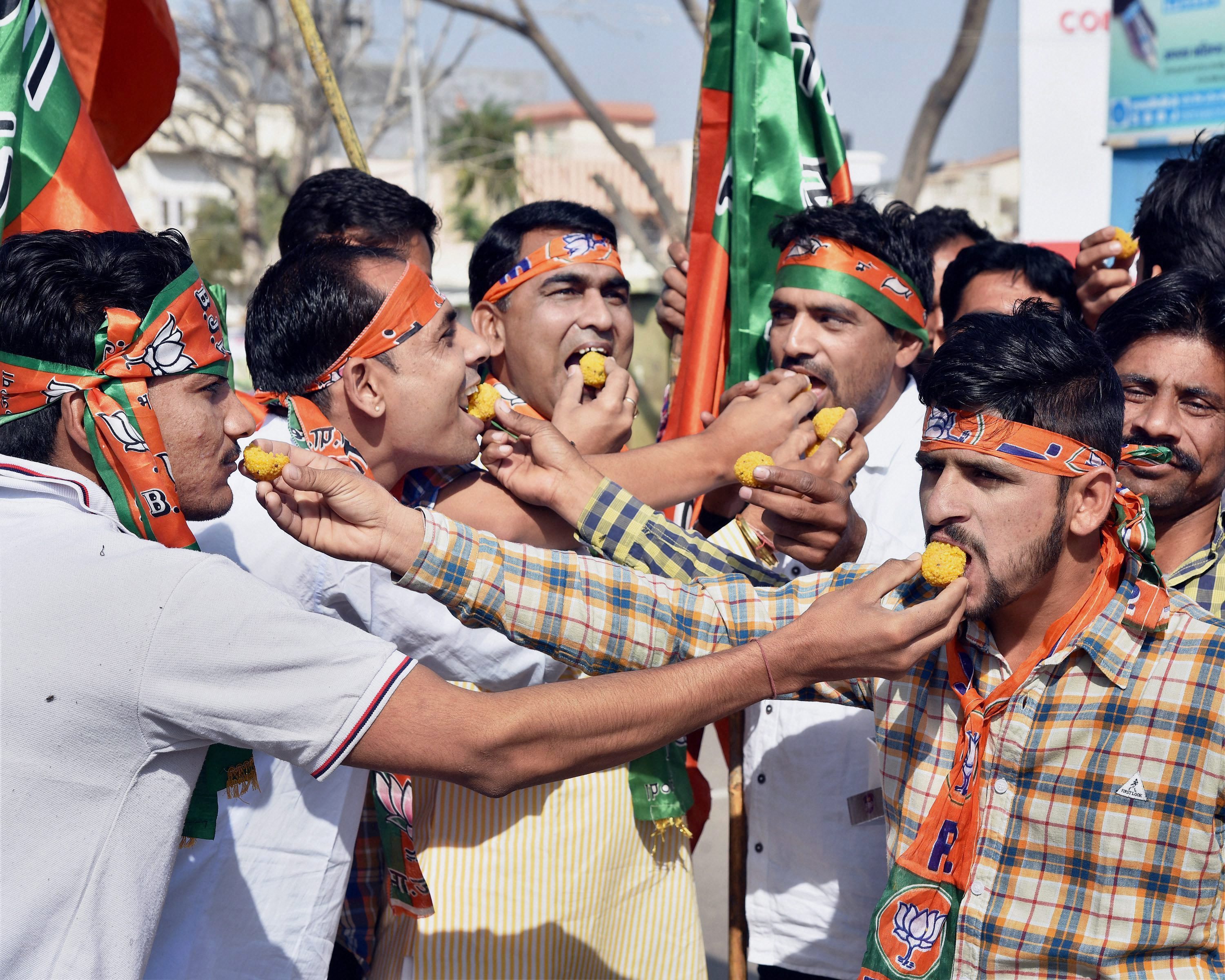 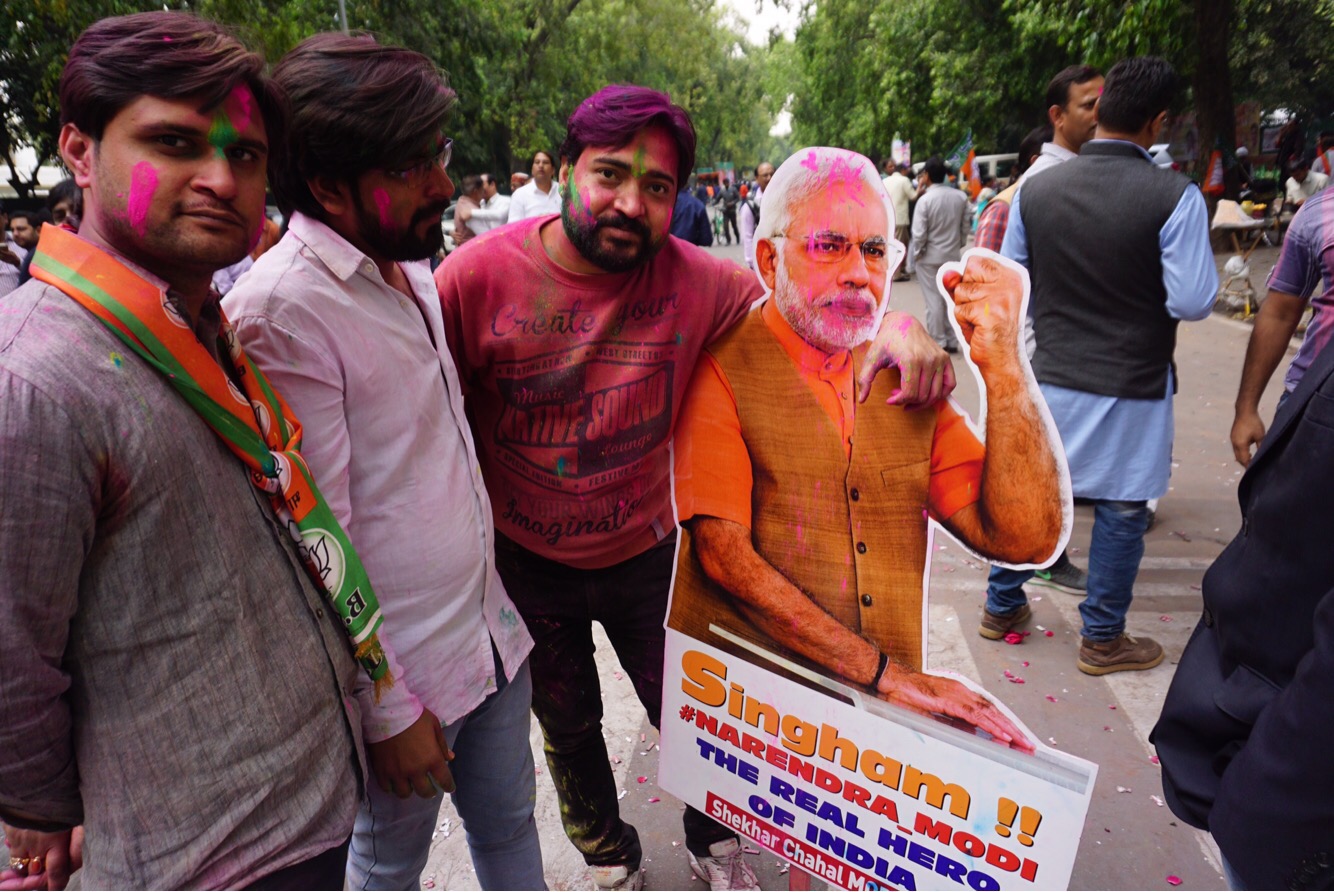 BJP supporters and workers celebrate the party’s victory in the assembly elections at party headquarters in New Delhi on Saturday. Credit: Shome Basu

In the Lok Sabha elections of May 2014 which he fought in the style of an American presidential election, Narendra Modi won 42.6% of the popular vote in Uttar Pradesh. Two years and ten months later, his support base in India’s most populous state – where he again made a presidential contest out of an (assembly) election – remains intact. He may not have done much at all to deliver on the promises of development that so swayed the electorate then; but set against the parlous five-year record of the state’s Samajwadi Party government, Modi’s promise of development proved more credible and appealing to the largest section of voters than either of the two alternatives. The BJP’s vote share at 39.6% is well ahead of the Bahujan Samaj Party’s 22.2%, and the Samajwadi-Congress alliance’s vote share of 28.2%.

Looked at from the prism of the state, this represents a stunning reconfiguration of the political order. In 2012, the BJP had polled just 15% of the votes, while the SP won 29%, the Congress 11.6% while the BSP polled 25%. These percentages fell sharply in 2014 for the three anti-BJP parties and it is only the BSP that has managed to recover a little though still falling short of its 2012 performance. In other words, though the result is a setback for all the non-BJP parties, it is the SP and the Congress that have been hardest hit.

The result is undoubtedly a personal blow to Rahul Gandhi, who decided to join hands with the SP and then failed to capitalise on the alliance. By accepting junior status, the Congress signalled the end of its attempts to revive itself in the state; to do so and then lose so dramatically raises a question mark on the heir apparent’s political acumen.

The other heir apparent, Akhilesh Yadav of the SP, finds himself in an even more unenviable position. He took a gamble by rebelling against his father and uncle and splitting the Samajwadi family on election eve. But if his rebellion helped wash the taint of corruption and goondaism that those familial associations brought, the goodwill it generated was not enough to make up for the lost years in which the state was run and ruined by ‘four and half chief ministers” – Mulayam Singh Yadav, Shivpal Yadav, Azam Khan and Ram Gopal Yadav, with Akhilesh being the “half”.  More than 60% of the state’s voters went against Akhilesh and his government. That is a resounding comment on the SP’s misgovernance by any yardstick.

The BJP went into the UP election with an inbuilt advantage – the 42% voter base Modi had built in 2014 and the evident public dissatisfaction with the incumbent state government – but it had several handicaps too. In other states which went to the polls after 2014, the party had found it difficult to secure votes at the same level and there was no reason to assume that UP would be any different. The index of opposition unity had also risen, with the SP and the Congress coming together. In a three-cornered contest, this meant the BJP could afford to lose no more than 5-7% of the vote share it had polled in 2014. The party also lacked a state-level leader around whom both the party cadre could rally and the masses be mobilised. Finally, it was aware of the massive economic dislocation and inconvenience that Modi’s demonetisation decision had caused, particularly for the poor and lower middle class.

The BJP responded to these challenges by doing three things. First, it turned the election into a referendum on Narendra Modi’s leadership, hoping, by doing so, to replicate the magic of 2014. Towards the end of the campaign, it was clear that the prime minister was doing the heaviest lifting, speaking at multiple rallies and spending three days in Poorvanchal.

Second, the party and its leaders freely resorted to communal appeals and agendas in the campaign with even Modi cleverly stoking the average Hindu’s misplaced sense of being discriminated against. The BJP’s unwillingness to field even a single Muslim candidate in the state was intended to reinforce the clear message that under the party, Muslims would be shown their place. Muslims, who remain physically and economically insecure despite bearing the cross of being “appeased” by the SP, were expected to vote en masse for the SP-Congress alliance in order to check the BJP’s advance. The BJP’s street level campaign made much of this supposed consolidation – which never finally materialised because the BSP too secured the support of Muslim voters in many seats – with its cadres using it as a rallying cry for the polarisation of Hindu votes that they themselves were engineering.

Third, the obvious non-delivery on Modi’s earlier promises of development – jobs, electricity, housing was successfully pinned on the cussed unwillingness of the state government to take advantage of central schemes rather than on any failure by the BJP-led government at the Centre. As for demonetisation, all indications are that the official bluster about the disastrous move being “in the national interest” was taken at face value by a broad section despite the personal hardship many of them went through. Even if they didn’t accept this logic, enough people were willing to ignore the issue or give Modi the benefit of the doubt. At the end of the day, the desire for change in Lucknow trumped all other considerations.

Based on the combined vote share of the three anti-BJP parties, it is true that over 50% of the state’s voters were not swayed by Modi’s potent message of what is being called ‘communalised development’. To suggest, therefore, as Amit Shah has done, that the elections in UP are a victory for “BJP’s ideology” – read: Hindutva – is not just wrong but dangerous. It is wrong because a majority of voters have clearly not been seduced by the party’s communal agenda. And it is dangerous because it provides an early indication of what the BJP might be tempted to do in the state now that it has untrammelled power.

To paraphrase Lord Acton, if ‘power’ communalises, then ‘absolute power’ communalises absolutely. If Modi and the BJP are wielding power in Delhi, in Lucknow they will now have absolute power. We have seen what effect ordinary power in Delhi has had on the Sangh parivar and its affiliates across the country. In Uttar Pradesh, the danger is that the ‘BJP ideologists’ will run away with the agenda. Even if the BJP officially tries to distance itself from the more extreme and irrational actions of these ideologists, their agenda is not without a purpose. In 2017, Modi had an alibi for his failure to deliver on the vikas front – the fact that his party was not in power in UP. What happens in 2019 when that alibi no longer exists and the gap between promise and delivery remains enormous. That is why the Sangh parivar has a vast reserve army of toxic warriors, some of whom have surfaced again. Subramanian Swamy believes the party now has the mandate to push for a Ram temple in Ayodhya; and then there are other leaders with equally unsavoury pursuits like Yogi Adityanath, Sakshi Maharaj, Uma Bharati, not to speak of a whole host of Muslim-baiting MPs and MLAs. Across India – and especially in frontline areas like university campuses where the Sangh parivar is waging a vicious fight against independent thinking – one can expect to see more and more provocations.

The BJP coined the slogan ‘sabka saath, sabka vikas‘ but has yet to denounce the justification of the massacre of Muslims in Gujarat that an RSS leader in Ujjain made in the midst of the UP election. In reality, the slogan has nothing to do with development or inclusiveness but is coded language  telling Hindus that the era of ‘Muslim appeasement’ has ended. This is a core element of the “BJP’s ideology” that Amit Shah said won out in UP.  Muslims in UP and elsewhere in India are already marginalised economically and politically and their apprehension is that things are going to get worse from here on. Narendra Modi, with his rhetoric of graveyards and crematoriums, has contributed to this feeling. But it is the responsibility of the prime minister of India to allay these fears and ensure that the BJP government in the state exercises the power it has ably and responsibly.

An even heavier responsibility rests on the media, a major section of which, unfortunately, believes proximity to power is the hallmark of good journalism. There will be in Uttar Pradesh no opposition to speak of. The challenge of holding the government accountable – to its promises, to the electorate, to the constitution – now lies in the hands of journalists.