In the Face of Dalit Anger, BJP Banks on Caste Fault Lines in Rajasthan

To counter the anti-BJP vote in the 2018 assembly elections, the party is targeting smaller Dalit communities with its campaign. 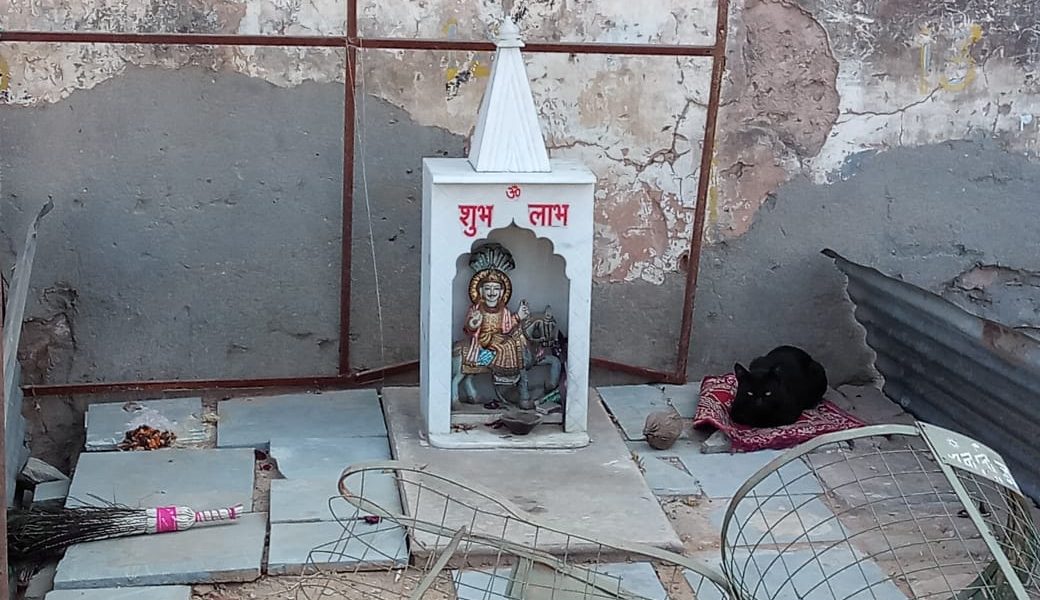 The shrine of Gogaji near Jaipur’s Chauggan Staudium. Valmikis have a long tradition of worshipping this deity linked to the Nath tradition.

Jaipur: By mid-day, Dipesh Jedia, head of Jaipur’s Scheduled Caste Morcha, returns for a small break to his two-room home in Rajmahal ka Talab, a Valmiki colony on Jaipur’s old Amer road. For the past month and a half, he’s been going door to door across the city’s 170 Valmiki colonies, canvassing support for Ram Charan Bhora, the sitting MP and BJP candidate from Jaipur city.

From an old Jan Sangh family, as a child Jedia used to accompany his father to BJP meetings.  “We’re a community that does for everyone what only a parent will do for a child, clean maila (dirt), but we’re also proud Hindus,” he says by way of explanation.

Jedia is referring to the wide-scale agitation that broke out in April, shortly after the Supreme Court’s order to amend the SC/ST Act.  These were Dalit protests like the state had never seen, followed by a harsh police crackdown which only intensified Dalit anger against the government.

In November 2018, as I travelled across Rajasthan, especially its eastern regions which have a sizeable Dalit population, it was clear that the dominant Dalit communities were voting for the Congress. A month later, this was borne out in the results. In the 2018 assembly elections, the BJP got only 12 out of the 34 reserved seats, a dramatic fall from the 32 it had got in 2013.

Also read: In Rajasthan, BJP Rides on Past Victories as Congress Experiments

The Congress is now banking on this Dalit vote for the Lok Sabha elections. Apart from the four reserved SC seats – Ganganagar, Bikaner, Bharatpur, Dholpur-Karauli – the Dalit vote impacts outcomes in at least nine other general seats. The Congress expects to do well in these.

This threat has made the BJP redouble its Dalit outreach – targeting smaller communities like the Valmikis or Khateeks, who have traditionally been its voters, by continuously exploiting their sense of being politically underrepresented or marginalised within the wider Dalit fold. Jaipur’s Valmiki colonies become a good example of how this unfolds on the ground.

“Mayawati only supports Jatavs, the Congress also favours either Jatavs or the Meghwals. The BJP is the only party that raises our issues,” says Rajendra, who works for the municipal corporation.

At 24% of the Dalit population of Rajasthan, the Jatavs are the largest group, followed by the Meghwals, a community concentrated in the western region of the state. Both are politically better represented, economically and socially better off, and more vocal than the Valmikis.

“We are untouchables even for those who are considered untouchables by others (Hum voh hain joh baaki achoot bhee achoot maantey hain),” Jedia tells me. The BJP works this fault line. Over the past month, the Valmiki colonies have been buzzing with high-profile visits from senior BJP leaders like Prakash Javadekar and Amit Shah.

Most evenings, there are innumerable dharm sabhas conducted by the RSS and its affiliate groups at various Valmiki colonies. Jaipur’s Rozgareshwar Mahadev Temple, which was demolished under BJP rule and then became a cause for the RSS and other right-wing groups.

Everyone here speaks of the viral video which shows the prime minister washing the feet of safai karamcharis at the Kumbh Mela. “For the first time ever, a prime minister has bent down, washed the feet of workers of our community, those who are shunned by everyone else,” says Shakuntala Devi, an anganwadi worker .

Dharmendra Jatav, a prominent Dalit activist, calls this the RSS’s ‘divide and rule strategy’. According to him, ever since the April protests that united the Dalit community, the RSS “has been worried and has stepped up its dharm rajniti”.

He points to the politics that was at play in the BJP’s ticket distribution. In two reserved seats – Bharatpur and Dholpur-Karauli – where the Jatav population is as high as 18%, the BJP’s strategy is to field non-Jatav candidates  – a Khateek from Dholpur and a Koli from Bharatpur.

“The BJP pretends this is about empowering the smaller Dalit communities, but it’s actually designed to break them away from the Jatavs. Also, it gives general castes a weaker, non-Jatav candidate to rally behind to check the rise of a stronger and more assertive Jatav candidate.”

Recently, in Bikaner, a BJP leader caused controversy when he asked all other castes to unite against the Congress’s Meghwal Dalit candidate.

But there is still no surety that this BJP strategy will have the impact the party seeks.

Also read: How the Bharatiya Tribal Party Is Making Its Mark in Rajasthan

“The BJP is working on it but the Dalit anger is still alive,” says Anil Bairwa, head of the Dr Ambedkar Memorial Welfare Society, a non-government trust which runs a hostel for Dalit students in the heart of Jaipur. “Dalits feel that they will be worse off than Muslims under the BJP if reservations are diluted.”

Pawan Pacherwal, an engineering graduate from the Valmiki Colony in Purani Basti, is among those not convinced by the BJP’s rhetoric. Though his family is staunchly BJP, he says he’s a Congress supporter, impressed by Rahul Gandhi and keen to work for the party. But even he cannot cut himself off from the politics of religion that local BJP leaders exploit so adroitly. Just last October, Pawan was roped in to celebrate Valmiki Jayanti in a grand manner at their behest.

They were only building on an earlier mobilisation. In 2015, the iconic Rozgareshwar Mahadev Temple, in the heart of Jaipur’s old city, was demolished to make way for the metro. This led to massive protest rallies by the RSS, which served as an expression for the outrage across the city. Ironically, while the demolition was carried out under the BJP government, it became a rallying cry for right-wing assertion.

The RSS, along with other Hindutva groups, insisted the temple be reconstructed at the very spot it stood earlier and symbolically chose a Valmiki to lay the foundation stone.

“It was recognition that Valmikis are the first defenders of Hinduism,” says Pawan with pride.

Pawan concedes that while backwardness and unemployment are fundamental issues for the community, the importance of pride and identity for a group that has for centuries carried the stigma of its profession cannot be underestimated.

“Local BJP leaders like Dipesh Jedia,” Pawan says, “understand this well and get actively involved with movements such as  the ongoing attempt by the Valmiki community to refurbish the shrine of Gogaji near Jaipur’s Chauggan Staudium.”

Valmikis have a long tradition of worshipping Gogajji, a folk deity linked to the Nath tradition. Every monsoon, Valmikis from across the country visit Gogaji’s ‘samadhi’ in Hanumangarh to celebrate Goga Navami. “Jedia has assured us that win or lose; his party and other Hindu sangathans will help us with our Gogaji movement,” Pawan says, and adds that the Congress doesn’t have local leaders who work on the ground and listen to what the community wants.

He is not alone, many others echo this sentiment. According to Dharmendra Jatav, “The seats the Congress wins this time will be because the Dalits are angry with the BJP, not due to any work they’ve done on their own.”

All images by Radhika Bordia.