In Western UP, This Farmer Leader Wants to Revive Jat-Muslim Unity to Take on the BJP

Ghulam Mohammed Jaula, an 82-year-old BKU veteran, has been repeatedly urging Jat youth to not "get taken in by Modi again". 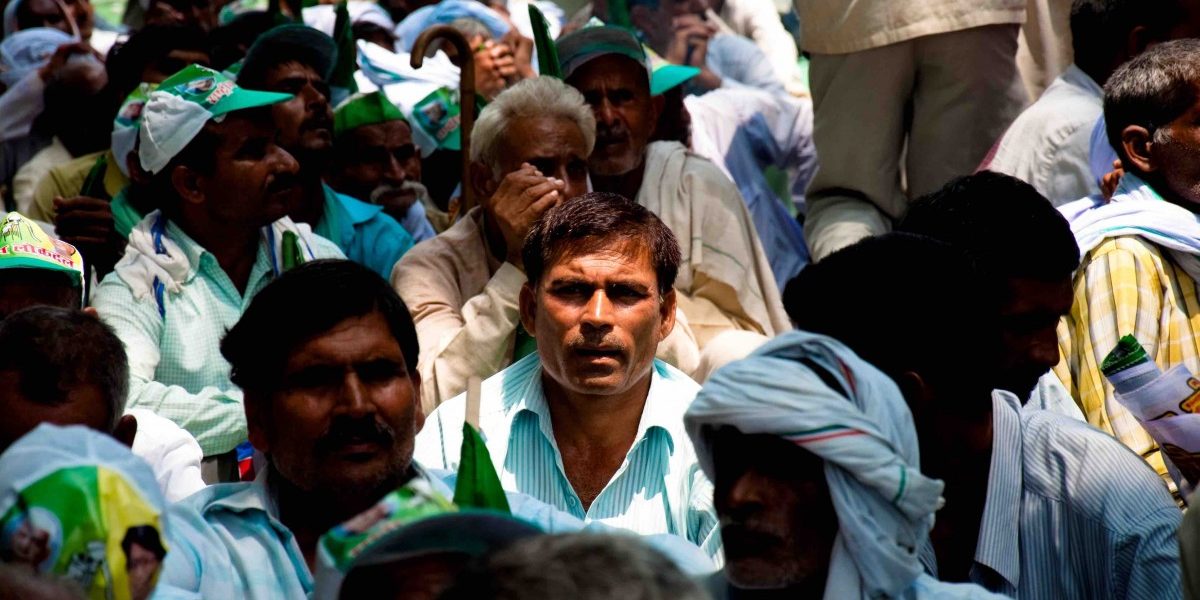 Muzaffarnagar: On April 11, when eight seats in western Uttar Pradesh go to the polls, Ghulam Mohammad Jaula will be closely tracking at least half – Muzaffarnagar, Baghpat, Kairana and Mathura. “It gives me great satisfaction to think that the BJP’s defeat will be scripted by farmers,” Jaula says with great certainty.

For this tall and robust 82-year-old, these elections offer the possibility of the revival of a social matrix he thrived in – one in which the landowning Jats and Muslims sit together and decide the politics of the day. He has returned to the political arena to warn the Jat youth that they must not “get taken in by Modi again”. He and his old compatriot, Tejinder Singh tell the young voters, “Remember Baghpat, not Balakot when you vote.”

Jaula’s story maps the history and politics of this agrarian belt. He has witnessed the slow unravelling of an interlinked society in which shared interests bound together Muslims and Jat farmers – a phenomenon that only became evident to the outside world during the Muzaffarnagar riots.

Now the anger has somewhat ebbed, and common economic interests have once again come to the fore.

Also read: Muzaffarnagar Riots: In the Denial of Justice, Politics is Never Far Behind

Jaula is nostalgic for a past when as a prominent Muslim member of the Bhartiya Kisan Union (BKU), he would travel across the country with the group’s founder Mahendra Singh Tikait, affectionately called ‘Baba Tikait’. It was the early eighties, a time when the popularity of the BKU was at its peak. 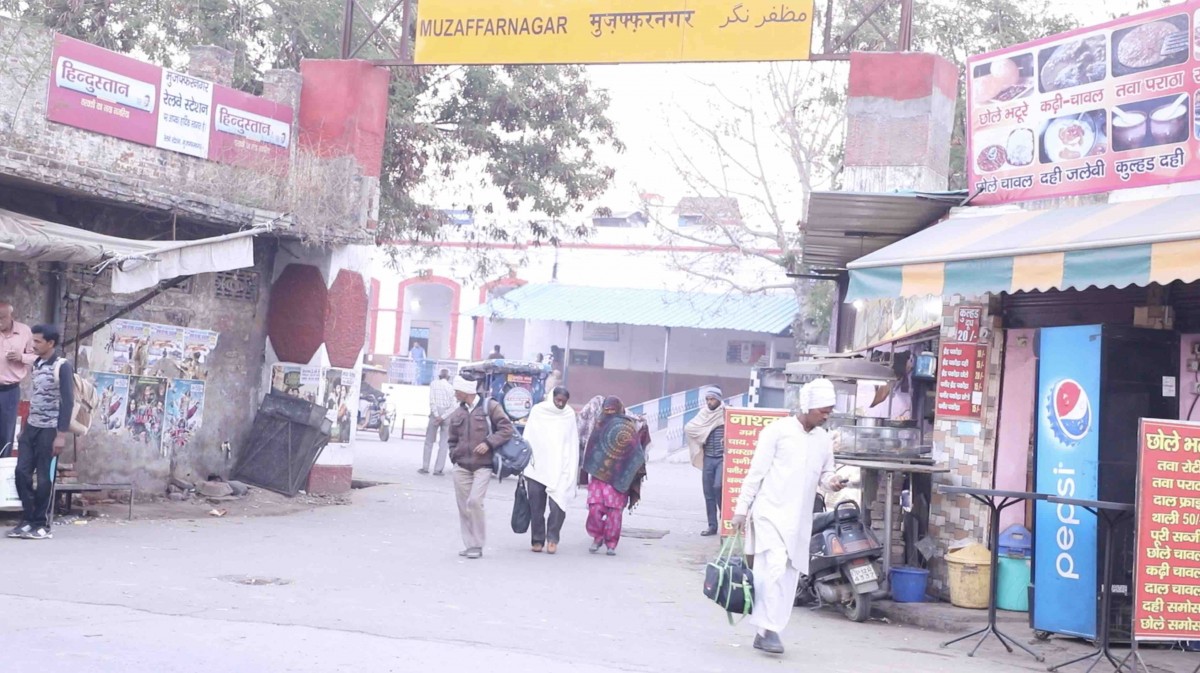 The Muzaffarnagar riots were the final blow to deteriorating Jat-Muslim relations in the region.

He describes how Muslim and Jat farmers sat together on long dharnas protesting the power hikes. The success of the BKU in forging Jat-Muslim unity through such non-partisan efforts has been well-documented. Jaula says with a sense of loss, ‘Voh kisanon ka sangathan tha, Hindu-Muslim ka, aur Centre ki sarkar se apna loha manwatey the (It was an organisation of farmers, Hindus and Muslims, and it could make the Central government bend to its will). ‘

However, these bonds began to fray when urbanisation changed the village economy, and the mutual dependence between communities decreased. Other – more overwhelming – forces from the outside found a home here. BKU’s support to the Ram Mandir movement alienated several of its Muslim members, but the increasingly fragile bonds managed to survive until 2013 – when the final blow came in the form of Muzaffarnagar riots. The episode tore apart the two communities in a way that seemed irreversible. 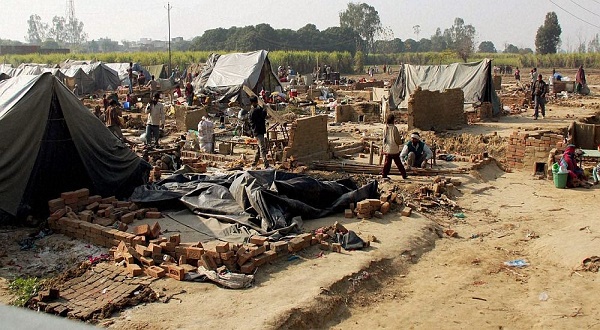 A camp for those displaced by the Muzaffarnagar riots. Credit: PTI/Files

In the aftermath of the riots, Jaula had briefly spoken to an NDTV team in the village whose name he bears – Jaula, in Budhana district. He was shattered and bewildered that the Jats had turned against the Muslims. At the time he strongly denounced the BKU as well as Tikait’s sons for not supporting the beleaguered Muslim community and began working for the rehabilitation of the victims.

He was then expelled from the BKU and soon after formed a new organisation – the Bhartiya Kisan Mazdoor Manch. The group’s secretary, Shahnawaz, who was from the Samajwadi Party, represented the emerging voices among the Muslim youth at the time. He told NDTV that ‘Jat-Muslim unity was history’. For Shahnawaz and many of the younger Muslim members of the Manch, their main agenda was to build a new social and electoral equation which would unite lower caste Hindus and Muslims to confront Jat domination.

Though Jaula was made the president of the new Manch, his heart was not in it. He struggled with a reality in which he would no longer work with the region’s Jat leaders but would be pitted against them. Jaula would repeatedly defend all those he had worked closely with, shifting the blame for the changing equations on to the BJP.

“Jat pehley bahut achey or secular bhee the. Wo chahey unkey elakey main 10 Muslim bhi rehtey ho to wo unkey liye masjid bhi banvatey the. Humko to ab afsos is baat ka hai ki ab Jat ko kyu gussa nafrat hai Muslims ke khilaaf. Ab ye BJP ki den hai (The Jats were secular once. Even if only ten Muslims lived in their locality, they would build a mosque for them. I regret the anger and hatred the Jats feel for the Muslims now… This is the doing of the BJP).”

Role of the Rashtriya Lok Dal

Through these elections, he seeks a return to the politics of social cohesion that he is most comfortable with, cemented by the agrarian politics of another icon of this region – the original Chaudhary sahib of this region, Charan Singh. Jaula says Charan Singh’s son, Ajit Singh’s Rashtriya Lok Dal (RLD) could now ensure the defeat of the BJP.

Jaula knows Ajit is not the same as his father, ‘He’s a dal badlu’. He is also quick to note that Ajit had allied with the BJP in 2009. But ultimately, he adds, Ajit is a farmers’ leader, “Both baap-betey (father-son) have worked hard and are raising the issues we’re facing.” 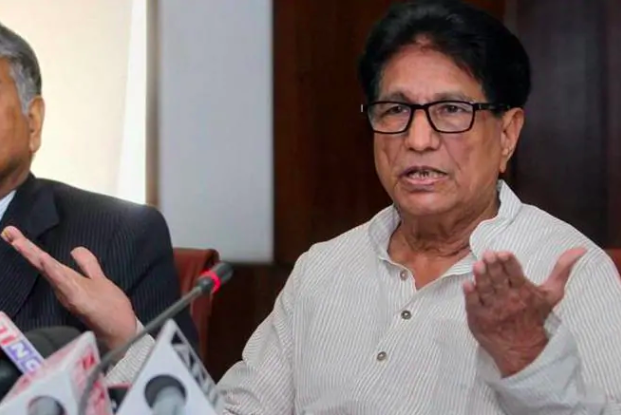 This politics based on shared interests has to cope with much stronger opposition than it has ever before. Jaula concedes that Modi’s popularity continues to shine through in the views and voices of many within the Jat community, especially the young. Similarly, the younger Muslims do not share a natural bond with the Jats. They have grown up against a backdrop of violence, the communal speeches of a Sanjeev Balyan, or a Sangeet Som, the hype about ‘love jihad‘, the lynchings in the name of the cow and the targeted encounter killings. They will support the RLD, not out of some shared bonds with the Jats but only to ensure the BJP’s defeat.

Also read: Understanding the Caste Politics Behind the Jat Agitation

In the face of this challenge, Jaula has teamed up with Tejinder Singh, a pradhan from nearby Icchawa village. These two elders have not formally been a part of any political organisation, but they go to every nukkad sabha called by the RLD. Even as they urge the other gatbandhan parties to campaign more aggressively, they see their main task as ensuring that the Jat youth don’t get taken in by Modi yet again.

Tejinder Singh tells us, “We explain the real issues of our region to them, tell them it is ganna not Jinnah (an old slogan that emerged in the Kairana by-poll). When we went to the constituency of Jayant (Ajit Singh’s son), we told the chorrhey (the young men), ‘remember Baghpat, not Balakot when you vote.'”

Before turning in each night, the two men share a hookah and take stock of the day – ‘80% of the Muslims are with Ajit Singh, 80% of the Dalits are with him and so are 80% of the Jats, but we have to make sure they don’t get taken in by Modi again.’

The two believe that they could succeed in their message, “Hindus and Muslims sat together on dharna for the past two years over issues related to sugarcane in the same way they did 40 years ago. This will show its effect in the 2019 elections.”

Jaula then does the arithmetic, “Once the Muslims and the Jatavs come together and Chaudhary sahib wins over a large chunk of the Jats, I may see the past come to life again before I die.”