BJP, Its Allies Ahead in Majority of 25 Northeast Lok Sabha Seats 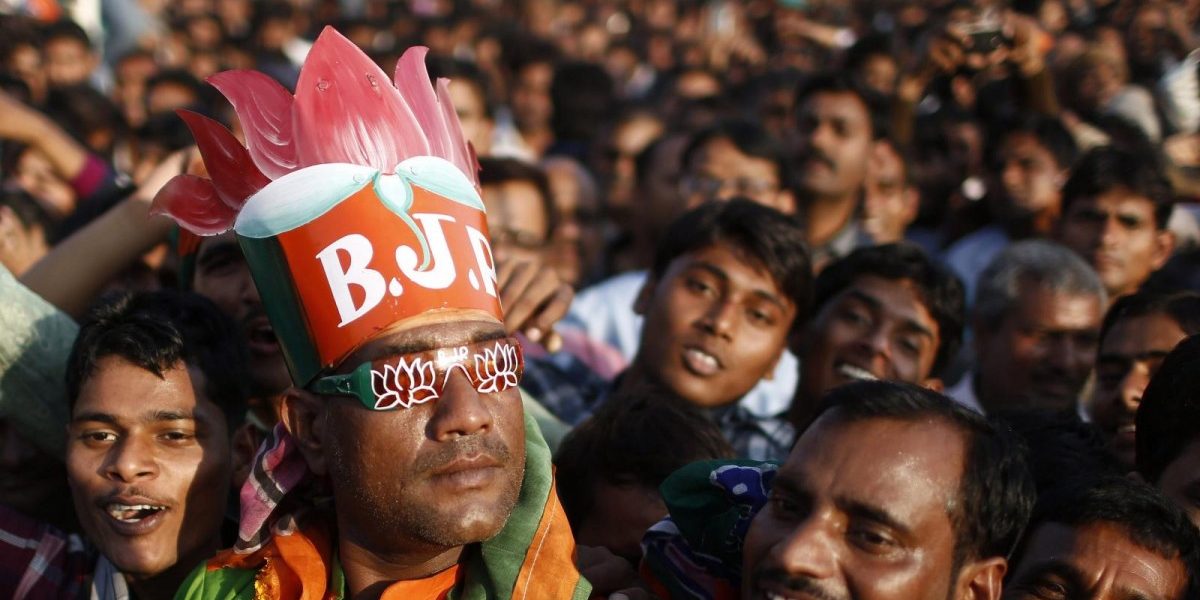 New Delhi: The latest updates coming from the Northeast have strongly indicated that the electoral reach of the Congress in the region has been further reduced by its arch-rival BJP – with both overt and covert help from its regional partners coming under the umbrella of the North East Democratic Alliance (NEDA).

Yet another picture that is emerging from the trends from Assam is that a sizeable number of Muslim voters of East Bengal origin opted for the AIUDF over Congress.

As per the latest trends, Congress is ahead only in two of the 14 constituencies of Assam besides one each in Meghalaya and Nagaland.

In the 2014 general elections, when there was a Modi wave in Assam, its 2009 tally of seven seats dipped to three while BJP got its highest-ever number in the state – seven. However, the BJP’s total tally of eight seats from the Northeast matched that of Congress’s total from the region.

But from the latest update by the ECI, it seems the BJP is set to win eight of the ten seats it is contesting in the state by itself besides AGP mopping up two seats. As per a seat-sharing arrangement with the AGP and the Bodo People’s Front (BPF), while the former has fielded candidates in three seats, the latter has done so in one seat.

Besides these parties, which entered into a pre-election alliance with the BJP, its NDA/NEDA partners Mizo National Front and National People’s Party have cornered two seats. The Mizoram seat was held by the Congress in 2014.

In the first announcement of results from the Northeast, former Union minister and NPP candidate Agatha Sangma has won from the Tura seat, beating state Congress strongman Mukul Sangma by over 61,000 votes.

Congratulations @SangmaAgatha. NPP is proud of your victory. We wish you the very best as you embark on a new journey to represent the aspirations of the people of Garo Hills, #Meghalaya and #Northeast. pic.twitter.com/EOpByiqtQJ

In Arunachal Pradesh, it looks like the BJP will be able to repeat its performance of the 2009 Lok Sabha elections. The party’s candidates too are the same as in 2009 – state BJP president Tapir Gao and Union minister Kiren Rijiju.

As per the latest update by the Election Commission of India (ECI), while Gao is ahead of the Congress candidate L. Wanglat by 17,061 votes, Rijiju is leading over state Congress heavyweight Nabam Tuki by a formidable 36,316 votes.

In Assam, going against the calculations of most political observers, BJP ally Asom Gana Parishad (AGP) is giving a tough fight to Congress’s Gaurav Gogoi in Kaliabor and Abdul Khaleque of Congress in Barpeta. While former AASU leader Mani Madhab Mahanta is ahead of Gogoi with 9,343 votes in Kaliabor, AGP’s Kumar Deepak Das is leading in Barpeta by 26,080 votes.

In all, the AGP is fighting three of the state’s 14 seats, leaving ten for the BJP and one for Bodo People’s Front (BPF).

In the Kokrajhar and Guwahati seats, a neck-and-neck fight is being recorded between the BPF and the United People’s Party – liberal candidates, and Congress and the BJP respectively.

The Manipur outer seat seems to be going to the Naga People’s Front (NPF) while a close contest is being witnessed between the BJP and the Congress in the Inner Manipur seat. L. S. Pfoze of NPF has taken a led over BJP’s H.S. Mate by 54,834 votes.

While the fate of 145 candidates would be decided today in 14 Lower House constituencies of Assam – the largest number of seats from a northeastern state – two each would be elected from Manipur, Tripura, Arunachal Pradesh and Meghalaya. Mizoram, Sikkim and Nagaland would send a Lower House member each to the 17th Lok Sabha.

Voting in these eight states was carried out in the first three phases of the seven-phased general elections. Starting April 11, balloting took place in five constituencies – Kaliabor, Tezpur, Jorhat, Kaliabor and Lakhimpur – of Assam besides Arunachal Pradesh West and Arunachal Pradesh East, Outer Manipur, Tripura West, Shillong and Tura in Meghalaya. The lone seats in Mizoram, Nagaland and Sikkim too went to polls in this phase.

However, due to the complaint of booth capturing and violence by the Left Front and Congress to the Election Commission of India (ECI), re-polling was conducted in 168 booths in 26 assembly segments of the Tripura West constituency on May 12. Re-polling was also conducted in 11 polling booths of the Outer Manipur constituency on April 18 following a complaint of voter intimidation by militants.

In the next phase of polling on April 18, voting was recorded in Silchar, Karimganj, Dima Hasao autonomous district, Mangaldoi and Nowgong Lok Sabha constituencies of Assam besides Inner Manipur and Tripura East. This time too, following complaints of disruption in the voting process, re-polling was conducted in 12 booths of the Inner Manipur constituency besides five booths in Assam – Karimganj (four) and Dima Hasao autonomous council (one) – on April 24. On April 27, 18 booths in Arunachal Pradesh also went for re-polling.

In the third phase of polling on April 23, the remaining four of the 25 seats of the region – Guwahati, Dhubri, Kokrajhar and Barpeta – in Assam went for voting.

Overall, the ECI had noted around 67-83% voter turnout in these states.

Though Congress has brought into the fray quite a few veterans, the BJP had dropped at least three sitting MPs and known faces of the party in lieu of new candidates. It includes minister of state for railways Rajen Gohain, a Lok Sabha MP from Assam’s Nowgong constituency since 1999.

In the 2014 general elections, the BJP, riding the Modi wave, could win seven seats for the first time in Assam, mopping up a total of eight seats from the region. The Congress, even though it came down to three seats in Assam from seven, could pick up seats in the other NE states and match the BJP’s total tally of eight from the region. 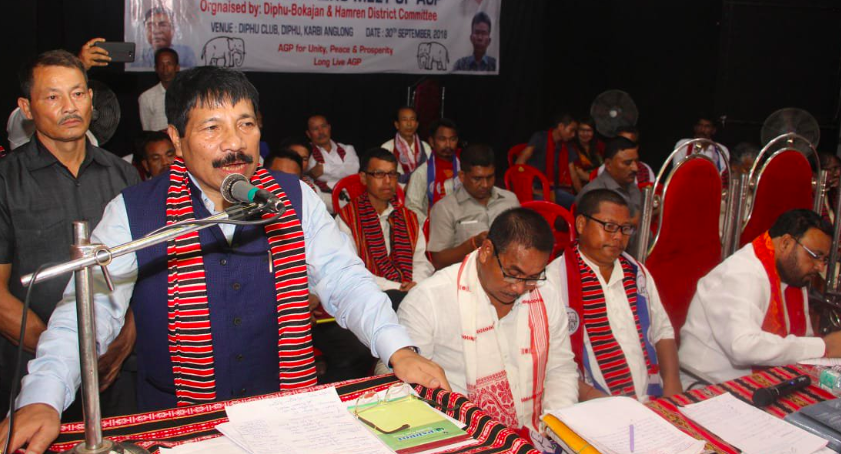 In the 2019 elections, while the BJP is in the fray in Assam with its state partners – Asom Gana Parishad (AGP) and Bodo People’s Front (BPF) – through a seat-sharing arrangement, in Nagaland, it has put up a joint candidate with its state partner Nationalist Democratic People’s Party (NDPP) for the lone seat.

Also read: BJP is Replicating the Shiv Sena-Model in Assam. This Should Worry the AGP

In the rest of the states, the national party couldn’t fight the elections together with its National Democratic Alliance (NDA) and the North East Democratic Alliance (NEDA) partners. The primary reason behind it is seen to be the massive opposition against the Modi government’s push for the Citizenship (Amendment) Bill to grant citizenship, among others, to Hindu Bangladeshi who might have entered the region along with the rest of the country before December 31, 2014.

AGP, which walked out of the Assam government opposing the Bill, finally decided to fight the Lok Sabha elections jointly with the BJP. It is contesting three LS seats.

However, in Meghalaya, the National People’s Party (NPP) and the United Democratic Party (UDP) – both members of NEDA – have put up joint candidates and chosen to keep out the BJP from the alliance. The BJP has fielded candidates separately. In Tripura too, even though NEDA partner Indigenous People’s Front of Tripura (IPFT) is in the BJP state government, it is contesting the Lok Sabha polls separately.

Also read: The Northeast Must Break Its Cycle of Dependency on New Delhi

Aside from Mizoram, and also in Nagaland, where it has put up a joint candidate with Naga People’s Front (NPF), the Congress has gone to the polls alone in the rest of the states. In all, while the BJP has contested 21 of the 25 seats on its own, Congress has contested in all the seats, one of them jointly with the NPF.

NPF, the oldest ally of the BJP in the region, and now not too happy with it, is in the BJP-led government in Manipur. NPF leader and former Nagaland chief minister T.R. Zeliang recently told reporters that the party would likely walk out of that government and NEDA after the May 23 election results were announced.

While all the major Northeast allies of the BJP were present at the May 21 dinner meeting hosted by party president Amit Shah in New Delhi, NPF leaders remained missing.