Why the Exit Polls Could Be Badly Wrong This Time

The key to the accuracy of an exit poll is that voters must be willing to tell the truth about their preferences to complete strangers. That, in turn, depends on a complex set of factors. 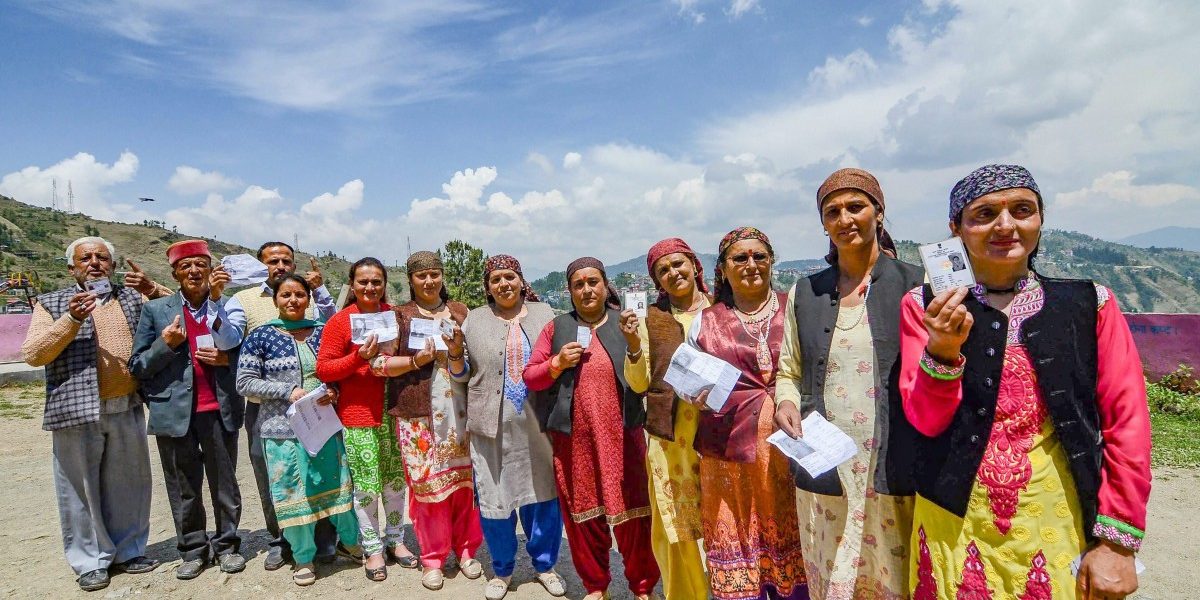 Nine out of nine exit polls have predicted an outright victory for the Bharatiya Janata Party, with close to 300 seats.

This prediction flies in the face of pre-poll opinion surveys, which had concluded that the BJP would do better than its opponents hoped, but would not come near an absolute majority in the Lok Sabha. It also dismisses the profound discontent of the electorate – of farmers over the deepening agricultural crisis, youth over the complete absence of jobs, workers over the loss of existing jobs, and small manufacturers and traders forced into bankruptcy by a combination of industrial stagnation, demonetisation and poor implementation of the Goods and Services Tax.

Could Narendra Modi’s single-plank election appeal to hyper-nationalism, attacking Pakistan, killing Kashmiri militant youth and terrorising Indian Muslims have been sufficient to overcome this extensively documented collapse of confidence? If the exit polls are even close to accurate, then this would have to be the only explanation. But can we believe the exit polls? Have they been accurate in the past?

The answer is that some exit polls have been reasonably accurate; others have been wrong but within acceptable limits, while still others have been wildly wrong. A closer examination of past exit polls is therefore necessary to determine which category the current predictions are likely to fall into.

Let us start with past Lok Sabha polls: In the 2004 elections, pollsters gave the Atal Bihari Vajpayee-led National Democratic Alliance 230 to 275 seats. But it won only 187 seats and was pushed out of power. The 2009 exit polls gave the United Progressive Alliance 199 seats and doubted whether it could stay in power. Instead, it got 262 seats and did. In the 2014 elections, however, the exit poll predictions were borne out.

Since these results give a very mixed picture, let’s look at exit poll predictions for the state assembly elections held in recent years.

In the 2015 Bihar elections, the pollsters had predicted that the BJP would get between 93 and 155 seats with a median prediction of 108 seats, and comfortably form the government. Instead they won a mere 53 seats. Similarly, in the Uttar Pradesh 2017 Vidhan Sabha elections, the exit polls gave the BJP 161 to 170 seats, and 228 to 230 seats to the SP and BSP combined. In fact, the BJP won a spectacular 312 seats.

What can we learn from these results that will help us to make sense of the exit poll results described above? It needs to be remembered that the essential premise of an exit poll is that people tell the truth when they come out of the polling booth, because once they have voted they have nothing to gain from hiding their choice. This, of course, is never entirely true, so opinion polls taken at leisure try to filter out a ‘lying factor’ by asking intersecting questions. But there is no time for this in an exit poll. So the accuracy of answers hinges entirely upon the respondents’ sense of security.

This is highest when conditions are “normal”, the rule of law more or less prevails, and the conventions of democracy are respected. These conditions usually exist when the state or country enjoys a stable party system in which both or all parties have been in and out of power several times and do not fear being voted out. In the polls described above, Rajasthan, Madhya Pradesh and Karnataka meet these pre-conditions. Chhattisgarh does not. 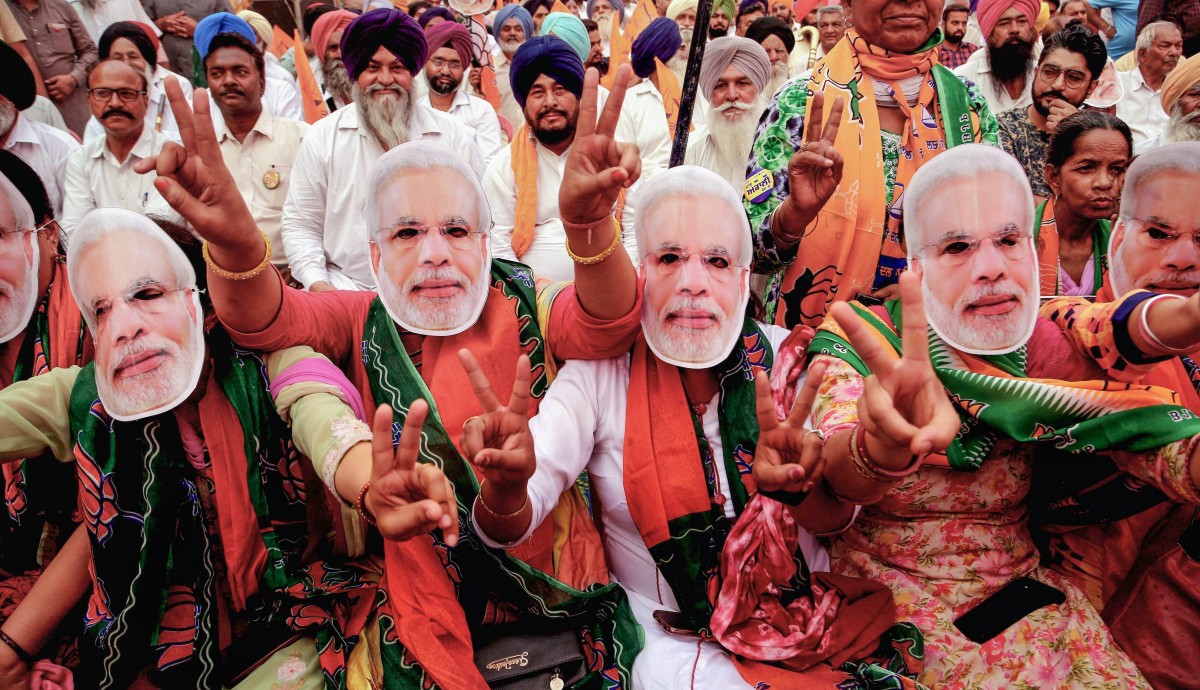 Supporters of the BJP in Patiala. Credit: PTI

A second condition in which people are likely to speak the truth is when there is an overwhelming popular consensus on issues. Respondents then draw their sense of security from being part of a large group. This pre-condition was fulfilled before the Lok Sabha elections of 2014 by Modi’s promises of reviving growth and creating millions of jobs. With ‘Vibrant Gujarat’ behind him, and a benign party and prime minister who did not target political opponents, people had no hesitation in talking about how they have voted.

A third pre-condition for exit poll accuracy is that no new factor of compelling importance should have come into play, that disturbs the equilibrium described above. The Bihar 2015 predictions went wrong because exit pollsters were unable to fully take into account the impact of the formation of the mahagatbandhan in the state, when converting votes into seats. This is the single biggest stumbling block in predicting the results of any election based upon the simple majority voting system.

The pollsters got UP wrong for the same reason – they were unable to take the impact of the division of the vote between the SP and BSP fully into account while converting votes into seats. That bitter fight, and the way it divided the Muslim vote while consolidating the upper caste Hindu vote, turned the exit poll results into a farce. The results showed that the BSP-SP vote division had given the BJP 228 out of its 312 seats.

The SP had won all the 18 by-elections in the state before the 2017 Vidhan Sabha poll, because the BSP had not fielded a candidate. As a result, five-sixths of the BSP vote had gone to the Samajwadi party. In this election, if the BSP and SP have retained their shares of the 2017 vote, their combination alone will cost the BJP 46 out of its present 73 seats.

The other new factor that the pollsters have not even remotely taken into account is the way in which Modi’s policies have unintentionally, but rapidly, sharpened the class division in Indian politics to the point where the politics of caste and creed is gradually being transformed into the politics of class.

It is not just that industry has stalled and  jobs have been lost by the million when Modi had promised the opposite. It is that every law passed by his government, and every bit of rope he has given to the Vishwa Hindu Parishad and other outcroppings of the RSS to enforce enactments such as the ban on cow slaughter, the unleashing of gau rakshaks upon cattle traders, the invasion by aged cattle of the already crisis-ridden farmers’ fields, the collapse of the cattle market, which has destroyed the prime mode of saving of the landless poor, and the systemic oppression and lynching of Muslims have brought class into Indian politics in a way that could barely have been imagined five years ago.

All the economically and politically oppressed in the country are poor. All of them are, to varying degrees, living lives of fear. Therefore, very few of them are willing to tell the truth about how they will vote to strangers. But the vast majority of them are behind the various rag-tag gatbandhans that have been formed across the country to fight the BJP. This is why the exit poll predictions this time need to be taken with more than a pinch of salt.