RTI queries have revealed, among other things, that the micro-controller used in the current elections is not one-time programmable, as consistently claimed by the Election Commission. 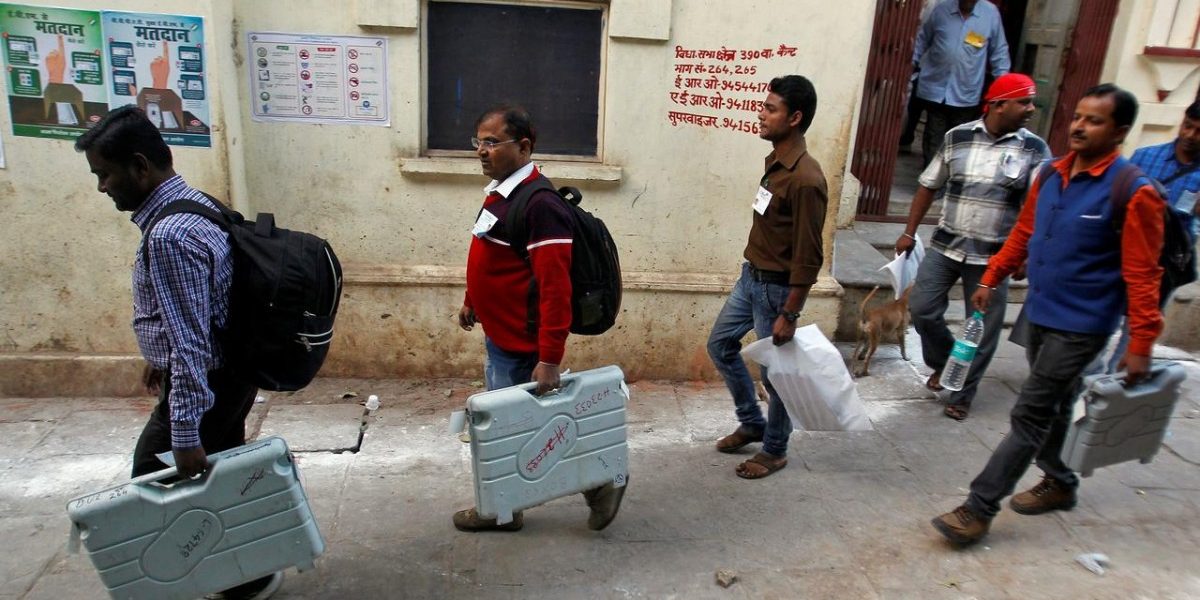 All seven phases of voting to elect members of the 17th Lok Sabha have been completed and the votes will be counted tomorrow – May 23. Soon after the last phase of polling ended, pollsters had a field day with their exit poll findings about the likely performance of political parties and pre-poll/post-poll alliances.

So did the bulls in the stock market the next day.

Several opposition parties are expressing their misgivings about Electronic Voting Machines (EVMs) and Voter Verified Paper Audit Trail (VVPATs) used in all constituencies, including elections held to the state legislatures in Andhra Pradesh, Arunachal Pradesh, Odisha and Sikkim. They are demanding 100% verification of VVPAT slips against the votes displayed on the EVM.

Once again the reliability of the machine-based voting system has become the subject of widespread debate. However, senior members of the ruling National Democratic Alliance who authored a 200-page long book in 2010, asking if India’s democracy was at risk because of EVMs, are maintaining a studied silence this time.

I too cast my vote in the New Delhi Lok Sabha constituency and yes, the VVPAT window correctly displayed the choice I made by pressing the EVM button for a few seconds. Nevertheless, the “infallibility” claims about EVMs and VVPATs made by their manufacturers and their purchaser and deployer – the Election Commission of India (ECI) – continue to be a matter of “trust”.

The ECI has repeatedly urged political parties and skeptics to trust the ability of the EVMs to faithfully record all votes cast through them and accurately display the electoral mandate on counting day.

Free and fair elections form the bedrock of our constitutionally guaranteed democracy. As vigilant citizens, it is desirable to adopt the stance – “In God we trust, everything else requires evidence”. Given the heightened anxieties over EVMs and VVPATs, it is time to publicise some information I obtained from the ECI and the EVM+VVPAT manufacturers – Bharat Electronics Ltd. (BEL) and Electronics Corporation of India Ltd. (ECIL), recently under The Right to Information Act, 2005 (RTI Act).

1. The micro-controllers (computer chip) embedded in the BEL-manufactured EVMs and VVPATs used in the current elections, are manufactured by NXP – a reputable multi-billion dollar corporation based in the US.

2. ECIL refused to disclose the identity of the manufacturer of the micro-controller used in its EVMs and VVPATs citing commercial confidence under Section 8(1)(d) of the RTI Act.

3. In 2017, some segments of the media reported that Microchip Inc., which is headed by an NRI billionaire, supplied the EVM micro-controllers. Documents released under the RTI Act show at least BEL has not used this company’s micro-controllers in the EVMs sold to ECI for use in the current elections.

4. While the ECI continues to claim that the micro-controller used in the EVMs is one-time programmable (OTP), the description of the micro-controller’s features on NXP’s website indicates that it has three kinds of memory – SRAM, FLASH and EEPROM (or E2PROM). Experts who know enough and more about micro-controllers confirm that a computer chip which includes FLASH memory cannot be called OTP.

5. The ECI has not yet made any decision on the September 2018 recommendation of the Central Information Commission (CIC) to get the competent authorities to examine whether detailed information about the firmware or source code used in the EVMs can be placed in the public domain in order to create public trust in the EVM-based voting system.

6. Despite the passage of more than five years, the ECI does not appear to have acted on the 2013 recommendation of its own Technical Evaluation Committee (TEC) to make the firmware or source code embedded in the micro-controller used in EVMs transparent in order to ensure that there is no Trojan or other malware in the EVMs.

7. ECIL replied that the firmware or source code testing was done by a third party, namely, STQC – an agency under the Ministry of Electronics and Information Technology. But the CPIO denied access to the reports on the ground that they were too voluminous. BEL denied access to this information claiming the exemption relating to commercial confidence and intellectual property rights under Section 8(1)(d) of the RTI Act.

8. BEL bagged a purchase order worth Rs 2,678.13 crores to supply EVMs and VVPATs to ECI. ECIL, however refused to disclose this information, also stating that despatch data will be supplied after the general elections are completed, and

9. While BEL claimed that the battery powering its EVM could last 16 hours of non-stop voting with four ballot units, ECIL claimed a battery life of two years for its EVMs.

10. While ECIL claimed that the firmware and source code audit related information was “classified” and could not be disclosed under Section 8(1)(a) of the RTI Act which protects national security interests, BEL claimed commercial confidence and Intellectual Property Rights-related exemption under Section 8(1)(d) to deny access to the same information.

Except for ECIL, whose CPIO replied to the RTI application on the day I submitted a first appeal, the Election Commission and BEL had sent their RTI replies in April 2019 itself. I deliberately waited until the last phase of polling was completed to release this information to avoid accusations of using RTI-sourced information to influence the outcome of the elections. Now that only counting and declaration of results remains to be done, nobody need point a finger about the timing of the release of all this information.

Some EVM-faithfuls might still ask: why now? The answer to that question can be found in the judgements of two Supreme Courts – one German and the other our own.

While striking down the law permitting the use of EVMs in the elections in Germany, in 2009, the Federal Constitutional Court cited the principle of “public examinability” of all essential steps in the conduct of elections in that country which is guaranteed under the Constitution (except when other constitutional interests justify otherwise).

Although the Indian constitution does not make a reference to the principle of “public examinability” of steps taken during elections, the Supreme Court of India implied this principle as the basis of the people’s right to know everything that the government does in a public way almost three-and-a-half decades before the German Constitutional Court. In the matter of State of U.P. vs Raj Narain, Justice Mathew’s opinion echoed this very principle:

“74. In a government of responsibility like ours, where all the agents of the public must be responsible for their conduct, there can but few secrets. The people of this country have a right to know every public act, everything, that is done in a public way, by their public functionaries. They are entitled to know the particulars of every public transaction in all its bearing.”

These RTI interventions are aimed at placing as much information as possible in the public domain about EVMs, VVPATs and other related matters which the ECI or other public authorities are reluctant to publish voluntarily.

In the context of elections, perhaps voter choice – individually and at the community level – are the limited set of matters that deserve confidentiality, legally and legitimately. All other matters must be amenable to “public examination” and facilitate informed public debate.

The author would like to thank Kishore Jonnalagadda, electronics engineer based in Bengaluru, for his assistance.