Elections 2019: BJP Swaps Out Saffron for Green in Kashmir Campaign

Sheikh Khalid Jehangir, the BJP candidate from Srinagar, also visited the shrine of a 14th-century Muslim saint to seek blessings before the elections.

The BJP logo as seen on a campaign poster in Srinagar.

Srinagar: The Bharatiya Janata Party has ditched saffron and adopted green in its ongoing campaigning for the Lok Sabha polls in Kashmir.

On Thursday, a photo of Sheikh Khalid Jehangir, the BJP candidate from the Srinagar parliamentary constituency, splashed in green on the pages of Srinagar dailies. 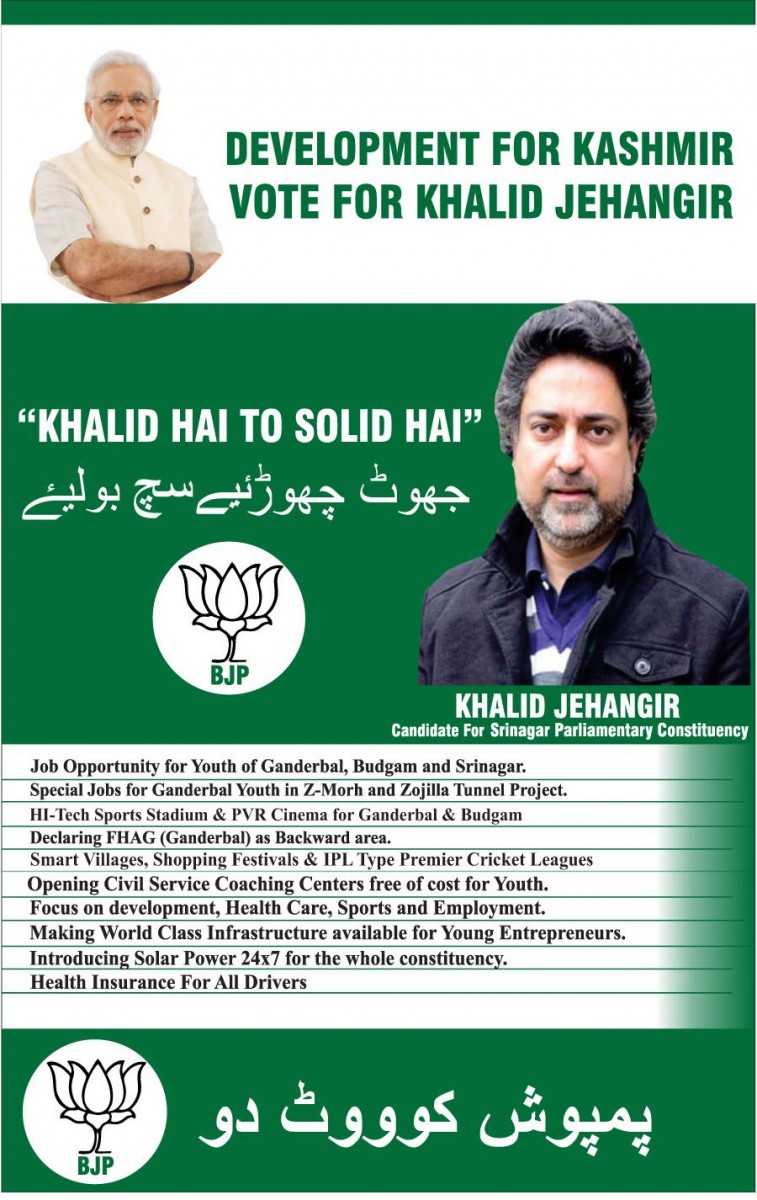 “Khalid hai toh solid hai (If it is Khalid, it’s solid)” read the bold caption in English and Urdu on the quarter-page advertisement.

An image of Prime Minister Narendra Modi in a light pink waistcoat with his arms crossed was placed right next to the message (also in green): “Development for Kashmir, vote for Khalid”.

The advertisement was designed on a green background. The BJP logo, the lotus – the petals of which are usually coloured saffron – was designed in white and black, with the inscription ‘BJP’ underneath in green. The bottom of the advertisement bore the message in Urdu: Pamposh ko vote do (Vote for lotus).

Another BJP advertisement for Khalid used both green and saffron. Sharing it on his Twitter account on Wednesday, Khalid wrote: “My people said to me “fear not, the Almighty is your strength, the victory will be sweet at last”.”

Green is the colour people often associate with Islam. In Kashmiri political circles, the colour in usually linked to BJP’s former ally, the People’s Democratic Party, whose party symbol ‘ink-pen next to an ink-pot’ has a green background. On the other hand, the BJP’s lack of sympathy (if not outright hatred) for Muslims has been widely reported.

Khalid is the BJP spokesperson for Kashmir and one of the few people in the Valley highly regarded by the party leadership in Delhi. 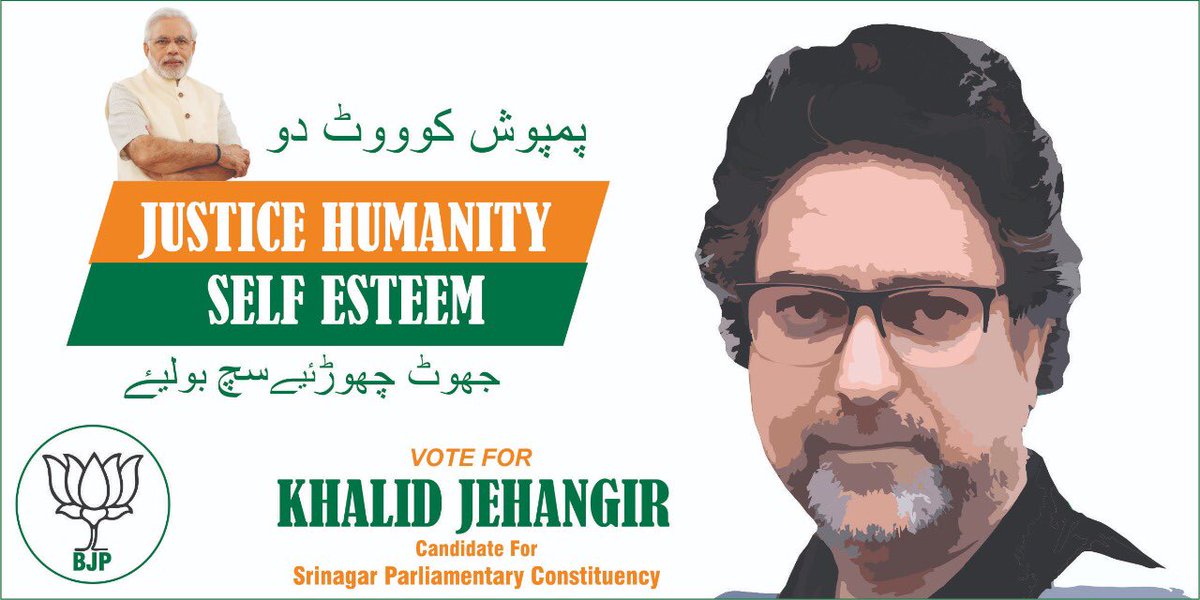 Not stopping at the colour green, Khalid is also adopting other religious ways to woo his voters.

On Wednesday, he went live on Facebook sharing his visit to Charari Sharief, the shrine of Sheikh Noor-ud-Din Noorani, known as Nund Resh and Alamdar, a 14th-century Muslim saint revered by many in Kashmir.

Took blessings at the Sufi saint shrine NUND RISHI also known as Sheikh UL ALLAM ,RA !
The shrine was burnt by a Pakistani Terrorist Mast Gul in 1995 .
Today the followers of the NUND RISHI has vowed to safeguard Kashmiriet .
I am blessed . pic.twitter.com/LG2IOC678G

In the video, the cleric is seen praying for for Khalid’s success.

“Oh, Alamdar-e-Kashmir, the way you bestowed the crown upon Bakshi Ghulam Mohammad in 1953, please bestow it in the same way upon this person (pointing towards Khalid),” the cleric can be seen saying inside the shrine.

He even asks Khalid to spread out his arms and plead for the Sufi saint’s blessings. 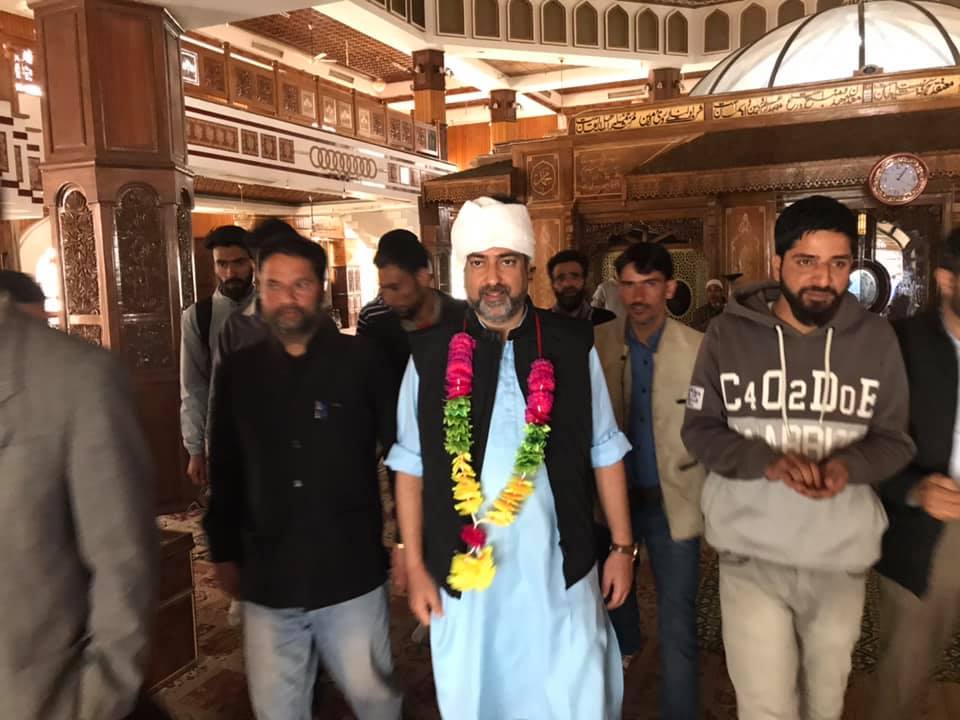 Not just colours, even Khalid’s offers are quite different from the usual BJP campaigns. His promises are largely material, and don’t touch on larger political issues. He has been talking about jobs, sports stadiums, cinema theatres, smart villages, 24X7 solar power, health insurance “for drivers”, “world class” infrastructure facilities for entrepreneurs and so on.

Asked about the use of green, Khalid said he doesn’t “see politics in the prism of colours”.

“The basis of my campaign is ‘Jhoot chodo, sach bolo (Abandon lies, speak the truth)’. I can only promise what I can deliver. Rest, whatever other parities are saying is a big lie,” he told The Wire.

About his visit to the shrine, he said he has been going there “since my childhood”.

“I don’t think the BJP is anti-Muslim. May be Omar Abdullah after becoming a Union minister under BJP rule sees it that way, and maybe Mehbooba Mufti after taking support from the BJP think so. The BJP is a national and secular party,” Khalid said.