A New Star Is Rising in the BJP – Amit Shah

From being a backroom operator, the BJP president is moving to the forefront. 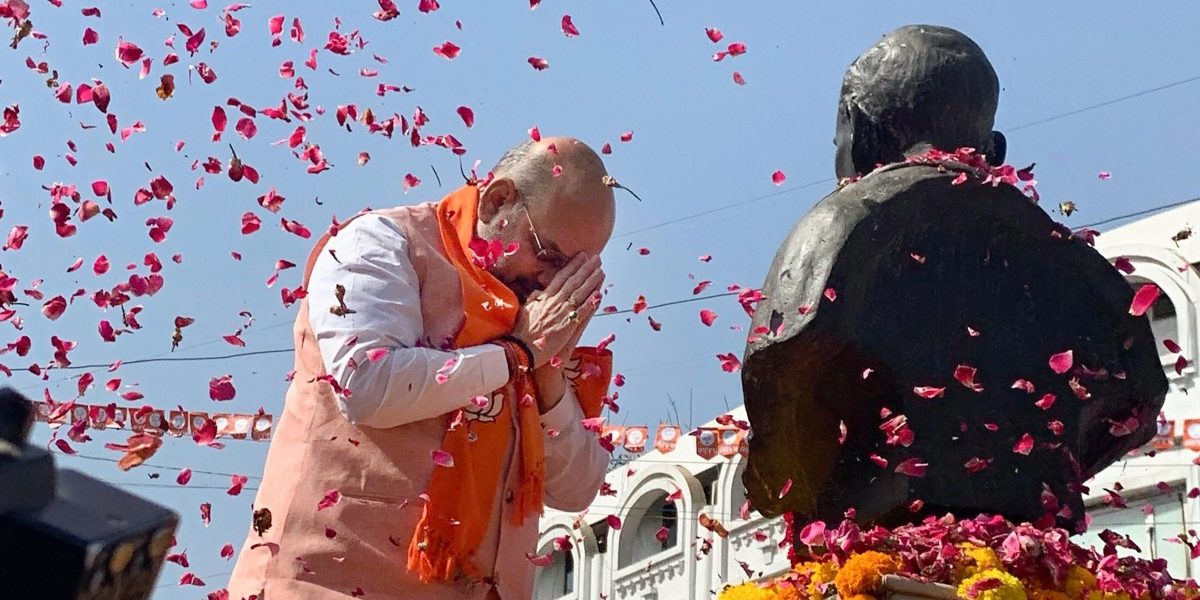 Modi and Shah are said to be the perfect team. Modi is the face of the BJP, one who appeals not just to his core constituency – who adore him enough to have a collective name of their own, bhakts – but also to a wide variety of others, ranging from urban professionals to first time voters who find his messaging inspiring. The other is a master strategist, sewing up coalitions, picking candidates, looking at not just the big picture but also the tiny details.

As the leader’s consigliere and at the same time the party’s undisputed boss, Shah is in the enviable position of being the master of all he surveys, keeping malcontents in line and working towards just one objective – ensuring that his own super boss remains invincible. For him, the party matters, of course, and so does the ideology, but ultimately Shah serves ‘saheb’.

Critical to this arrangement is that one man gets the limelight while the other, while on his side, doesn’t overly project himself. Both cannot be stars that shine with the same intensity. Though Shah is often seen with Modi on stage, it is the latter who is the centre of attention; it is his speeches the crowds come for, it is he who brings in the votes. Shah may be the architect of the victory, but much of his work is as a backroom man.

But that is changing, and visibly so. Shah has been a familiar face around the country of late, not just forming coalitions – as he did in Bihar and Maharashtra, among other places – but also giving campaign speeches and interviews across the country. Gradually, he is assuming a higher profile, one that spotlights him and him alone.

Filing a nomination for the elections is a good occasion for some drum beating, especially for high-profile candidates. The party’s cadre and local leaders go along with the candidate to provide support and for photo-ops. For his first ever nomination for the Lok Sabha elections last week, Shah was accompanied by a phalanx of not just the top names of his party – Rajnath Singh, Nitin Gadkari and Arun Jaitley – but even alliance leaders, including Ram Vilas Paswan, Prakash Singh Badal and most crucially, Uddhav Thackeray, who till the other day was a bitter critic of the BJP. To reach the venue, Shah took out a four-km road road show, accompanied in an open car by Singh and Piyush Goyal. 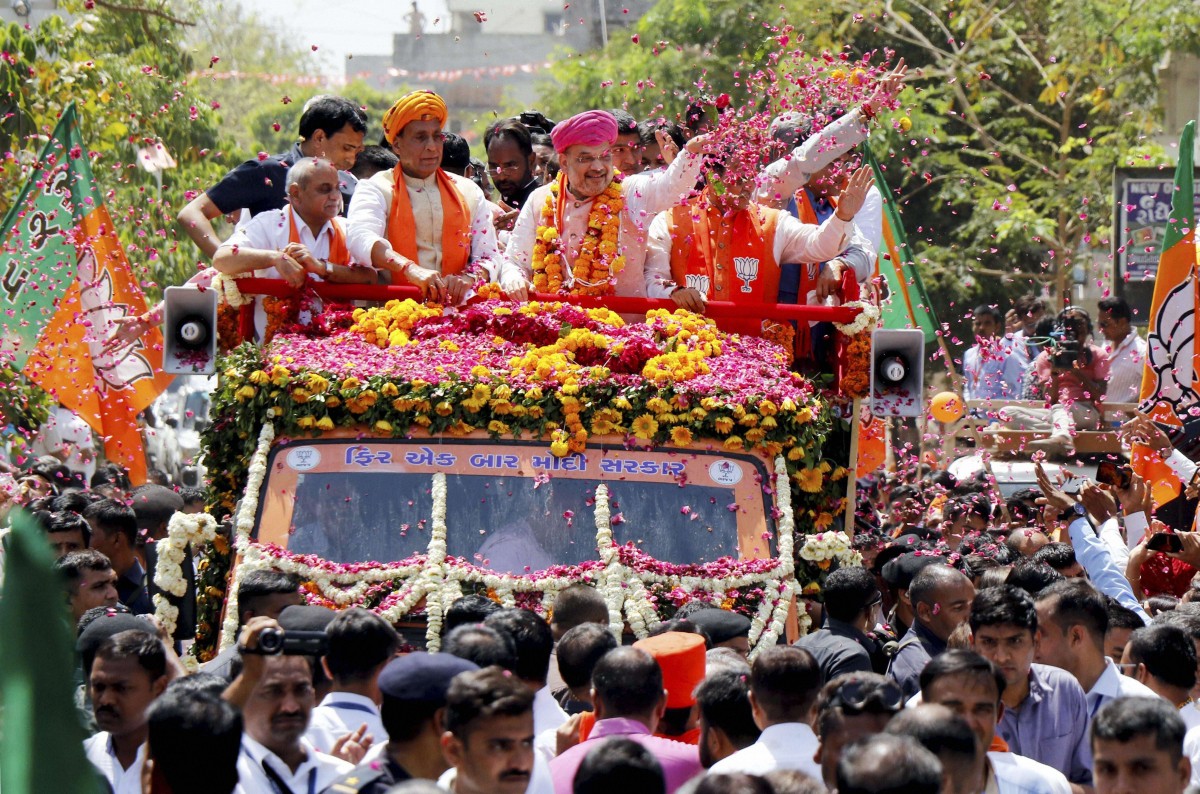 The optics should not to be missed. Shah was not just demonstrating his clout within the party and with the allies, but this way he also emphasised the point that he was now the party’s candidate in Gandhinagar, a constituency long held by Lal Krishna Advani, who was the second in command to Atal Bihari Vajpayee in the 1990s and subsequently the man who led the party during the 2009 elections. He lost, but it was he who would have become the prime minister had the BJP won.

It is on this same Advani that Shah engineered a surgical strike – more a surgical removal, really – ending in one stroke the political career and the hopes of a man who was among the founders of the BJP in 1980 and who was responsible for building it into a political force. It was Advani who had saved Modi when others were out for his blood, and now he had been humiliated by Modi’s closest adviser. The symbolism is unmistakable.

Shah has assumed a very high media profile too. Late last month, Shah was on Aap ki Adaalat on India TV, where he got a full hour to talk about the achievements of the Modi government and of course rubbish the Congress and the Nehru-Gandhi family. He has since given another interview to Network 18, the Mukesh Ambani-owned company which has in its portfolio channels in English, Hindi and several regional languages. No doubt more are on the way.

No other BJP leader is getting this kind of attention. Arun Jaitley, once regarded to be the key third pillar of the post-2014 BJP edifice, is giving interviews to newspapers and writing blogs, but has not been out there in the field. Sushma Swaraj has completely withdrawn voluntarily and Nitin Gadkari, when he does appear in public, proclaims his complete fealty to Narendra Modi. His short-lived burst as an ‘acceptable’ alternative to Modi, if the BJP did not get a full majority on its own, is long forgotten.

At one time even ‘Yogi’ Adityanath was touted as a potential future replacement for Modi. His constant barrage of hate and his communal politics were said to enhance his appeal to the hardcore Sanghi followers and the RSS leadership. Since then, Adityanath has crashed and burnt, singed not just by his blatantly anti-minority policies but also his total ineptitude for governance. Shah is not yet an alternative to Modi – far from it. If anything, Shah is Modi’s creation, since it was the latter who handpicked him as the chief of the BJP in July 2014, just over a month after he became the prime minister. This made Shah the most powerful man in the party, quite a journey for someone who was once accused of murder, kidnapping and extortion, and was externed from Gujarat in 2010 when he was out on bail. Shah owes not just his position but his very political existence to Modi. Nor can Shah build a cult around him the way Modi has – his face is on every government ad, on merchandise, on boarding passes; he even has a TV channel named after him.

But Shah is not letting that come in the way – he has long-term plans. After years of remaining behind the scenes, Shah is now stepping onto the stage. A victory in the elections will put him in the front benches of the Lok Sabha. He may even get a ministerial post. His current strategy of rejecting old MPs and bringing in new faces to contest elections will create a whole cohort of hardcore supporters who will owe their political careers to him. His outreach to coalition partners will ensure a widespread network of allies. He will become an immensely powerful man.

Also read: From Visionary to Chowkidar – Political Messaging Then and Now

No matter how well or otherwise the BJP does in the elections, Shah will be an important force in the party. If the party gets a majority on its own, he will share the credit for his coalition building. If it doesn’t, he will be the go-to man to bring in more allies. Modi will depend on him for delivering the goods. With the fading away of all other faces and the lack of any other credible and senior leader in the party (and in parliament), Shah will be the only other name to reckon with in the BJP.