The 'upper'-caste paramilitary group in Bihar killed close to 200 Dalits in the mid-1990s. 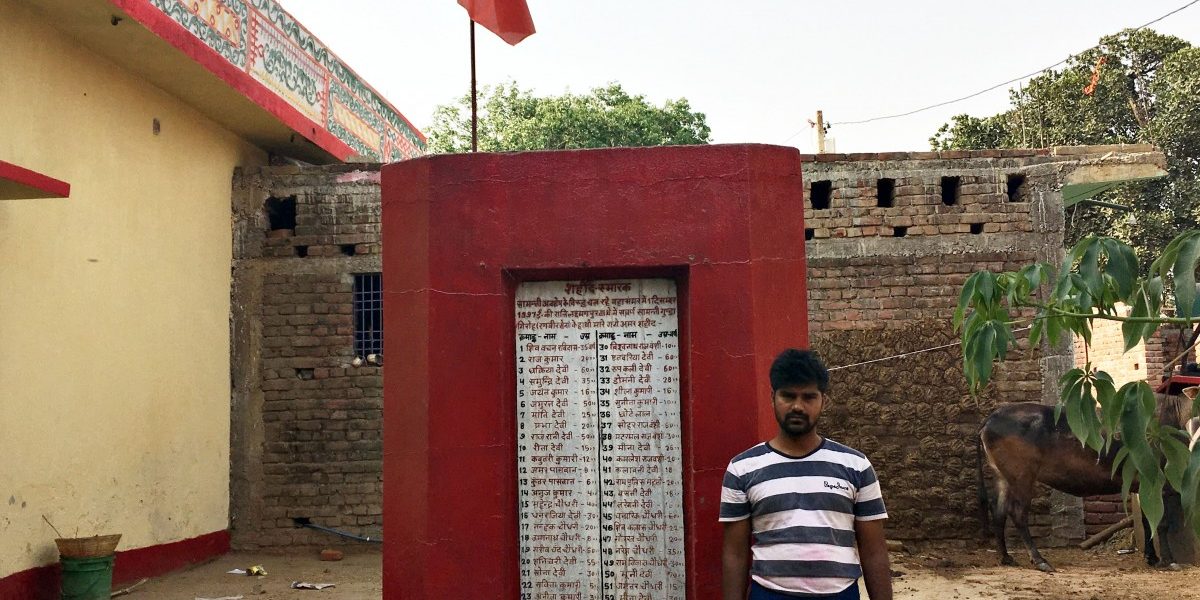 Manish Kumar next to a memorial for victims of the Laxmanpur Bathe massacre.

I walked straight to young Manish Chaudhary’s house in village Lakshmanpur Bathe. His house now doubles up as a memorial to the 58 victims killed by the dreaded ‘upper’-caste paramilitary Ranvir Sena, on the night of December 1, 1997. I first met Manish in 2001, when he was 10 years old. Since then we have met regularly on my many visits on assignment for an NGO.

We exchanged pleasantries and I informed him that the purpose of my current trip was not related to any NGO work, but that I was trying to report on the upcoming elections. I wondered how the survivors of the massacre would vote in the context of what had happened in the village. He instantly responded, “Hua kya tha! Ghar mein ghus kar mara tha. Jaise Modi ne Pakistan mein ghus kar mara hai (The obvious happened! They killed us by entering our houses, just the way Modi did in Pakistan).” I asked him who he will vote for. “I will press the button on the lantern [the election symbol of the Rashtriya Janata Dal].”

Bathe is a village on the banks of the Son river, in the Jehanabad district of Bihar, 90 km from Patna. Jehanabad goes to polls on May 19. It’s a large village with a voting population of about 4,000. A vast majority of the people are Dalits, belonging to various sub-castes like Rajwanshis, Mallah, Dusaads, Ravidas/Jatavs and others.

Bathe is one of the many villages where the Ranivr Sena let loose its terror during the mid-1990s. Nearly 200 Dalits were massacred on the suspicion that they were sympathisers of underground Maoist groups. The most infamous violence was in Bhatanitola (1996), Ekawri (1997), Shankarbigha (1999) and Mianpur (2000). 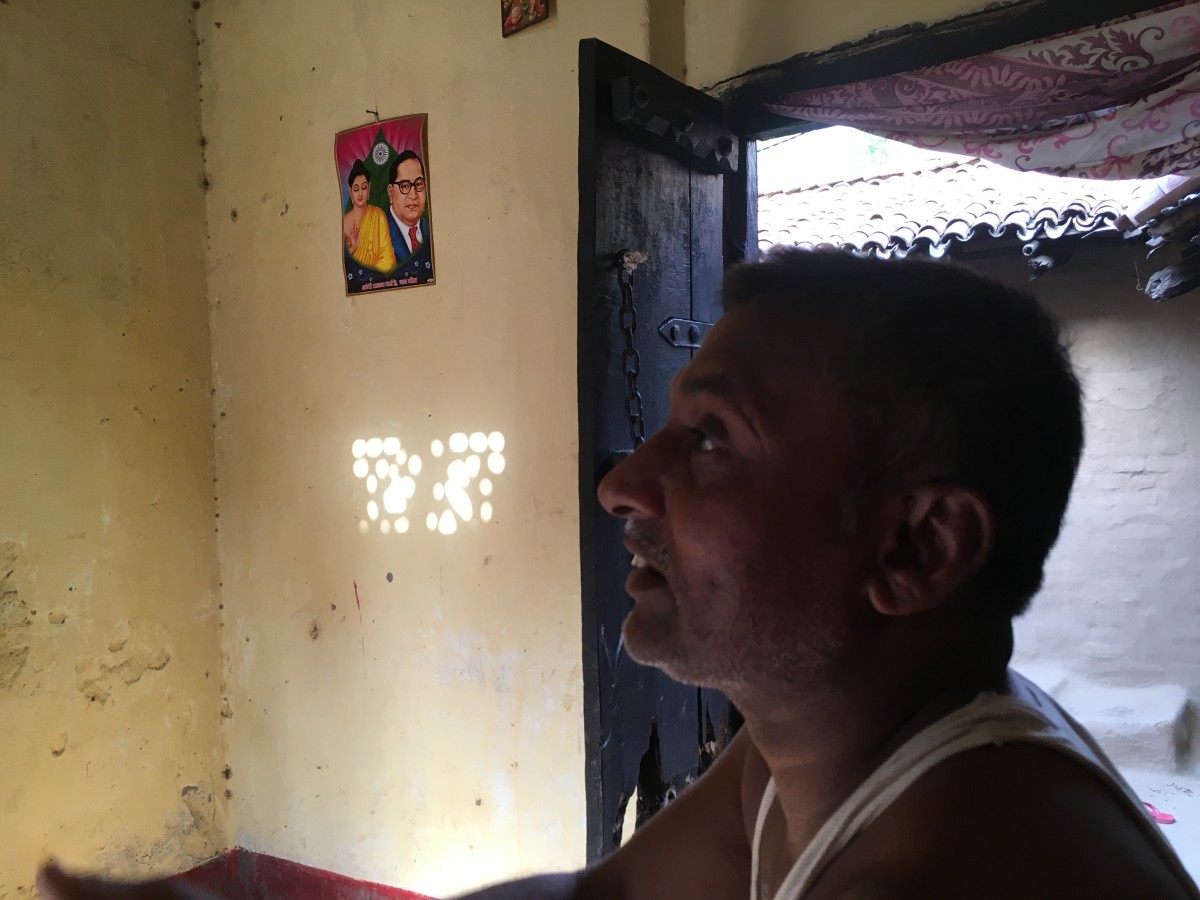 Karim Das, who lost five members of his family in Laxmanpur Bathe.

Ranvir Sena’s founder Brahmeshwar Prasad was shot dead by suspected Maoist in 2012 in Ara. Many leading upper-caste politicians cutting across political parties had attended his funeral. Maoists, too, indulged in several brutal killings of the upper castes in Raghopur (1997), Narayanpur and Senari (1999).

Fifty-eight people were killed in Bathe. The victims belonged to 14 households. So there were many homes which lost more than one family member. Those killed included 14 children who were under the age of 10. The youngest was a 1.5-year-old girl. Manish lost six members of his family. He survived because he was away at his grandfathers house that night.

Nandlal and Hira, also in their 20s, are good friends with Manish. Nandlal is a Jatav and Hira is a Rajvanshi. All three agree that Modi should be defeated. They are very articulate and rattle off several reasons why they feel so strongly about this. They say he has not kept his promises of jobs, doubling farmer’s incomes and so on.

Also read: As Bihar Goes to Polls, How Has ‘Smart City Bhagalpur’ Fared?

I ask them, what about Nitish Kumar. They say he is a dal-badloo and dhoke-baaz (he has broken alliances and promises) and cannot be trusted. I ask them if their other friend Mahesh is around. We go to his house and call for him, but there is no answer. We are a bit disappointed because Mahesh always livens up interactions with his excellent one-liners, and is a kind of prankster in the pack.

Mahesh had lost six members of his family in the violence. He too is in his 20s and belongs to Rajvanshi caste, the Maha Dalits. We locate him later at a tea stall and get talking. Except him, all his family members present in the house were killed – mother, father, sister, aunt and uncle. I ask him how he managed to survive. He responded by throwing an expletive at himself and saying that he has always had a survival instinct and that came handy that horrible night. 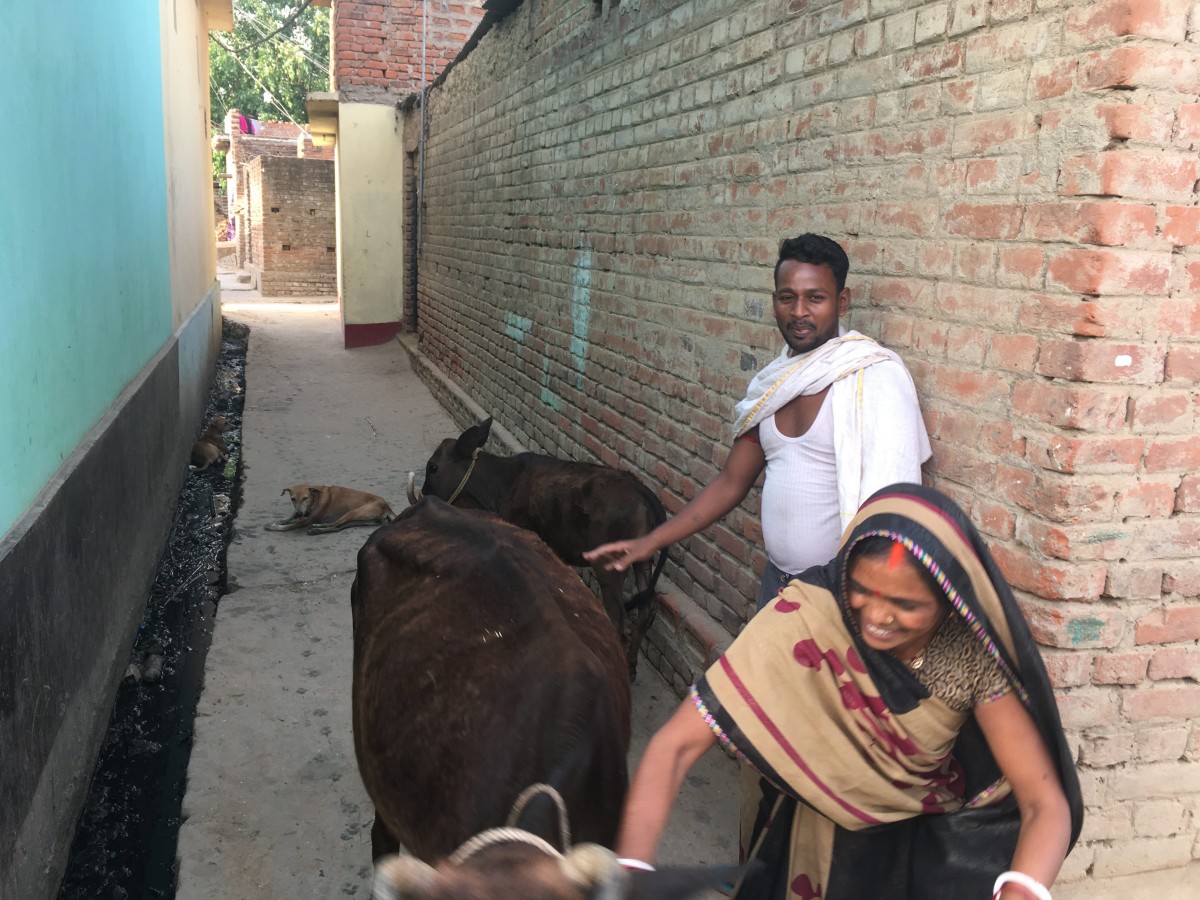 Mahesh Rajvanshi outside his house in Laxmanpur Bathe.

He hid under the bed but was hit on his leg. He shows off the wound and says, “Jab dil ke zakham bhar jaate hai to ye tang ka zakham kya cheez hai (If wounded hearts are healed with time, what is a mere wound on the leg).” Mahesh says he will vote for Modi. I ask him why not RJD? He replies, “Laluji ka zamaana gaya, woh 2G the, humare Modi 6G hain (Laluji’s days are over, if he was 2G our Modi is 6G).” He says Modi has done vikas, has taught Pakistan a lesson and so on. His friends protest and try and argue with him, but he laughs. Mahesh admits, though, that a vast majority of the village will vote for Lalu Prasad.

We all then go to Gita Devi’s house. Gita is a big, confident and feisty Jatav woman. She never hesitates to boast about how she has confronted various government officials to demand ration cards, NREGA work and such entitlements.  She says last time, like all Jatavs, she voted for Mayawati but in this election they will all vote for Lalu because Modi has to be taught a lesson. But in the same breath she says each of these parties are chors (thieves). Except for Maale (CPIML). I ask her then why not vote for Maale, as they have also put up a candidate in Jehanabad. They all reply in unison that they always vote for them in the assembly election, but not this time because their vote will be wasted as Maale doesn’t stand a chance.

Also read: Tejashwi Yadav Has Arrived but an Uphill Task Faces Him

We say goodbye to them and head to Shankar Bigha, around 20 km away from Bathe. This is another village where the Ranvir Sena killed 22 people, on the night of December 25, 1999. Like Bathe, Bigha is a Dalit village. But the latter is relatively small, with only 400 voters. Most people here belong to the Paswan or Ravidas sub-castes.

We meet Aitwarya Devi, Usha Devi, Rajkumar and others. All of them had lost four members of their family. The massacres took place late at night, when the entire village had gathered at an open space in village for a kirtan. The murderers came from the side of the neighbouring Dhobi Bigha, which is a predominantly Bhumihar village. 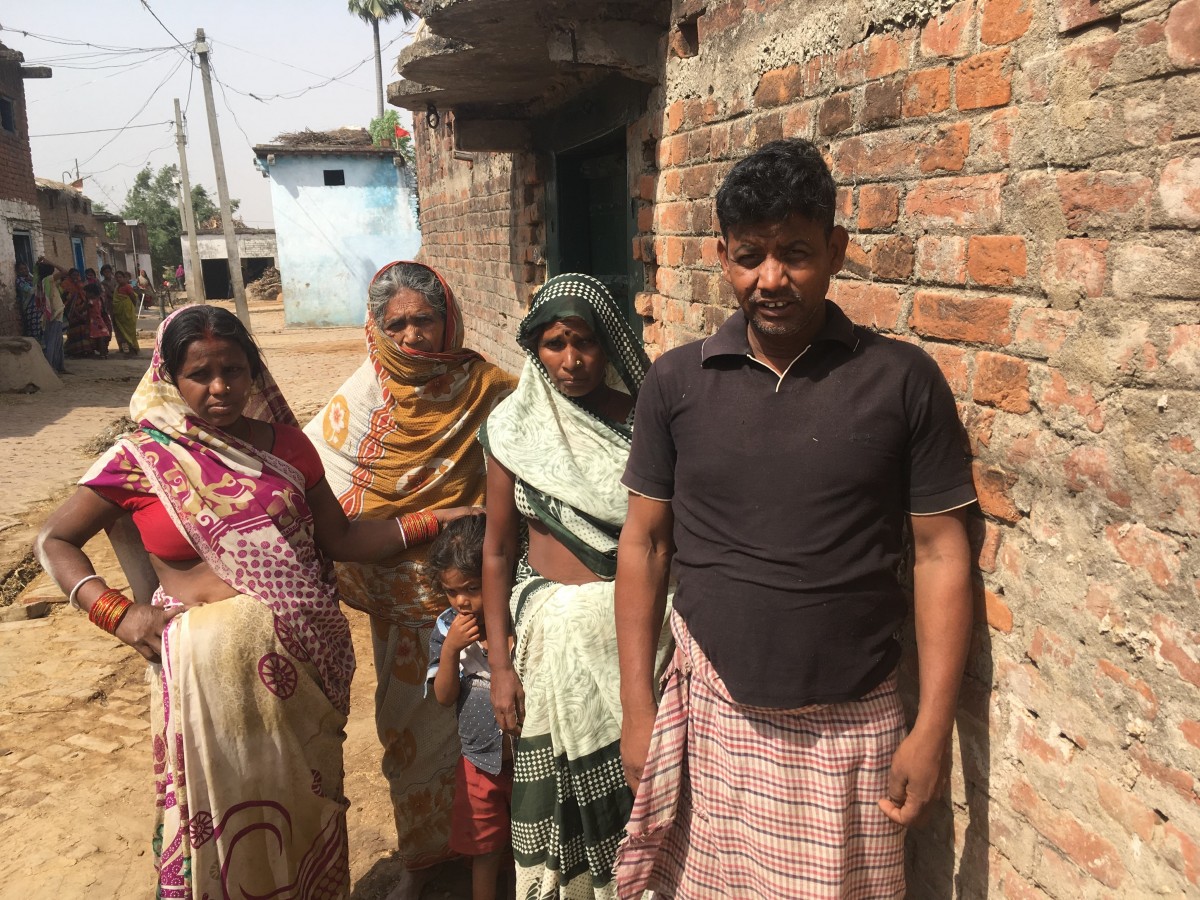 (From right) Rajkumar, Usha Devi and Aitwarya Devi in Shankar Bigha, at the site of massacre.

Aitwarya Devi hasn’t changed at all since I first met her. She looked old 15 years ago, wrinkled face, back bent, frail. But she has remained the same over the years. The moment she saw me, she said now you will say I look the same! She is loud and doesn’t let others speak. She says she will vote for the Lalu-led coalition. But she is confronted aggressively by Raju and other young men. They will vote for the Janata Dal (United), as that alliance is supported by Ramvilas Paswan. None of them know the names of the individual candidates who are in the fray.

Aitwarya and Usha are from an older generation, while Raju and his friend are in their 20s and 30s. The women say that when the massacre happened, Paswan made a token visit to the village. He just took a stroll and left, they say, with his nose covered with a handkerchief. They say Rabri Devi and Lalu came and sat with them, hugged them and consoled them like elders are supposed to do. So how can they not vote for him? “Aur Lalu ne jaach bhi bhitayee thi (Lalu also set up an enquiry).”

Raju and others were only kids when the killings happened, and they don’t remember that much about that night. For them, their loyalties are with Paswan and they will vote for whichever coalition he supports. They all agree to disagree.

Both Aitwarya and Usha are referring to the Amir Das Commission set up by Lalu Prasad’s RJD, after the Laxmanpur Bathe massacre. The mandate of the commission was to inquire if there were any links between political parties and the Ranvir Sena. The Nitish Kumar government abruptly disbanded the commission in 2006, just before it was to submit its report. It is strongly believed that the commission’s findings were going to demonstrate firm links between the Ranvir Sena, the JD(U) and the BJP.

On my way back, I stop at Dhobi Bigha to say hello to some friends. We speak about the elections and they say that the entire village will vote for JD(U). “Na sirf Bhumihar magar saari agdi jaatiya Modiji ko vote karenge (Not just Bhumihaar but all the upper castes will vote for Modi).” They offer me satu and chaach. As I am about to leave, I tell them I am planning to write a story on the elections. They taunt me in a friendly manner, “Aap to unhi ka paksh likenge, magar jeetenge Modiji hi (You will, of course, write their perspective, but Modiji is set to win),” pointing toward Shankar Bigha.

All images by Jamal Kidwai.

Jamal Kidwai is founder of Baragaon Weaves. He can be contacted at jamalkidwai@gmail.com.