Ground Report: How the Bharatiya Tribal Party Is Making Its Mark in Rajasthan

In the Banswara-Dungarpur region, Kanti Lal Roat's campaign has his opponents worried. 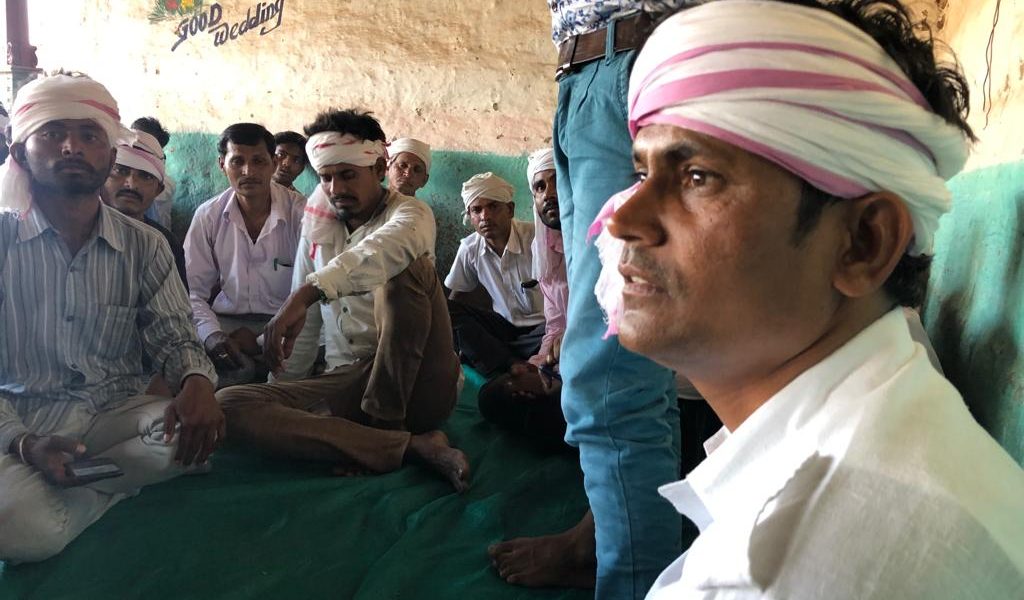 Banswara (Rajasthan): “Welcome to Bhil Pradesh,” says Kanti Lal Roat, a smile playing on his face as he points to the rusted and leaking corrugated iron roof of a nearby building. “See, this is just another post office in our tribal area, you can ask Narendra Modi to have a look at it. One shower and all the mail goes.”

The post office serves two villages – Malmattha and Dhamoh – and a large crowd from the two villages has gathered here to hear Roat, the 43-year-old candidate of the Bhartiya Tribal Party (BTP) from Banswara-Dungarpur in southern Rajasthan, where tribals are 76% of the population, the highest anywhere in the state.

This is an area contiguous to Gujarat, where the BTP was founded in 2017 by Choubhai Vasava. It debuted in the 2018 state elections in Rajasthan and created a sensation – winning two of the eight assembly seats of Banswara and finishing second in two others. This unprecedented tribal upsurge in the largely bipolar politics of the state has now culminated in a bid for the Lok Sabha. The party is contesting four seats – the reserved tribal seats of Banswara and Udaipur, as well as Chittor and Jodhpur.

“The Bhils have never had a voice, no one to fight for our adhikar (rights), we are going to do just that,” says 39-year-old Rajkumar, an MLA recently elected from the Chorasi assembly constituency in Dungarpur.  Like most other BTP members, he is under 45 and cut his teeth on student politics.

The BTP emerged out of the Bhil Adivasi Vidyarthi Morcha, a student organisation founded in 2015. The Morcha itself was a response to the anti-reservation thrust of the Vasundhara Raje government. The Raje government, despite an adverse high court ruling, had sought to implement a quota for non-tribal local people in the tribal areas to meet the demands of an RSS-backed organisation called the Samanta Manch. The Morcha was quick to gain ground, winning three consecutive student elections in Dungarpur University. Rajkumar says, “The ABVP (RSS’s students’ wing) was the giant we slew, the NSUI (Congress’s students’ wing) is inconsequential here and though we defeated the SFI (Left student group), we don’t have a problem with them.” 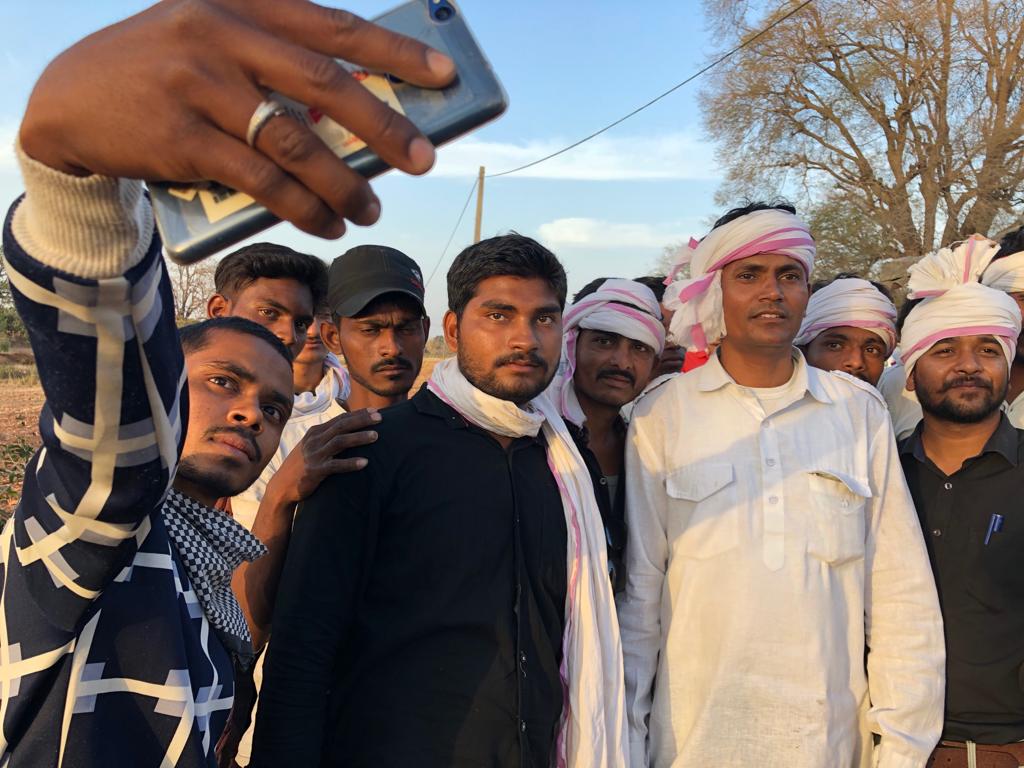 A dramatic leap from student politics to national elections, the BTP cadre is mostly under 45. Credit: Pooja Arya

From student politics to a battle for the Lok Sabha is a dramatic leap. The party is struggling for funds and resources to fight a national election. Like most BTP candidates, Roat has to make do with very little. Every morning after a meeting with his party members, he sets out on the campaign trail in a rented car while others follow on motorcycles. On some days, his supporters may hire an extra car. When we accompanied Roat across the villages of Dungapur, he was quick to ask, “Hope you don’t mind if some of our people sit in your car?”

In this David and Goliath battle against well-funded and entrenched BJP and Congress candidates, what works to Roat’s advantage is the energy of the BTP cadre and their knowledge of the terrain. “In a reserved seat, even our rivals are Bhils but unko Dilli kee hawa lag gayee hai (they’ve been infected by the Delhi air), they’ve forgotten how to climb the dungars (hills),” he tells me.

In innumerable informal meetings through the day, his speeches tie together the larger context of tribal rights – from the implementation of the constitution’s fifth schedule to the push for a separate Bhil Pradesh – to local issues – the need for medical facilities in one place or the requirement for lifting water from the Kurya Kund dam in another. It is this intimacy with the terrain and the people that separates the BTP from its rivals.

In a village in Simalwara, Dungarpur, Roat points to a man with a bow and arrow slung on his shoulder, “Yelesh Bhai is not standing there to provide Adivasi colour, he is a wonderful archer.”

He then turns to a gathering of about 150 villagers who have collected near the panchayat office and continues, “We are children of Eklavya, archery is in our blood, every child here knows who Limba Ram is.” 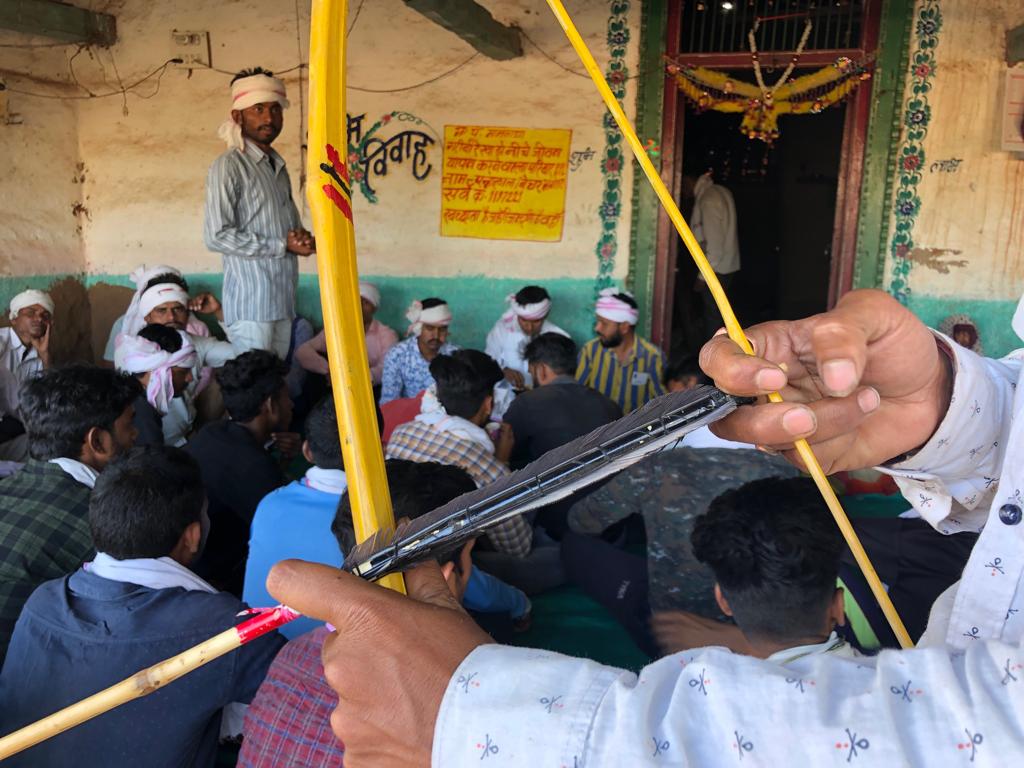 A BTP worker addresses an election sabha: We don’t need the RSS and other bhagwa types to tell us about the Mahabharat, we are children of Eklavya. Credit: Pooja Arya

Roat rubbishes the claim the Vanvasi Kalyan Parishad has made in the past that Limba Ram was discovered through their Eklavya Khelkood Pratiyogita, a school programme, “The RSS claims they have a sports programme through which they found Limba Ram, how come they never found anyone else?”

Roat’s speeches, with their consistent emphasis on the distinct cultural identity of the Bhils, resonate with the Bhil and Meena population which form the backbone of the BTP’s support base.

In Asaspur village, he stops to point to two figurines placed under a Mahua tree, and a white flag with stars and a moon etched on it, “This is our dharm jhanda (religious flag), these are our isht devtas (clan deities) but the Sangh wants us to be Hindus in their style. So now the Bhartiya Tribal Pary has its own Adivasi Sangh.”

The rhetoric of Bhil self-assertion is new to the region, which has seen two decades of intense saffronisation. Southern Rajasthan – Udaipur, Dungpuar, Banswara – which accounts for almost two thirds of Rajasthan’s 12.5% tribal population, has long been a bastion of the Vanvasi Kalyan Parishad, an RSS affiliate set up to work in tribal areas. The RSS also runs a comprehensive ‘Banswara Project’ which focuses on pushing its agenda through schools, cultural organisations and even medical camps, while the Vishwa Hindu Parishad has 500 schools in Banswara alone. In addition, several other Hindu organisations such as the Gayatri Parivar have worked here in recent years. Roat claims the Gayatri Parivar is trying teach tribals the “right way to do havanas and chant mantras”. 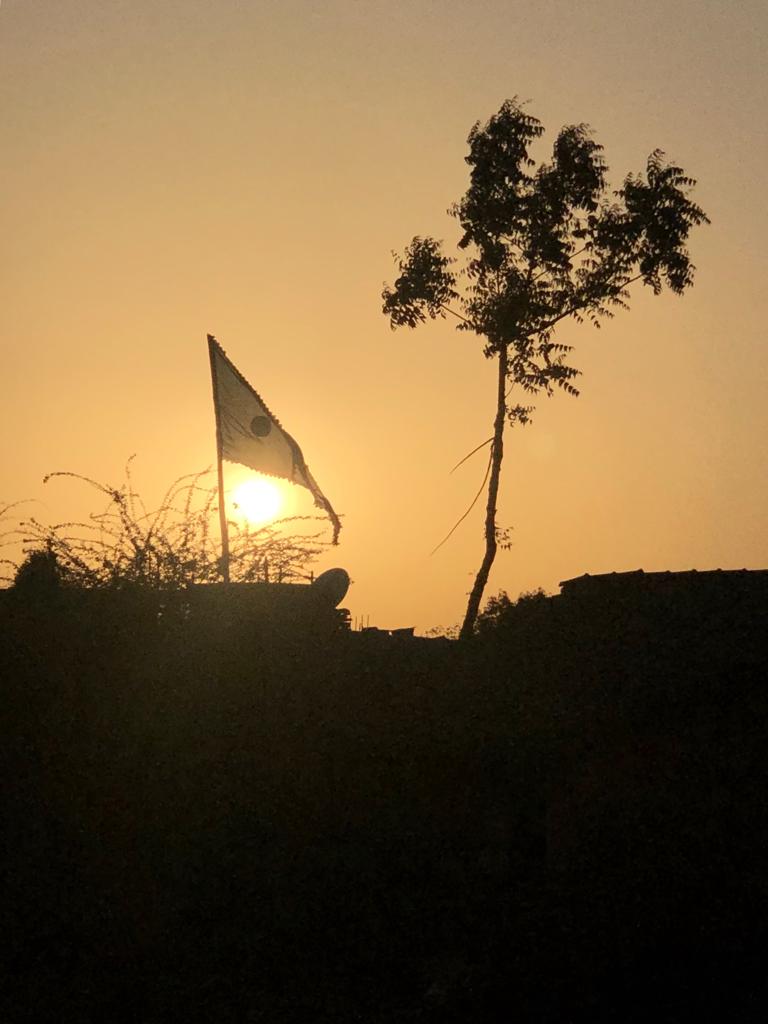 Kanti Lal Roat, the BTP candidate from Banswara: Jaipal Munda said the Adivasis will respect both, its own flag and that of the nation. The two must co-exist. Why were we not allowed to hold a celebration in honour of Jaipal Munda? Credit: Pooja Arya

Meeting this challenge is not easy. The Bhils have been assimilated within the Hindu fold over a long period of time and this is evident everywhere. Stopping at a hut that houses a small school in Malmattha village, Roat asks for the images of Durga and Ram on the wall to be covered up before he speaks, but acknowledges there is a limit to how far they can go. Bhil women, he notes, wear the ghunghat, but that is not something the party is willing to challenge yet.

What the party is able to do is to turn RSS’s own tactics against it. To attract the Bhils, the Sangh has been using traditional narratives such as the legend of Bhilu Rana, a Bhil chieftain who is believed to have fought alongside Maharana Pratap.  It has also refurbished and massively expanded a memorial to commemorate the Bhil martyrdom at Mangarh, often referred to as the Jallianwalah of the Bhils.

Hari Ram Meena, a retired police officer and writer based in Dungarpur, has written an account of this in his book Dhuni Tapey Teer (When Arrows Were Heated Up). It describes how in 1913, two British commanders ordered the Bhil Mewar Corp to fire on a gathering of 1,500 Bhils, led by their religious leader Govind Guru. Meena tells me, “The BJP might have built a big memorial, but if you look at it you’ll see that the statue of Govind Guru is dwarfed by one of Lord Hanuman.”

Meena’s awareness of the RSS’s intentions is shared by BTP candidates. “We revere Govind Guru but these icons are being used by Hindutva groups to colonise tribals,” Roat warns his audiences. The icons that don’t suit the RSS, he adds, are ignored.

Roat’s referring to the events of last August. On World Indigenous Day, the Bhil Vidyarthi Morcha was denied permission to celebrate the life of the Oxford-educated Indian hockey Olympian Jaipal Munda, the only tribal member of the constituent assembly. “Why should we be denied the right to celebrate modern heroes who spoke of the unity of tribals, of our unique culture and our own flag? Munda said the Adivasi flag will co-exist with the nation’s flag and we will salute both,” Roat says.

The impact of his words, and his campaign, is not lost on his rivals. The BJP candidate, RSS hardliner Kanti Lal Katara, suggests the reason the BJP’s hold over the tribals has slipped is because his predecessor, chosen by ‘Vasundhraji’, was “too liberal in his thinking”. It is indicative of the seriousness of the BTP threat that he simultaneously accuses the party of bringing a Naxali vichardhara into Rajasthan and working at the behest of missionaries.

The Congress is even more worried. Having seen this traditional stronghold being impacted by the RSS’s work, it has managed a comeback in the recent assembly elections. But now it fears the BTP’s impact will not just be restricted to Rajasthan and its seven candidates in North Gujarat will also hurt the Congress’s chances there. For Tarachand Bhagora, a three-time MP, the BTP is not a Naxal or a missionary plot, “Mark my words, the BTP is a creation of Vasundhraji, it’s a BJP proxy.”

In the face of repeated bids to slander and split his party, Kanti Lal Roat responds with a quiet confidence, “We are fighting to win a ticket to parliament, but even if we don’t make it we know we will decide who will. We will continue to play a big role in the politics of this region.”