Why Tamil Nadu Voted the Way It Did

Bucking the national trend, Tamil Nadu once again thwarted the BJP’s desperate attempts to gain a foothold in the state.

Tamil Nadu has much pretty much repeated its verdict of the 2014 elections this time. In doing so, the state continues to remain a tough nut for the Bharatiya Janata Party to crack.

Bucking the national trend, Tamil Nadu once again thwarted the BJP’s desperate attempts to gain a foothold. In 2014, the state gave a huge victory to the AIADMK to keep the BJP at bay and this time, it had voted for the DMK-led front for the same purpose.

A clean sweep in the Lok Sabha elections while seeing a neck-and-neck race in the by-polls to 22 assembly constituencies where the DMK won 13 seats and the AIADMK nine perhaps has something to say – that the anti-Narendra Modi wave is no myth in this state. Hours before the results were being announced, Tamil Twitter trended #GoBackModi yet again; only with the results it emerged that the trend was more than just a hashtag.

The BJP had left no stone unturned to try and break this jinx. Prime Minister Narendra Modi visited Tamil Nadu at least four times between February and April in a bid to woo voters. Even then, the BJP lost its lone winner of 2014 elections – Pon Radhakrishnan from Kanyakumari.

In all five constituencies where it contested, the BJP was defeated by a margin of lakhs – ranging from below two lakhs to above three lakhs. These were classic ‘can only happen in Tamil Nadu’ kind of victories too. In Coimbatore, Communist Party of India (Marxist)’s P.R. Natarajan defeated BJP’s C.P. Radhakrishnan by over a margin of 1,79,000 votes. In Ramanathapuram, Indian Union Muslim League’s candidate K. Navaskani defeated BJP’s Nainar Nagendran by a margin of over one lakh votes.

The 2019 elections in Tamil Nadu were a game changer in many ways. It was the first major election not led by the two tall leaders – DMK’s M. Karunanidhi and AIADMK’s J. Jayalalithaa.

The election also saw a realignment of forces. In 2014, AIADMK contested on its own while the DMK led an alliance that predominantly had Dalit and Muslim parties. The BJP-led alliance comprised parties including Vijayakanth’s DMDK, PMK and MDMK. The Congress went alone. In 2019, the BJP, DMDK and PMK went with the AIADMK while MDMK and Congress along with Left joined the DMK-led alliance.

Some parties in the AIADMK front had hoped that the realignment would work in their favour. The BJP’s candidate from Sivaganga, H. Raja, repeatedly made a point about how the AIADMK vote bank will help consolidate his victory and the arithmetic was in his favour. But the electorate clearly had a different idea.

The 2019 election also saw the emergence of several new forces which perceived a vacuum in the state. Some players could still stick around for more experiments, while some have been decisively written off.

After its tremendous success in the RK Nagar by-poll – a constituency held by Jayalalithaa – T.T.V. Dinakaran’s Amma Makkal Munnetra Kazhagam surprisingly came a cropper this election. Kamal Haasan’s Makkal Neethi Maiyam did relatively well in urban areas but had fared poorly in rural areas. Naam Thamizhar, a Tamil nationalist party led by Seeman, made heads turn by fielding candidates that showed promise. The party gave 50% reservation to women candidates. Yet, essentially it was a stiff fight between the AIADMK and DMK led alliances, relegating other forces to a distance third position.

Several factors worked in tandem to make Tamil Nadu vote the way it did.

The state takes pronounced pride in its Dravidian legacy. After it first aligned with the BJP in 1999, the DMK had to repeatedly offer an explanation on how the alliance cannot be seen as moving away from core Dravidian ideals. Despite its not-so-hardcore Dravidian approach – the AIADMK was the first to align with the BJP in 1998 – the party was still seen as one. Or perhaps, Jayalalithaa – a characteristically self-important leader – gave the AIADMK an aura of federalism that remains a quintessential aspect of Dravidian legacy.

From her hugely popular slogan – ‘Modi or this lady?’ – in 2014 to AIADMK minister Rajendra Bhalaji’s infamous quip – ‘Modi is our daddy’ – in 2019, the downfall of the AIADMK as a party with a strong federal identity cannot be more spectacularly evident. Jayalalithaa also clearly nurtured the ambition of making it to the national level. For her unlikely successor, Edappadi Palaniswami, retaining power in the state was a struggle in itself. Besides, to even remain relevant, the party needed to win a considerable number of seats in the by-polls to assembly constituencies.

The rise of people’s movements

The last few years saw a phenomenal rise in people’s movements across the state. There were spontaneous protests led by indigenous leaders against what were seen as ‘anti-people’ projects, including the Koodankulam nuclear plants, the hydrocarbon project in the Cauvery delta and the introduction of the NEET medical exam. The movements saw an inherent enemy in the BJP, which had either introduced or extended the projects. By virtue of their proximity to the people, the mass movements, despite not being part of the electoral mainstream, played a role in creating the mandate.

It comes as no surprise that the DMK-led alliance had a comfortable haul in the Cauvery delta, just as it did in the western belt known for being an AIADMK bastion. In Pollachi, recently rocked by a scandal, DMK won after a gap of 39 years. With only two MLAs in six assembly constituencies of the Thoothukudi Lok Sabha seat (which had witnessed huge protests over a Sterlite plant last year), Kanimozhi surged ahead of BJP president Thamizhisai Soundarrajan by a margin of over three lakh votes.

In Palaniswami’s own hometown Salem, farmers protested against the eight-lane green corridor project. Ironically, PMK’s Anbumani Ramadoss, who went to court demanding the scrapping of the project, joined hands with the BJP and the AIADMK that were keen on bringing it. Anbumani maintained that the party would not change its stand on its opposition to the project, but lost the election to DMK’s Senthil Kumar.

This election was undoubtedly an acid test for M.K. Stalin. Facing his first election without the edifying presence of his father, Karunanidhi, Stalin passed with flying colours. He not only stitched together a formidable coalition, Stalin also toured the length and breadth the state to aggressively campaign for all candidates.

He also had to face criticism for handing the Congress a luxurious share of ten seats including Pondicherry. The party, however, managed to win almost all the constituencies except Theni where it fielded an outsider – E.V.K.S. Elangovan. Congress’s young leader Jothimani took a definitive lead over AIADMK veteran and former deputy speaker M. Thambidurai in another AIADMK bastion, Karur. Jothimani’s sensational victory should also be attributed to the hard work put in by DMK’s Senthil Balaji, who had managed to retain the Aravakuruchi assembly constituency for himself. Senthil Balaji shifted to AMMK from AIADMK after Jayalalithaa’s death and joined the DMK in December 2018. 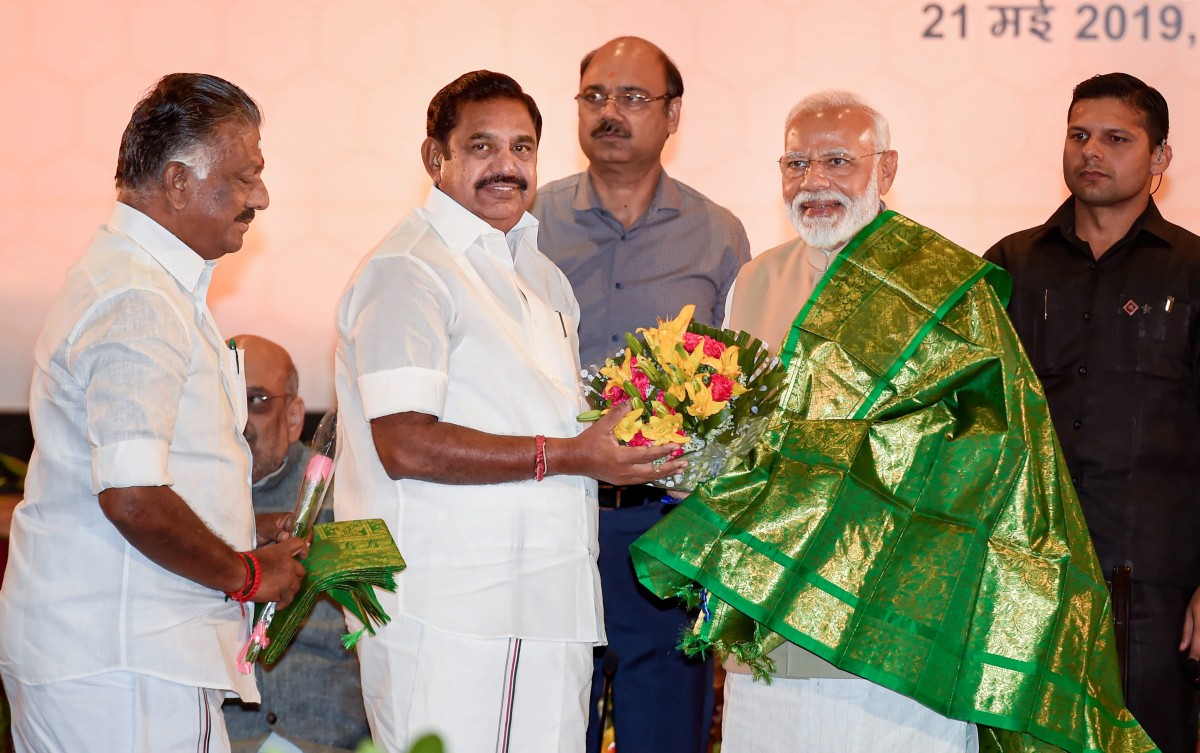 A large share of Left seats – decimated to single number this election – came from Tamil Nadu. All the four candidates fielded by the Communist Party of (India) Marxist and Communist Party of India in Madurai, Coimbatore (CPI-M) and Nagapattinam, Tiruppur (CPI) had a clear decisive victory. Tamil Nadu was one of the very few states where Congress and the Left managed a decent show. They owe it to the strength of the coalition and the evident anti-Modi sentiment.

The DMK did hope to win assembly seats in enough numbers to dislodge the AIADMK dispensation – Stalin kept talking about a ‘change’ in the state after the elections in his campaign meetings. In 2021, the assembly elections might turn out to be another acid test for his leadership.

Road ahead for the AIADMK

For now, the AIADMK faces no immediate threat to its government. But the party has paid the price for aligning with the BJP, something Jayalalithaa had steadfastly refused to do either in 2014 or in the assembly elections in 2016. Her ambitions for a national role could have come in the way. But the AIADMK cannot possibly extricate itself from the alliance, given BJP’s huge success across the country and the party’s own need to depend on a leader like Modi. Notwithstanding its show in Tamil Nadu, both Palaniswami and Paneerselvam congratulated Modi for the victory, calling it a result of his ‘patriotism and public service’.

The BJP too is in no mood to relent. Accusing a ‘negative campaign’ of undoing the BJP’s chances in Tamil Nadu, Thamizhisai Soundarrajan said the electorate would soon ‘regret’ this decision.

The party, she said, will introspect and take necessary steps to reverse its luck in the state. But that is for another election.