What the Winners of the 2019 Lok Sabha Election Lost

The new government is likely to face spiralling problems both on issues they tried to marginalise and on ones they sought to capitalise on.

The sweeping victory of the BJP in the 2019 elections has left many terrified about what this means for India’s future and their own. But so far, most commentaries have treated the saffron party’s win as both an epic and a foregone conclusion. This, however, tells us very little about what happened and what will happen – because it ignores the successes of the opposition and the failures of the BJP during this election season.

That wasn’t a typo. In the year-long run-up to the elections, there were some key successes for the opposition (in which we include both the party and the non-party opposition).

First, there was a blossoming of open and deliberate criticism of the RSS/BJP, which is in sharp contrast to the silence and muted responses between 2014 and 2018. As a result, the BJP essentially conceded on issues like employment, agrarian distress, forest rights, “black money” and even “acche din“. Generally, instead of defending its position on these issues, the party only made a muted appeal for a “second chance,” and then deployed its raw power over the media to try to stop the discussion. But this has left the public debate on these issues open.

Second, a range of new political forces – Ambedkarite and Bahujan movements, Adivasi organisations, Left and other student/youth groups, progressive Muslim and women’s groups and regional cultural forces – have emerged that explicitly attack Hindutva, majoritarianism and the RSS. These are not “urban liberals” but grassroots, often mass movements across the country that are increasingly allying with each other. While these alliances had not reached the level of maturity necessary for this election, they are creating a grassroots challenge to the saffron brigade as never before. 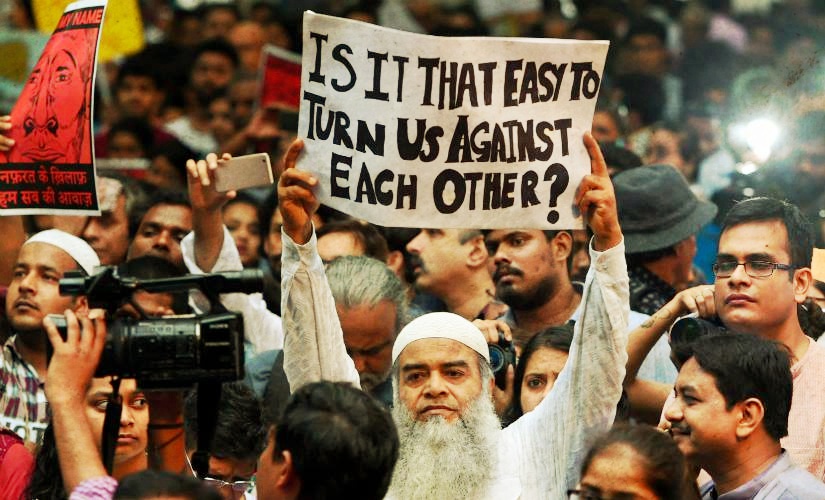 Lynching, hate crime, encounter killings, communal deaths are no longer trigger words in India – they have become as commonplace as the next ‘jumla’ that the ruling power drops down our throat. Photo: Reuters

Third, dissenting media outlets – in English, Hindi and other languages – had emerged after 2014 and expanded over the past year. These could not match the pro-BJP outlets in reach, but they nevertheless showed a capacity to define trending news. The joblessness story, the hurriedly convened silent-PM press conference, the puff interviews and the defensive tone of Narendra Modi’s later speeches all suggest that dissenting media was worrying the BJP. This space will probably be among the new government’s first targets.

Finally, a range of decentralised technological experiments emerged, such as the ‘Missing Voters‘ campaign and distributed social media production. These experiments contributed to the growth of criticism and dissent.

Also read: What Did India Really Vote For?

Of course, none of this could dent the BJP’s electoral performance. Nevertheless, these developments are likely to lead to two problems for the party in the days to come.

First, the BJP campaign was far narrower this time. Since the party was trying to marginalise its own claims from 2014, it mainly campaigned on “strength” and “security” – both defined in terms of repression, hatred and violence. But this is only a temporary resolution to a contradiction that will not go away. Both the BJP’s own campaign and post-poll data seem to show that its voters saw these elections as “national”. They felt the primary “national” issues are “security” and “strength” and that the BJP is best at these things.

However, this does not mean that other issues vanish, and unlike 2014, the BJP’s mandate does not encompass them.

Hence, the opposition may find that opportunities to mobilise on them will rapidly return. Even on supposedly vote-winning welfare schemes, there will be tremendous pressure on the BJP to deliver in its “second chance”, since these schemes are – by comparison to previous governments’ efforts – actually small and tokenistic (distinguished only by the amount of money spent on marketing them).

Also read: Why the BJP’s Hindutva Experiment Failed in Kerala

Moreover, the “security” narrative itself has a short shelf life. Unlike ‘ground’ issues, it is an issue that is only seen as immediately relevant to most Indians when it is constantly shoved on them by the media and political campaigns (as has happened recently). But this may become more difficult. Escalating further with Pakistan, for instance, will not lead to ‘security’ but only to other countries intervening, since an Indo-Pak war is not in any country’s interest.

On the home front, the NRC and other codes for the politics of anti-Muslim narrative are far more likely to lead to chaos and violence than any straightforward outcome. The reality is that this notion of “security” will only lead to more conflict and hence more insecurity, not less. This is the BJP’s core contradiction – one they can keep in circulation but never resolve.

As such, the new government is likely to face spiralling problems both on issues they tried to marginalise and on ones they sought to capitalise on. This is likely to lead to a more fluid political situation than is apparent at present. Both the BJP and opposition forces may soon find that this time around, there are no honeymoons.

Biju Mathew is the chair of the executive committee of La Makaan, Hyderabad, and the secretary of the National Taxi Workers Alliance in the US.

Shankar Gopalakrishnan has written and worked on issues of political economy, development, natural resource politics, communalism and workers rights. His most recent book is Understanding the RSS and the Sangh Parivar, from Aakar Books.