PM Narendra Modi. In the background is a bulldozer at Delhi's Jahangirpuri. Photos: PTI.

New Delhi: Some believe him to be a modern-day Nero, while several are happy to regard him as the Kalyug avatar of the deity Ram.

At the helm of the Union government for eight years, Narendra Modi has been the most-polarising prime minister India has seen since its Independence. Having steered the Bharatiya Janata Party, to two successive and comprehensive victories in parliamentary elections, he is the symbol of a ‘New India‘, both within and outside the country.

His supporters view the prime minister’s larger-than-life personality as part of an iconoclastic politics that developing India desperately needs at the moment. His critics, comprising mostly a discerning bunch of democrats and Indian minorities, believe that he has used his chair to only cement a kind of divisive demagoguery that may break India in the future.

As his government celebrates eight years in power, the BJP has been counting its achievements.

It has claimed that it will fulfil or already has fulfilled all its promises before the 2024 Lok Sabha polls. Many of those fulfilled promises are typically exclusionary. The dilution of Article 370, promulgation of the Citizenship Amendment Act, criminalisation of triple talaq, or even canvassing for a Ram temple in Ayodhya where BJP supporters demolished a 16th century mosque in 1992 are all part of a Hindu nationalist political agenda that has been trying to firm its grip over the Indian polity since before Independence.

Modi’s other set of promises – related to his claim of making India an economic powerhouse and a corruption-free state – remains largely unfulfilled. But those have conveniently been forgotten by the BJP as it celebrates its eighth year as the most-dominant political force in India.

Beleaguered opposition forces, on the other hand, have been pointing out its failures in areas of economy, governance, and social harmony. They have been drawing attention to stark facts that the unemployment rate, poverty level, inequalities in income, prices of essential commodities, or decay at financial houses and democratic institutions have all reached an unprecedented high during Modi’s regime.

But Modi’s Hindu nationalist political project appears to be superseding all of these and more, in popular perception. 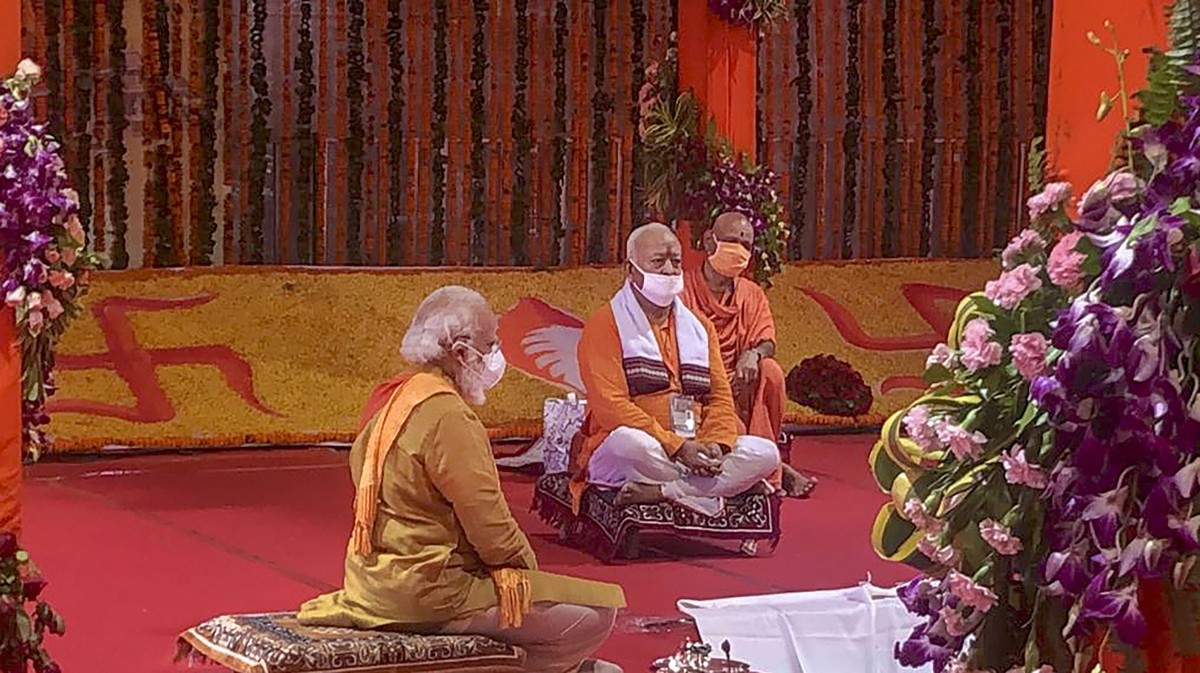 The ease with which a majority of voters in the last two elections have cornered their immediate economic interests to side with the BJP speaks volumes about Modi’s leadership.

But one has to ask what makes Modi’s era so different from the previous regimes. What is it that draws people to a party which has openly espoused a socially-divisive, majoritarian rhetoric?

If the last eight years are taken into account, three broad aspects of Modi’s rule mark a distinctiveness that India had not witnessed during previous regimes.

First, the BJP under Modi has led Indian people into a state of collective amnesia. It counts its achievements day-in and day-out. From a “free” vaccination programme to the installation of escalators in railway stations, the BJP projects all aspects of governance as ‘first-of-its-kind’ steps. Each and every move that the BJP has made in the last eight years has been shown as the current prime minister’s achievement, as something that previous prime ministers or other political parties were incapable of conceptualising, let alone doing.

Modi’s leadership is as much about counting its achievements as it is about making people forget about past achievements of India or its leaders – assuring that every step taken by Modi is a “first” for the country.

It is undeniable that no other party has had the uncritical support of corporate houses like the BJP. A flush-with-funds BJP has the power to mount each of its decisions as “path-breaking” through sophisticated public relations machinery. Politics under BJP is one grand corporate event after another. The larger-than-life personality of the prime minister only adds the right flavour that these events need in order to draw maximum attention.

The process of pushing Indians into this state of amnesia is also militantly supported by a concerted attempt to erase India’s history and replace it with a fake version of events in India’s past that conveniently suits BJP’s political interests. This canceling of India’s complicated, yet syncretic, history is not brought about by merely rewriting history textbooks in schools and colleges – a process favoured by the previous BJP government under Atal Bihari Vajpayee. It is undertaken concertedly through a combination of rewriting textbooks, circulating fake messages on social media platforms, and perpetuating falsities with the help of leaders of the BJP and its affiliate organisations across the country.

By making Indian people revisit traumatic events of the past without giving them historical understanding, the BJP has mastered the art of (mis)using history for political gains. The capital-rich BJP can rightly take the credit for an unprecedentedly efficient use of technology in such campaigns.

Also read: Mughals Are the Latest Villains of BJP and the Hindutva Brigade

Second, never has India seen such an organised campaign against opposition forces and critics.

Modi’s regime will be remembered for criminalising dissent like no other government. The use of draconian laws like sedition or UAPA against dissenting students, leaders, or minorities has drastically risen. Such political practice began in universities where dissenting students were slapped with charges of sedition and matured when the investigative agencies began to crack down on opposition leaders in different cases. In its eighth year, India’s press freedom index is an all-time low, with many journalists facing severe charges under the Indian Penal Code.

These eight years have also been the period when investigative agencies appeared to whitewash sins of BJP leaders. Be it in hate speech or rioting, their alleged involvement in lynchings and murders, or charges related to high-end corruption, the BJP leaders have largely been let off or have avoided any form of scrutiny. Such a trend has been so clear that many opposition leaders have chosen to join BJP’s ranks to avoid being under the scanner of investigative agencies that seem to have totally given up their autonomy.

It was the BJP under UPA rule which criticised the Central Bureau of Investigation (CBI), India’s top investigation body, of being a “caged parrot”. However, these agencies have shown hardly any signs of escaping the cage during Modi’s rule. In fact, most of these agencies have only shown their tendency to genuflect in front of a clearly vindictive Modi government.

Two important institutions of democracy – media and judiciary – have helped the Modi government achieve total dominance over institutions, even as criticisms against it in different corners have become louder by the day. If there are any real “firsts” of the Modi regime, it’s the complete caving-in of big media. Never has Indian media been seen advancing the government’s interests like it has during Modi’s rule. Often, the media can be held equally guilty of promoting social divisiveness and majoritarianism.

Also read: For Recognising the Signs of Fascism, a Teacher Must Be Suspended

In the same period, the judiciary has done nothing to exude any sort of confidence among people. Barring a few important judgments, the entire judiciary has ruled largely in favour of the government, be it the Babri Masjid-Ram Janmabhoomi order or more recently its conduct in the Gyanvapi Mosque case. India has had a history of judges ruling against the government’s undemocratic orders, the best example of which is Justice H.R. Khanna’s dissenting judgment in the famous habeas corpus case during the Emergency that former Congress prime minister Indira Gandhi had imposed. However, that norm appears to have drastically transformed among the high echelons of Indian judiciary in the current era. Finally, and most importantly, the Modi government has spearheaded the process of replacing the constitutional nationalism that most other governments adhered to with its own brand of cultural nationalism. Politics, as it is projected by Modi, is no more only about development work, governance and welfare – but also about reclaiming India’s “lost” glory. The BJP has always understood India as a strictly Hindu nation, which experienced a golden age during the regimes of different Hindu rulers, but all of which was ruined by Muslim invaders. The natural corollary of such an understanding has reflected in its political practice that has sought to alienate Indian Muslims from the mainstream.

Modi has re-energised the Sangh Parivar’s majoritarian agenda with an unapologetic vigour. By taking a decisive step to deny Muslims any electoral representation in the BJP, he has chalked out a political formula to consolidate Hindus. He has been reaping benefits with this clear-cut and raw electoral strategy.

The cultural nationalism project is not merely electoral but has seeped into every level of the BJP. Workers are required to constantly invoke Hindu myths, reclaim alleged Hindu shrines from Muslim hands, exhort people to own up to their Hindu identities by frequently organising religious events.

The saffron party’s pursuit of cultural nationalism has been so strong that it has largely superseded historically-significant political contradictions of caste, patronage, and class among the Hindus, leaving barely any space for politics derived from social justice, representation, or welfare.

A large section of opposition forces which had hinged upon the values of democracy to practice its politics have found themselves lost in the face of such Hindutva aggression.

At the moment, BJP under Modi dominates over all other political forces. And it will continue to do so in the near future if the opposition forces do not have an alternative and convincing cultural answer to BJP’s brand of cultural nationalism. Modi and his government will not only be remembered for using these combinations of factors to transform the BJP, but also for instigating a large section of Indian people to claim their space in power politics.