Will Droupadi Murmu Remain a BJP Electoral Ploy or Help Unseen Adivasis Be Seen at Last?

BJP is sure to celebrate its own decision to get an Adivasi President elected more than Murmu’s own achievements as a loyal political worker. It remains to be seen if they will let her have her own voice. New Delhi: India got its first Adivasi President on July 22, as expected. As the Bharatiya Janata Party-led National Democratic Alliance’s candidate, Droupadi Murmu had always been much ahead in the race than her competitor, the opposition’s candidate Yashwant Sinha. However, with the Shiv Sena and Jharkhand Mukti Morcha, and a substantial number of opposition legislators, also voting for her in the Presidential polls, her victory proved to be of a much bigger scale than what was imagined initially.

The BJP should be credited for imagining an Adivasi in India’s highest constitutional office – something that no other party, including the Atal Bihari Vajpayee-led BJP, could think of in 75 years of independent India.

With her elevation to the President’s chair, however, opposition forces and civil society activists have raised a pertinent question.

Will Murmu’s victory translate into making Adivasi lives better in India, or will she prove to be yet another “rubber stamp” head like the outgoing President Ram Nath Kovind? Kovind, a Dalit, never hestitated to wear his primary identity – that of a BJP footsoldier – on his sleeve and ensured that his office remained under the strict watch of Prime Minister Narendra Modi.

Unlike his predecessor and Dalit counterpart K.R.Narayanan who almost made a virtue out of his habit of differing with the Union government in sensitive matters, Kovind showed no inclination to exhibit the slightest independence of his office. His stint at the Rashtrapati Bhawan thus was non-controversial and uneventful, although some may also call it vapid.

Will Murmu follow Kovind’s footsteps? Only time will tell. Given her record of returning the controversial Chhotanagpur Tenancy and Santhal Pargana Tenancy Bill as the Jharkhand governor, she may as well prove to be different from Kovind. But what can’t be contested is that the Modi-led BJP will surely use her candidature to gain political capital, especially among Adivasis who continue to live in the fringes of Indian society.

As is its wont, the Narendra Modi-led BJP has planned celebrations for Murmu’s victory in India’s one lakh villages.

BJP party workers and leaders will also march from its party headquarters to Rajpath to commemorate the election of India’s first Adivasi president. Known for dogged political work on the ground, the saffron party will ensure that it will celebrate its own decision to get an Adivasi President elected more than Murmu’s own achievements as a loyal political worker for more than three decades.

Over the last eight years, BJP has aced the politics of representation. Each of its appointments in high constitutional offices was done with electoral calculations in mind. It nominated a non-Jatav Dalit as the presidential candidate at a time when it was gearing up for the Uttar Pradesh polls. It also elevated its senior Other Backward Class leader M.Venkaiah Naidu to the post of vice-president, a decision that was in line with its outreach campaign among OBC communities across the country.

Now, it has also nominated Rajasthan Jat leader Jagdeep Dhankhar for vice-president a year ahead of Rajasthan polls. With Jats accounting for almost 15% of the electorate, BJP hopes to consolidate in its favour a community which has traditionally been with the Congress. At the same time, Dhankar’s nomination will also help the saffron party in reaching out to the dominant Jats of Haryana and western Uttar Pradesh who had distanced themselves from the BJP during the farmers’ agitations.

By selecting Murmu, a Santhal Adivasi, as President, BJP has also challenged Hemant Soren-led Jharkhand Mukti Morcha’s stronghold over the Santhal community, which plays the most vital role in state elections. 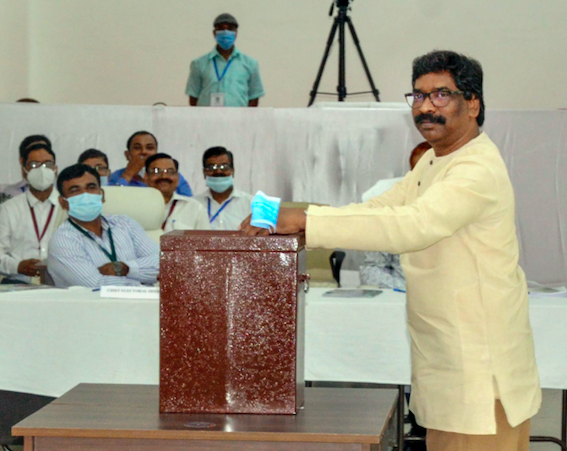 Jharkhand Chief Minister Hemant Soren casts his vote for the election of the President, at Jharkhand Assembly in Ranchi, Monday, July 18, 2022. Photo: PTI

If not in high offices, the saffron party has also taken care to acknowledge the contributions of marginalised communities in its annual list of Padma awardees – all of which has helped the BJP create a perception of being an accommodative party despite the fact that it has actively denied any substantive representation to Muslims. Such is the othering of the minority community that there is not even a single Muslim MP or MLA from the BJP stable at the moment.

More importantly, the added emphasis on representation in each of its decisions underlines the importance that it gives to its outreach programme among communities which have still not warmed up to the BJP and its Hindu majoritarian politics.

In contrast, the opposition forces, especially the BJP’s principal national rival Congress, have been busy mostly defending their  frontiers. For Congress, these frontiers are already fraying. When the grand old party occasionally makes political moves, they are mostly not directed towards getting incremental votes and end up consolidating only its traditional voter base. The only exception, perhaps, is Chhattisgarh chief minister Bhupesh Baghel, who has been trying to breach BJP’s bastions through his government’s welfare measures.

Sajjan Kumar, a New Delhi-based political analyst whose research focuses on BJP’s attempts to consolidate marginalised communities – a concept that he terms ‘subaltern Hindutva’ – says, “The fact that the top three posts (President, Vice-President, and Prime Minister) of the Indian Republic is represented by leaders belonging to subaltern communities has given the Indian Right a decisive edge over the opposition parties.”

“Election of Droupadi Murmu signifies a new phase in Indian democracy wherein the legitimacy of the regime is deeply ingrained in the logic of subalterneity,” he said, and cautions that dismissing her election as “mere symbolism” may be reductionist.

“Subaltern communities are undergoing an internal churning; they are seeking tangible representation. While this is good for the representative aspect of Indian democracy, it should also force the Congress, the prime opposition party, to radically revisit its strategy to retain its relatability with the weaker sections,” he said.

Adivasi scholars and activists have welcomed BJP’s decision to nominate Droupadi Murmu as the Presidential candidate.

However, they also believe that merely representing Adivasis by appointing one of them in a top position may not address their primary questions of dignity and justice. Moreover, they say that although the BJP has increased representation of marginalised communities in their ranks, it has also denied them any tangible empowerment. 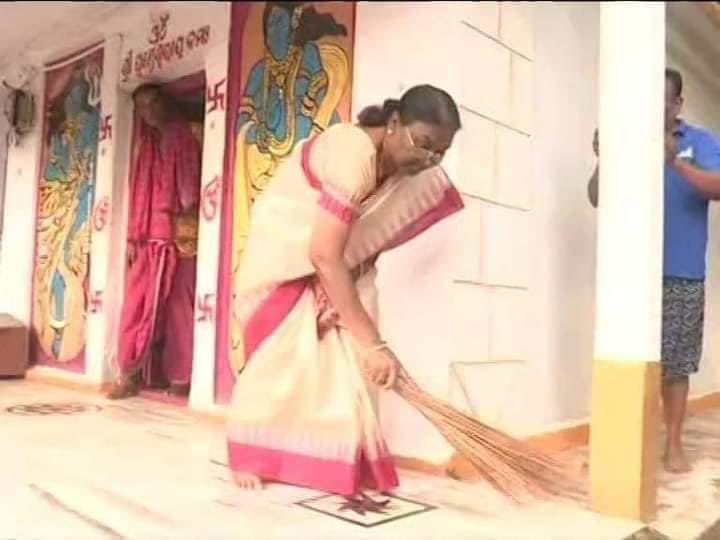 “Murmu was shown by the BJP as cleaning a temple with a broom in her hand. The symbols of Hindu deities provided the background of the photograph. BJP expects Adivasis to completely espouse Hinduism and Hindutva. It does not acknowledge the diversity of faith among Adivasi communities,” said Rajni Murmu, who teaches at Godda college in Jharkhand and has been active regarding various Adivasi issues for many years.

Scholars like Murmu believe that instead of acknowledging and accepting Adivasi culture and faith, BJP and the Sangh Parivar have been trying to appropriate them within the fold of Hindutva, strip them of their dignity, and crush their independence.

The logic of political appropriation aside, greater representation of Adivasis is also understood as an electoral arrangement – a quid pro quo – that the saffron party is looking to forge with Adivasi leaders than anything more.

Those who have been working for Adivasis’ causes point out that while BJP may congratulate itself in nominating Droupadi Murmu, their governments have mostly struck down or dismissed autonomous movements led by Adivasis. People like Father Stan Swamy (who passed away due to alleged medical negligence while in jail), Sudha Bharadwaj, or Surendra Gadling, all of whom have devoted their lives to improve the conditions of Adivasis, have been arrested under charges of terrorism in the Elgar Parishad case. Activists have pointed out several instances in which innocent Adivasis have been killed in fake encounters and falsely branded Maoists.

Similarly, they point out how the BJP government at the Union and states have tried to muzzle voices coming out of Pathalgarhi movement in Jharkhand or recently the Silger movement in Chhattisgarh, led by Adivasis. At the same time, they point out several instances in which the Modi government has attempted to dilute legislations like the Forest Rights Act and Panchayat (Extension of the Scheduled Areas) Act that guarantees Adivasis some degree of autonomy and power to take their own decisions. 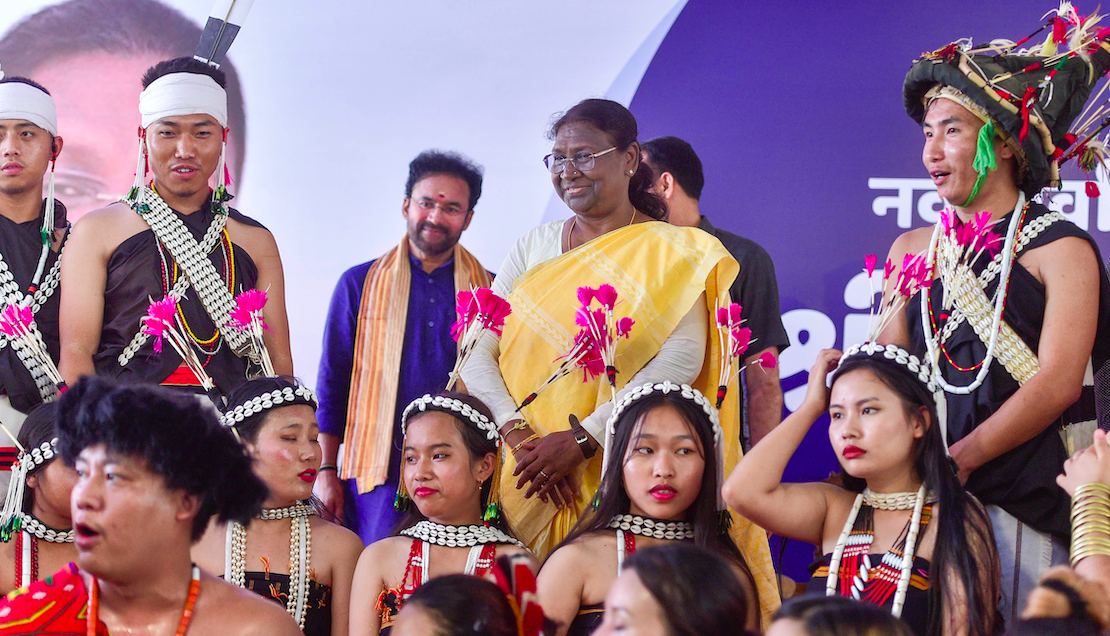 The Union government’s increasing push towards privatisation, increased miltarisation of Adivasi-dominated regions, propensity to extract minerals from native lands of Adivasis in states like Chhattisgarh, Jharkhand or Odisha, and attempts to include disempowering clauses in legislations like The Mines and Mineral (Development and Regulation) Act are also understood by many activists as BJP’s alleged doublespeak on Adivasi issues.

Former member of Jharkhand Commission for Women, Vasavi Kiro welcomes Murmu’s election, but also points out the reality of tribal people in the country. “The Adivasi-dominated regions are classified by many as also MAM (malnutrition, anaemia, malaria)-dominated. Imagine, nearly 70% Adivasi women are anaemic and around 112% children don’t live to see their fifth birthday. Every year, more than 1.5 lakh Adivasis die of malaria annually in India.”

“Adivasi India is an unseen India. The literacy rate among Adivasi women is only 34%. Similarly, among Adivasi men the literacy rate at 49.2% is much below the national average of around 75%. The disaggregated data given by the Union government bare the brutal reality of adivasi India but it has been criminally neglected,” she said, adding that in that sense Murmu will now occupy “a crown of thorns”.

Yet, by nominating Murmu to the highest constitutional office in the country, the Modi government and BJP has given much-needed dignity to Adivasis. It remains to be seen whether they are willing to let Murmu have a voice of her own.