Dropping ‘Abide With Me’ Should Not Come as a Surprise

Discarding a wonderful hymn with a universal and humanist message fits in with what New India wants to be. 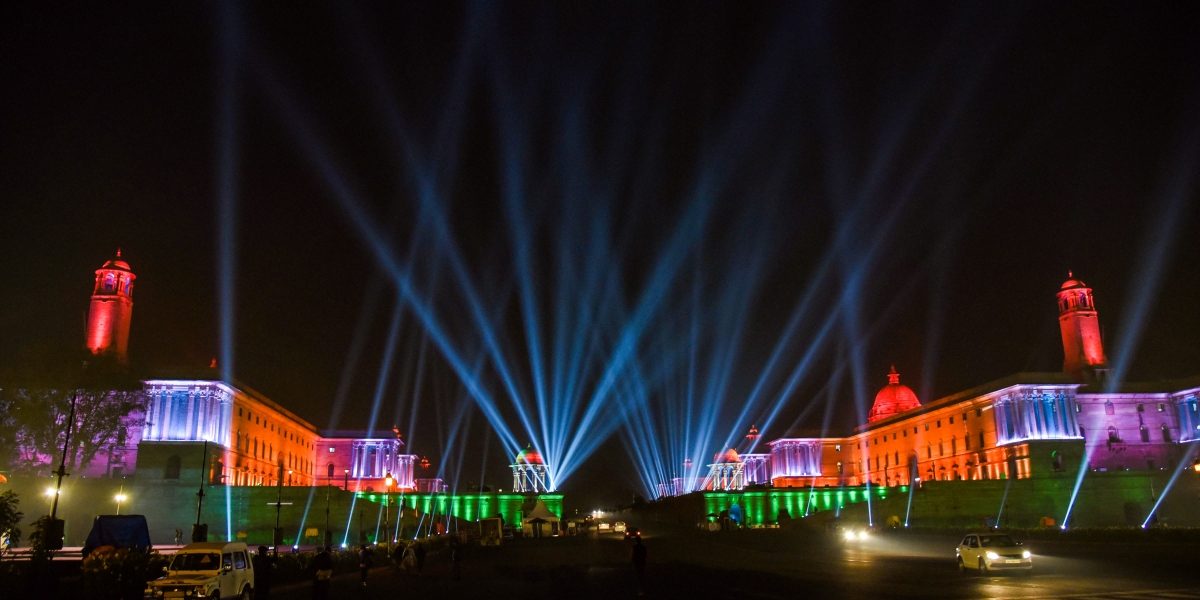 Government buildings along Rajpath illuminated with tricolour lights during rehearsals for the Beating Retreat ceremony ahead of Republic Day, at Vijay Chowk in New Delhi, January 24, 2022. Photo: PTI/Shahbaz Khan

The decision to drop the hymn ‘Abide with Me’ from Beating Retreat at Rajpath has come as a shock for many Indians. Social media says it will be replaced by a Bollywood song performed by young marchers of the armed forces, a prospect too awful to contemplate, much less witness. But a more sober report says that the band will play ‘Ae Mere Watan ke Logo’ by Lata Mangeshkar, which was written by Kavi Pradeep, a deshbhakti expert much admired by the Sangh – he got the Dadasaheb Phalke Award during the A.B. Vajpayee government.

As we know, ‘Abide with Me’ was Gandhiji’s favourite hymn and when Beating Retreat parades began, the Government of India added it, not just in honour of the Mahatma but also because it is such a wonderful hymn, solemn and fully in the spirit of the Retreat. It never fails to bring a tear to the eye, as the ceremony ends against the backdrop of the sunset. There is a gentleness to the proceedings, and none of the aggressive muscle-flexing and machismo of the Republic Day Parade, with its display of military hardware. I respect tradition as much as the next person, but it is time now, 75 years after Independence, to stop showing off our military prowess, more so since with all of those toys, we have not been able to prevent the Chinese from intruding into our territory.

‘Abide with Me’ is very familiar to millions of Indian students. This government and the BJP may think of it as a Christian or Biblical hymn, but it is sung in thousands of (non-missionary) schools all over the country. Nor is it colonial ― Gandhi was a keen student of the Bible and many of his convictions were influenced by the teachings of Christ, whom he called the “most active resister perhaps known to history” and “one of the greatest teachers humanity ever had”. He called him a votary of non-violence. All this while remaining a devout Hindu. He absorbed the best of every religion and subsumed it to emerge as an Indian. To the Sangh, though, Gandhi gave away too much to Pakistan, his greatest crime. They cannot denounce him openly, but they can undermine him and belittle his legacy.

But there is much more to this erasure. It breaks all connections with the past and puts the stamp of a new, Modified India but also shows a canny understanding that the past is not a vote-catcher anymore. The old elite, its values and worldview are no longer relevant in the India that has shaped up. What particular connection does ‘Abide with Me’ have? It was anyway imposed from the top, with no say of the masses. Doing away with it is no loss to Narendra Modi. And who cares for the noisy and raucous bunch of old types, tweeting away among themselves, whining about the good old days and the vulgar tastes of his followers and the masses in general? Their vote doesn’t count anyway. Bollywood, or any Indian song, will connect with everyone, the rural youth and the urban bourgeoisie (including the prosperous middle classes). Even if it is a non-filmi song, as long as it is widely known among Indians – the kind of Indians Modi banks on – it is fine. They are his biggest supporters and this will please them.

They suffered after demonetisation, unemployment has grown and COVID-19 hit them as much as anyone else, but they don’t care. Modi speaks to them directly, in their language. Had ‘Abide with Me’ stayed in the ceremony, they wouldn’t have known or bothered, but its going confirms their belief that he is bringing it all in tune with ‘Indian nationalistic values’. That is the central message that has been sold to them repeatedly over the years – that the New India is removing the old, the outdated, the ‘foreign’ and infusing it with Indianness. We can only guess what kind of WhatsApp forwards are being passed around with this move.

So while People Like Us hyperventilate about what Modi is doing every day – demolishing the Central Vista one day, removing the Amar Jawan Jyoti from its location another day, and altering Beating Retreat on a third day, he merrily goes on, uncaring of our views and talking directly to his own audience.

Why not do away with the ceremony totally, given that, like many other things associated with the Army, it is a colonial leftover? That won’t happen because it is one more opportunity to preen in front of an audience of millions who will adoringly see their leader on live television in yet another elegant outfit, while the anchors parrot “Masterstroke”, confirming their view that it is a great decision.

So one more tradition gone, one more link with the past broken. Many more will come. We can moan, wring our hands, express our disgust on social media. What would Gandhiji, who loved this hymn, have said? He would have quoted from the hymn itself:

I fear no foe, with Thee at hand to bless
Ills have no weight, and tears no bitterness