With DMK Office in Delhi, Is MK Stalin Eyeing a National Role As Counterweight to the BJP?

In a letter to DMK cadres in the context of the party office in Delhi, Stalin said, "[It is] a compelling symbol of the indispensable role that the DMK and the Dravidian model play in the national politics." 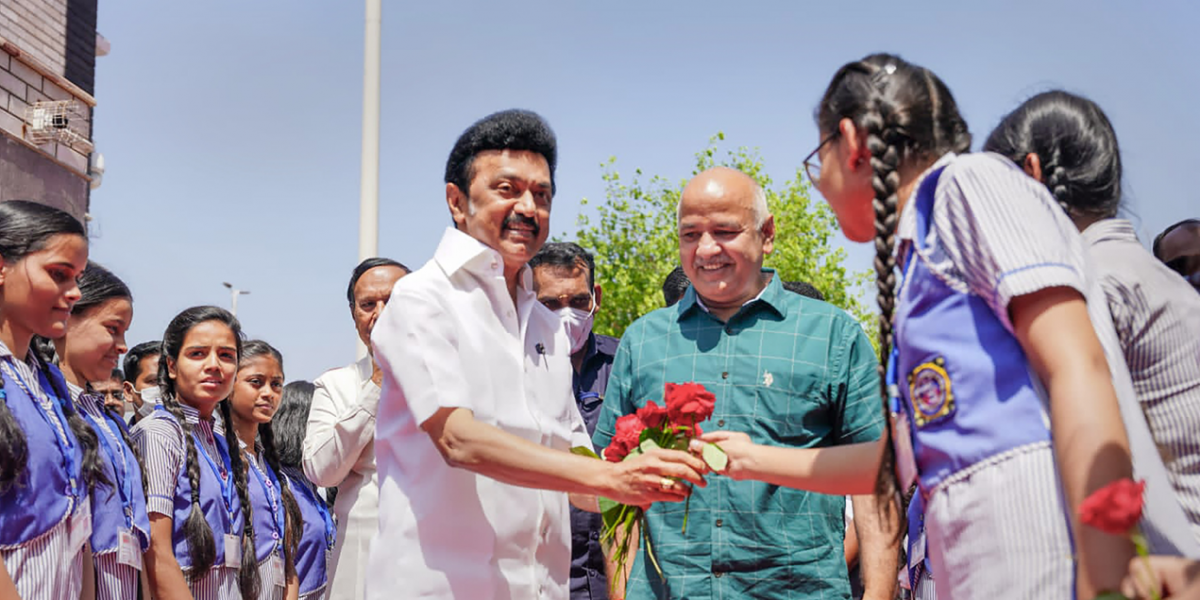 New Delhi: During his three-day visit to the national capital, Tamil Nadu chief minister M.K. Stalin also inaugurated the Dravida Munnetra Kazhagam (DMK) office on Saturday, April 2, which is being seen as the party establishing itself on the national front.

The chief minister has also been meeting a number of Union ministers and also opposition leaders from various parties.

He met Prime Minister Narendra Modi and Union home minister Amit Shah, even as he pushed his state’s demands for the release of pending dues under GST compensation and other government schemes with finance minister Nirmala Sitharaman and commerce and industry minister Piyush Goyal.

At the same time, he also met Delhi chief minister Arvind Kejriwal and visited the government schools and mohalla clinics, following which he declared that he replicate Aam Aadmi Party’s school model in Tamil Nadu.

Later, he also met Congress’s interim president Sonia Gandhi and other party leaders, who were among the most important guests at the inauguration ceremony of ‘Anna-Kalaignar Arivalayam’, DMK’s first-prominent office in New Delhi. The building has been named after DMK stalwarts C.N. Annadurai and Karunanidhi.

Stalin’s visit to New Delhi follows a five-day trip to the UAE, where he participated in the Dubai Expo, in what was seen as an extension of his aspiration to turn Tamil Nadu into a global investment destination.

The grand inauguration ceremony of the party office in New Delhi is also being considered as the chief minister’s attempt to assert DMK’s multifaceted significance in national politics.

Stalin himself doesn’t disagree. In a letter to the DMK cadre, Stalin said that the new DMK office in Delhi is a “compelling symbol of the indispensable role that the DMK and the Dravidian model plays in the national politics”.

Also read: Modi’s Raid Raj: ‘Janampatri’ Has Emerged as Key Instrument of Power Against the Opposition

DMK, with 23 MPs in the Lok Sabha, is currently the third-largest party in the Lower House.

From 2014-to 2019, the All India Anna Dravida Munnetra Kazhagam (AIADMK) had 37 MPs, also the third largest at the time, but never asserted its national importance in a way similar to Stalin.

Over the last few years, Stalin has been a flagbearer of the Dravidian model, gradually making his presence felt in the national discourse. He has positioned himself as a strong opposition leader with a political vision different from Modi-Shah’s Hindu nationalism-driven development model.

In his letter to the DMK cadre, the chief minister said that his meetings with the Union government’s representatives are intended to assert the state’s rights and take up the matter of pending allocations of promised funds to Tamil Nadu.

State autonomy has been the core of DMK politics ever since its formation. Stalin has revived the issue with renewed vigour after coming to power in the state, in the process not only placing himself firmly within the national opposition to the BJP but also as a strong Dravidian opponent to the AIADMK, an NDA ally, in Tamil Nadu.

In the process, he is cementing himself as the true inheritor of his father M. Karunanidhi’s legacy.

His governance has been geared towards delivering welfare measures and addressing the core concerns of the poor and generating employment by energising the MSMEs and facilitating private investments.

Stalin’s leadership in the state marks a significant shift in the way Tamil Nadu has played a national role. Over the last two decades, Tamil Nadu has maintained a fair distance from the Union government in keeping with its demand for the state’s autonomy. Both the Dravidian parties have sent their representatives to the Union government but never attempted to steer the political discourse at the Centre.

Such a stance was in contrast to the role of leaders like N. Chandrababu Naidu of Telugu Desam Party or K. Chandrashekar Rao of Telangana Rashtra Samithi, or the Left parties who from time to time have attempted to influence the direction of the national politics.

Speaking with The Wire, political analyst V. Krishna Ananth said, “The only time DMK made an ideological commitment to the Centre was during the V.P. Singh’s National Front government in 1996. Since then, it has been content with sending ministers to the Centre.”

Ananth, however, believes that Stalin has been signalling that the DMK will have a greater role to play at a time when BJP’s dominance over the national discourse has been growing.

Against such a backdrop, by firmly placing himself in the opposition camp that intends to pose a challenge to the BJP’s hegemonising tendency, Stalin has only taken the Dravidian model forward. Stalin’s solid emphasis on federalism and secularism during Modi’s regime appears to be an extension – although in a modified form – of DMK’s historical opposition to policies dictated by Hindi heartland leaders and parties.

Speaking to The Wire, Manu Sundaram of the DMK said that one should not make a big deal about the inauguration of the DMK office in Delhi as the land for the office was allotted to all parties which had more than seven MPs back in 2013, and it was only natural for the office to come up.

However, given the fact that the inauguration ceremony may turn practically into an opposition conclave on Saturday, the optics of the event indicates otherwise. Stalin has been campaigning strongly against the BJP-led Union government on every platform. He has attempted to bring together opposition leaders of various hues.

Recently, he formed the Federation for Social Justice and invited 37 non-BJP leaders to join it and “fight against religious bigotry”. Barring the AIADMK, most other parties, including the Left Parties, Mamata Banerjee-led Trinamool Congress, and Congress accepted the invitation.

Stalin is also said to be working together with Nationalist Congress Party chief Sharad Pawar, who may play a big role in the run-up to the 2024 parliamentary elections.

In another event in which Stalin released his autobiography in Chennai, several opposition leaders like Rahul Gandhi, Omar Abdullah, Pinarayi Vijayan and Tejashwi Yadav participated in what turned out to be yet another opposition meet.

Also read: At Launch of His Autobiography, M.K. Stalin Reaffirms Plan to Fight for Deeper Federalism

Yet, Stalin’s overtures to different opposition leaders can’t be seen as strides to create a third front. Instead, by rallying the opposition against BJP, DMK leaders believe that the chief minister is only strengthening the Congress-led United Progressive Alliance.

“We are firmly with the Congress. We have been fighting the assembly elections with the Congress. Our alliance is strong. We were the first party to accept Rahul Gandhi’s leadership ahead of the 2019 parliamentary polls. We feel he is best placed to lead the Congress currently,” said Sundaram.

It may be wrong to make an equivalence between the likes of Mamata Banerjee and Stalin. While trying to get a national imprint, Banerjee hasn’t hesitated to take on the Congress. Stalin, however, sees only the Congress replacing the BJP at the Centre.