The Dichotomy Between Manusmriti and a Liberal Constitution

The RSS and the BJP have no option but to choose between Manu and Ambedkar. 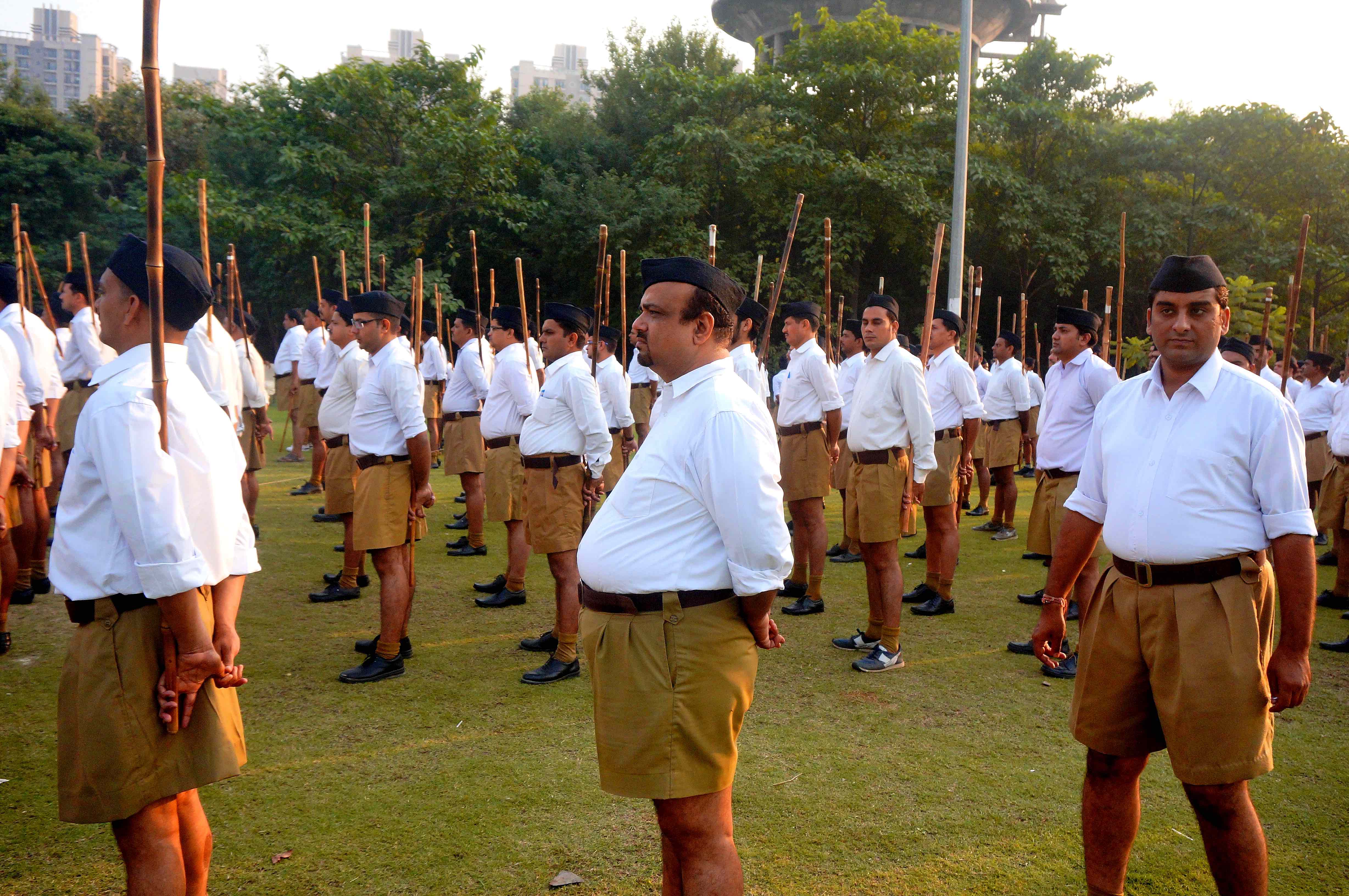 Swayamsevaks of all shapes and sizes, united by their ideology and style of dress. Credit: Shome Basu

The RSS and the BJP cannot solve the paradox of promoting a society based on Manu’s laws, and yet assimilating the principles of equality and liberty enshrined in the constitution. They will have no option but to choose between Manu and Ambedkar. The growth of any organisation – commercial, social or political – depends on the propagation of a central idea or theme that it stands for. For instance, the sales of Fair & Lovely, an Hindustan Unilever product, will depend on how much being of fair complexion matters in the society in which the product is sold. The sales of Fair & Lovely will continue to thrive as long as the market in which it operates puts a premium on fair skin and discriminates on the basis of skin colour.
Similarly the growth of the BJP and RSS needs to be understood on the basis of the ideas that it stands for and propagates. In this context, one has to examine the acts of violence and repression against sections of society based on their eating preference, occupation and sexual preference, which are a result of the ideas that the ruling party (the BJP) and its mother organisation (the RSS) have espoused and propagated for their own growth.
The ideas of the RSS and its offshoots – the BJP, the Vishwa Hindu Parishad, Bajrang Dal and the like – lie in the Manusmriti and in the books written by the RSS ideologue M.S. Golwalkar, in particular, Bunch of Thoughts and We or Our Nationhood Defined.
The worldview of these organisations is diametrically opposite to the democratic, diverse, plural, liberal, equal and secular idea of India. The Indian constitution is a progressive document based on the principles of equality, justice, liberty and fraternity. These are very progressive ideas in a society which has strong feudal impulses and where most of the elite in power still believe in the laws of Manu as given in the Manusmriti.
The belief in the Manusmriti does not allow the RSS to accept India as an inclusive and secular state where every citizen has certain rights irrespective of caste, religion or gender.
The Indian constitution was one of the earliest constitutions to give universal adult suffrage. The idea of universal adult suffrage is antithetical to the ideas of Manu. On November 30, 1949 (four days after the constitution was finalised) the RSS’s Organiser wrote: “But in our Constitution there is no mention of the unique constitutional development in ancient Bharat. To this day Manu’s laws, as enunciated in the Manusmriti, excite the admiration of the world and elicit spontaneous obedience and conformity. But to our constitutional pundits that means nothing”.
The RSS and its ideologues like Vinayak Damodar Savarkar never came to terms with the new constitution because it was not based on Hindu scriptures, in particular the laws of Manu. Savarkar had professed  great affinity for the Manusmriti.
“Manusmriti is that scripture which is most worship-able after Vedas for our Hindu Nation and which from ancient times has become the basis of our culture-customs, thought and practice. This book for centuries has codified the spiritual and divine march of our nation. Even today the rules, which are followed, by crores of Hindus in their lives and practice are based on Manusmriti. Today Manusmriti is Hindu Law,” he wrote.
During the campaign for the 2014 Lok Sabha elections, one key idea was floated by Prime Minister Narendra Modi. Speaking on the birth anniversary of Maharana Pratap, he said everyone knows about the white revolution and green revolution but the dream of the government of India is the ‘pink revolution’. The government of the day wants to kill the Gau Mata to make money. In another speech, he said the Congress would allow the killing of cows if voted to power. These statements by the prime minister have naturally fed into the unchecked growth of cow vigilante groups who have been playing havoc in society. If Modi professes such views, what chance does the administration have to stand up to the unconstitutional method adopted by the cow vigilantes who take the law in their own hands and beat up people for transporting cattle, even though they have all legal documents in place. The nexus of the local BJP and its affiliated organisations, the cow vigilante groups and the police have created a heady cocktail akin to a Hindu Taliban.
The attacks on Dalits and Muslims engaged in leather and cattle trade, and the ban by the BJP-ruled governments on the sale and consumption of beef also need to be looked at from an economic perspective. To me, these are nothing but new forms of economic blockade by the ruling elite to ensure that the Dalits and Muslims are broken financially. The state will soon realise that by trying to break the Dalits and Muslims economically, they have also caused a tremendous damage to the agrarian and diary sectors of the country.
The RSS had laid out a clear roadmap to appropriate the Dalit vote bank for the BJP and to consolidate them under the Hindu identity through its Samajik Samarasta Manch and other social programs like ‘One Well, One Temple and One Crematorium’, but it forgot that in the Varna system, the Dalits cannot be given an equal place. The RSS, or for that matter any organisation, cannot solve the essential paradox of promoting a society based on Manu’s laws and yet  assimilate the principles of equality and liberty as enshrined in the consitution. The RSS and the BJP will have no option but to choose between Manu and Ambedkar. They cannot let go of Manu since that will mean letting go of their soul.

But the RSS and the BJP will soon realise that India’s democratic impulse will turn again to Ambedkar and not to Manu.

Alankar is a political analyst, researcher and a former banker.