In the Diamond Hub of Surat, Patidar Factor, GST May Cost BJP a Seat

The Varachha road constituency which is the centre of Surat's diamond trade has been slipping out of the BJP's hands since the area saw massive violence and arson in 2015. Surat, the economic capital of Gujarat, is known for its diamond and textile industries. In the city, dominated by businessmen, the Bharatiya Janata Party had won all 12 seats in the 2012 elections. However, in this year’s assembly polls, the aftereffects of the Patidar agitation, anger due to the Goods and Services Tax, and unpopularity of some sitting MLAs have become a bane for the BJP in its own fortress.

Out of the 12 constituencies, six – Varachha road, Kamrej, Katargam, Olpad and Udhana – are dominated by Patidars who had migrated from the Saurashtra region in search for jobs.

Dharmik Malviya, the Surat convenor of the Patidar Anamat Andolan Samiti (PAAS), an organisation headed by Hardik Patel, had declared earlier that the PAAS’s target is to defeat the BJP in at least four seats – Varachha road, Katargam, Kamrej and Surat North.

“Even in the seats where there is not much of Patidar ire, the BJP is not strong as last they were in 2012. In Limbayat, people are not happy with the sitting MLA Sangeeta Patil who has been fielded again by the BJP. She is one of those MLAs who has barely done any work in her constituency. Yet she managed to get a ticket because of her closeness with the BJP MP C.R. Patil. The Congress has fielded Ravindra Patil who is also a Marathi. With Marathi votes being split this time, it might get tough for Sangeeta Patil,” says Jaylal Lalwani, a businessman associated with the Aam Admi Party in Surat who was also the spokesperson of the GST Sangharsh Samiti, an organisation floated to protest against the GST regime.

The BJP, sensing the Patidar ire and attempting to impede the anti-incumbency factor, has dropped six of its sitting MLAs from Kamrej, Surat East, Surat North, Karanj, Udhna and Kataram constituencies. Nanu Vanani, Katargam MLA and a minister in the Vijay Rupani government, is amongst those who have been dropped in this election.

However, in Varachha road, which is the centre of the diamond market, the party has fielded its sitting MLA Kishorebhai Kanani, a Leuva Patel from Amreli in the Saurashtra region. The Varachha road constituency was carved out of Surat City North and Surat City West constituencies and is said to be the toughest to win for the BJP this time.

Kishore Kanani, the BJP’s candidate from Varachha road told The Wire, “The Patidars are with Hardik only because of the reservation factor. That will not make them vote against the BJP. With Hardik campaigning for the Congress, it has become easy for us. The Patidars can see now that he has clear political motives. Besides, the reservation promised by the Congress is not viable. Last time, I won by a margin of about 20,000 votes; this time it shall be a margin of 40,000 votes.” 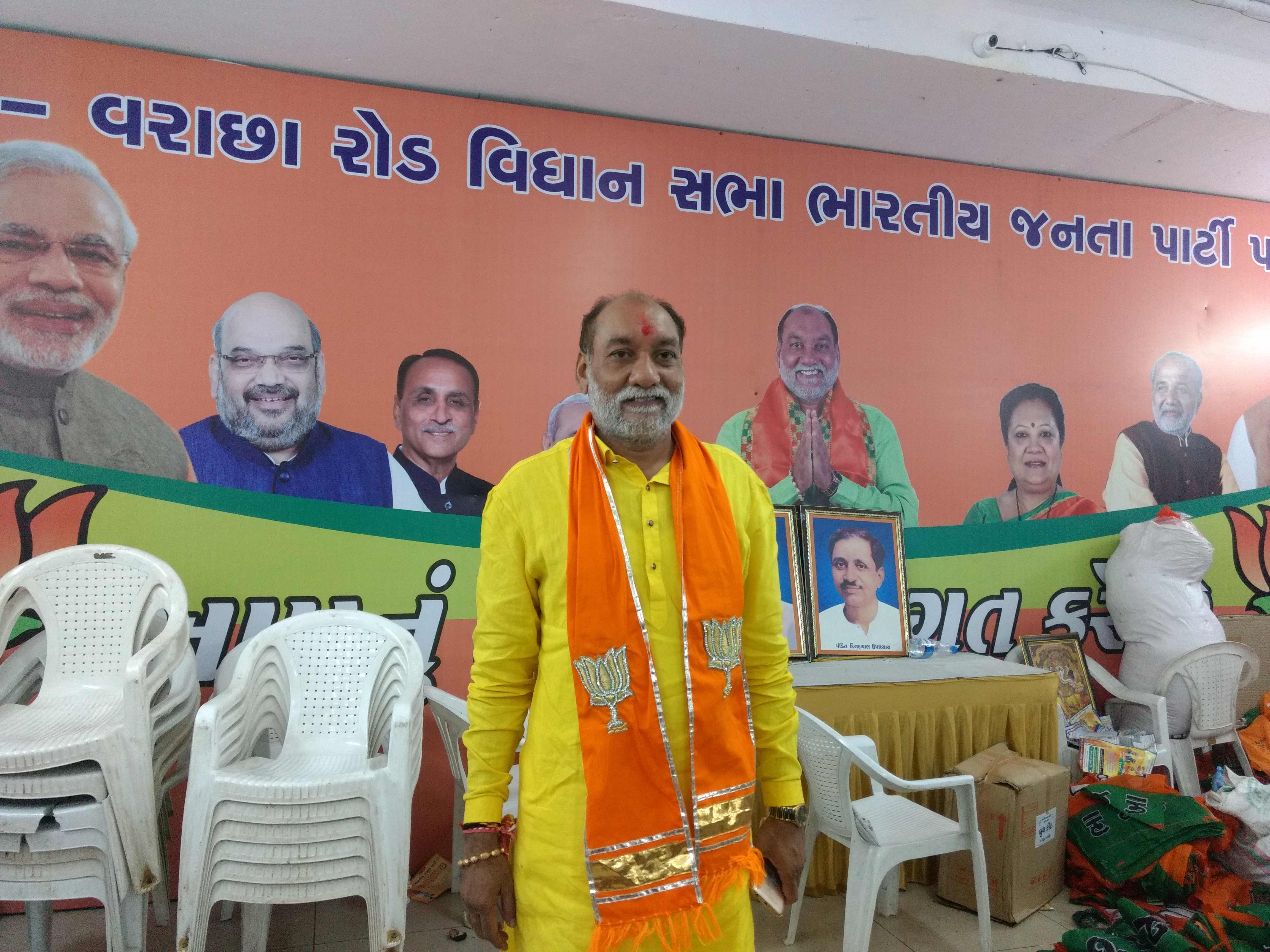 “The Patidar had forgotten the impact of the KHAM (Kshatriya, Harijan, Adivasi and Muslim) theory of Congress and its impact on the community. But this time, the Congress reminded them of it again by playing caste politics. Only this time, it is Hardik, Alpesh Thakor and Jignesh Mevani who are trying to bring in Patidars, Thakors and Dalits into the Congress fold. But that won’t work,” added Kanani.

The Congress has fielded Dhirubhai Gajera from the Varachha road constituency. The party had initially given a ticket to Praful Togadiya, a relative of the Vishwa Hindu Parishad (VHP) leader Pravin Toadiya who has been associated with the Congress for many years. Following his candidature, members of the PAAS protested in Surat which forced the Congress to replace Togadiya with Gajera.

Also read: Congress May Have Put One Constituency at Risk to Try and Win Another in Gujarat’s Rajkot

Gajera and Kanani will face each other for the second time in the Varachha road constituency. In 2012, Kanani who contested assembly elections for the first time had defeated the veteran leader by 20,359 votes.

Both Gajera and Kanani hail from Amreli district of Saurashtra and are Patidars. Gajera’s elder brother, Vasant Gajera, is a trustee of Kodhaldham, a highly revered religious centre for Leuva Patels – a factor that can work in Gajera’s favour in the Leuva Patel-dominated Varachha.

“It doesn’t matter if his brother is a trustee. Kodhaldham trust doesn’t take sides. I am a Patidar too,” Kanani said.

Sixty-four-year-old Gajera started his political career as an active worker of the Jan Sangh in 1971. In 1995, when Gajera contested and won the assembly election from the Surat North constituency, Kanani who had joined the BJP in 1987 had campaigned for Gajera. Gajera won two more terms from the same constituency while he was in the BJP. 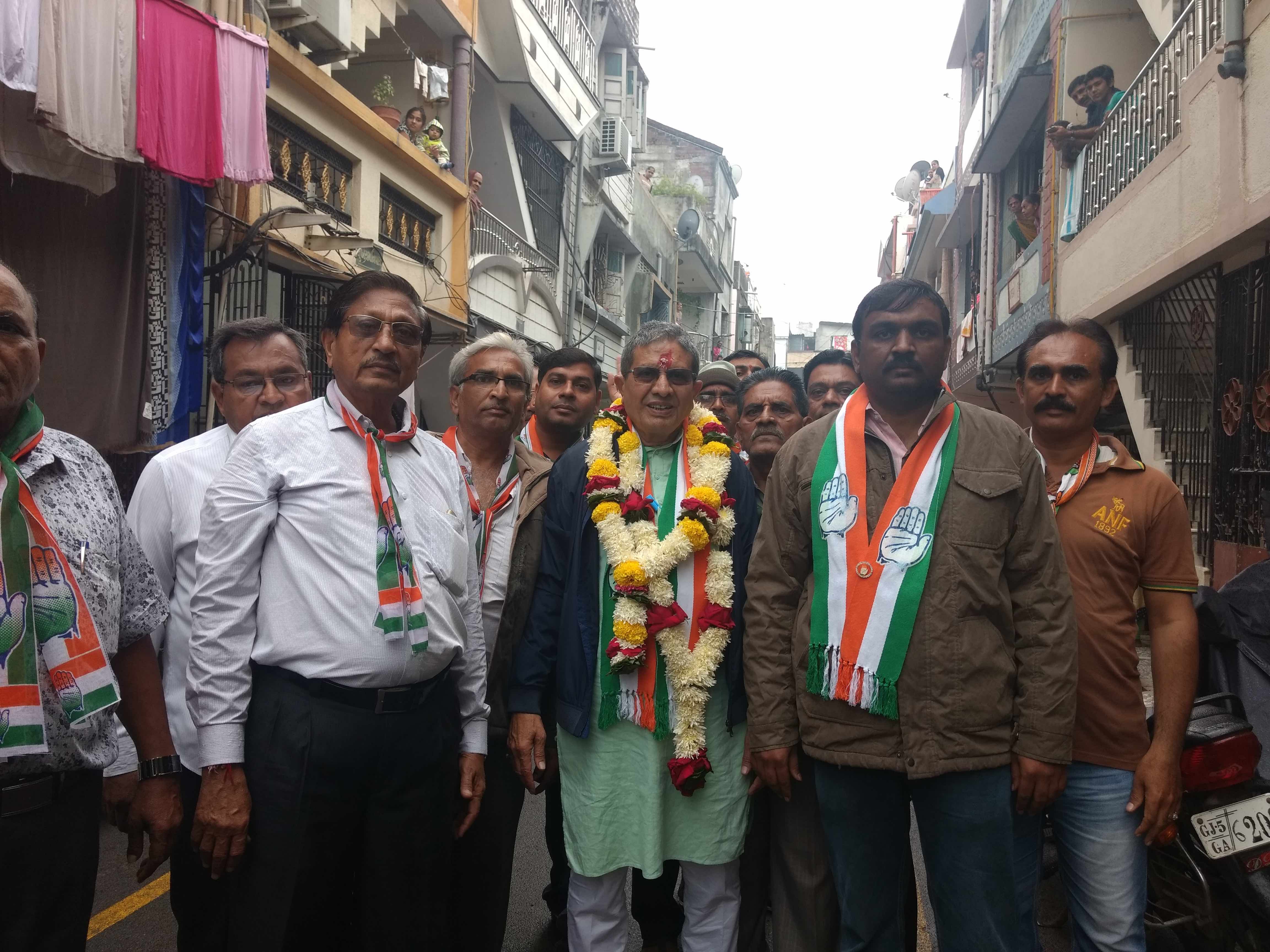 Gajera in a door to door campaign in Varachha on December 6. Credit: Damayantee Dhar

In 2007, the BJP gave the ticket to Nanu Vanani who is believed to be a close aide of Prime Minister Narendra Modi, following which Gajera quit the BJP and joined the Congress in 2007.

“I quit because of my differences with Modi. He has no regard for veteran leaders who are loyal to the party. He wants people loyal to him. He had no plans for the party. All he did was organise functions and religious events,” Gajera said.

“The Congress did not have a strong base in the area. This time, issues like GST and Patidar ire will work in our favour,” Gajera added.

While Gajera has Hardik’s support, the BJP has been facing a hard time campaigning in the constituency. After Kanani’s candidature was declared, Patidar-dominated residential societies had put up posters with the slogan ‘Jai Sardar, Jai Patidar’ and a red-cross mark on the BJP’s lotus symbol with ‘144 imposed’ written.

“Some societies have banned the entry of BJP campaigners. We don’t want them to come and beg for votes. They appear only before elections anyway,” said Mamta Sawani, a resident of Varachha who originally hails from Bhavnagar.

In another society in Gokulnagar, Varachha BJP workers who tried to campaign for Kanani were chased out and their pamphlets were torn by supporters of Hardik. Women threw eggs on BJP workers before they could even enter a society in Varachha.

Varachha has been slipping out of the BJP’s hands since the area saw massive violence and arson in 2015. However, it is not just the supporters of PAAS who are against the BJP. In 2016, Amit Shah’s rally was disrupted as Patidars threw chairs on the stage. K.D. Sheladiya, a  local Patidar leader who has thousands of youth supporters in Surat, led the crowd that time.

Troubled by the increasing resistance in the area, the BJP brought in Purushottam Rupala, minister of state for agriculture who is a Patel from Saurashtra, to campaign in the Varachha constituency.  It was only a year after that the BJP addressed a public meeting in the constituency. 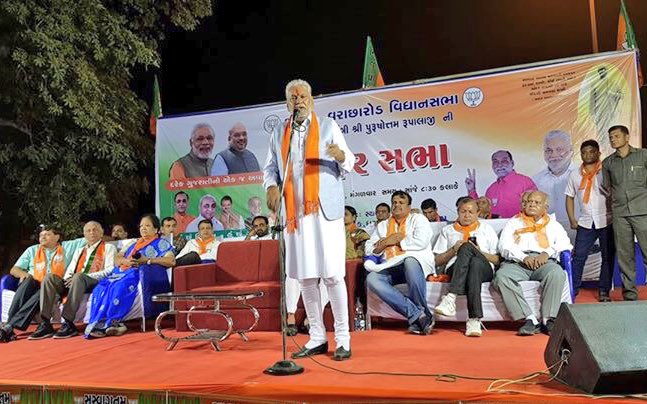 However, local leaders and supporters of the BJP are mostly dependent on Modi to pacify the Patidar voters.

Modi, while addressing a rally in the Kadodara area of Surat in November, invoked Gujarati pride. “Morarji Desai, a leader from Surat was thrown out of the party like a vegetable by Indira Gandhi,” Modi said in the rally.

Modi’s next rally in Surat, scheduled for December 5, had to be cancelled due to cyclone Okchi.

“Modi is a magician. All issues will be solved once he comes to the area. Till Modi is the leader, nobody can replace the BJP. The Patidars say they are angry, but in the end, they will vote for Modi,” said Naresh Kathiriya, a diamond trader of Varachha.

Hardik, however, held his road show in the constituency as Gajera welcomed him with garlands on December 3. The thirty-six-hour road show ended with a massive public gathering addressed by the Patidar leader in Varachha.