People suffered but voting may have been driven less by anger over the damage to immediate economic interests than by their belief that a 'decisive' Modi would make them better off in the long run. 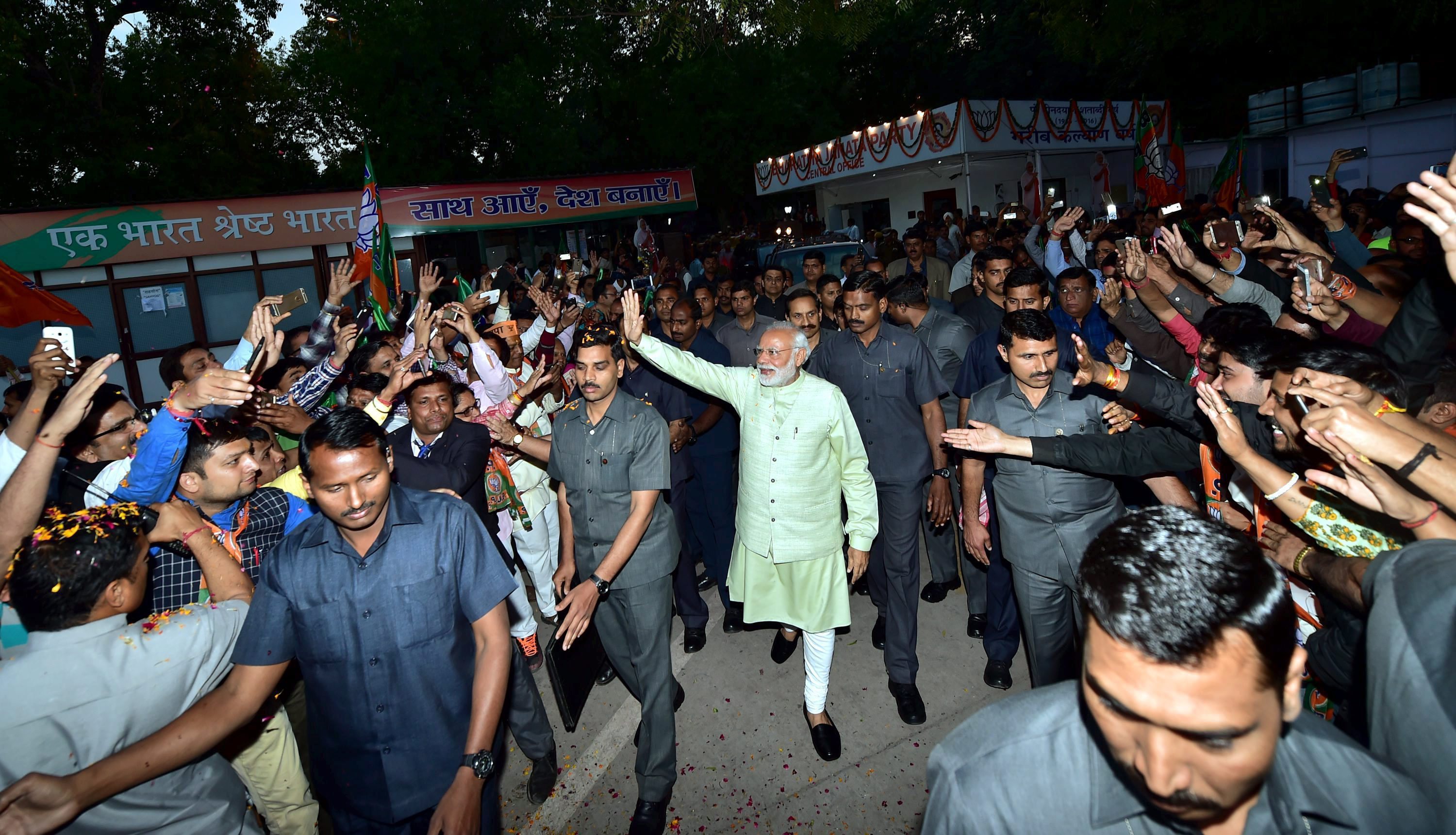 Prime Minister Narendra Modi waves to supporters at the BJP's headquarters as he arrives to its celebrate victory in the UP and other Assembly elections in New Delhi on Sunday. Credit: PTI/ Manvender Vashist

How can one explain the stupendous success of Narendra Modi in leading the Bharatiya Janata Party to a landslide victory within a few months of implementing the policy of demonetisation, which even a recently published RBI report says had negative and disruptive effects, at least in the short-run? It is impossible that a politician as astute as Modi chose the timing of the demonetisation policy without thinking of the upcoming state elections, especially the one in Uttar Pradesh with its high stakes, given the electoral importance of the state on the national stage. As I had suggested earlier, we have to see demonetisation not as an economic policy chosen on standard cost-benefit terms but largely as a political campaign.

Most economists have argued that it is difficult to rationalise the demonetisation policy on economic grounds. The government’s own justification has evolved, ranging from addressing black money, counterfeit currency, terror financing, and corruption by encouraging the increased use of digital payments and thereby facilitating greater formalisation of the economy. Given that the Ministry of Finance’s own 2012 report suggests that  a very small fraction of illegal wealth is stored in the form of cash, its effectiveness as a one-time tax on black money is limited. As much as making gamblers use tokens of different colour in a casino is unlikely to curb cheating, merely changing the currency notes in which people transact will not curb corruption without systemic reforms of bureaucratic, legal, and regulatory frameworks. The argument for promoting a digital economy has more merit, but given that only one-third of the population has access to smart phones or the Internet, surely more direct investments in digital infrastructure would be more effective in promoting digitisation of transactions.

While the gains from this policy are uncertain, unlikely to be high, and in any case, can only be evaluated in the long-run, the costs are not. Other than the physical hardship associated with implementation problems in replacing the notes, such as standing in queues, the largely cash-reliant informal sector was dealt a major liquidity blow. Data on the informal sector tend to be patchy. Still, in an economy where 80% of the workforce is informally employed and 78% of all consumer spending is via cash, it is not surprising that media reports suggest a significant drop in sales and employment in the informal sector. Some of these informal-sector workers returned to their villages, which interestingly shows up in a significant boost in demand for employment under MGNREGA in the months following November.

There is no question that the poor suffered economic hardship, at least in the short-run. Early indications that this may not be politically very costly for Modi came from the fact that in a country used to strikes and rallies over anything perceived to be against the economic interest of ordinary citizens, such as increases in bus fares, there were very few anti-demonetisation protests across the country. As the proverbial dog that did not bark, this should have caused everyone to stop and think, where is the outrage?

Despite its uncertain benefits and immediate toll on voters, demonetisation not only did not have big political costs but in fact may have helped Modi because it had some of the essential features of a good political campaign. It had great signalling value – the intended message was that only a very tough leader who is committed to controlling corruption can undertake a politically risky, disruptive, and potentially costly move like this. As a campaign message, it had universal outreach and perfect targeting, as people were literally pulled by their purse-strings. Even though it was costly for the poor, they are used to day to day hardships, and any grievance they had may have been offset by the satisfaction that everyone, including the rich and the powerful, had to comply, and were in fact more inconvenienced than them, having had more to start with.

The reason why many analysts saw demonetisation as a political handicap and did not anticipate the huge groundswell of support for Modi is that they take a narrow view of voters as being driven by immediate economic self-interest. But voters, like stock market investors, are driven by future expectations and the effectiveness of political campaigns depends on their ability to shape these expectations. Campaigns are about promises, while policies are about actions to deliver on those promises. Yes, in the long run voters are driven by their economic interest, but in the short-run they must rely on their gut-feeling as to which leader, party, and policies will make them better off five years from now. This is where the credibility of the messenger and the narrative she or he provides for a path of change is critical, because all that the voters get is a promise, and the future is uncertain.

A brand that can take on the bad guys

This is exactly as in marketing. A brand needs to establish a market identity that signals trustworthiness and quality to the consumer and appeals to an aspirational lifestyle or self-image. In a soap ad, an image of a happy family vacationing in a picturesque resort tells us nothing about the quality of the soap a company is trying to sell. But if a rival were to try to compete with advertising about the chemical properties of a soap or the endorsement of experts, it is unlikely to get much traction. Just as an advertising campaign about a soap is often about linking the product with a vision about lifestyles or aspirations in the consumer’s mind, a political campaign is about spinning a narrative about what is wrong with the current situation, what is the vision for a better future, and who can be trusted to realise that vision. It hinges on the effectiveness of stories and not of policies.

Modi has created a new narrative of change that touches a chord with an aspirational India impatient with a scenario where they need to rely on the help and benevolence of elites whose credulity has been undermined by corruption scandals, dynastic politics, and charges of favouring some social group or the other. Through his biography and his track record, Modi has successfully cast himself as the hero of this new narrative: a tough, no-nonsense leader who is not afraid to take on anybody, whether it is the corrupt or the “anti-national” or foreign enemies. What his critics see as Modi’s authoritarian tendencies are precisely the traits that ordinary voters consider essential attributes of a tough guy who is trying to reform the system. Demonetisation was the equivalent to an initial scene in an action film where the vigilante hero played by Amitabh Bachchan or Clint Eastwood establishes his tough-guy credentials by doing something spectacular but not particularly relevant to the overall plot, like beating up a random bunch of hooligans. Once that was done, all Modi needed to do in UP was to show up and say, “I’m Narendra Modi, you know I will fight corruption, and demonetisation is just a taste of things to come”.

Indian voters like their movies long, and therefore, the short-term economic record under Modi might be of little relevance to them. However, they do like happy endings. At some point, then, promises and outcomes have to match. The trouble is, outcomes only become visible in the long-run, are affected by many external factors, and cannot be pinned down to specific policies. This can cut both ways – it is always possible for a politician or a party to blame other factors if the outcomes don’t look good, and to claim all the credit when they do. But with a long horizon, as Modi seems all set to have, no amount of good luck can cover the lack of substantive achievements. Moreover, extraneous factors can undermine credit for substantive achievements, as the last two Indian prime ministers, Atal Bihari Vajpayee and Manmohan Singh, both experienced. That is when the public gets hungry for a new narrative and a new credible messenger rises in the horizon. Like Obama did in 2008, Modi in 2014, and Trump in 2016.

Maitreesh Ghatak is professor of economics at the London School of Economics, and earlier taught at the University of Chicago.