Democracy Is Not a Monologue: Rahul Gandhi’s Self-Effacing Critique of Modi

Rahul Gandhi's modest and unpresuming comportment during his interview with NDTV’s Ravish Kumar was in stark contrast to Modi's scripted and "apolitical" conversations.

In the middle of his election rally in Shajapur, Madhya Pradesh, Rahul Gandhi spoke to NDTV’s Hindi news anchor and journalist, Ravish Kumar. In stark contrast to Narendra Modi’s preference for safe interviews in friendly television studios and “apolitical” conversations with film stars held in his residential lawn, the Congress President faced unscripted questions from one of India’s most inspiring journalists, with elan.

Rahul finds it necessary to reemphasise the politics of love, in an atmosphere vitiated by moral vulgarity and hatred. There is nothing “mysterious” about the pamphlet on Atishi – the East Delhi candidate from Aam Aadmi Party. The language of the pamphlet bears proof to three tendencies coming together: one, the audacity of a patriarchal mindset; two, the culture of caricaturing a political opponent; and three, lowering the level of political discourse by introducing vile rumours.

We know which political ideology has been practising these tendencies for the last five years. The pattern is unmistakable. There is a moral vulgarity that is being injected into our political language so that people vote according to their basest instincts. There seems to be accepted wisdom among hyper-nationalists that unless indecent language and methods are used to woo the voters, they won’t vote for them.

Rahul has matched indecent language with his insistence on love. It was brave of Rahul to talk about love at a time when you can smell hatred in the air, sense its viscous poison spreading throughout social media, WhatsApp and other mediums, see and hear it in people who are hypnotised by a man who is encouraging them to sacrifice their brains for paranoia and acrimony.

Rahul affirmed the political spine of the Congress by saying that it was his party that took the “political fight” to the BJP. He backed up this assertion by stating that if Modi had attacked anyone most fiercely, it has been his party, and his predecessors – who also happen to belong to his family.

Earlier in the day, Rahul was quick not to allow the BJP to take much advantage of Sam Pitroda’s crass and demeaning comments on the 1984 anti-Sikh riots. Asking Pitroda to apologise, Rahul said his comment was “absolutely and completely out of line and is not appreciated”.

It is, tactically, not an easy proposition for the BJP to try and remind people in Delhi of 1984 – when Sikhs in Punjab are looking to have a “Modi-Mukt” state. The Sikhs are also not fooled by BJP’s nationalism, coupled with their anti-minorities agenda. There may be no love for the Congress, but there is a clear political assessment of the dangers of a majoritarian regime that may deteriorate historic and pragmatic relations across the border. Hate is not a solution, but a perpetuation, of the tragedies of history. Those who have suffered it know it.

The next interesting thing Rahul said, that drew the attention of his astute interviewer, was his desire to “destroy the self” in politics. To begin with, it is a project of the annihilation of the ego. Rahul passionately explained his desire to obliterate his own “voice” when faced with, or in the presence of, others, and other voices.

Taking the example of the farmer, Rahul tried to explain, that only when he will be able to obliterate, to erase, his own voice in the presence of the farmer, will he be able to listen to the farmer’s “pure agony”. He extended this to mean the worker, the journalist, and anyone he meets, or faces. It is a project of ethical selfhood, where the voice (and presence) of the other takes precedence over the egoistic voice of the self.

There are echoes here of Gandhi, where Gandhi spoke of realising the truth in his experience of “meeting the peasants (at Champaran)” where he came “face to face with God, Ahimsa and Truth.” It is a language less religious and more ethical, when you consider the material ground of its unfolding.

Rahul added an important element of voice in this encounter. You strain to hear something that is higher than you. You elevate yourself to hear it. It is an ethical process of lifting oneself from the deaf room of the narcissist ego that only knows how to hear itself, and lean towards the other voice, the contrarian voice who speaks something else, not always to your advantage, or for your pleasure, but something more demanding.

Also read: Backstory: Five Years of the Silence of the Lambs

Rahul showed admirable keenness to get closer to the feelings and thoughts of his interlocutor. The interpretation of Rahul’s language does not assume that a politician necessarily lives by his principles.

The political connection between speech and actions is a spurious and contentious one, marked by the vagaries of time and the limits posed by instrumentality. But nevertheless, the interpretation is necessary to elucidate, and bring to notice, in a country where in the last five years political language has reached its nadir.

There is nothing particularly inspiring in the discourse of mainstream Indian politics today. Barring marginal voices like Jignesh Mewani and Kanhaiya Kumar. In such a scenario, it is heartening to hear Rahul being anxious to recover the ethical language that had fled from Indian politics. 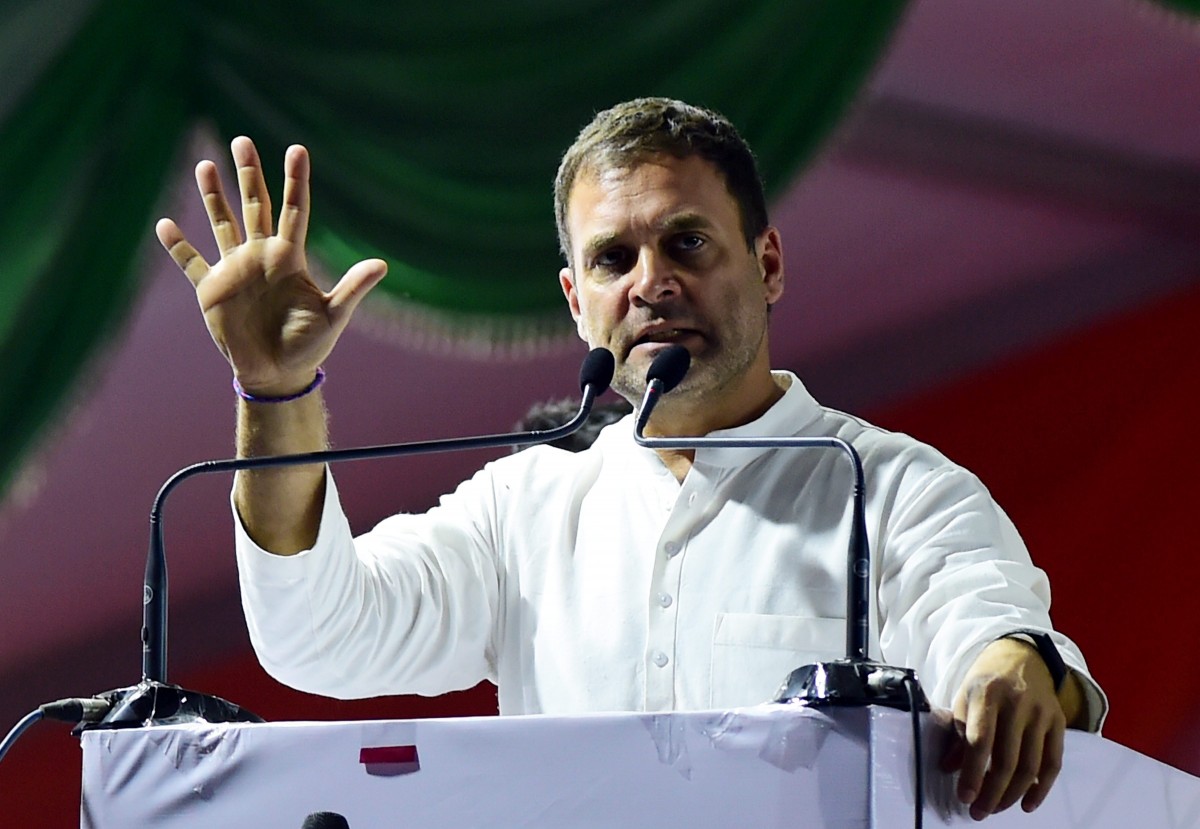 Rahul’s open interviews to the press propelled Modi into giving his first ever proper political interview, after becoming the PM, to the Indian Express today. In contrast to Rahul’s desire to improve the democratic discourse, Modi’s attitude smacked of arrogance. He lectured his interviewers on stories the newspaper had failed to “follow-up” on. He took another jibe at the newspaper for bringing up the INS Viraat issue (about the BJP paying huge amounts for Modi’s “non-official domestic trips”).

The prime minister appeared anxious about how his “image” was represented in newspapers like the Indian Express. In Modi’s understanding, anything that is written in disfavour amounts to bias, rather than a legitimate expression of press freedom. A newspaper’s prerogative is the protection of truth, not the protection of a politician’s self-image.

Upon being asked how he compares himself to Modi’s claim of sleeping only three hours and working for eighteen hours a day, Rahul connected it to his earlier point to make a larger assertion. He asked what the meaning of “work” was for a political leader – and explained that it meant to listen to people’s “voices”, and to “think” about what people are saying. He challenged Modi to a debate on people’s issues.

What Rahul meant to emphasise here was the important point that a leader’s political commitment is not to be measured by his hours of sleep, but his hours of engagement. From that yardstick, he found Modi wanting.

Rahul defined work in politics as something not limited to orations alone. In a democracy, political work does not entail merely delivering speeches and indulging in the passing of comments. This amounts to a mere monologue. The point is well taken.

Monologue is the style of autocrats. A leader who does not listen to his people does not believe in democracy. Listening to people’s voices enables the functioning of democracy – where the will of the people is heard by the leader who represents them (in Parliament). In a representative democracy, power ideally lies between the leader and the people.

The primary responsibility of a leader is to act on behalf of the people’s demands and wishes. Currently, in India, the people are being asked to act upon the demands and wishes of the prime minister. This is a dangerous overturning of the very idea of democracy.

Apart from showing a sincere commitment towards listening to people, Rahul confirmed his commitment to the politics of love, saying he has respect and love for Mayawati. This amicable language – completely missing from Indian politics today – is a welcome gesture. He called Mayawati a “national icon”. This space for mutual respect for political opponents is a good sign. It reinforces a leader’s democratic credentials, as opposed to the language of vitriol that leaders of the Hindu right constantly use against the opposition.

It is interesting to note that in his interview, Modi declared nonpolitical measures like “cleanliness” and “healthcare” as legacies of his government. Demonetisation came up only in response to a separate question. When asked about the marginalisation of Muslims, Modi repeated the names of the late APJ Abdul Kalam and Sania Mirza, as symbols of empowerment.

The interviewers did not ask him about Mohammad Akhlaq and Pehlu Khan. The name of the 1965 martyr, Abdul Hamid, as a textbook Muslim hero of Indian patriotism is circulated to obfuscate the plight of ordinary Muslims who are lynched by cow-vigilante groups, and love-jihad gangs.

Wonder what form of violence, in contrast, was committed by the “Khan Market gang” to earn Modi’s ire. If Modi has “zero tolerance” for Naxalism, why does it balloon to infinite tolerance when it comes to organised attacks by proponents of Hindu nationalism on minorities and critics?

Also read: As a One-Man Show, Narendra Modi Will Find It Challenging to Run a Coalition Govt

“It is my belief”, Modi said in the interview, “that criticism must happen, not allegations.” The question is: who determines the distinction? Allegations are a part of criticism. In a democracy, the merit of criticism is decided by the people, the press and the opposition, on their own terms. It is not decided by the party in power.

Modi’s discomfort with criticism is in contrast to Rahul’s light shouldered response to ridicule. That he admitted to having “learnt” from the personal ridicule he faced as an upcoming leader, corroborates his claim of being a man who seeks self-effacement in politics.

This remarkable comment, that visibly stunned his interviewer, has a crucial lesson for our times. India is facing a deep attack on its cultural psyche, where a new norm is being enforced: of ridiculing, abusing all those who do not accept the brand of hate-mongering nationalism. It will need some degree of composure to distance oneself from the daily dose of abuse and keep to the political task at hand. Rahul may have a thing to teach us there.