Having Scripted a Drama About the Delhi Violence, the Police is Now Casting for Characters

They are mostly young, students, women and Muslims. 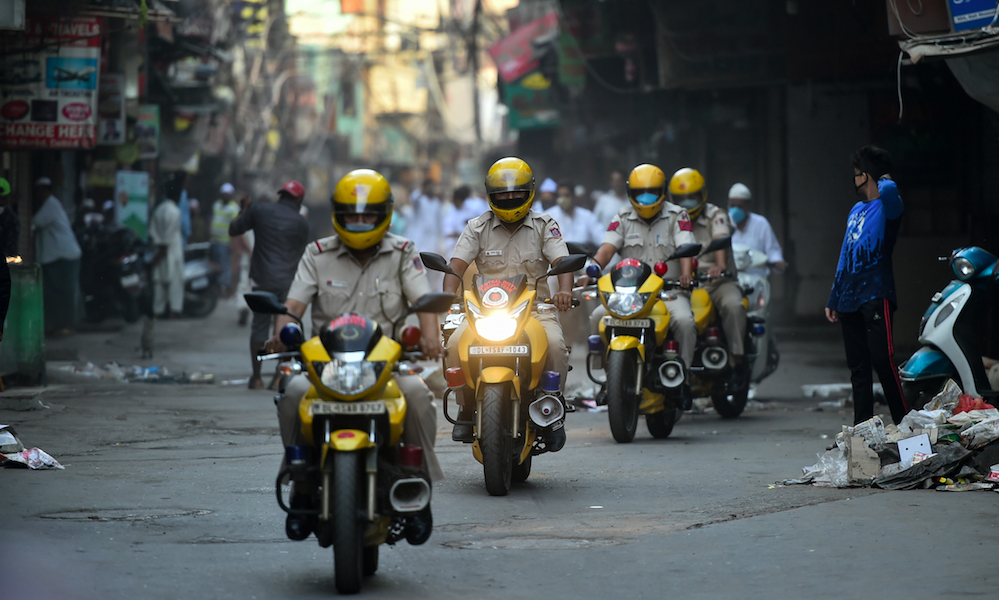 A conspiracy is being hatched in Delhi: to create the story of a conspiracy. The fiction the Delhi Police would like us to believe is that there was a conspiracy behind the violence in the northeast part of Delhi in the last days of February – a conspiracy involving those who, in any manner, had participated in the protests against the Citizenship (Amendment) Act.

Some of those have already been locked up and we are told more arrests are in offing. Young students, mostly women, and Muslim activists have been put in jail. They are facing grave charges – from rioting and attempt to murder to murder itself. The draconian Unlawful Activities (Prevention) Act, or UAPA, has been slapped on some.

The theory of the investigative agencies is that it is they who had conspired to unleash violence in north-east Delhi. And that the anti-CAA protests were nothing but a cover for this conspiracy.

The plot of the story was given to the police by its political masters. In parliament, a statement was made ruling party MPs that there were organisations like “United Against Hate” and persons like Umar Khalid who were responsible for provoking violence. A clip of a speech by Harsh Mander was used to allege that he had called for violence.

The investigative agencies have developed this plot into a story, found characters to the scripted role and are trying to persuade the courts and public at large about its truthfulness. But even in these times, a sessions court retained the ability to see the plot and admonished the police that its probe was being done in a one-sided manner.

The conspiracy theory of the investigation reminds one of the way the Bhima Koregaon violence investigation proceeded. It completely erased from public memory the actual act of violence, which hit the Dalit participants at the event. Those accused of that violence are freely roaming around. On the other hand, human rights activists and social and political activists have been arrested who had nothing to do with the event. The investigative agency claims that it is they who hatched a conspiracy, which caused the violence. So, the whole incident has been turned on its head. The actual act of violence has been forgotten and a narrative of a sinister plot of violence – even an alleged plan to assassinate the prime minister involving intellectuals – is being peddled. The agency knows well what it is doing.

The same template is being used in the case of the Delhi violence. Nearly 60 people were killed, many more injured, scores of houses and business establishments burnt, gutted, destroyed and many mosques damaged badly, desecrated in the February violence. Hindus also suffered, but it was clear that the violence had a distinct anti-Muslim tone to it.

Journalists and observers from India and abroad noted that not a single temple was touched while mosques were targeted viciously. A young friend said that it shows starkly that Muslimness was being targeted as mosques and the copies of the Quran that were burnt are part of the affective selves of Muslims. So, while in the initial hours Hindus and Muslims both suffered in attack and counter attack, very soon it was clear the violence was being targeted at Muslim lives, livelihoods, properties and symbols.

The participation of the police in many instances and its partisan behaviour against Muslims has also been noted. The injured Muslims were either denied medical assistance in many cases or were deliberately prevented from availing it . Only a midnight knock at the Delhi High Court and its order could persuade the police to let ambulances carry the injured from the places where violence had taken place.

Another aspect of the violence was the attack and destruction of the protest sites, which had held on for nearly two months since December, inspired by the now famous Shaheen Bagh sit-in by Muslim women. One of the most popular slogans at these protests had the word or aspiration of ‘Azadi’ in it. During the attacks on them, Muslims, including women, were told, ‘You wanted Azadi, now we are giving it to you’. Policemen were filmed saying this to some young men they were beating. All of this is part of the public record.

Before the physical act of violence, the ground was prepared by provocative remarks directed against the anti-CAA protests. The Prime Minister wanted people to identify the protesters from the clothes they wore. The protests were described by him as an “experiment”, giving an ominous ring to it, and the people of Delhi were exhorted to administer a strong shock to the Shaheen Bagh protesters. One Central minister urged his followers in Delhi to shout that the “traitors” be shot. A senior MP of the ruling party tried to scare Hindus by claiming that rapists and terrorists were hiding in the protests against the CAA.

We can say that there was a psychological preparation for violence against those protesting the new citizenship Act. The fact that the protesters were mainly Muslims made this task easy. Over the years, the Hindutva organisations have pushed the idea among ordinary Hindus that while individual Muslims may be ‘good’, a collective of Muslims is necessarily dangerous.

That a two-month-long protest at more than 20 places in Delhi, involving hundreds and thousands of women, could be done without causing any hindrance to the daily life of the city had taken people by surprise. For the first time in independent India, the preamble to the constitution became the symbol of resistance by the people, for the first time the Indian tricolour became the flag of the protestors. The protests had a lyrical power, they were inviting in nature and rooted in the community. There was some chaos, some lack of planning about them but they were mostly cheerful.

The fact that young Muslim women took the lead also made it very unique. True, mostly Muslims were part of it but they wanted others to understand their angst and join the movement.

All this while, a whisper campaign against the protests was also going on, terming them as anti-Indian and anti-Hindu. The skeptics wondered why the Muslims are against giving citizenship to persecuted  Hindus from neighbouring Islamic countries. It was a gross misrepresentation of the demand of the anti-CAA protests but a section of the bug media pushed this distortion through its consistent propaganda.

The opposition parties had not been able to stop the enactment of the CAA. It was the people who rose in protest, following parliament’s failure. They were immediately cut down by the BJP government in Uttar Pradesh and the police in Delhi. Nearly 20 people were killed in UP. What made it even more worse was that the police refused to take responsibility for the killings, implying that the protesters themselves were to be held accountable for their deaths. The police viciously attacked protesting students of Jamia Millia Islamia and Aligarh Muslim University.

Also read: Read: What Senior Lawyers Told the Supreme Court Before it Spoke on Migrants

The Supreme Court made it clear that it did not intend to intervene and stop the state violence. Worse was its observation that it would hear the victims only if they leave the streets. The government was quick to take a cue to delegitimise the protests. Also, an understanding was created that people had no right to protest against something which parliament had approved. If you are protesting against the government, you are essentially against the people who have brought it to  power. The government claimed that it alone represented the people’s will. At this juncture emerged Shaheen Bagh. Muslim women occupied a section of a road and started a sit in. It was largely organic and women led. Young Muslim women handled the logistics. They managed the stage. Very soon, Shaheen Bagh turned into a model. It spread to other parts of Delhi and throughout India, finding an echo even in small qasbas and villages.

The state did not know how to deal with this movement, so a conspiracy theory was floated. That women were a cover for “dangerous” Muslim men. That behind them all were Maoists, Marxists or a fictitious ‘urban Naxal’ group.

This whisper campaign got an opportunity to be articulated openly taking the cover of the election campaign in Delhi. The BJP tried to corner Delhi chief minister and AAP leader Arvind Kejriwal by alleging that he was behind the protests.

Not that there was no solidarity. Different organisations working for women’s rights, Dalit rights and human rights joined these protests. Their participation was again touted as a sinister nexus between the urban Naxals and the “jihadi” Muslims.

Slowly, a call for violence against the protesters was also pushed. A strange slogan was heard, “Modiji lattha bajao, hum tumhaare saath hain” (Modiji, swing your lathi, we are with you).

Later we heard, “Dilli police latth bajao, hum tumhaare saath hain”. Street power merged with the might of the state against the Muslim protesters.

It is against this background that violence was unleashed in northeast Delhi. This violence needs a proper investigation. We need to understand the link between the discourse of violence that was deliberately introduced by those opposed to the anti-CAA protests and the actual acts of violence which followed.

But the investigative agencies are taking the probe in a reverse direction by arresting students and youth, mostly women, and falsely presenting them as characters in a drama that the police has been asked to script.