Mega Opposition Rally in Delhi: Who Said What?

There was an outpouring of criticism for the Narendra Modi government for "destroying Indian democracy and the constitution".

New Delhi: With Delhi chief minister and AAP leader Arvind Kejriwal playing host, the rally at Jantar Mantar turned into a mega show of opposition unity as senior leaders from over a dozen parties turned up.

There were many calls for the ouster of Prime Minister Narendra Modi, as well as a clarion call for a united opposition. In fiery speeches, West Bengal chief minister Mamata Banerjee told crowds of supporters that the “current situation is worse than the Emergency”, while Andhra Pradesh chief minister N. Chandrababu Naidu said that he hoped that Modi would become “ex-prime sinister soon”.

Here’s a roundup of what opposition leaders had to say:

“Modi unleashed 40 CBI officials on the Kolkata police commissioner recently. It was not only an attack on Bengal but also the people of Bengal who had elected Mamataji’s government. It is not happening only in Delhi.”

“People of Delhi were similarly attacked when Modiji hijacked the Anti-Corruption Branch from us. Do you remember how corruption stopped completely when we came to power for 49 days initially? I want to ask Modiji whether he is the PM of Pakistan or India? Why was he attacking the people of India’s capital?”

“It is a coincidence that our dharna is happening on the last day of Parliament. But I want to remind people that Modiji has destroyed the federal structure that Baba Saheb Ambedkar’s gave us.”

While speaking about the Rafale deal, Kejriwal also took a dig at Modi’s degree row, he said, “I request all of you to vote for an educated PM, not a 12th pass person. A 12th pass person does not know which documents he should sign on and where he shouldn’t. This is a fight to save the country.” 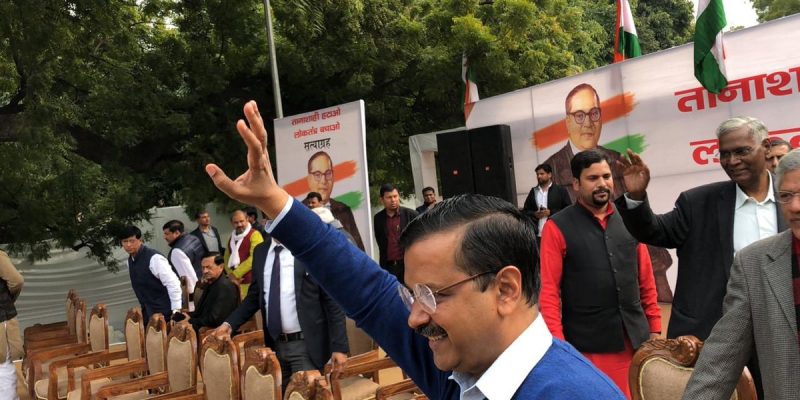 Arvind Kejriwal at the opposition rally at Jantar Mantar in New Delhi on February 13, 2019. Credit: Twitter/@SitaramYechury

“We are going to defeat the NDA government now. Narendra Modi will be ex-PM very soon  Never in the past has the economy been in such doldrums. Only for UP assembly elections, they destroyed the Indian economy. Demonetisation has created such a havoc that people are still struggling. Modi and Shah are responsible for this.”

“Where is cooperative federalism the PM spoke about. He is harassing Kejriwalji. He made so many false allegations against Mamataji. They are attacking me. The PM doesn’t know minimum fundamentals of governance. He is not following the dharma.”

He supported AAP’s demand for full statehood for Delhi. “Kejriwal is giving very good governance with limited power. With full powers, imagine what he can do.”

“All of us can say which university we went to. But Modi cannot say where he was educated,” the Andhra Pradesh CM said about the Modi’s degree.

“Today was the last day for the Narendra Modi government in the parliament. Its expiry date is over. They have only 20 days to do what they want. They will try to scare us. But I must say, jo darte hai, woh marte hai, jo ladte hai, woh jeet tey hai (those who fear will die, those who will fight will win).”

“Let them do what they want to do. What can they do. They will unleash the agencies on us. Let us see how many prisons you have to fill us.”

“They do not even have respect for Gandhiji. He (Modi) thinks only he is a sage and all of us are criminals. Modi is like a dark eclipse on our country.”

“One should ask how much money is spent on one Modi’s meeting. Look at the BJP’s central office – it is like a shopping mall.”

West Bengal CM @MamataOfficial who stood firm and faught against the tyranny of the Modi Sarkar receives a huge cheer from the massive crowd at #JantarMantar #SaveIndianDemocracy pic.twitter.com/iNBNZqp4fG

“Modi does not trust anyone, he has placed all opposition leaders, bureaucrats, and even his own ministers on surveillance. I have seen many governments. No one is as lowly as this one.”

“I urge everyone, jo jidhar strong hai, woh wahan  (BJP se) ladaai karenge. (Whoever is the strongest should lead the opposition in fighting the BJP). I ask people of Delhi to ensure that AAP wins all the seven seats of Delhi.”

“Modi only knows to scare people. I want to tell him that kafan hamare liye intezaar karta hai hum kafan ke liye nahin. Yeh hamara zindagi ka sangharsh hai. (I do not wait for shroud, shrouds wait for me. This is my life’s struggle.)

“Modi is only looking for photobaazi (photo opportunities). He wears Nehru coats and sells it as Modi coats. He has changed history. This period is worse than Emergency).”

“I appeal to all NRI voters to cross check what is happening at the grassroots and discourage people to vote against him.”

“Aaj is desh mein gay surakshit hai, magar kisaan nahin (In today’s India, cows are safe, but farmers are not).” “Asaan nahin hai  inko harana. Humein bhool jaana hai apne aap ko aur ek saath kaam karna Hoga. Is desh ko agar bachana hai, toh humein ek joot hona hoga, apne beech ke bair ko bhoolana Hoga (It won’t be easy to defeat them. We have to forget ourselves, our ambitions, and we need to work together. If we want to save the country, then we will have to stay together as a flock, we have to forget our mutual differences).”

“Humein apne aap ko desh ke liye kurbaan karna hai, kursi ke liye nahin (We have to sacrifice ourselves for the country, not for the prime ministerial chair).”

“The opposition parties have come together to save this country from the fascist rule that is in India,” Kanimozhi said, adding that the government did not allow the common man and woman to live with dignity. “This government has to go if our economy is to be protected. There is no freedom of expression. The deprived sections cannot speak their minds. Even the students are under threat. Such is the government’s divisive policy.”

“Modi has taught the Indian people how a government can betray the mandate. Never ever a government has tried to influence the justice systems of India. I am happy that India has strong judiciary that they protested. The CBI director was dismissed after midnight, this is what Modi government has taught us.”

“My fight is to save this country and constitution. My political training came from Nanaji Deshmukh, Jai Prakash Narayan, Atalji (Bihari Vajpayee), and (L.K.) Advaniji.