The undercurrents of discontent suggest that the people of India – especially the ones in NCR – cannot be second-guessed.

I have spoken to more people in the last few days than I probably have in the last few months. Every morning, nowadays, I board the Delhi Metro and head off to a different part of the National Capital Region where I talk to as many people as I can about the upcoming Lok Sabha elections. I ask everyone the same set of 5 questions:

The idea for carrying out my own pre-poll survey, came to me after I realised that, despite all the ‘expert opinions’ flying around on television channels, news websites and social media, no one actually had a clue as to what the outcome of the elections will be and who will form the new government in May 2019.

So I decided, that as limited in scale and scope this survey might be, at least it would put me in direct contact with people who are not shouting to make themselves heard, people who have probably never set foot in a studio or faced a TV camera, and who live more in the actual world than the virtual one. I hope to speak to as many people as I can in each of Delhi’s seven Lok Sabha constituencies over the next few weeks.

The conversations I have had, have been fascinating, and the answers I have received to my five questions have shown me that the people of India – the ones in NCR at any rate – cannot be second-guessed.

I began my conversations in Chandni Chowk, after having a jalebi and samosa from an “old famous” shop run by a young bald man with a striking resemblance to Vin Diesel. I asked him if he has ever been told he looks like the famous Hollywood actor. He says, ‘No, but people have compared me to Yogi Adityanath.” Then after a pause, he says, “Diesel is expensive. You can call me Vin CNG.” I burst out laughing. The samosa and jalebi are delicious and I begin my conversations/surveys for the day.

I make it a point to tell people right off the bat, that I am not from any political party and that I just want to know who they will vote for. Most people share their thoughts freely. One or two tell me they would rather not talk about it. And one or two tell me, “I’ll vote for whoever you tell me to vote for.”

After several conversations with several shop owners (jewellers, hardware store owners, grocery store owners), I sit down by the side of a very narrow street in Dariba Kalan and tally up the totals. Only about half the people I have spoken to, have said they will vote for the BJP. The other half say they will vote for AAP or the Congress. A few tell me they still need to think about it, or that they will do what their families do. 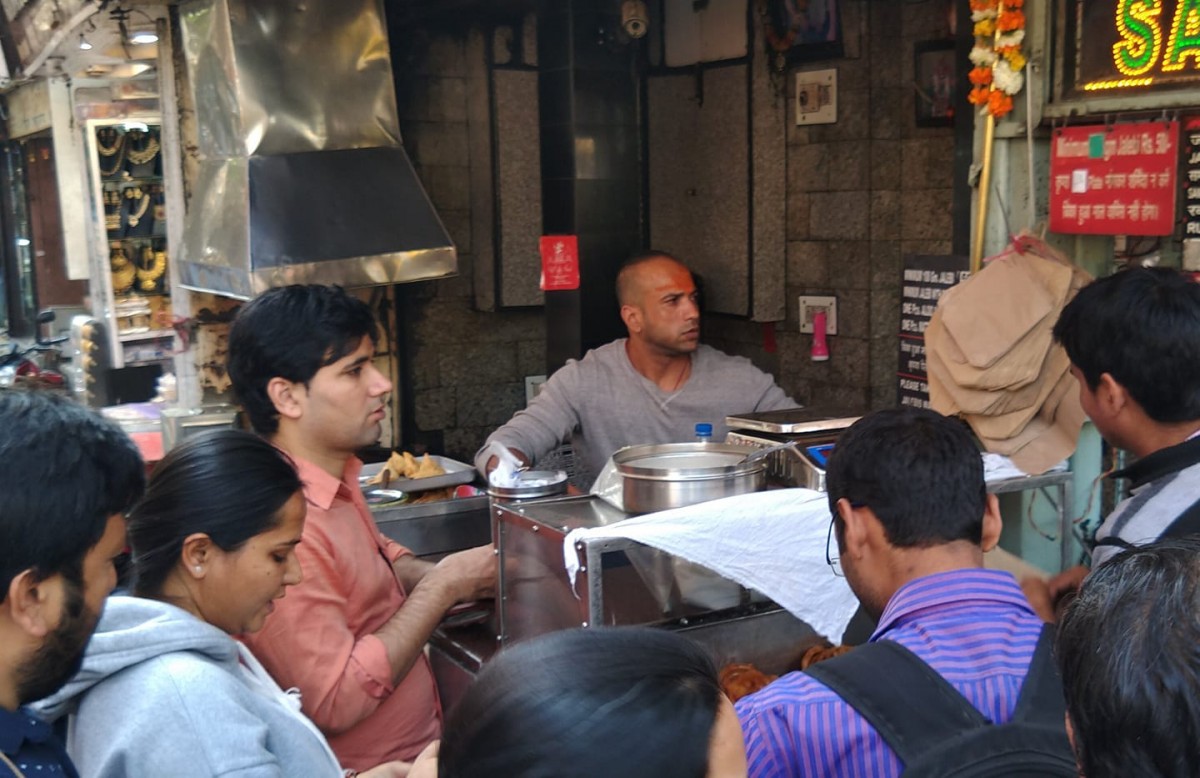 I ask an elderly person running a makeshift cold drink stand for a drink. He hands me one and asks, “Doing a survey?” We get into a deep conversation right away and before I know it, a full forty-five minutes have passed. Sharma Ji has told me in detail about how demonetisation and GST have burdened most people’s business, and how he barely managed to make ends meet during the nightmare days after the demise of the 500 and 1000 rupee notes was announced. He then says, “Not too many will tell you this openly but people are fed up. They want the Congress back.”

Sharma Ji sighs. ‘Yes, we like AAP. They have done a lot of good work and we respect Sisodia and Kejriwal. But they are not a national party.”

I think back about all the BJP supporters I have talked to during the course of the day. When I asked them why they wanted to vote for Modi, most of them listed the usual reasons: ‘strong leader’, ‘taught Pakistan a lesson’, ‘increased India’s prestige on the world stage’, etc. But when I asked them, “So have Modi’s promised achhe din arrived?” Barring one or two truly dedicated fans, all of them said no.

The BJP supporters, I recalled, looked away for a bit when I asked them why they support Modi, almost as if they’re trying to find a good enough reason themselves. I remember one jeweller saying, “We have lived through the reign of Indira Gandhi, Rajiv Gandhi and Atal Ji, but we have ever seen remember this kind of keechad (mud) being thrown. I blame the TV channels for this. Not only do they not tell us the truth but they use the worst kind of language.”

For These Delhi Girls, School Means Rowing Across the Yamuna

I also noticed how many of the shopkeepers I spoke to during the course of the day, almost ended up having a conversation of sorts with themselves. It was fascinating to watch several Modi supporters declare their allegiance to the BJP and then watch their support falter a bit when I ask them if achhe din have arrived, only to have them come out again in support of Modi again, but this time with far less enthusiasm.

I thought about all the roadside vendors and rickshaw pullers I had spoken to during the course of the day. Not a single one of them said they would vote for the BJP. The rickshaw driver who dropped me to the Lal Qila Metro Station says, “This time, I’m voting for someone else.”

I probe. “By ‘someone else’, you mean someone other than…”

He does not finish the sentence, so I finish my own sentence, “…Modi?”

A bus blares its horn impatiently at us. He puts the 50 rupees I have just given him into his pocket, gives me a long look, nods almost imperceptibly, and pedals off.