The ruling AAP, under Arvind Kejriwal, is seeking to keep the BJP and the Congress from power.

New Delhi: The elections to the legislative assembly of Delhi, to be held on February 8, with the results to be announced three days later, will again feature a three-cornered contest. The ruling Aam Aadmi Party (AAP), under chief minister Arvind Kejriwal, is seeking to keep the Bharatiya Janata Party (BJP) and the Congress from power. While the BJP has ruled Delhi once before, from 1993 to 1998, the Congress was in power for three terms, from 1998 to 2013.  For AAP, this would be the third time it will seek to form the government in Delhi.

Though the Delhi legislative assembly was first constituted in 1952, when it had a council of ministers headed by the first chief minister Chaudhary Brahm Prakash, it initially only played an advisory role to the Chief Commissioner of Delhi.

This assembly was subsequently disbanded when, following an amendment of the States Reorganisation Act, 1956, Delhi was made a Union Territory. The Delhi legislative assembly and the council of ministers were subsequently abolished.

Assembly was constituted with 70 members in 1993

The council was replaced by the Delhi legislative assembly through the Constitution (Sixty-ninth) Amendment Act, 1991 and the Government of the National Capital Territory of Delhi Act, 1991.

The first election to this newly constituted assembly, which was to have 70 elected members, headed by a chief minister, was held in 1993.

In these elections, the BJP led by popular Delhi leader Madan Lal Khurana, won a comfortable majority by winning 49 seats. It also secured almost half (47.82%) of all votes polled. The Congress won 14 seats and secured 34.48% of the votes. The Janata Dal won four seats on the back of a 12.65% vote share.

While Khurana became the chief minister, when his name, along with BJP senior leader L.K. Advani’s, cropped up in the Jain hawala diary case, he resigned from the post in 1996. The party then handed the reins to the then-Delhi education minister and Jat leader Sahib Singh Verma, who held the post even after Khurana was exonerated from the allegations. However, in the wake of an unprecedented onion price rise ahead of the 1998 polls, the party replaced Verma with Sushma Swaraj as chief minister.

In the 1998 elections, a deeply divided and disillusioned BJP proved no match to the Congress, even though it had come to power in the Centre by then.

The Congress won 52 seats in the 70-member assembly with 47.76% of the votes. The BJP not only saw its seats drop sharply to just 15, it also saw its vote share erode to 34.02%. Instead of its known faces, the Congress chose to go with the suave and experienced Sheila Dikshit, the daughter-in-law of former Uttar Pradesh chief minister Uma Shankar Dixit, who was also a former Union minister in Rajiv Gandhi’s cabinet.

Dikshit led the party well and in her first term, she focussed on infrastructural development through construction of flyovers, new bus shelters and converted Delhi’s entire public road transport to CNG mode. She also oversaw the privatisation of electricity services. With the Delhi Metro also becoming operational during this period, she retained people’s support going into the next elections. In the 2003 assembly polls, the Congress again returned to power, albeit with a slightly reduced tally of 47 seats. However, its vote share grew to 48.13%.

The BJP had no leader to take on Dikshit and thus ended a distant second with 20 seats. As the Atal Bihari Vajpayee-led BJP government at the Centre also lost in 2004, the party got further demoralised in Delhi. Without an organised opposition, Dikshit went confidently into another election.

In 2008, BJP damaged own prospects

In 2008, some felt that the BJP, under leader of opposition (LoP) Harsh Vardhan, could topple the Dikshit-led Congress. However, the saffron party put paid to those hopes by bringing in Vijay Kumar Malhotra as the CM face just before the polls.

The result was a loss of interest in the polls among many BJP leaders and another clear victory for the Congress and a bungalow for Malhotra in Lutyens’ Delhi, as he now got the post of LoP in the Delhi assembly.

The warning signs for the Congress were there to be seen.

Arrogance began creeping into the Congress as the party entered its third term. The 2010 Commonwealth Games required a lot of expenditure on infrastructure development and allegations of corruption flew, supported by massive expenses shown on various items of purchase by the organising body.

The popularity of the Dikshit government took a hit.

Around this time, the India Against Corruption campaign led by social reformer Anna Hazare – centred around the demand for a Lokpal or ombudsman – caught the fancy of the people. Though the campaign was led by civil society, many believed that it was also supported by the BJP and the Rashtriya Swayamsewak Sangh (RSS). The movement portrayed the then-Congress government in a poor light and led to the creation of AAP, as Arvind Kejriwal broke ranks and decided to float a political outfit.

AAP entered the political arena during the 2013 Delhi assembly elections and immediately made deep inroads, dislodging the Congress from the pedestal. Though the BJP emerged as the single largest party with 31 seats and 33.07% vote share, AAP was close behind with 28 seats and 29.49% vote share.

The Congress lost badly, winning just eight seats as its vote share dropped to 24.55%. Its vote share was propped up by SC, Sikh and Muslim voters. Of its elected MLAs, four were Muslims who had a strong presence in their constituencies, two were Sikhs and the remaining two were from the SC category.

As the results sprung a hung assembly for the first time, the Congress decided to extend outside support to AAP, which formed its first government in Delhi. Kejriwal became the chief minister.

But just 45 days into forming the government, Kejriwal quit abruptly, alleging that the Centre was not implementing the Lokpal. He decided to contest the 2014 Lok Sabha polls and take on the BJP’s prime ministerial candidate Narendra Modi from Varanasi.

AAP could not make much impact during the general elections. It won four seats in Punjab but failed to open its account in Delhi and elsewhere. With the Modi wave sweeping the country, the BJP won all seven seats in Delhi. It polled 46.40% of the votes, compared to AAP’s 32.90% and the Congress’s 15.10%. 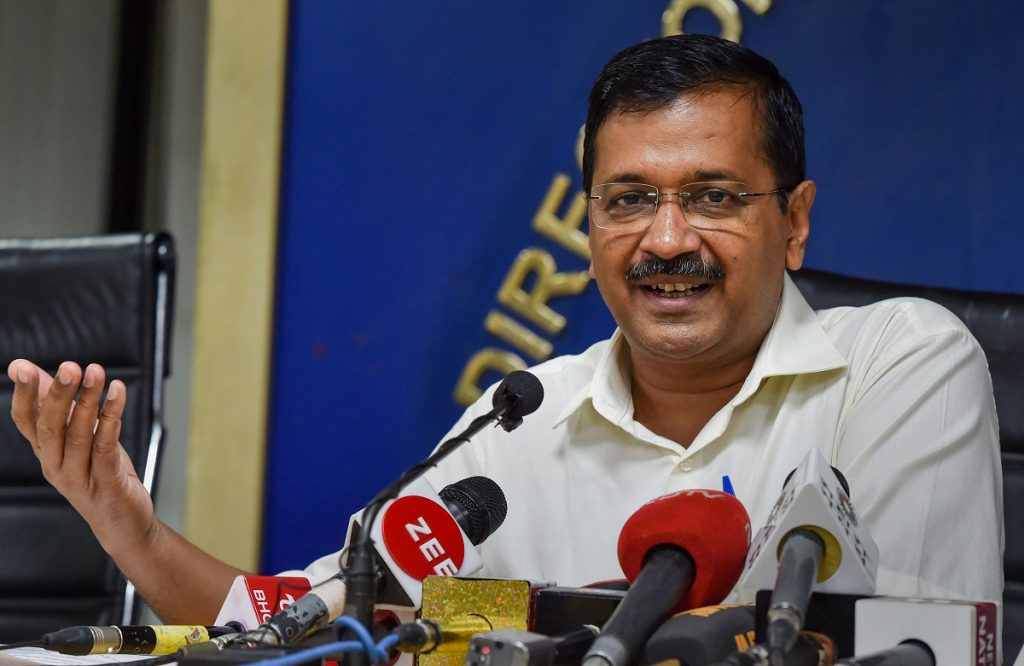 By the time the 2015 Assembly elections were held, it had become clear that AAP was the only capable force to pose a serious challenge to the BJP. The saffron party projected Kiran Bedi as its chief ministerial candidate for the polls.

As such, Kejriwal’s party won a record 67 seats in the polls with 54.34% of the votes. The BJP won the remaining three seats, polling 32.19% of the votes. The Congress was the biggest loser, failing to open its account for the first time and also saw its vote share plummet to a meagre 9.65%.

During his term, Kejriwal was in a continuous war of attrition with the Centre over jurisdiction, the authority to take decisions and run Delhi. The CM repeatedly attacked PM Modi, accusing the Centre of not letting him run the Delhi government and using the Lieutenant Governor as a pawn. The matter even went to the Delhi high court and the Supreme Court.

Despite the hurdles, the Kejriwal government has claimed major successes in the fields of education, healthcare, and water and electricity supply. It claims to have built over 20,000 classrooms in schools, operationalised 400 mohalla clinics, provided free electricity and power up to a certain usage and fulfilled all its 70 promises – even the one to provide free wifi.

Apart from the Kejriwal government’s performance, issues that may have a bearing on the outcome of the election includes its opposition to the Citizenship (Amendment) Act (CAA) and the National Register of Citizens (NRC). Other important issues include development works in unauthorised colonies, for whose regularisation a Bill was recently passed in parliament, and the government’s handling of the court-mandated sealing of commercial properties and the opposition to the move.

In the 2019 Lok Sabha elections, the BJP again won all the seven seats in Delhi. Its vote share improved to 56.58%. But one noticeable change was that the Congress returned to the second spot with 22.46% of the votes, while AAP was relegated to the third spot with 18% of the votes.

Will absence of CM face in BJP, Congress help AAP?

However, as the past has shown, assembly elections are a different game altogether. Though he has lost many friends of his own since the last assembly polls, Kejriwal is confident of another good showing for several reasons. The BJP does not have a strong person to project as its chief ministerial candidate; and the Congress, following Ajay Maken’s resignation as Delhi unit chief and the demise of Sheila Dikshit last year, is still a work-in-progress. Once again the support of minorities and backward classes could hold the key to the next government in Delhi.