BJP Has Lost the Delhi Elections, But Done Better Than it Did in 2015

Raking up ‘nationalism’, ‘Pakistan’ and polarisation on communal lines appears to have had limited success in the assembly elections. 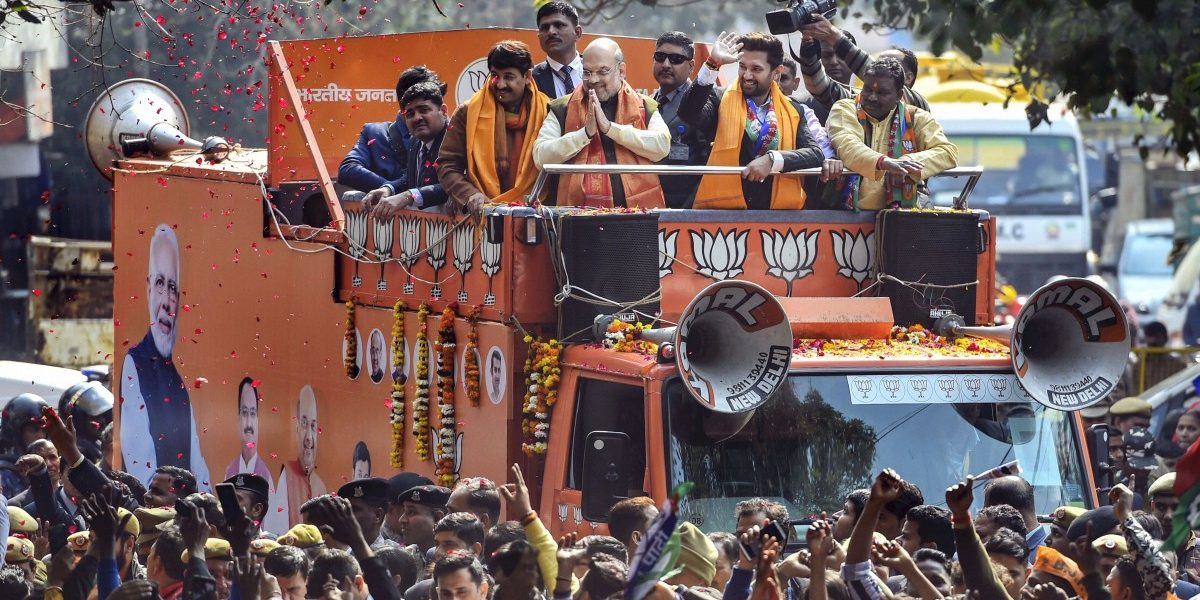 Amit Shah campaigning in the Seemapuri constituency ahead of the Delhi assembly elections. Photo: PTI

New Delhi: From winning three seats in the 2015 assembly elections in Delhi to leading in 13 of the 70 constituencies, as per the latest counting trends, the Bharatiya Janata Party (BJP) seems to have put up an improved performance in the 2020 polls.

As per the Election Commission of India (ECI) data, the BJP is ahead in all the three seats that it won in 2015 – Rohini, Mustafabad and Karawal Nagar. In addition, it is also ahead of its contenders from the ruling Aam Aadmi Party (AAP) in Bawana, Gandhinagar, Ghonda, Kirari, Krishna Nagar, Patparganj, Rohtas Nagar, Shahadra and Vishwas Nagar.

The party, which won all the seven Lok Sabha seats in the 2019 elections held last May, had managed to take its vote share from 32% to a whopping 58% then. It banked on a matching poll strategy of raking up ‘nationalism’, ‘Pakistan’ and polarisation on communal lines in the assembly elections too.

In the run-up to the February 8 polls, top party leaders tried to turn the anti-Citizenship (Amendment) Act protests in Shaheen Bagh in South-East Delhi into a communal issue in order to pick up votes. While its vote share in the 2019 parliamentary elections has come down drastically to below 40%, as per the latest ECI data, it is still ahead of its 2015 vote share. The BJP candidates seen ahead of their contenders from AAP in 13 constituencies so far also point that, to an extent, the BJP’s poll strategy seems to have worked.

On asked about it, Chinmay Dandekar, who was a part of the AAP election campaign team for South Delhi, where BJP has been traditionally strong, countered this narrative. Dandekar told The Wire, “BJP fought the elections on the flawed assumption that it can fight election after election on one template. …If a large and powerful party like the BJP is looking at today’s results and feeling happy that taking its seats from single digit to double digit is a victory, I don’t want to say anything more about it.”

Also read: Delhi Polls: With Only 4% Vote Share, Congress Could Lose Its Deposit in All Seats

AAP’s social media head Ankit Lal told The Wire, “More rounds of counting are still to happen and we are hopeful that BJP will be restricted to single digit in these elections too.” On asked whether its voters have shifted to the BJP, Ankit said, “It is not ours but Congress’s voters who shifted to the BJP.”

The BJP, which gave Delhi three chief ministers – Madan Lal Khurana, Sahib Singh Verma and Sushma Swaraj, all during one term between 1993 to 1998 – didn’t have a chief ministerial face to take on the incumbent Arvind Kejriwal of AAP in these polls. The party banked on its national face – Prime Minister Narendra Modi – who also campaigned for the elections and addressed two party rallies.

It also lined up all its chief ministers at various rallies, including those from the Northeast to soak votes from people from the region residing in Delhi.