Knowing there could be consequences, Padukone still stood up to be counted.

It would be a mistake to look at Deepika Padukone’s presence at a student protest in JNU as yet another celebrity photo-op.

While it is the stuff that the media loves – and the film industry has been largely reticent about making any public statement on issues of the day – Padukone’s gesture has resonance far beyond the mere fact of her showing up at JNU.

The anti-CAA and NRC demonstrations were citizen fuelled and led, and the outburst of student rage all over India’s campuses, after the events at JNU too was spontaneous. So, had Padukone not come one winter evening to JNU it wouldn’t have mattered.

But that she did, comes as a huge boost, not the least because it sharply focuses media and therefore public attention on the issue.

But by coming, she has added an extra dimension to the rising anger not just among students, but Indians at large, about what is going on in the country.

By not saying a word, but just greeting the injured president of the JNU students’ union, who was beaten up by masked storm troopers, she has been more eloquent than if she had given a soundbite to television reporters. To think of it as a publicity stunt because she has a movie releasing on Friday is silly, because that is just the time when she, normally, would stay away from anything remotely controversial. 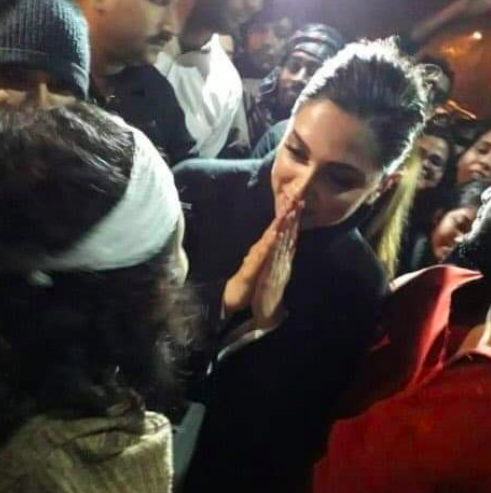 Producers don’t like their stars to be involved in anything contentious at any time, and definitely not on the eve of a film release—there is too much at stake. Yet, that is exactly when she has done it.

The significance in her public appearance and show of support lies in three things.

First, she is the only A-lister from Bollywood to come out in the open at a time when others have remained silent.

There have been notable exceptions, such as Richa Chaddha, Swara Bhasker, and Anuraag Kashyap, who have expressed their views against the government after the passing of the Citizens Amendment Act and now, at the violence against students inside JNU, and that is admirable, but their star wattage does not compare to Deepika’s.

All of them have been vocal in the past too, mostly on social media, and their views are well known. The other big names have been silent, even when there was a clamour for Shah Rukh Khan to speak up after the police charged inside his alma mater Jamia Millia Islamia.

Deepika was not one of those names that would come up whenever there was any discussion on the silence of the stars. This gender stereotyping is a harsh reality even in these times — there was criticism of the Khans and of Amitabh Bachchan, as if they are the only representatives of the vast film industry. In the film business, the women are seen as glamorous appendages to the heroes and this sentiment is echoed elsewhere too — they are not supposed to have an independent opinion, and certainly not on political and public issues.

Thus, Padukone came out of the left field, as it were, shocking everyone.

This adds to the potency of her action. No one ever expected she, of all people, glamorous and not particularly known for public utterances on any major issue of the day, would do something like this. True, she had once spoken about depression, and was hailed for it, but this is hardly the same thing. That she could be a thinking person, concerned about what is happening around her, has never struck anyone.

The big lesson is that pre-conceived notions are usually mistaken.

Finally, what she has done will now put pressure on her colleagues. It is not merely that they have been upstaged – no one, and certainly not a celebrity, likes that – but also that they cannot now remain quiet.

No one is about to rush to the next protest, that is for sure, but one way or the other, they will have to take a stand. Whether the CAA-NRC or violent raids on campuses, it is clear that the country is moving in a dangerous and incendiary direction. We have a government that is intolerant of dissent and is bent on marginalising the minorities and polarising the country. Communalism is on the rise and has official blessings.

With students leading the way and ordinary citizens coming out on the streets, can well known people, whose voice carry weight, afford to remain quiet?

One might point to the silence of his business peers after Rahul Bajaj spoke of intolerance at a public event, and it is more than possible that other Bollywood A-listers will refuse to come out of their shell now, but that will mark them as cowards who portray tough guys on the screen but wimp out in reality.

The BJP loves Bollywood — Narendra Modi regularly meets stars and ensures that their photographs are made public. The party has its supporters, including among the A-listers, even if none of them turned up at the dinner hosted by Piyush Goyal to clarify the government’s stand on CAA. But with Padukone demonstrating where her sympathies lie, others with similar views will feel compelled to do something to dispel the notion that they could be with the government.

One of the usual excuses trotted out by and on behalf of big names, whether in the corporate sector or the film industry, is that by criticising the government, they have a lot to lose. That their companies could be raided or their films could be stopped from being released.

That would be a financial loss many people would have to bear. That this is India, not Hollywood, where stars can lacerate Trump without worrying about a backlash.

This is true, but only partly. The government can be vengeful, as we have seen, and public displays of disaffection could have severe financial impact — Aamir Khan lost a big endorsement after a comment about how his family was worried about rising intolerance.

But then, that should apply to students too, whose careers could be jeopardised because they take part in protests. Their parents could face harassment. Yet, it hasn’t stopped students from public protests; nor have brave government servants like Kannan Gopinathan, aware that they could face enquiries even after resigning.

Also read: On His Way to CAA Protest, Kannan Gopinathan Detained by UP Police

In the Karnataka or Tamil Nadu film industry, there are several stars such as Prakash Raj, Siddharth and of course Kamal Haasan, who have openly stood up to the government.

And now Deepika has shown the way.

It is almost certain that she will pay a cost – personal and professional — for what she has done. For the moment, it is only bogus bogs who have apparently cancelled their tickets to see her new film Chhapaak. The usual trolls have gone after her.

Minister Prakash Javadekar has played down her presence at the protests, saying she has a right to criticise (a significant shift from the past), though that could change and we may never hear of it.

Knowing there could be consequences, Deepika Padukone has still stood up to be counted.

It may yet inspire others to do the same, or it may not. Either way, it is a big and memorable moment that will have a far reaching impact.