The core of Kashmir’s secular politics remains in place, and Kashmiriyat has yet again triumphed over sectarian majoritarianism. Counting of votes for the recently concluded District Development Council elections in progress at a centre, in Jammu, Tuesday, Dec. 22, 2020. Photo: PTI

The ruling Bharatiya Janata Party (BJP) is busy making a virtue of necessity.

All the “correct” noises are being made about how the democratic process has been restored in the downgraded erstwhile state of Jammu and Kashmir.

As if the voter in that beleaguered part of the country came out on the say-so of the government of the day.

That they did so owes entirely to their political sagacity, but clearly, they did not do so to notch up credit for the establishment.

Rather the contrary, it turns out.

Beginning August 5, 2019, the long-held Hindutva plan for the erstwhile state started to operate.

The ideological project to incorporate Kashmir into the majoritarian paradigm was inaugurated by the clandestine reading down of  Article 370. This required the enforced silencing of the political voice of the Valley, especially.

Consequently, the move was accompanied by the draconian confinement of mainstream leaders and the humiliating downgrading of the state into a Union Territory — never done before in the post-Independence history of the republic — and the imposition of direct Central rule.

This measure at one stroke robbed the state assembly of its constitutionally mandated prerogative to speak for the continuation or not of Jammu and Kashmir’s ‘special status’. Security personnel place a barricade on a street during the restrictions imposed on the first anniversary of revocation of the special status of Jammu and Kashmir, in Srinagar, Wednesday, Aug 5, 2020. Photo: PTI

For a whole calendar year, unrelenting propaganda was unleashed to claim that the mainstream leaders and parties had lost the favour of the people at large who had now decided to go over to the grand vision of the numero uno to effect  “development” in the state under the aegis of the ruling party and the benevolent political dispensation of the honourable lieutenant governor.

The question as to why such leaders needed to be incarcerated if they had indeed become defunct remained unanswered. As was the question as to why they were asked to sign bonds committing to not raise the matter of Article 370 in public were they to be let out if indeed Kashmiris no longer cared a hoot for the historical identity bestowed on them by provisions of Articles  370 and 35A.

The constitution of District Development Councils and the announcement of elections to these bodies were canny moves to depoliticise the state, and redirect popular activity to the ostensibly apolitical agenda of setting drains in order, planting electric poles, repairing roads and bridges, and giving young Kashmiris the opportunity to distinguish themselves in healthful sports events.

It was to be understood that an elected assembly was of peripheral concern to Kashmiris who now saw the great benefits of stilling their misdirected political disquiet in favour of uncomplaining cooperation with “nationalist” proprieties.

Always rubbishing the intervention of “foreign” voices in the matter of the Centre’s doings in the state as mischievous efforts to bring Indian democracy into disrepute, the Central government thought nothing of inviting chosen representatives of foreign nations to the Valley to certify the laudable democratic exertions of the Modi government vis-à-vis Jammu and Kashmir which, it was propagated, had lagged far behind the rest of the country in economic opportunities owing to the “special status” bestowed wrongfully on it by the “appeasing” Congress regimes of the past.

All that in the teeth of voluminous statistics that emphatically showed that the erstwhile state had in fact been doing far better in the arena of “development” than even the beloved state of Gujarat.

The final showpiece in this elaborately built deception was the declaration of elections to the district development councils.

All the “correct” noises about the grand restoration of democracy to the state’s people notwithstanding, the canny calculation of the powers-that-be was that the mainstream parties were too pulverised and relegated to venture into a participation in these projected elections. Thus, the electoral move was propelled by the anticipation that the ruling BJP would have an open field, and the opportunity of a lifetime to occupy the entire political space in the state.

A king’s party was floated as a substitute to the mainstream parties to show that local politics was alive and free to partake of the new democratic vision.

Ruthlessly excluded from any conversation with the people, these parties found themselves in an unenviable dilemma.

But they had the sagacity to understand that if they did not participate in the DDC elections, the boycott could not but spell a veritable political doom for them.

They understood that if they did not exert to reclaim political space given this opportunity of elections to the councils, another opportunity may not be forthcoming in a long foreseeable future. They also understood that merely participating was not enough and that a defeat at the hands of the BJP juggernaut would once and for all consign them to the category of  “dynastic” have-beens who had now lost all hold among the Kashmiris.

Also read: Let the Elections To District Development Councils in Jammu & Kashmir Be Free and Fair

The coming into being of the Gupkar Alliance was thus both a necessity and an astute realpolitik. Stunned by the resolve of the mainstream to give it a battle, the only two courses open to the ruling establishment were either to rescind the elections on one pretext or another, or make it as intractable as possible for the Alliance candidates to freely campaign among the electorate.

Events clearly had overtaken the Centre and the BJP to risk the opprobrium of cancelling the projected elections. Thus the second course was adopted. Candidates of the Alliance — now dubbed the “Gupkar Gang”— were sought to be corralled within closed confines on the pretext of security threats to them, while candidates of the BJP roamed freely with security cover from the state.

Against the official campaign that sought to malign politics and run on the “development” thesis, the mainstream knew that any return of political credibility to them could result only if they forthrightly campaigned against the reading down of Article 370 and for the restoration of “special status” granted to the state by the constitution of India after prolonged negotiations in the Constituent Assembly.

Thus, the Alliance was named People’s Alliance for the Gupkar Declaration.

That declaration, as we know, had stated as its objective opposing the rescinding of “special status” and striving for its reinstatement. That this bold principled resolve to stand by their commitment to the removed Article was, predictably, maligned was proof of their extra-nationalist loyalties to “separatism”.

During the campaign, whichever media group thrust a microphone into a voter’s mouth, they were told that people had determined to vote now for the new vision for the state strenuously propagated by the Centre and the ruling party.

But the results show that the people of Kashmir had a monumental con in mind.

Whoever may have taken the campaign voices seriously would not have but come to the conclusion that the BJP was set to sweep the state, the Valley included.

Yet, look at what has happened. Not only has the Alliance swept the Kashmir province but has registered victories in as many as 35 seats in the Jammu province. In contrast, the BJP has garnered a measly three seats in the Valley, owing principally to poor candidate selection by the Alliance in these seats.

Clearly, any media propaganda on behalf of the establishment that the results once again show a cleavage between the Hindu-dominated Jammu province and a Muslim-dominated Valley is just that —propaganda. The salutary fact is that whereas Hindutva has failed to conquer the Valley contrarily, it is the mainstream that has once again shown that its hegemony extends to large areas of the Jammu province as well. That the  National Conference has  25 seats and the Congress 17  in the Jammu province puts paid to that sectarian thesis. 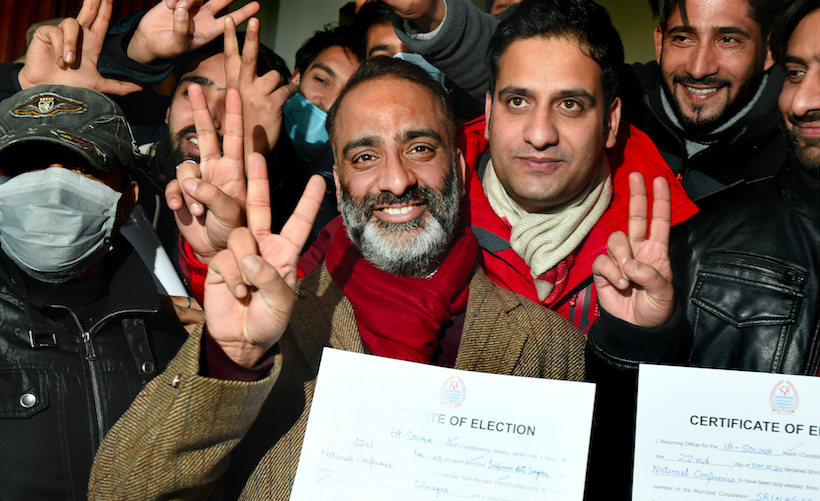 This may justly be interpreted as living proof that the core of Kashmir’s secular politics remains in place, and, if you like, that Kashmiriyat has yet again triumphed over sectarian majoritarianism.

Truly a consequence that brings heart and hope to a nation overwhelmed by forces of cultural and political reaction, and suffocated by authoritarian governance. Consider that even some Pandit candidates have won their seats on mainstream tickets.

This resounding affirmation of mainstream politics gives just basis for it to claim that their agenda of the restoration of “special status” has a mandate from the people — a claim that may not be rationally contested by a regime that never fails to claim that its 37%  popular vote in the General Elections of 2019  gives it the right to do whatever it likes, wherever it likes.

Project DDC elections having failed for the ruling BJP, the government of the day may be more than hamstrung now to resort once again to draconian measures,  to once again debilitate the career of mainstream politics and leaders in the state. Nor may it be so easy — given the ongoing historic farmer’s agitation — to clamp down on public mass activity in the state as herefore.

Equally, the establishment may think twice now to fulfil its commitment of restoring statehood to Jammu and Kashmir or holding elections to a new assembly.

Given that the new domicile laws have bitten hard in both provinces of the union territory, it may not be easy to contain popular mobilisation against these new measures that affect one and all in the state.

Also read: ‘Betrayed’: In Jammu, Growing Regret Over Support for Scrapping of Article 370

A situation may arise in which Kashmiris in both provinces find themselves obliged to come together, Hindutva notwithstanding, to battle together to regain what has been lost.

Never to forget that the democratic world watches events in Kashmir, and the new presidency in the United States may not be as obliging in the matter as Donald Trump.

More  than a millennium ago, Kalhana Pandit, the author of Rajtaringini, a text close to the official heart, had this for an epigraph: “Kashmiris can never be won over by force, only by love.”

Well, that love can only best express itself in the Centre’s acceptance of the demand for the restoration of Article 370, and the jettisoning of the Hindutva project vis-à-vis Kashmir.