What Triggered the RSS General Secretary's Tirade Against the Modi Government?

Material observations on the present government, publicly made by Dattatreya Hosabale, reflect the organisation's latent fear that identity politics has limited shelf life. 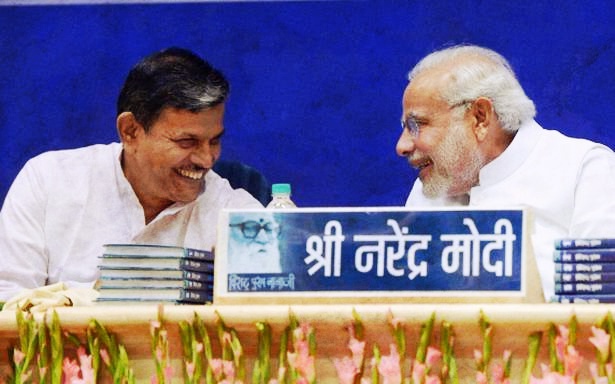 First a snapshot of what has reportedly been said.

And so on and so on.

Not Sitaram Yetchury, or Rahul Gandhi, or Arun Kumar, or Paul Krugman, but the General Secretary of the RSS, Dattatreya Hosabale.

It remains to be seen whether or not action will be initiated against the RSS (surely, while they may disown anybody else, they cannot disown their General Secretary?) for thus vilifying the image of Bharat, and bringing the duly elected government into disrepute.

The question remains: Why did he say what he did?

For one thing, the history of the RSS tells us that the Oracle frowns upon such ones who take it into their heads to think they have outgrown the mother-ship, and can fire on their own, in cahoots with one or two  corporates whose chief purpose is to loot, not to enhance Sangh ideology.

Indeed, there have been times when the RSS has bolstered leaders other than those belonging to the Sangh, such as, for example, Jayprakash Narayan in 1975, and then Indira Gandhi again in 1980 in the wake of the troubles in the Punjab. It was thought she who had brought about Bangladesh alone could sort out this other problem as well.

More helpfully, perhaps, in endorsing some parts of a critique that has in recent years come from the opposition, most of all, from the intransigent Rahul Gandhi, Hosabale’s averments could be read as cautionary missives at a time when the astute Sangh knows the situation to be far from conducive to its political fortunes in the coming days. It is thus nudging its self-absorbed satrap to make course corrections.

The larger lesson to take from the RSS’s acknowledgment of economic woes is the good old one: in the end, it is the economy, stupid.

Embedded in that acknowledgment is the fear that, however fiercely and persistently fake issues relating to identity concerns may be propagated, such politics does have a limited shelf life.

Time comes when the real distresses suffered by men, women, and children of all social and religious communities prompt them to come together and say “enough; fool us no more.”

Political opposition to the powers-that-be can thus take cue from what the RSS has felt compelled to say, and strengthen its conviction in foregrounding people’s material concerns with greater vigour, home-work, and mass dissemination.

It was sensible for many non-Congress sections of the political opposition to disregard apprehensions that normally attend on regional concerns, and to turn this Yatra into the united mass movement the republic requires.

Such a united movement could show up the disingenuous hollowness of what is claimed to have been achieved through the life of the Modi regime, and to re-establish the politics of welfare and reasoned and lasting people-oriented policy initiatives  whose consequences can be both seen and accounted for.

In making no allusion to inter-community matters that have been so unprecedentedly fraught in the Modi-era, the Oracle may have left a window open for a way to a  final and familiar rescue for the Hindutva forces.

Ironically, such an eventuality can best be countered by the material observations now publicly made by the RSS General Secretary himself.