Understanding the Demand for Self-Rule in the Darjeeling Hills

Historical and geographical flux, a continuous feeling of exclusion and perceived cultural dominance by Bengalis have aggravated the demand for the creation of Gorkhaland.

A protest march organised by the Gorkhaland Janmukti Morcha in the Darjeeling hills. Credit: PTI/Files 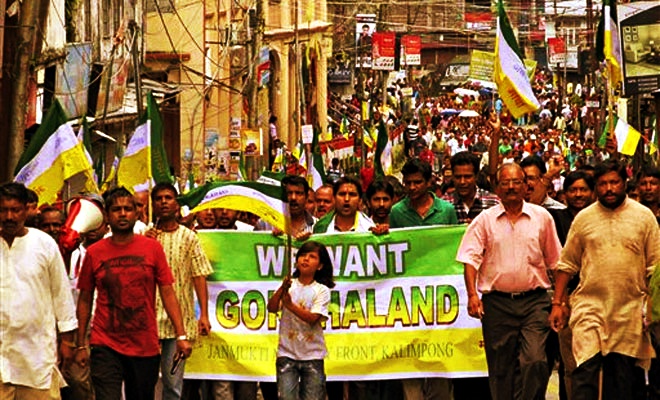 A protest march organised by the Gorkhaland Janmukti Morcha in the Darjeeling hills. Credit: PTI/Files

The aspiration for self-rule of the hill people in Darjeeling is more than a century old. To be precise, such aspiration for autonomous rule can be traced back to 1907. The complicated narrative of such aspirations is further complicated by the diverse ethnic identity of the hill people. For instance, the Nepali-speaking hill dwellers of Darjeeling who travel to ‘mainland’ India, are often regarded as ‘Nepalese from Nepal’, putting a question mark on their identity. Such exogenous factors, in addition to a host of other parameters, has often consolidated the aspiration for identity within a community of people. In this case, the hill people in Darjeeling want to be recognised as Gorkhas belonging to ‘Gorkhaland’ – the state they aspire to form.

The geography of this frontier has been in flux for a long time. Originally, Darjeeling belonged to Sikkim, which was acceded to Gorkhali kingdom (present-day Nepal) and thereafter to the British. It was restored to Sikkim only to be ‘gifted’ to the British in 1835 before being merged with West Bengal in 1954 under the Absorbed Areas Act. This mired geographical history often aggravates the feeling of exclusion, which intermittently shows itself in protests – especially when the hill dwellers believe themselves to be dominated by state or non-state actors from the plains.

The institution of the Darjeeling Gorkha Hill Council in 1988 ended the cycle of violence that engulfed the area between 1986-88. However, it failed to deliver any results. Following the unsuccessful experiment, yet another administrative body, the Gorkhaland Territorial Administration (GTA), was instituted in 2011. This provided official recognition to ‘Gorkhaland’. But the GTA too, like its predecessor, lacked sufficient autonomy. It is worth noting that neither successive state governments (until the recent threat surfaced) nor the administrative set-ups in the hills ever felt the need to furnish accounts of public funds disbursed to them. This mutually acceptable lack of accountability was gainful for both the state government and the GTA, until they collided with each other.

Also read: Here’s What the West Bengal Government Must do to Resolve the Darjeeling Hills Unrest

Language has always been a contentious issue in the hills of Darjeeling and the state has ‘used’ the census as a tool to portray Nepali speakers as minority in these areas, even though they happen to be in a majority. The Nepali language movement of the 1960s in the hills has been a manifestation of this cultural trend. The West Bengal government, along with the central government, played the politics of census enumeration in identifying Nepali as a non-majority language so that they could avoid making Nepali the medium of instruction in schools in Darjeeling.

Moreover, the perceived cultural dominance of Bengalis in the hills widened the gulf between these two communities. For the last two years, the chief minister of West Bengal has celebrated the birth anniversary of Subhas Chandra Bose in Darjeeling by organising concerts of Baul songs, which is traditional Bengali folk music. According to Swaraj Thapa, a member of the Gorkha Janmukti Morcha, this was perceived as contentious by Darjeeling dwellers. It should also be noted that that most of the premier educational institutions in West Bengal do not offer Nepali as a subject of study.

When the schools in Darjeeling were already offering Bengali as an optional subject, what was the need for the state government to make such a declaration? Was the declaration aimed at consolidating the Trinamool Congress’s gains in the recent civic polls? Political commentators have also speculated that the motive behind such a move was to contain the BJP, fast emerging as a force to reckon with in West Bengal. Did Mamata Banerjee want to leverage the Bengali language in her fight against Hindi imperialism driven by the Hindu-Hindi ideology? But this explanation perhaps falls short when we observe that the governments of Karnataka and Kerala have made similar declarations, making  the languages spoken by the dominant majority in their respective states compulsory in schools.

There are also other critical factors at play. The activists are demanding the inclusion of the hill areas of Darjeeling district, Kalimpong district and parts of Siliguri, Terai and Dooars of Alipurduar and Jalpaiguri districts in the proposed Gorkhaland state. But contradictions arise when we consider the demographic profile of these areas. Gorkhas constitute only 35% of the population, while the rest comprise Adivasis (20%), Bengalis (15%), Rajbangsis (25%) and Totos, Mech and others (5%). Under such circumstances, how can the activists be sure that other population groups and communities who inhabit the region will accept the state of Gorkhaland?

Moreover, the Sherpas, Bhutias, Lepchas and other ethnic communities do not share the Gorkhas’ vision of self-rule. Perhaps these fissures drove the state government to promote 15 different development boards in the hills.

Controversy also arises whenever the Sikkim Democratic Front and the Sikkim Krantikari Morcha extend their support for the creation of Gorkhaland and the merger of Darjeeling with Sikkim. Both points of view are rooted in their shared history, since Darjeeling had originally been a part of Sikkim.

The hills of Darjeeling are at a crossroads today. While there is unequivocal support for the formation of Gorkhaland in the hills, none of the central units of national parties support their cause. Even the BJP, which in its successive Lok Sabha election manifestos between 2009 and 2014 had promised to “sympathetically examine and appropriately consider” Gorkhaland, is no longer sympathetic to the issue. All the district units of these parties in the hills, supporting Gorkhaland, are at loggerheads with their central units. This has further diminished possibilities of a solution.

While for the people in the hills, and their organisations, this appears to be a ‘final’ battle to push for their aspiration of self-rule, a host of other players – including state and central governments, and political parties in the plains – are eyeing electoral possibilities and dividends. It is obvious that in this game of electoral numbers, political parties could well sacrifice the aspirations of the hill people.

Biswanath Saha is senior research fellow at the Institute of Development Studies Kolkata, where Gorky Chakraborty is associate professor. Views are personal.