The incident occurred on Monday morning, when 46-year-old Balu Sarvaiya and other members of his family were skinning a cow carcass. 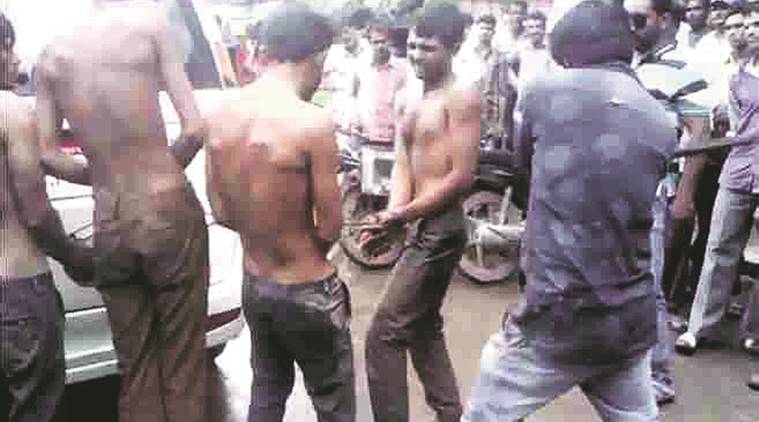 A video grab of the incident where 'gau rakshaks' brutally attacked a Dalit family in Una, Gujarat. Credit: ANI/Twitter

According to a report in The Indian Express, seven members of a Dalit family in Gujarat were allegedly beaten by gau raksha (cow protection) activists for skinning a dead cow on Monday. A part of the incident, where the victims were being attacked with iron rods and sticks, was recorded on video and has been widely shared on social media.

The incident occurred around 10 am on Monday, when 46-year-old Balu Sarvaiya and other members of his family were skinning a cow carcass in Mota Samadhiyala village, Una taluka. In his statement to the police, Indian Express reported, Sarvaiya’s son Vashram said they had bought the carcass in Bediya village. “The accused came in a white car and asked why we were slaughtering the cow. I told them that the cow was dead and that we were merely removing its skin. But they started abusing us and attacked us with iron pipes, sticks and a knife with which we were removing the skin of the carcass,” Indian Express quoted Vashram’s complaint as saying. The complaint added that the victims’ cell phones were also stolen.

Vashram has named six people in his complaint.

After beating up the family in the village, reports said, the accused put four of the victims in a car and drove them to Una town. There, they stripped the four men, paraded them on the streets and hit them in full public view. When the police arrived, the attackers fled in their car.

Based on the complaint, the Una police booked the six accused for attempt to murder, dacoity, criminal intimidation and under the Scheduled Caste and Scheduled Tribe (Prevention of Atrocity) Act. Three of them, who could be identified from the video, were arrested on Tuesday, police said.

“We have arrested three persons in this connection while three others are absconding. We have also called a team of forensic science laboratory experts and veterinary doctors to ascertain if the cow was already dead before being skinned or was killed for skin,” deputy superintendent of police K.M. Joshi told Hindustan Times.

The family is being treated for their injuries in a local hospital.

Incidents of this kind, where gau raksha activists have felt it fit to take the law into their own hands, have been on the rise in recent times. Last month, cow vigilantes in Rajasthan beat up three people who were suspected to be transporting cows and stripped of them naked. Reports have said state police, Bajrang Dal members and Gau Raksha Samiti activists were involved in the incident.

In March this year, Mustain Abbas was killed in Haryana, allegedly by gau rakshaks, when he was transporting newly-purchased bullocks to use on his fields. According to his family, police officers have been threatening them instead of going ahead with the investigation and holding those responsible culpable.

Also in March, two Muslim cattle traders (including a 12-year-old boy) were hanged from a tree in Latehar, Jharkhand, allegedly by a cow protection group. Police handling of this situation has also come under a lot of criticism.

Around the same time, four students from Jammu and Kashmir were beaten by a mob in Rajasthan

Another beef-related killing took place in October 2015 in the state of Jammu and Kashmir, when Zahid Ahmed, a 19-year-old truck driver, was attacked by a mob and set on fire inside his truck on the Jammu-Srinagar road for allegedly slaughtering cows.

In September 2015, Mohammed Akhlaq was lynched to death by a mob in Dadri, Uttar Pradesh, after people suspected that he had beef in his fridge.