The uneven pattern in the party’s electoral fortunes across the seven phases of the election is evidence that ‘Good News’ can indeed help swing an election. 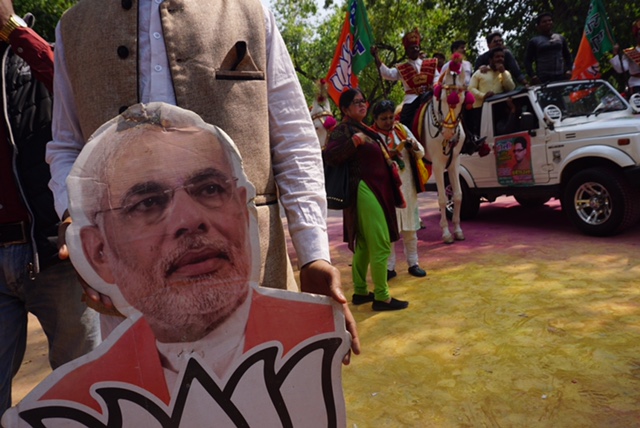 Bagging three-fourths of the 400-plus legislative seats in a state with over 140 million voters was an extraordinary political feat for anyone. The last time anyone pulled it off in Uttar Pradesh was four decades back, when the Janata conglomerate rode high on the political tsunami that swept away the imperious regime of Indira Gandhi after the Emergency. So when Narendra Modi took his Bharatiya Janata Party to a similar electoral triumph in the state last week – mid-way through his five-year prime ministerial term – it was nothing short of stunning. It sealed Modi’s peerless position in Indian politics and, barring unexpected turns and formalities, places him as the front-runner for the 2019 general election.

Yet the brilliance of the electoral success shouldn’t blind one to an underlying trend that holds toxic consequences for democracy in the country.

On February 12, one day after the first phase of the staggered seven-phase UP election had ended, the high-circulation Dainik Jagran newspaper published exit poll results projecting victory for the BJP in the state.

Since the publication breached the Election Commission’s ban on exit polls during elections, cases against the newspaper were registered and an editor arrested. Although Dainik Jagran quickly removed the content from its website, the news of the imminent BJP victory continued to be shared widely across the state as WhatsApp messages. This well-timed spread of highly favourable information, some have argued, gave the BJP an advantage in the later phases of the election.

What translated the advantage into real electoral gains for the BJP in UP is the size of its floating voters. A substantial segment of the state’s electorate votes for different political parties in different elections. In the 2014 Lok Sabha election, for instance, about 25% of UP voters switched from the party they had supported in 2009 to vote for a new party. 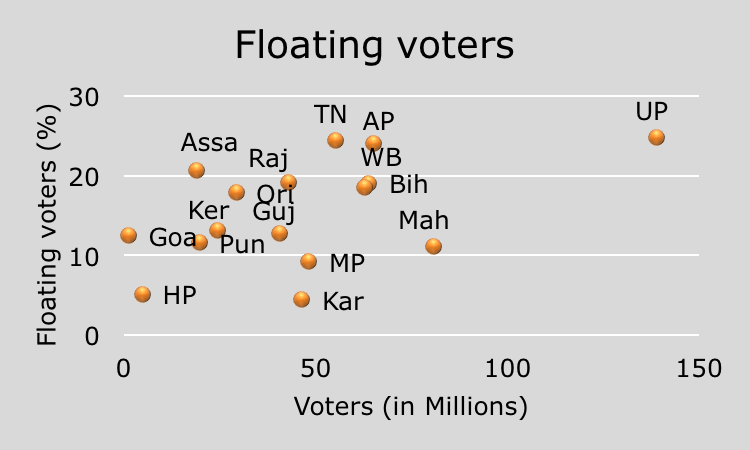 The percentage of floating voters – voters who vote for different parties in different elections – is estimated using the Pedersen index, which calculates the net percentage of voters who change parties between two elections. Source of data: Election Commission of India website.

Unlike the loyal party voters, who reliably support their party candidates out of firm ideological or identity-driven convictions, the floating voters support parties that are likely to win the election. Social scientists have long speculated about the motivations that impel the floating voters to support the likely winner. For one thing, siding with the winning side brings emotional gratification from having picked the winner, as in any competitive sport. It may also bring material benefits when the winning party rewards its supporters after coming to power. Whatever be the motives, the floating voters usually plump for the winner.

The catch, though, is that the floating voters seldom know for sure who the winner will be and, thus, often end up dividing their votes among several parties that stand a chance at winning. This uncertainty among voters as to who will win the election, in effect, creates a level playing field for the political parties in the fray.

The Dainik Jagran exit poll lopped off that uncertainty this time around in UP. It informed the voters – at a time that was most crucial for their decision-making process – who the winner was most likely going to be, thus enabling a big chunk of floating voters to jump on the BJP bandwagon.

How an electoral ‘wave’ got created

Consider the BJP’s performance across the different stages of the 2017 UP election. Across the state, its vote share in 2017 dipped slightly – by 2.6% – from 42.3% to 39.7%. But compared to the results from the assembly segments of the 2014 Lok Sabha election, the party’s vote-share declined sharply in the first phase of the state election, on average by about five percentage points.

Part of the decline in the BJP’s vote share in 2017 is driven by how well it did in the 2014 election. The graph below therefore corrects for this base effect. We can see how votes surged in favour of the BJP after the propagation of the Dainik Jagran’s exit poll results. From the second phase of the election onwards, the party started securing close to the broad electoral support it had in 2014. 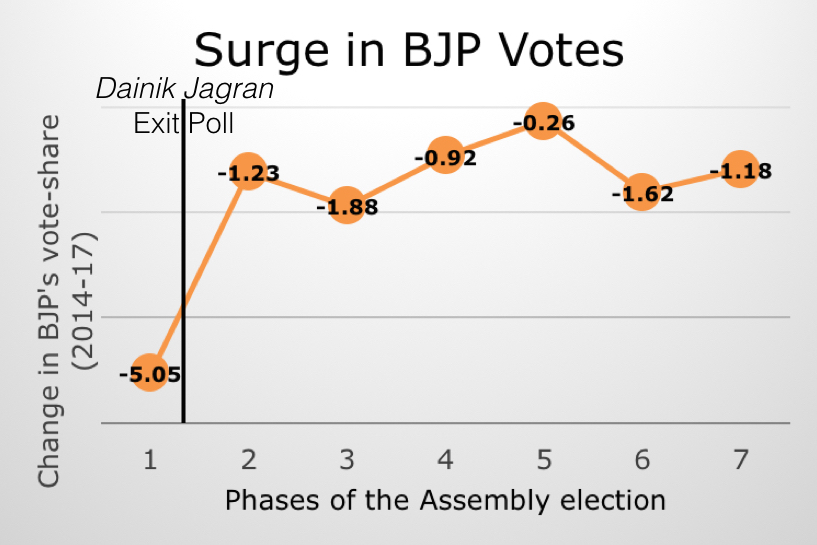 This improvement in the BJP’s electoral fortunes after Dainik Jagran’s exit poll is also apparent when we move beyond average vote changes in the different phases to consider the party’s performance in all the constituencies.

Before the ‘exit poll’ of February 12, the BJP fared poorly compared to its performance in the 2014 election; its vote-share contracted in 80% of the constituencies in the first phase of the election. This southward drift in the party’s fortune was staunched once the Dainik Jagran exit polls were propagated. In the later phases of the election, the BJP performed better than it did in 2014 in 43% of the constituencies. 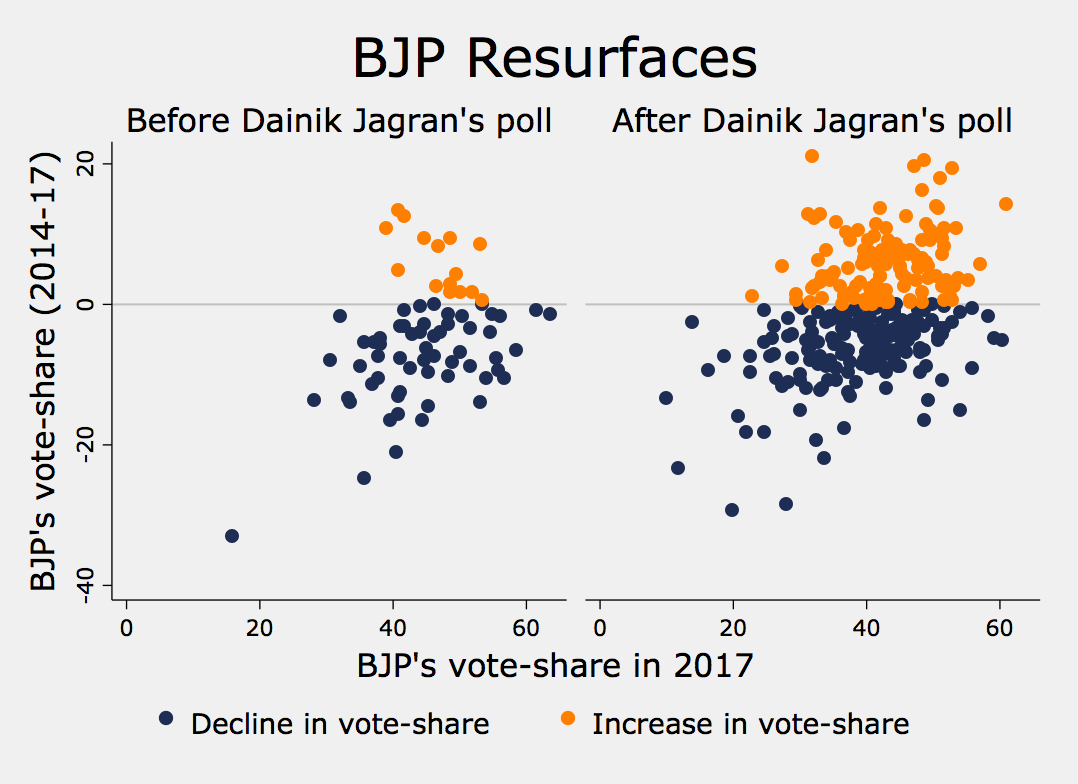 Arguably, this surge in favour of the BJP in the later stages of the election could be because the BJP rank and file got energised after the first phase, because the BJP resorted to polarising techniques and because in Narendra Modi himself blitzed the state with an indefatigable campaign. But, as an investigative report in The Wire revealed, the Dainik Jagran news was meant to staunch the morale of BJP activists from eroding after the first phase, and to galvanise them to redouble their canvassing in the later stages of the election.

Even so, vote surges of the magnitude that we see after the first phase of the UP election don’t result solely from energetic campaigns and canvassing. They require a widespread realisation among voters that the BJP is all but certain to win the election – and for a significant number of them to vote for the party accordingly. Such widespread voter realisation is hard to orchestrate in the absence of Dainik Jagran­-style voter manipulation.

The uneven pattern in BJP’s electoral fortunes across the phases of the state election in fact bespeaks a ‘Dainik Jagran wave’ at work in UP in 2017. Contrast this to the BJP’s performance in the 2014 Lok Sabha election, when a Modi wave swept the state and spiked the party’s vote-share uniformly across all phases of the election.

There is another indirect and dodgier way in which the exit poll could have affected the eventual electoral outcome in UP. Dainik Jagran’s poll not only projected the BJP to be the likely winner, it also placed the Bahujan Samaj Party ahead of the Samajwadi Party in the electoral contest. This however proved to be wrong; the SP alliance won more votes than the BSP even in the first phase of the UP election.

An artifact of the poll process or an artifice, this misleading projection could well have turned those who didn’t wish to vote for the BJP away from the SP alliance towards the BSP, or have left them divided between the two parties. Several analyses suggest that the Muslim voters, who generally don’t support the BJP, got split between the BSP and the SP alliance, delivering more seats to the BJP. A survey of Muslims voters across the state reveals that the community voted for the SP alliance in western UP, held in the first phase, but shifted its votes to the BSP in the later phases, held after the exit polls were released.

Either way, the Dainik Jagran news seems to have successfully misled the opposition voters, and forestalled them from consolidating behind a single opposition party or alliance, which could have checked the BJP.

A new kind of news and democracy

To highlight the electoral impact of the Dainik Jagran exit poll is not to suggest that the BJP wouldn’t have won the election anyway. Even in the absence of the conveniently timed exit poll, it might still have won, given the disunited opposition – though the magnitude of victory in terms vote share and number of seats may not have been so dramatic. However, there is a broader point that the Dainik Jagran case raises.

The way the news of its exit poll helped tilt the scales to favour one party in the UP election comes at a time of global concern in democracies with the implications of fake news, editorialised reporting, and alternative facts.

The Dainik Jagran case indicates that India is not immune to the pernicious effects of this new form of ‘news’. In fact, if left unchecked, it can corrode the very democracy that Indians rightfully take pride in.

Anoop Sadanandan is the author of Why Democracy Deepens: Political Information and Decentralization in India, published later this month by Cambridge University Press.