Around 125 MLAs and 17 opposition MPs cross-voted in support of the NDA candidate, to give Droupadi Murmu an overwhelming lead over her rival Yashwant Sinha. 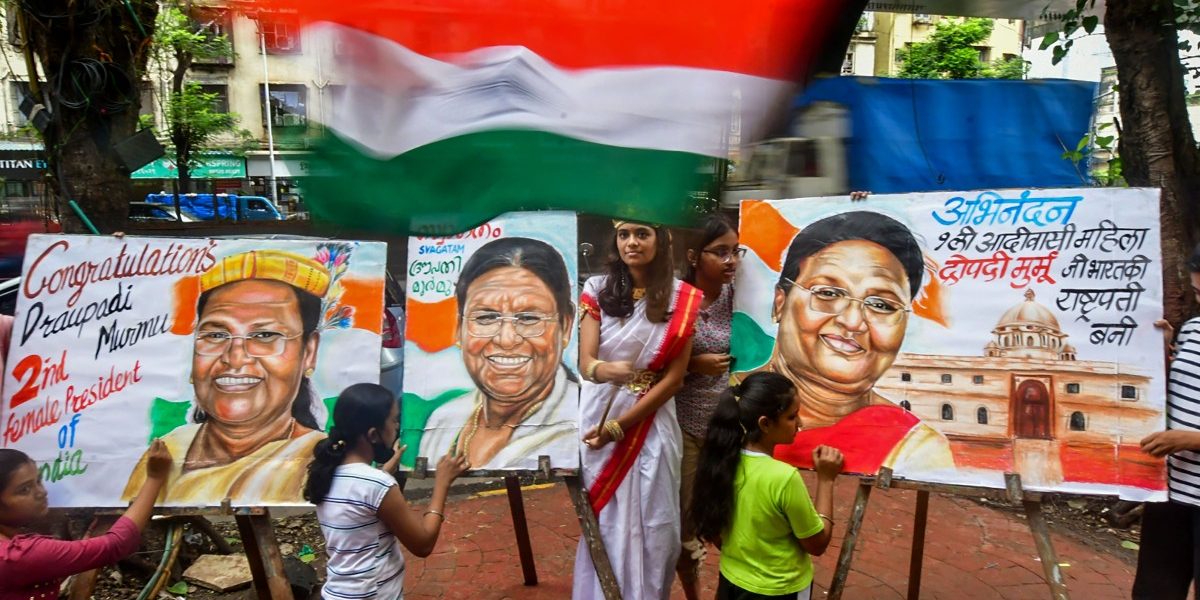 Students paint portraits of Droupadi Murmu, who is set to be Indias first President from the tribal community, in Mumbai, Thursday, July 21, 2022. Murmu leads by a huge margin during counting of votes for the Presidential elections. Photo: PTI.

New Delhi: The presidential poll has exposed cracks in the opposition camp, as a large number of MLAs and MPs from the opposition parties have voted in favour of National Democratic Alliance’s candidate Droupadi Murmu.

It is estimated that around 125 MLAs and 17 opposition MPs cross-voted in support of Murmu, to give her an overwhelming lead over her rival Yashwant Sinha. While Murmu polled 64% of votes, Sinha secured 36% of the votes.

Similarly in Madhya Pradesh, Murmu had won 16 extra votes. She received 146 votes, and Sinha polled 79 from the state assembly.

“Droupadi Murmu got more than the BJP votes. I thank the other party MLAs who listened to their conscience and voted for our candidate,” Madhya Pradesh chief minister and BJP leader Shivraj Sigh Chouhan said in a video message.

Although BJP has 69 MLAs from West Bengal, Murmu polled 71 votes, indicating cross-voting. Sinha did not even receive the support of all opposition MLAs from his home state of Jharkhand; he received the votes of nine out of 81 MLAs.

Surprisingly, Murmu also received the support of one MLA from Kerala’s 140-member assembly, where the BJP-led NDA does not have even a single legislator. Both the ruling Left-led ruling coalition and the opposition Congress-led UDF extended their support to Sinha.

The single vote in favour of Murmu from Kerala has over-joyed the BJP, which called it more valuable than the rest of the 139 votes in the state.

From the state of Maharashtra, Murmu garnered the votes of 181 MLAs, whereas recently 164 NDA MLAs voted in favour of Eknath Shinde during the recent trust vote. This is because the Uddhav Thackeray faction pledged its support to Murmu’s candidature although the opposition stood by Sinha.

Some Trinamool Congress legislators from Meghalaya cross-voted in favour of Murmu. In Manipur, Congress MLAs threw their weight behind the NDA candidate. It has also emerged that six opposition MLAs each from Bihar and Chhattisgarh, four from Goa and 10 from Gujarat also voted for Murmu.

Sinha did not receive a single vote from state assemblies in Andhra Pradesh, Sikkim and Nagaland.

Although Murmu’s victory was a foregone conclusion even before the polling – given that non-NDA parties have lent their support to her candidature openly – such large cross-voting against the opposition candidate was not expected.

Murmu as the President of India marks a number of firsts, including the fact she will be India’s youngest president ever at 64 and the first tribal to hold the top constitutional post in the country.