Whatever the BJP May Say, the Cost of 'Protecting' Cows Is High

A new report by Human Rights Watch points out the impact of 'cow protection' on agriculture, industries and India's minorities. New Delhi: A new report from Human Rights Watch looks at the issue of violence related to cow protection in India and its impact on minorities. It analyses the political, legal and economic issues around cattle trade and cattle-related vigilante violence.

The report says that there has been a rising cost of protecting cows, which has impacted agriculture, trade and livelihoods of those involved in the cattle industry (such as farmers, herders, transporters, meat traders and leather workers).

The report titled ‘Violent Cow Protection in India: Vigilante Groups Attack Minorities’, begins by drawing attention to the political environment that has incubated this violence by vigilantes.

Also read: An Adivasi Woman in Jharkhand Is Taking on the ‘Gau Rakshaks’ Who Killed Her Husband

It says that since the Bharatiya Janata Party has come to power in 2014, they “have increasingly used communal rhetoric that has spurred a violent vigilante campaign against beef consumption and those deemed linked to it”.

The victims of this violence have largely been members of India’s minority communities such as Muslims, Dalits and Adivasis, the report says.

Impact on trade and livelihoods

Over 50% of the Indian population is engaged in agriculture and associated activities such as trading of livestock and dairy products. India is the largest milk producer in the world and has about 190 million cattle and 108 million buffaloes. India has also been the largest beef exporter in the world.

The Human Rights Watch report carries interviews with experts and also people engaged in the supply chain of the cattle industry, where they analyse the impact of the violence. “It’s too huge a risk. These cow protection groups damage the vehicles, set them on fire, beat, or even kill drivers. No driver wants to do this work anymore,” said one transport company owner to Human Rights Watch.

Meat shops and slaughter houses are largely run by Muslims. Carcasses of meat have mostly been disposed off by Dalits. The risks that have become attached to dealing with any form of meat have impacted the livelihoods of these communities.

P. Sainath, journalist and expert on Indian agriculture, told Human Rights Watch that many people find it difficult to sell their cattle because they could be attacked by mobs, and if they do sell it, the prices are very low. So several cattle owners allow the cattle to die or abandon them. If not this, owners are forced to house the cattle even when they cannot afford to feed them. Abandoned and stray cattle have been seen destroying crops.

Also read: Are Cow-Related Hate Crimes Against Muslims Only a ‘New India’ Phenomenon?

India’s massive meat and leather industries have seen a decline in the percentage of their growth, according to data from the Ministry of Commerce and Industry.

What lawmakers have said about cow protection 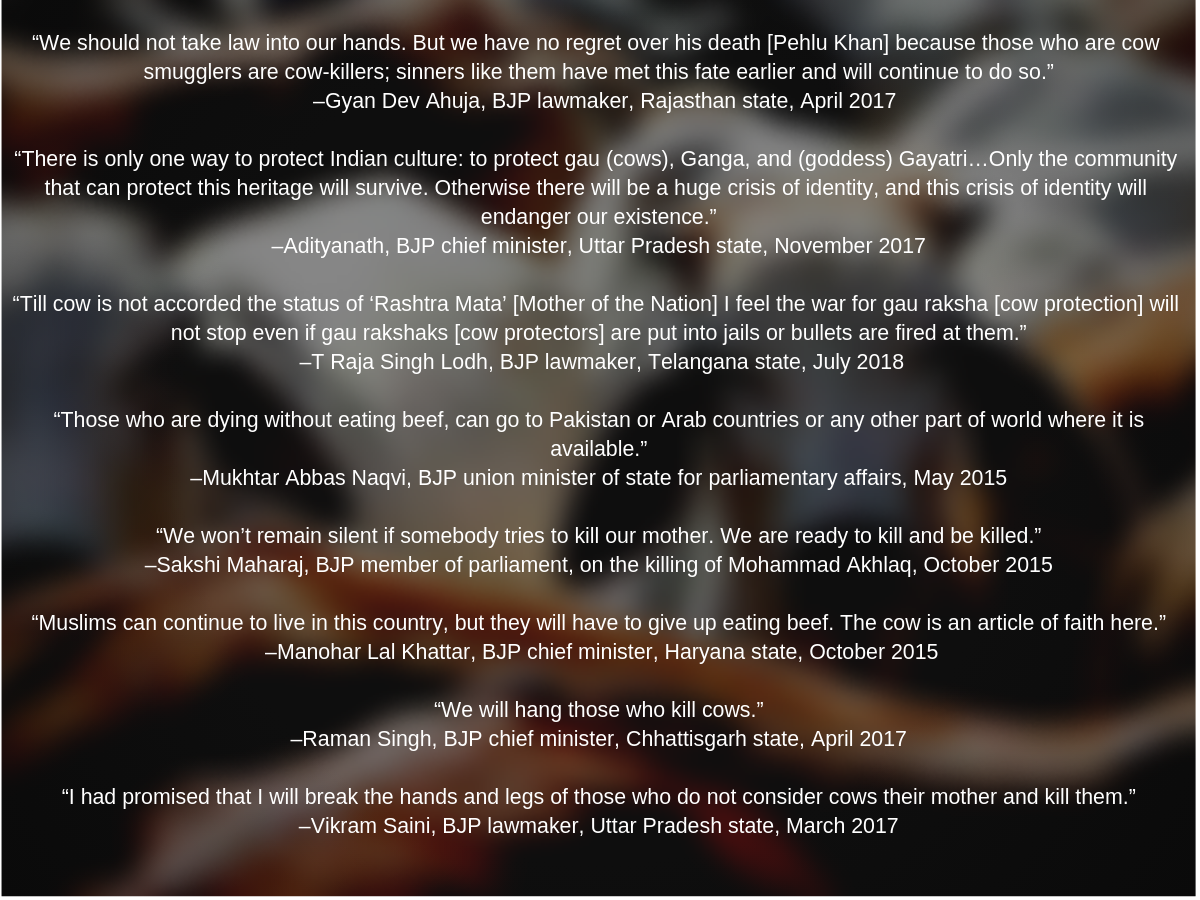