Seva enables the RSS to carry out the construction and reaffirmation of the Hindu identity at an everyday level, enabling it to garner goodwill of the people while posing as an ostensibly apolitical and cultural force. 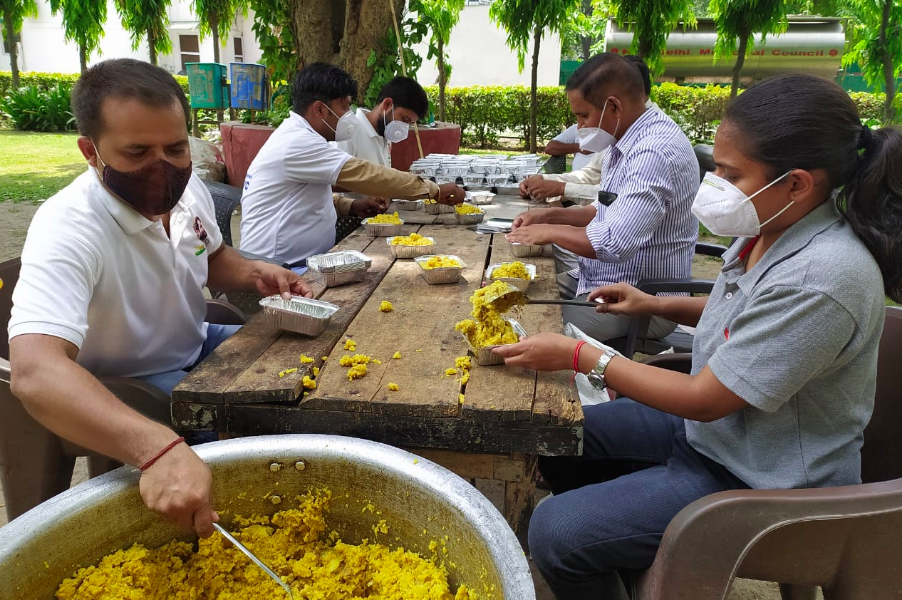 Members of Youth Congress pack food packets in a photo tweeted by the organisation. Photo: Twitter/@IYC

The brutal second wave of the COVID-19 pandemic has hit an ill-prepared India hard. There is a growing international consensus that in the face of calamity the state melted and abandoned the people. Even in these times of catastrophe, the handlers of the ruling regime have not been able to elevate themselves above cynical political machinations and remain much more concerned about saving the image of Prime Minister Narendra Modi rather than saving the lives of the people.

This is borne out, by the massive underreporting of the death toll by the government. The double mutant strain which wreaked havoc in the second wave is not more lethal but has a higher transmissibility rate. This rapid transmission of the virus, enabled by a complacent and clueless government, had a two-fold effect – firstly, it destroyed the already crumbling medical infrastructure and secondly, while the first wave impacted mostly the poor; this time around, it engulfed the middle classes as well, compelling the mainstream media to cover its disastrous effects.

Also read: Interview: ‘Many Differences but Also Similarities Between Now and Emergency in 1975’

Abandoned in the face of such an unprecedented crisis, the people got together to establish ad-hoc, informal networks to answer the desperate calls for help via various civil society and religious groups, political organisations, corporate houses, social media influencers, celebrities and even common people. While many civil society organisations and celebrities like Sonu Sood and Virat Kohli have rightfully earned a lot of praise for their relief and fundraising work during the emergency, the Modi government took an uncharitable view of such efforts conducted by opposition political leaders and went ahead to criminalise and intimidate those involved in such work.

Three such instances of political targeting of relief work merit a mention here – the first case was of B. V. Srinivas, the leader of the Indian Youth Congress, who was summoned for questioning by the Delhi Police after a tweet by a foreign embassy asking him for help on Twitter went viral.

Srinivas had set up #SOSIYC on twitter and had got international attention for his team’s relief work. The second case is from Bihar, where Pappu Yadav, leader of the Jan Adhikar Party, was arrested immediately after he carried out a ‘raid’ on the premises of Bharatiya Janata Party (BJP) MP Rajiv Pratap Rudy and raised questions about the unused ambulances there. Finally, the BJP-led Gujarat government, froze the account of an NGO trust for which independent MLA Jignesh Mevani had made fundraising public appeals to get oxygen concentrators. Seva and Hindutva: politics by other means

While some might find these actions overreactions of an insecure regime, such acts are not arbitrary. In order to locate their political importance, we must understand the importance of “Seva” or service in the ideological and organisational complex of Hindutva. It must be emphasised that while Prime Minister Modi remains popular and influential, he is merely serving as the face of the political arm of the Rashtriya Swayamsevak Sangh (RSS). Even the all-powerful Modi remains a bit player in the larger project of the establishment of the Hindu Rashtra.

It is foundational to the worldview of the RSS that its primary site of power is the society not the state; towards this end, it has used the medium of Seva or social service to extend its influence and acceptability within the society and mobilise supporters for its cause. It must be noted that Seva as a tool of political mobilisation, was popularised by Gandhiji and other nationalists during the independence struggle. The Gandhians took up this method to embed themselves within the social fabric and raise the anti-colonial consciousness of the people while facing a hostile colonial state.

In its early phase, the RSS concentrated mostly on ideological training and cadre-building through its network of shakhas. The method of Seva was used sparingly and in a calculated manner, unlike Gandhians, to serve communal ends – for example, by serving Hindu refugees during partition. However, after being banned and ostracised from the political mainstream in the aftermath of Gandhiji’s assassination, sarsanghchalak M.S. Golwalkar made Seva the primary means of political and ideological penetration of Hindutva. A man rides his bicycle past volunteers of the Hindu nationalist organisation Rashtriya Swayamsevak Sangh taking part in the “Path-Sanchalan”, or Route March during celebrations to mark the Vijaya Dashmi or Dussehra in Mumbai, India October 11, 2016. Photo: Reuters/Shailesh Andrade/File Photo

Seva enables the RSS to carry out the construction and reaffirmation of the Hindu identity at an everyday level; it enables cadre-building and their politicisation but most importantly, it enables the RSS to garner goodwill of the people while posing as an ostensibly apolitical and cultural force. This goodwill and network are employed towards the attainment of various ideological and political ends. In other words, it enables them to enjoy power within society without any accountability. It is primarily through thousands of such seva prakalp (projects) that RSS carries out, its ideological politics across the country today.

Also read: The Deep Roots of RSS’s Anti-intellectualism and Its Disregard for Dissent

In their attempts to organise relief work during the pandemic, these three gentlemen did not only expose the vacuous claims of the narcissistic but terribly ineffective Modi government, they unwittingly upstaged even the RSS. It is one thing for celebrities and ideologically pliant or uncommitted NGOs to carry out relief work within or outside the public glare; completely other, for ideologically motivated opponents to challenge the RSS within civil society. Now in power, the RSS wants to monopolise seva, by criminalising or curtailing any competing claims to it within the social sphere.

Therefore, it is no surprise at all that the Modi government has left no stone unturned to make the functioning of civil society organisations next to impossible by the introduction of new FCRA amendments with provisions mandating reduction of administrative expenses and enhancing the power of the investigative agencies which tighten the authoritarian noose on the pretext of checking foreign funding; of course, meanwhile, international NGO’s affiliated to the RSS like Sewa International continue their work without any hassle.

This fits right in with its totalitarian vision of replacing and transforming a rights-bearing citizenry into a benign, clientelistic and obedient population, or as they would like to say – Patriotic Hindus.