Coup in Maharashtra: Let Us Celebrate the Quiet Burial of ‘New India’

National greatness can not be built by practitioners of sordid power grab. Fadnavis may be a winner in the short run, Narendra Modi is the real loser. 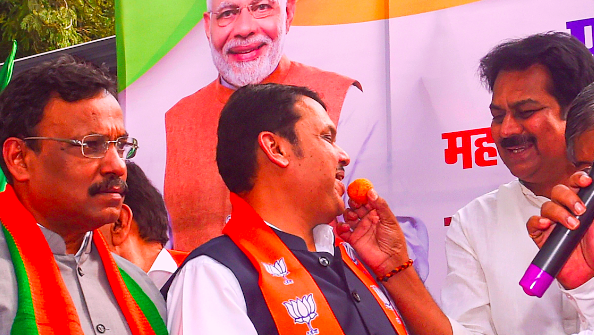 It will be easy, as also natural, to feel outraged at the constitutional travesty enacted at the governor’s house in Maharashtra this morning.

The birth of a new government should be a cheerful occasion but this was a joyless affair. Indeed, the Devendra Fadnavis-Ajit Pawar skulduggery can only be compared with the fraud of July 1984 when G.M. Shah was sworn in at midnight as chief minister of Jammu and Kashmir by governor Jagmohan.

But those were bad old days of an autocratic, authoritarian Indira Gandhi. And that should be a matter of some satisfaction to all  that the New India has finally begun to look very much like the soiled Old India.

It was promised that the New India would be host to ethical, open, transparent governance. That promise was spectacularly abandoned Saturday morning when a governor allowed himself to be satisfied that a new stable government could be formed by Fadnavis.

That the governor should be a party to discharging so important and so constitutionally critical a duty as swearing in a chief minister in an empty Raj Bhavan simply tells us one thing: there is nothing to choose between the governors of New India and those of Old India.

That the governors in New India can be as, if not more, indifferent to constitutional norms and procedures as they were in the ancien regime is perhaps the biggest eye-opener. An unintended consequence.

Thanks to the political chicanery on display in Mumbai today, the country stands educated that it is politics as usual in New India, as well. If it can be argued that there was something unnatural about the Shiv Sena-NCP-Congress concord, then the BJP-Ajit Pawar partnership definitely reeks of dishonour and deceit.

We were told that the proposed Shiv Sena-NCP-Congress arrangement was an insult to the voters’ mandate. Should the nation then rejoice that at last a way has been found to honour the sanctity of that mandate?

We need to remind ourselves that the prophets of New India and the high priests of clean politics had  deliberately, with characteristic aggression and venom, targeted the NCP during the Maharashtra election; the newly sworn-in deputy chief minister is embroiled in a number of cases instigated by the “agencies.” Now, that allegedly very corrupt man is being serenaded as a harbinger of “stability”.

Also read: As Fadnavis and Ajit Pawar Join Hands, Has the Irrigation Scam Charge Been Forgotten?

Indeed, a dry run was already undertaken in Haryana, when a man who had thoroughly abused the BJP, which in turn returned the compliment during the assembly poll, was hurriedly sworn in as deputy chief minister.

First a Dushyant Chautala, now Ajit Pawar stand recruited in the cause of New India.

This is not new but a very old and very familiar grammar of power politics. As a polity, we should be grateful that our new rulers have dropped all their pretences of being qualitatively different not only from the Congress or UPA crowd but also from the Vajpayee-Advani brand of ‘political decency.’

Our new rulers are busy telling us they are rough and tough guys, not all that enamoured of constitutional niceties and that their working motto is ‘my way or the highway.’ No one – neither a bhakt nor a critic – should have any confusion about them on this count.

Democratic India can take a certain vicarious pleasure that at long last the Modi regime has shed its pretences to a higher morality. It is pertinent to note that only a few days ago it was revealed how the BJP is the largest recipient of unaccounted money-anchored “electoral bonds.” The BJP has, unapologetically, coerced its way to become the richest political party. But coercion and morality do not go hand in hand.

Democratic India should, in fact, also celebrate the BJP’s re-incarnation as an old-fashioned cynical political outfit.

The ramifications of this constitutional subversion will be felt way beyond the Mumbai Raj Bhavan. All the institutional stake-holders in our governing arrangement will be drawing their inferences about the gathering waywardness at the heart of the Modi regime.

Most importantly, the judiciary, especially after the departure of Ranjan Gogoi as the Chief Justice of India, will have no reason to give the benefit of the doubt to the ruling regime.

As the authorised custodian of the Indian constitution, the apex court has been given more than a provocation to re-energise its role as the guardian of constitutional morals and manners.

The excesses in the Mumbai Raj Bhavan are bound to produce a modicum of equilibrium in the national scheme of things. We cannot be allowed to become  a banana republic.

Lastly, again, from Democratic India’s point of view, the biggest loser in Saturday’s underhandedness will be Prime Minister Narendra Modi. Here is a man who has convinced the nation that he – alone in India – puts national interest above party calculations.

Also read: In 10 Steps, Here’s How Modi and Shah Managed the Murder of Democracy in Maharashtra

On this basis of personal credibility, he has built a relationship of trust with the people of India. That trust stands betrayed. Any decent citizen is bound to wonder whether the heavens would have fallen if a Shiv Sena-NCP-Congress government had been allowed to take the oath of office in Maharashtra. Instead, the constitution was sabotaged and an illegitimate chief minister was sneaked in. All this on the prime minister’s watch.

Maharashtra will cast a shadow on the New Delhi cabal. The promise of a noble, selfless, dedicated ruler stands abandoned. The new virtuous prince has turned out to be a pale shadow of the haughty empress. It is tragic but it is also an occasion to celebrate.