Six Indian States Have Not Convicted Anyone for Corruption in 15 Years, Says Report

A study by Transparency International found that very few cases of corruption are registered in India, with even fewer convictions. 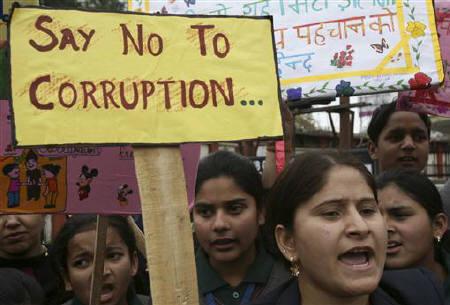 India ranks 76th among 168 countries surveyed by Transparency International, which studies how corrupt people think their governments are. The 2015 study used data collected on corruption in the country, which, however, remains poor and unreliable and dependent greatly on the state’s willingness to both maintain and share records.

Despite there being both collusive and coercive corruption at all levels, the data available with the National Crime Records Bureau from 2001 to 2015 shows that the number of cases registered for heinous crimes like murder, robbery and kidnapping actually exceeded the registered cases of corruption.

At a meet on ‘Fact and Fiction: Government’s Efforts to Combat Corruption’ organised by the Commonwealth Human Rights Initiative (CHRI) in New Delhi, several RTI activists spoke about how despite Prime Minister Narendra Modi’s repeated assertions of fighting corruption, few serious attempts appear to have been made to root out graft through basic benchmarking and implementation of legislations.

As Venkatesh Nayak of CHRI put it, “The data available with NHRC [National Human Rights Commission] over the years does not indicate the popular perception about corruption.” He said there is neither “certainty of punishment at the end of the process” nor do people feel confident about filing the complaints as a consequence of which “sunvai nahin hote” (there is no proper hearing).

Nayak pointed out that during the last 15 years “corruption cases did not even constitute 1 % of the total number of crimes registered in the country”. He said, “While the Indian Penal Code 1860 lists offences of bribery involving public servants and the offence of bribing voters during elections with prison terms of between three months and three years and, the Prevention of Corruption Act 1988 also covers all levels of government across the country except Jammu and Kashmir – which has its own special law against graft in Ranbir Penal code – very little information about the impact of these was available in the public domain in a consolidated manner.”

He said much of the information available now was thanks to the Centre’s initiative of 2012, formulating the National Data Sharing and Accessibility Policy. The Open Government Data Team of the National Informatics Centre created a digital platform for making these datasets widely available. CHRI was able to analyse to see how the states were penalising individuals who commit corruption-related offences and that they were able to compare incidences of corruption with major offences likes murder, kidnapping and robbery.

However, the analyses threw up several questions about the inadequacy of the data. It was revealed that in the 15 year period, a total of 54,139 cases of corruption were registered in the 29 states and seven union territories. But fewer cases were registered in bigger states like Uttar Pradesh (968) and Bihar (1,179) as against smaller ones like Kerala (2,464), Haryana (2,446) and Himachal Pradesh (1,080). Also, states with a higher population of tribals, despite their tribal-wealth related issues, posted fewer complaints. So while Chhattisgarh reported just 560 cases, Jharkhand was even lower at 509.

Among the northeastern states, Meghalaya reported just 15 cases, Tripura 28 and Manipur 32. But the big surprise was West Bengal which reported only 39 cases of corruption in 15 years. Surely the state which witnessed the Saradha chit fund scam would have had more?

With the number of cases of kidnapping being 11 times more than that of corruption cases and, the cases of murder being ten times more, while robbery was six times more –  it was quite evident that there was gross underreporting of corruption cases. “This comparison seems to indicate a severe lack of public confidence in the ability of the anti-corruption agencies to investigate a complaint of corruption, collect evidence and put the case up for trial,” said Nayak.

When it came to conviction, the national average stood at 35.33% for the cases put up for trial and 18.94% of those in which complaints were registered.

But as former chief information commissioner Wajahat Habibullah put it, the low conviction rate should not be used to “place too much relevance on the proportion of corruption” for as he put it, “while corruption is endemic in our system, often made up charges are levelled to settle political or bureaucratic vendetta”.

Speaking from personal experience as an IAS officer from Jammu and Kashmir, he said, “There were so many cases in the state which were just used to victimise honest officers.” Incidentally, the data also showed that 90% of those accused were acquitted in Jammu and Kashmir.

But as Nayak said, the malaise runs deep and this was reflected in the fact that despite several cases going to trial, no convictions were reported from West Bengal, Goa, Mizoram, Arunachal Pradesh, Tripura and Meghalaya –and only one case resulted in a conviction in Manipur in the 15 year period.

Anjali Bharadwaj of the Satark Nagrik Sangathan and the National Campaign For People’s Right to Information spoke about how convictions can be secured in cases of corruption. The amendment to the Prevention of Corruption Act, which is pending in parliament, is of grave importance. In its absence, she said the whole notion of accountability is being turned on its head. “We do not see any action to bring in any amendment or to operationalise existing legislations to fight graft,” she said.

Even when it came to the Act, she cautioned that those who give bribes should not be victimised as the amended law seeks to punish people for giving bribe. “So if someone gives a bribe to gets his child treated, he or she would become liable for punishment. It is being proposed that if the person voluntarily deposes that he had paid a bribe within a week of doing so, action would not be initiated. But who would actually be able to do so? There is no distinction in the new law between collusive and coercive bribe-giving”.

Her colleague Amrita Johri said Modi has only recently begun urging people to inform the government about black money. But, she said, the government has not acted on implementing the Whistleblowers Protection Act, which was legislated to provide protection to whistleblowers. “Nearly 50-60 people connected to the Vyapam scam died mysteriously and we have not operationalised the Act. Two new amendments were brought to it – through the Whistleblowers Protection (Amendment) Bill – but no one knows the status. The minister [of state in the prime minister’s office, Jitendra Singh] has stated that it was referred to a parliamentary committee, RTI has revealed that it was not true.”

Similarly, the Prevention of Corruption Amendment Bill is pending while the Prevention of Bribery of Foreign Public Servants Bill, Grievance Redress Bill and National Judicial Standards and Accountability Bill, all of which have lapses, need to be revived.

The RTI activists have demanded that key pieces of legislation be restored, operationalised or amended – as the need may be – to ensure that whistleblowers are protected so that the fight against corruption can be strengthened.