Even as the nation grapples with the coronavirus pandemic, the UP CM said the first stage of the “grand Ram Temple” was accomplished on Wednesday. 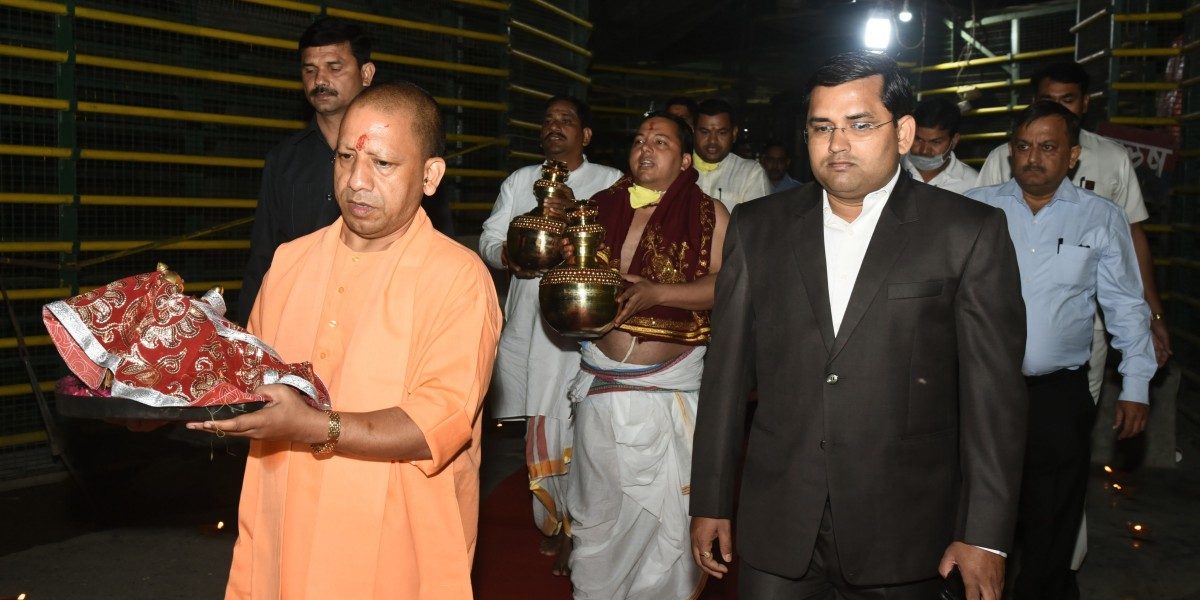 New Delhi: Even as India remained under an unprecedented lockdown on Wednesday in light of the coronavirus pandemic, Uttar Pradesh chief minister Yogi Adityanath attended a Ram Navami event in Ayodhya.

The BJP chief minister tweeted photographs of the event which he attended, saying that the first stage of the “grand Ram Temple” was accomplished and that the idol of Ram was placed at a temporary structure.

Ever since the viral coronavirus infection was classified as a pandemic, social distancing has been one of the key ways to minimise its spread. Last evening, Prime Minister Narendra Modi announced a 21-day national lockdown and ordered people to stay indoors. The guidelines also said religious congregations will not be permitted, while also banning religious functions.

While the religious event in itself is a violation of the Union home ministry guidelines for lockdown, the UP chief minister took the opportunity to make an appeal from the Ayodhya site to follow lockdown boundaries. Point 9 of MHA guidelines issued last evening clearly mentions, “All places of worship shall be closed for public. No religious congregations will be permitted, without any exception.”

Hours after a total lock down was announced by @narendramodi with no religious exemptions , @myogiadityanath , surrounded by atleast 20 people , in ayodhya this morning , made this appeal for everyone to ‘follow lock down boundaries’ !! UP is a parallel universe ! pic.twitter.com/6AqX2dMzec

The UP government has not come out clean on why the religious event that may not be a big gathering but was presided over by VHP men and priests was allowed.

In such circumstances, when Adityanath could have firmed up his administrative machinery to handle this human crisis, his casualness is striking.

Many have already pointed out that Adityanath threw caution to the wind and his presence at Ayodhya event may encourage more people to attend it. The initial plan for the event was to conduct a mega fair from March 25 to April 2, even as many expressed concerns of the virus spreading. However, amidst criticism that a large gathering at Ayodhya may ensure community transmission of the virus, the UP government had asked devotees not to gather at Ayodhya.

In a vaguely-worded order, Ayodhya’s district magistrate and superintendent of police said devotees would not be allowed to gather for the event. But it also declared that the Chaitra Ram Navami Mela would be organised between March 25 and April 2. 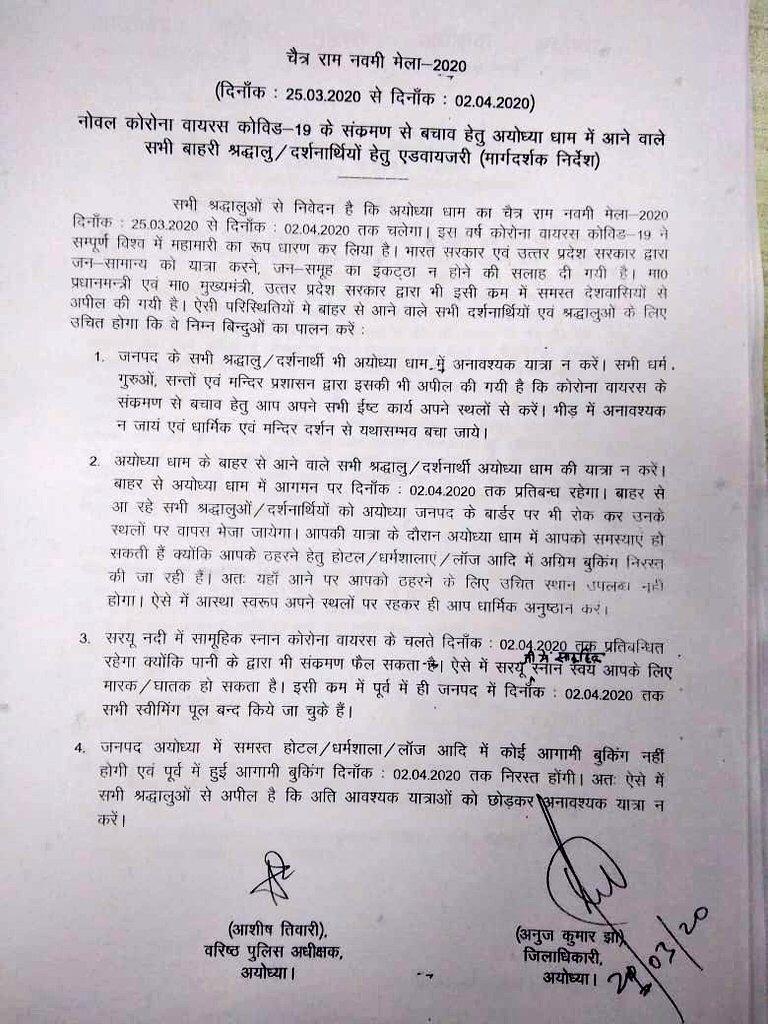 The order was generally understood as a cancellation of the mela. However, with Adityanath attending the inaugural day of the event, it is clear that the UP government had not cancelled the fair but had only prevented devotees from congregating at Ayodhya. While clear instructions have been issued to devotees from outside Ayodhya not to travel, it had only requested residents of the city to stay away from any “unnecessary travel” to the site.

Nevertheless, the chief minister’s presence at the event on the first day of lockdown may not reflect well on the UP government. UP, India’s most populous state, has a Herculean task at hand. Its public health infrastructure is among the most poorly-equipped in India. Moreover, several reports show that people of the state are still grappling with the unprecedented lockdown, and have been worrying about how to survive the next three weeks. The anxieties among the poor, who may have lost all incomes, is also reportedly soaring.

On Saturday, the Adityanath government announced that 35 lakh daily wage labourers in the state will get Rs 1,000 each as financial aid and also promised to provide free ration for one month to 1.65 crore construction workers. However, like elsewhere in the country, concerns about keeping the supply chain of essential commodities unbroken through the lockdown period remain.

His presence at the Ram Navami event may also mean that it will continue until April 2, even if it is with a small number of people. The UP government, despite the threat of the virus, had buckled under Vishwa Hindu Parishad’s pressure to grant permission for the mela. Since 2020’s Ram Navami was the first after the apex court gave a favourable judgement to the VHP, the event holds special significance to the organisation.

It remains to be seen whether Adityanath prioritises the health emergency over his politics or not.

In an unrelated event, a self-styled god woman, who calls herself “Maa Aadi Shakti” defied the lockdown and held a religious congregation at Deoria in Uttar Pradesh on Wednesday. In a video that has gone viral, she can be seen pointing a sword at police officers, daring them to remove her from the ashram.

According to reports, the police were able to control the situation after a lathicharge and arrested the woman. Around 100 people had gathered for the congregation.

A government spokesperson told news agency IANS that no one would be allowed to defy the lockdown and put the lives of people at risk.

A perspective on how tough it is for @Uppolice to enforce #21daylockdown. in Deoria , this self styled god woman ‘Maa Aadi Shakti’refused to call off a religious gathering , pointed sword at cops etc. Finally
it took a‘mild’lathicharge to disperse everyonepic.twitter.com/oQsZIFlLgl