Coronavirus Lockdown: The Seven and a Half Things that Modi Said and Did Not Say

A terse but timely message to stop indulging in profiling Muslims as ‘carriers’ of COVID-19 or as ‘bio-terrorists’ from the prime minister could have gone a long way in controlling the baser instincts of his followers. 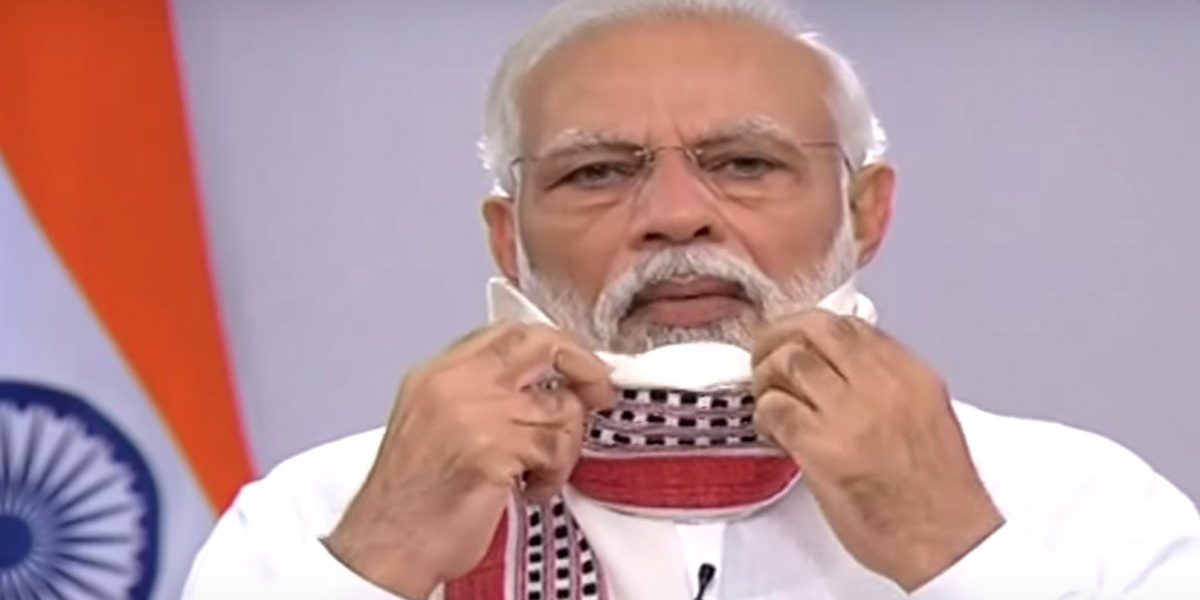 Prime Minister Narendra Modi takes off his mask during his fourth televised address on the novel coronavirus, on April 14, 2020. Photo: Doordarshan screengrab

Narendra Modi’s appearances on television in COVID-19 times bring with them apprehensions of the continued trotting out of mindless tasks like pot banging and candle-lit blackouts. But there was reason to believe his address on the morning of April 14 – which came on the day that the three-week lockdown announced by him was earlier scheduled to end – would have had something of substance. As it happens, it did not. In this 25 minute address, the most important thing he said was that the lockdown would now be extended till May 3. It takes roughly three seconds to say that. This is why it becomes necessary to break down what he said, or left unsaid, in the 1497 other seconds of time that he had at his disposal.

Modi began on an upbeat note, informing citizens that with their help, and under his direction, India had performed much better in comparison to other countries in combatting the COVID-19 pandemic. This was an upbeat message, but it wasn’t the truth. We have simply no way of knowing whether India is doing better or worse in terms of cure or containment of the COVID-19 disease, because there is no real testing programme underway to know the extent of the spread of the infection in the general population. Is the Government of India’s obstinate refusal to expand testing simply a measure designed at keeping bad news out of the public eye?

HIs second untruth consisted of telling people that his government had taken timely action to make sure the entry of people from countries where the virus had spread was restricted. In fact, temperature screening for people arriving from China (where COVID-19 began) were put in place on January 17, two months after the outbreak of the disease in Wuhan, and a ban on arrivals introduced in the first week of February.

Travel restrictions from four other countries – Italy (which at that point of time had the second highest number of COVID 19 cases in the world), Iran, Korea and Kapan – were put in place only on March 3, and from other countries on March 13.

A March 9 report in the Business Standard stated that Delhi airport had two thermal scanners and 33 temperature measuring devices, and Mumbai airport had 25 infrared thermometers. No airport in the country had adequate deployment of doctors or medical staff for tests. Many reports indicated that quarantine facilities, where they did exist close to international airports, were abysmal and arbitrary, often insanitary and unhealthy.

The Government of India, contrary to Modi’s claim, was clearly not prepared. Precious time and resources were wasted on making arrangements for Trump’s visit in the fourth week of February. Ruling party leaders were stoking communal passions in Delhi at the end of February, and until the third week of March, the BJP as a party and key ministers were more engaged in toppling an elected government in Madhya Pradesh than they were in thinking about a pandemic. The government that they managed to cobble together in Madhya Pradesh still does not have a health minister.

Two days after the WHO declared COVID-19 a global pandemic on March 11,  the Union health ministry  put out a confident statement that the disease was not going to be a cause for a national public health emergency in India. This breezy confidence, which was also evident in the health minister, Dr. Harsh Vardhan’s speech in Parliament on February 10, extended to claims about the availability of PPE kits and other essential equipment and supplies that we now know were clearly untenable.

In fact,  the Protective Ware Manufacturers Association of India sent letters asking for guidance for the production of PPE kits and masks to the Health Ministry in early February. We also know that these letters went unanswered. We further know that the orders for the production and procurement of PPE kits by the concerned Ministries (Health and Textiles) were not in place till March 24. Flip Flops on export controls over export of essential drugs (in response to Donald Trump’s threats of ‘retaliation’ if India did not release Hydroxychloroquine stocks to US demand) have been the norm rather than the exception.

To call all of this ‘timely and prompt action’ would hardly be accurate.

Now let’s deal with the rest of what Modi said. He said seven things. Seven banalities that constituted the anti-climax of his 25 minute address. If Hannah Arendt had known of Narendra Modi she would have had to think not just about the ‘banality of evil’ but also about the ‘evil of banality’.

Out of the seven steps recommended by Modi, six are things that you don’t really need a prime minister to tell you about. Five of these six things are actions and attitudes that any sensible human being would undertake in a situation like this.

They are as follows: ‘care for elders’, ‘wear masks and stay at home’, ‘think about poor families’, ‘do not terminate the services of workers’ and ‘respect doctors, nurses and people who clean’.

The sixth – ‘boost immunity by taking hot drinks’ – is an unproven measure, despite the prime minister or the health ministry’s endorsement. Taking hot drinks at a time like this can probably do no harm, but it certainly won’t do much good either.

Not one of these six specifies what the government is doing, intends to do, or is capable of doing. Prime ministers are elected to do the job of telling citizens what a government is doing or planning to do, not to tell citizens to be nice to the elderly and drink hot drinks.

Only one of the seven steps has a concrete dimension, and that is step four – the command to download an intensely invasive surveillance application, the ‘Aarogyasetu App’, so that the state can achieve a tighter degree of  control over citizens lives, movements  and actions. That was the real point of the ‘Seven Steps’ or ‘Saptapadi’. The rest was sugar coating.

In addition, Modi announced a period of intense scrutiny of ‘Lockdown Violations’ till April 21 and encouraged vigilantism to enforce the lockdown. All of this helps us zero in on the real message in Modi’s speech, which was to tacitly encourage vigilantism and snitching on ‘lockdown violators’ within a given deadline (of April 21), and of building consensus for the voluntary usage (by citizens) of an app for the state’s surveillance of citizens. This is what he really wanted us to hear.

1. Utilisation of existing food stocks for people in food distress

2. Expansion of testing (India has abysmally low testing even now).

3. Procurement of PPE kits, ventilators and other essential equipment

4. Security of employment for people in contracted and casual forms of work, or, immediate monetary and material compensation in situations of distress.

5. Safe and humane transport for migrant workers to their homes wherever possible and necessary.

7. Anything about how the post lockdown industrial and economic recovery can be thought through.

Let’s spend some time talking about just one of these seven things, although each one of them deserves extended discussion.

Modi did not say one word about, or against, the baseless and evil stigmatisation of sections of the population (Muslims, people from North East India) as well as of people who have unfortunately contracted the disease, that his followers are resorting to in alarming ways as their response to COVID-19.

His silence means that he is tacitly endorsing the informal apartheid and violence that his followers are adopting with regard to Muslims. In Facebook pages, and in countless WhatsApp groups, people who sport titles like ‘We Support Narendra Modi’  punctuate their Jai Shree Ram’s, pop quizzes on Modi’s childhood and proclamations of war on China, with hatred against Muslims, and increasing calls to boycott Muslim businesses and vendors. These amplify the hatred that is already spewed on mainstream TV channels by Modintoxicated anchors.

A terse but timely message to stop indulging in profiling Muslims as ‘carriers’ of COVID-19 or as ‘bio-terrorists’ from the prime minister could have gone a long way in controlling the baser instincts of his followers. But the fact that he chose not to do so means that he is signalling to his troops that they can continue to look for scapegoats, and can continue to humiliate their fellow citizens in the name of undertaking ‘patriotic’ duties as ‘Corona Warriors’.

This is the way that a consensus designed to normalise totalitarian measures that should be unacceptable in any democratic society is being set in motion. Modi took 25 minutes of all our time to send out this message. He did this in the name of the working poor, while invoking the memory of Dr. Ambedkar, because April 14 was his birth anniversary. There can be no greater insult to the legacy of Ambedkar’s reasoned and ethical legacy. We will remember this day as one of betrayal, and as a sign of things to come.

Shuddhabhrata Sengupta is with the Raqs Collective in New Delhi