Congress May Not Be Winning UP, But Rahul, Priyanka Gandhi Have Galvanised the Opposition

The two Congress leaders have made it a point to go after the Adityanath government for all its perceived failures, particularly after the Lakhimpur Kheri violence. 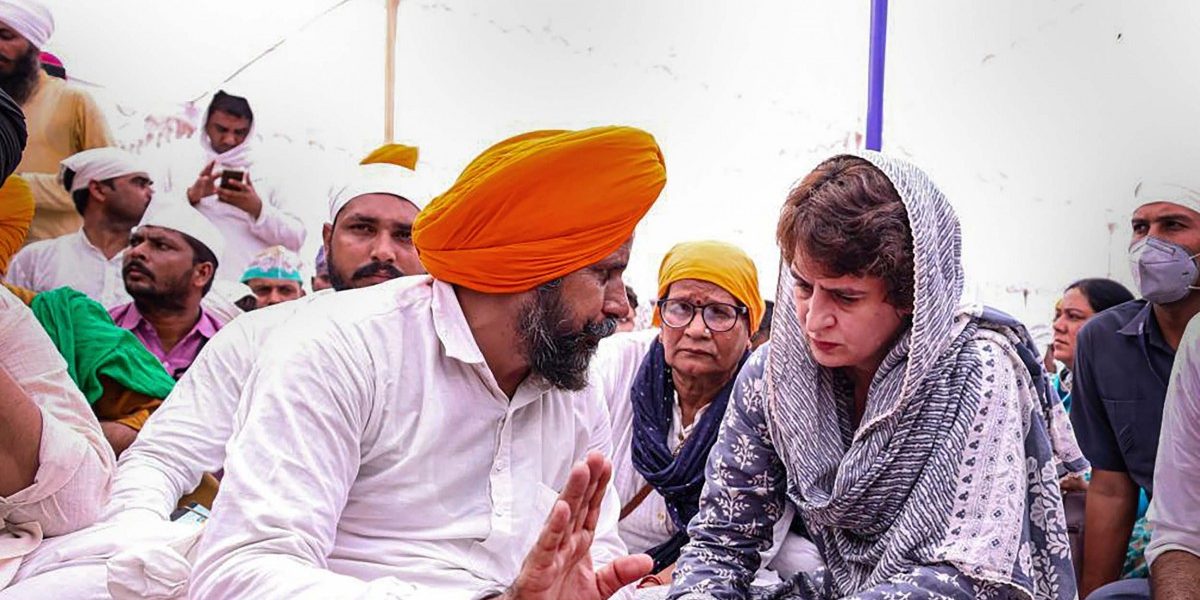 New Delhi: The political rage that Priyanka Gandhi Vadra and Rahul Gandhi have shown against the Adityanath-led Uttar Pradesh government over the Lakhimpur Kheri killings has reignited the crucial question of whether the Congress party will be able to galvanise a sizeable section of voters in the state. For over two years, Priyanka, ably supported by Pradesh Congress Committee (PCC) president Ajay Kumar Lallu, has been looking to find a foothold in UP. However, most observers believe that the party’s consistent efforts haven’t quite translated into any serious political gains.

Party men and women in the UP Congress believe that the party needs to keep up its momentum as a long-term strategy to acquire any kind of electoral weight in the state, which is otherwise dominated by identity-based parties on one hand, and the Hindu nationalist Bharatiya Janata Party on the other.

To be sure, the Congress is attempting to go beyond immediate identities and give an alternative pro-poor development vision in the state. Both Priyanka and Rahul have consistently been addressing the concerns of minority groups, which feel pushed to the wall under the hardline Adityanath regime, and various non-dominant Dalit and OBC groups.

However, to get these groups completely on its side would require a massive political effort over a long period of time, and perhaps that is the reason most Congress activists talk about its so-called “long-term” strategy in the state. In other words, the party itself does not hope of making substantial gains in the upcoming assembly elections, and is looking to cement itself by forging an alliance with a dominant opposition party. Its best bet would be a pre-poll arrangement with the Samajwadi Party, which currently is looking like the strongest opposition party.

Also read: BJP Has No Credibility Left, Arrogance Will Bring Them Down: Akhilesh Yadav

In Uttar Pradesh, negotiations between political parties and different caste and community groups ahead of assembly polls are historically as important as an organisation’s ability to project itself as a formidable option for voters. Both the Samajwadi Party and Bahujan Samaj Party have been adept at handling these intricate equations. On the other hand, the Congress has been on a weak wicket in the state for years. Under Priyanka’s leadership, however, it has definitely shown a will to reclaim its space with a surefooted strategy of consolidating a substantial section of so-called lower caste groups. 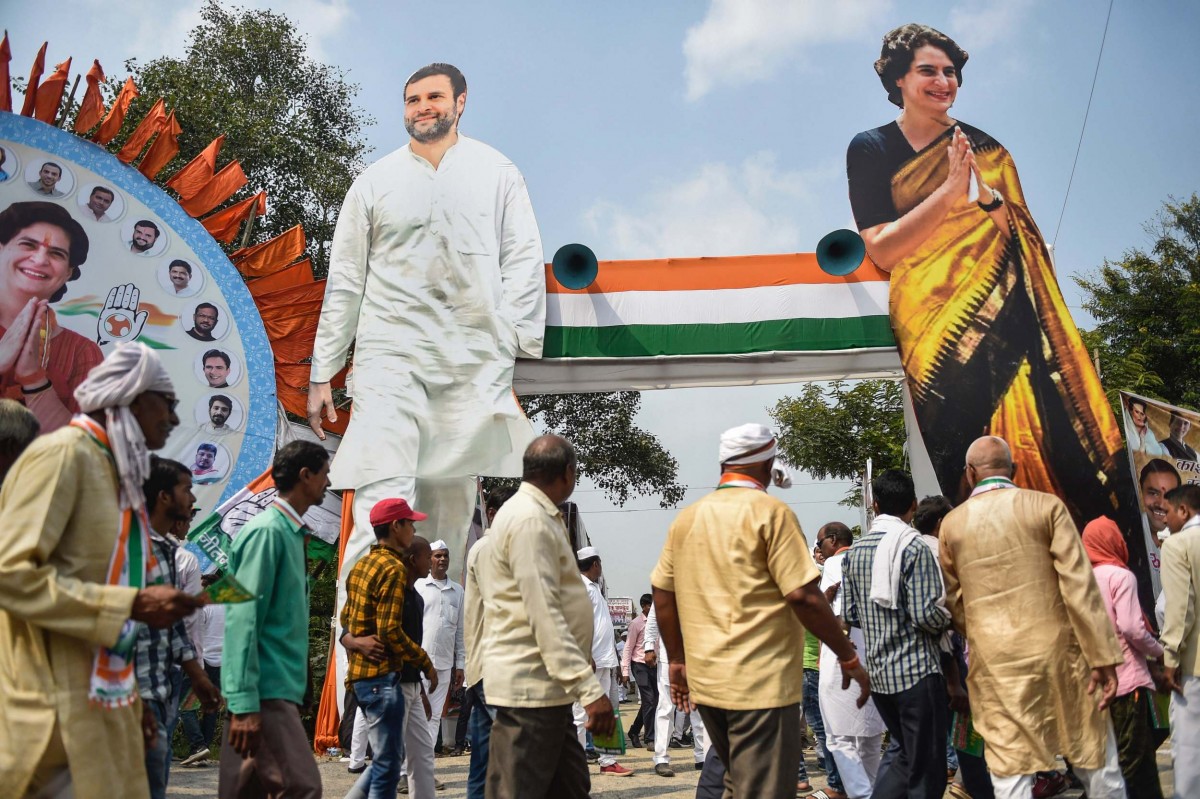 Larger than life cut-outs of Congress leaders Rahul Gandhi and Priyanka Gandhi during the Kisan Nyay rally, ahead of UP Assembly Elections 2022, in Varanasi, Sunday, Oct. 10, 2021. Photo: PTI/Ravi Choudhary

Notwithstanding the electoral equations, the Congress has not only been able to strongly attack the Adityanath’s government apparent mishandling of the pandemic but has also raised pertinent issues like the growing unemployment rate, agrarian crisis, price rise and failing small and medium scale industries. At the same time, it has hogged attention by militantly highlighting the excesses of the state police in infamous incidents like the Hathras gangrape, Manish Gupta’s alleged murder by police personnel in Gorakhpur or the fake encounter case of gangster Vikas Dubey. Most recently, both Priyanka and Rahul showed the way for the opposition by mounting a determined protest against UP government’s diktat prohibiting opposition leaders from visiting the kin of those killed in Lakhimpur Kheri.

As the Congress face in UP, Priyanka has been particularly prompt in responding to Adityanath’s frequent jibes against her and opposition leaders. For instance, Priyanka turned the chief minister’s most recent taunt into an advantage. Soon after a video showing her sweeping the floor in Sitapur where she was in custody for attempting to visit Lakhimpur Kheri, the chief minister in a rather casteist dig at her said, “Janta unko isi layak banana chahti hai.” Instead of letting it pass, Priyanka went to a Valmiki-dominated locality Indira Nagar in Lucknow and picked up a broom for another photo event, while accusing BJP leaders of being disrespectful towards sanitation workers.

Days later, she launched a political campaign on Lakhimpur Kheri in Prime Minister Narendra Modi’s constituency Varanasi in a well-attended gathering. The campaign is crucial in the sense that farmers’ protests haven’t quite reached eastern parts of Uttar Pradesh in the way they have captured people’s imagination on the western side.

Also read: It Is G2 Versus 2G…or Four Against a Billion

Earlier, the brother-sister duo made a concerted attempt to corner the Adityanath government’s decision to prevent opposition leaders from visiting Lakhimpur Kheri in the aftermath of the farmers’ killings. While Priyanka’s bold protests while in custody in Sitapur were reported almost daily, Rahul addressed a press briefing to defy the UP government’s order when he announced his plan to visit Lakhimpur Kheri. Such was the pressure on the state government that it immediately withdrew its unofficial ban and allowed the Congress leaders to visit the families of dead farmers.

The Congress’s bold and timely opposition to Adityanath has undoubtedly enthused the opposition ranks. While Priyanka hasn’t stopped campaigning over the Lakhimpur issue, Samajwadi Party chief Akhilesh Yadav too kick-started the Vijay Rath Yatra (Victory March) with the slogan “Mission 2022” on October 13. The opposition momentum is such that Akhilesh’s march was widely covered in the regional media, even while Modi’s recent event at Lucknow in which he announced multiple development projects failed to make an impact in the aftermath of Lakhimpur killings.

The opposition voices centre around incidents focusing on Adityanath’s apparent failures on social, economic and governance fronts. At this level, the opposition has scored over the BJP, which has failed to put the spotlight on Modi’s first political rally in Kushinagar ahead of the 2022 assembly polls on October 20.

Much of the credit for fuelling the palpable anti-incumbency sentiment at the moment will go to the Congress. While the opposition leaders have raised the brazen killing of protesting farmers with aggression, they have also successfully managed to send across the message that the state government may be shielding the high-profile accused in the case – the son of the junior home minister in the Union government.

The Congress may not be in a leading position but its recent campaigns have surely rejuvenated opposition ranks. The Samajwadi Party, which is currently the strongest in terms of organisational strength, a concrete voter base and caste and community networks, may become the biggest beneficiary in the elections in terms of consolidating anti-incumbency votes. A small part of its gains, however, will also be because of the grand-old party’s momentous efforts.