The party's former Punjab unit president said he was finding it difficult to get along with a few of his colleagues because of their "short-sightedness and insecurities".

Chandigarh: A day after the Congress announced Charanjit Singh Channi its chief ministerial candidate for the upcoming Punjab polls on February 20, the party’s former state unit chief and prominent Hindu leader Sunil Jakhar announced he was quitting active politics and would not contest in the elections.

Though he will remain with the Congress, Jakhar’s decision, days ahead of the assembly elections on February 20, indicates that unity is still elusive for the party. Earlier, Channi and current state unit chief Navjot Singh Sidhu had been competing for the CM post.

Speaking to The Wire, Jakhar clarified that his decision to quit active politics had nothing to do with the party not considering him as a chief ministerial candidate. He, instead, said that Channi’s nomination was a historic moment.

Among Punjab’s politicians, Jakhar is seen as someone who understands the state and carries a clean image.

He also said he does not want to harm the Congress party and the opposition’s reaction – asking why a Hindu cannot become the CM of Punjab – are “bad politics”. Jakhar said these attempts are opportunistic, adding that Punjabi society is secular and will not be influenced by the opposition’s comments.

Speaking about his decision to leave electoral politics, the Congress leader said it was “getting difficult” for him to get along with a few of his colleagues because of their “short-sightedness and insecurities”. These qualities, he said, became visible when the party was searching for a candidate to replace Amarinder Singh in September last year.

Jakhar recently stirred the pot when he said that he was hurt for being rejected from the chief ministerial candidate race because he was a Hindu, not Sikh. He claimed that the party denied him the opportunity despite maximum MLAs voting in his favour. 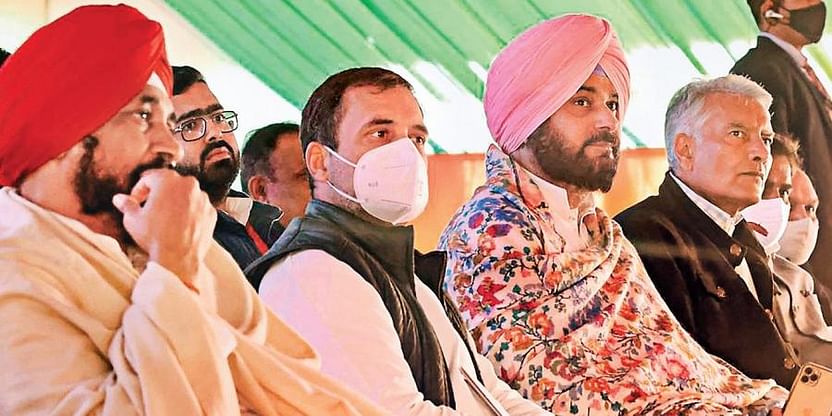 Jakhar told The Wire that the spark was lit by senior party leader Ambika Soni – who rejected the post and said a Sikh should become the CM.

He said that many of his colleagues, whose names he did not reveal, claimed that “all hell will break loose” in the state if he was made chief minister. “If I have colleagues who are holding senior positions in Punjab Congress and have this kind of small mindset, it is difficult for me to work with them,” he said.

“Instead of being at loggerheads with them and embarrassing the party, it is better for me to step aside,” he added.

Jakhar was, however, quick to clarify that this was not the ideology of either the Congress party or Rahul Gandhi.

Punjab, Jakhar said, never made him conscious about his religious identity or made to feel like a second-class citizen.

He said only a few insecure leaders created an unnecessary issue with their petty thinking regarding religion and identity politics – which did not exist in the psyche of Punjab or its political domain.

“People may say that Channi was made the chief minister because he is Dalit. But Rahulji never said this. The fact is that he has empowered a poor person, extending his recent vision for India when he recently said in parliament that two types of India exist today: one that is poor and the other that is rich,” he said.

Jakhar added, “If it is assumed as per popular perception that only Jat Sikhs became chief ministers here in the past, even then Rahul Gandhi broke the glass ceiling by making a Dalit Sikh a chief minister for the first time. That was a revolutionary step.”

However, few people in the Congress created another glass ceiling by saying that a Hindu cannot become a chief minister in Punjab, he said. “It was an insult to Punjab and Punjabiyat. It is not how people of Punjab or the Congress party think. Rahul Gandhi is the most secular person I have met in the last 20 years of my political career,” he added.

Also read: With Channi as Punjab CM Face, Will Congress Consolidate the Votes It Is Hoping For?

Jakhar was recently made chairman of the poll campaign committee but Sidhu’s behaviour and Channi’s elevation appeared to have made his role redundant.

He recently passed on the baton of his constituency to his nephew, thinking that he need not be insecure as the party would take care of him.

“But the recent turn of events may have incensed him,” said a person closer to his coterie.

He has also been eyeing a role at the national level for a while now, a transition that his father Balram Jakhar – a close confidante of the Gandhi family – too had made. The senior Jakhar was elected as an MLA before becoming an MP. He was the speaker of the Lok Sabha and later a Union minister.

But the Congress does not have any role for Sunil Jakhar at the national level and may need a creative solution to resolve his issues, sources said.

Sunil Jakhar’s journey into electoral politics began in 2002, when he won hi family stronghold of Abohar. He was elected from the seat thrice times between 2002 and 2012, although he faced a string of electoral losses in parliamentary polls. In 2017, he won the Gurdaspur Lok Sabha bypoll, which was held in the wake of actor Vinod Khanna’s death. He later lost the seat to actor Sunny Deol in the 2019 Lok Sabha elections.