Modi quoted remarks he claims were made by Manmohan Singh, even though the PMO under Singh had specifically clarified that his statements were being misconstrued. 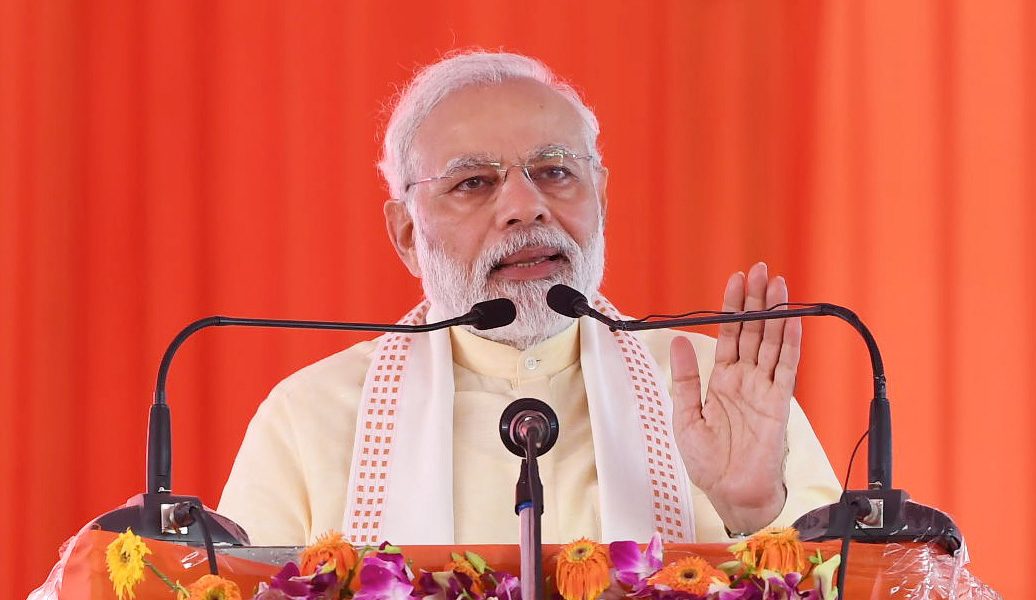 New Delhi: Demanding that Prime Minister Narendra Modi apologise for calling it a party for Muslim men, the Congress party has said that the remark showed the Prime Minister’s “sick mentality”.

Terming the prime minister a “peddler of untruths”, the Congress challenged him to discuss his allegations against the opposition party in parliament during the monsoon session beginning July 18.

Modi, during his speech in Azamgarh yesterday, quoted Rahul Gandhi as saying that he wanted practices like triple talaq to continue – though the Congress president has denied having made any such statement.

“I have read in newspapers that Congress naamdar [dynast] has said that the Congress is a party of Muslims,” Modi said, according to Indian Express. “This debate has been on for the last two days. I am not surprised because during the Manmohan Singh government, the prime minister himself that said that Muslims have the first claim on the country’s resources…”

This is not the first time Modi has talked about Singh’s alleged remarks on ‘first claim on resources’ – he first raised them when Singh was prime minister. At the time, the PMO had specially released a statement clarifying that Singh’s remarks were being misconstrued. However, that has not stopped Modi from bringing them up again.

“The prime minister has continuously hurt the dignity of his office. We strictly oppose what he said yesterday. It shows his sick mentality and twisted mindset,” senior Congress spokesperson Anand Sharma said.

“There is an attempt by him to divide society… His main opposition, the INC, led the national movement, spearheaded the fight for independence… to call it a Muslim party does not behove a PM. He should apologise for his statement. His sick mindset is an issue of national concern. The prime minister gives out statements which are wrong as per history and facts and he should apologise for the same,” Sharma said.

The Congress appeals to the prime minister to desist from making “false” statements, he added.

Sharma said Modi was the prime minister of the entire country and not only of the BJP. He also said Modi had “less knowledge of history and writes his own history”.

Sharma also said that while the Congress was against triple talaq, his party wanted to follow the rules of the parliamentary system. “This government has tried time and again to bypass parliament. They want to get bills approved without the scrutiny of parliament,” he alleged.

The Congress leader said many bills are sent to different committees to ensure that there are no mistakes in formulating laws and questioned how such a process can mean a disruption in the process of legislating.

The prime minister had said the opposition was stonewalling the government’s efforts to secure the life of women, especially Muslim women. The triple talaq Bill has been passed in the Lower House, but remains pending in the Rajya Sabha amid opposition reservations over it.

Replying to a question, Sharma said, “Since when has Modi become the protector of women? The state (Uttar Pradesh) in which he was speaking is witnessing rapes daily. Even yesterday when he was giving the speech, a woman was gangraped in a temple and burnt alive. What action has he taken?”

He said parliament enjoys certain privileges and the Congress will demand answers from the prime minister in the House for making wrong statements.

“The Congress does not need certification of nationalism from somebody who are the descendants of not only non-participants of the freedom movement but also active collaborators of the British,” he said.

Delhi chief minister and AAP convener Arvind Kejriwal today said the BJP government at the Centre had achieved nothing if Modi was talking about the “Hindu-Muslim” issue after four years in office.

“If Modi is talking about Hindu-Muslims even after four years, it means his government has achieved nothing,” Kejriwal said at the Aam Aadmi Party’s state-level convention.

The Delhi chief minister asked the prime minister if talking about Hindus and Muslims would help India become the number one country in the world.

Modi was harping on the Hindu-Muslim issue when the US was talking about nanotechnology, and Japan, France and England were pursuing “big technologies”, Kejriwal said.

The Delhi chief minister said that education alone would make India “number one” and alleged that no government at the Centre had worked earnestly for the education sector in the last 70 years. “Indians are the wisest people in the world. But due to dirty politics, a large number of people are being intentionally kept illiterate,” he claimed.