The Congress had recently removed Tanwar as state party president and allowed Hooda to have a big say in the distribution of tickets. 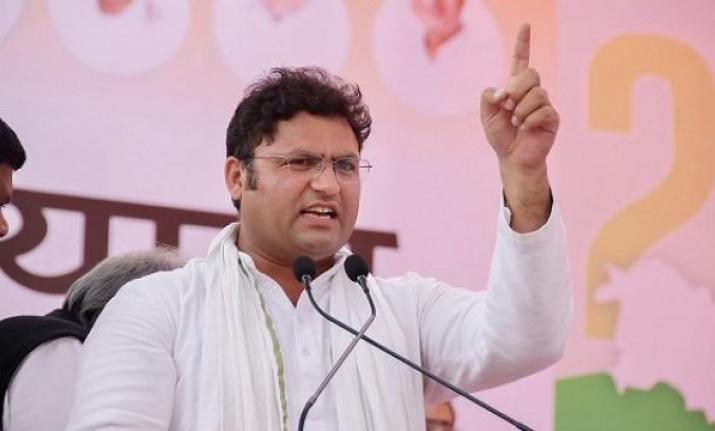 New Delhi: In a major jolt to the Congress in Haryana ahead of the assembly elections, former state unit president Ashok Tanwar today resigned from the primary membership of the party saying it was going through an “existential crisis” and was faced with “serious internal contradictions”.

A couple of days ago, Tanwar had also stepped down from all the poll committee while accusing former chief minister Bhupinder Singh Hooda of hijacking the distribution of tickets for the elections.

Resignation comes after last date of filing of nominations

Tanwar made his decision to leave the party known through a tweet in which he also posted a four-page resignation letter marked to interim Congress president Sonia Gandhi. The timing of Tanwar’s letter is crucial for the last date of filing nominations is over and it is clear that he did not intend to either contest as a rebel himself or wanted to promote rebellion within the ranks but wanted to raise an issue in the interest of the Congress at large.

In the letter, he wrote that “today, the Indian National Congress is going through an existential crisis, not because of its political opponents, but because of serious internal contradictions.”

‘Congressmen from non-political families not valued’

He further stated that “hard working Congressmen who rise from the grassroots and belong to non-political and humble family backgrounds are not valued.”

Tanwar, who joined the party at a tender age of 17 and rose up the ranks to become the Pradesh Congress Committee president, also charged that “money, blackmail and pressure tactics seem to work at the end.”

Fight with Hooda behind resignation

Though he did not name Hooda, it was clear who he was referring to because in August the former CM, who had a running tiff with Tanwar, had threatened at a rally in Rohtak to leave the party if he or his supporters were ignored in distribution of tickets for the Assembly polls. He had also met Sonia Gandhi in the presence of general secretary in-charge of state Ghulam Nabi Azad. Soonafter, the Congress had replaced Tanwar with Rajya Sabha MP Kumari Selja as state president of the party.

This had irked Tanwar and he had repeatedly threatened to pay back Hooda in the same coin while campaigning for the polls. As he and his supporters were not picked as candidates in most of dozen-odd seats in and around Sirsa, where he wields considerable influence, Tanwar had quit from all the poll committees. He had also accused the leader of allowing the state unit to become “Hooda Congress” and alleged that money had changed hands for tickets.

Despite that Congress retained Tanwar as one if its star campaigners for the state. However, this was no consolation for the young leader who decided to make his angst known through his resignation letter.

In the letter to Ms. Gandhi, he wrote that “now the Congress is the anti-thesis of democracy, plagued by feudal attitudes and medieval conspiracies.”

Giving a large picture, he added: “I am not the only victim of these prejudices that are aimed at defending dynastic politics, which is so deep rooted and omnipresent in Congress party. The victims are each one of us millions of soldiers who gave their sweat, blood and lives for realising the spirit of our great freedom struggle and ideals of our founding fathers …. Congress visibly has drifted away from its basic principles and ideology.”

Coming to what drove him to the decision, Tanwar wrote, “my experience of last few yers has been that internal democracy in the party is being killed by selfish interest of a few lobbies. Devoted people like me are not allowed to work with full freedom. Obstacles are created every day, at every stage to weaken those who are given responsibilities…. “

Tanwar, who owes a great deal of his rise in the party to former president Rahul Gandhi, also claimed that “in the last few years numerous conspiracies are being hatched to eliminate those young leaders who have been groomed by Shri Rahul Gandhi in last one and a half decade. Unfortunately most victims of this conspiracy may not have the courage to stand up …. “

In fact, his words bear a lot of weight considering that in the recent past the Congress has backed its old warhorses everywhere over the young brigade. Be it Kamal Nath ahead of Jyotiraditya Scindia in Madhya Pradesh; Ashok Gehlot over Sachin Pilot in Rajasthan; or Virbhadra Singh in Uttarakhand, Amarinder Singh in Punjab or Harish Rawat in Uttarakhand, the party had stood firmly with its senior leaders.

`No one punished for physical assault, caste politics at play’

In the case of Haryana, Tanwar also stated that it has been the “epitome of this conspiracy to destroy the Congress”. He wrote that while the party was know as one of “all 36 communities”, there have been “strange attempts of social engineering by some influential people” which made Congress list its credibility of being the party of all communities.

Apart from repeated attempts to deny him party tickets for various polls, Tanwar also raised the issue of “instances of abuse and physical violence” against him – especially in Aprile 2015 nd then it September 2015 during All India Congress Committee rallies in Delhi. He charged that after he was attacked by the Personal Security Officer of Hooda and his supporters, the Shinde Committee was constituted to inquire into the matter but no action was taken against anyone.

Tanwar also ridiculed some central party leaders saying “the decision makers at AICC can’t win an election themselves, while the soldiers on ground who stay in touch with the masses are neglected.”

‘Punished despite ensuring growth of support for party’

Yet, he said, he and CLP leader Kiran Chaudhary were “removed unceremoniously” and when it came to distribution of tickets, “personal allegiances and fixing” with Hooda, Azad and others proved to be the “top criteria”.

As such, Tanwar said he would like to resign after serving the party for 26 years. “My fight is not personal but against the system which is destroying the grand old party,” he said.