The party also accused the Centre of being a “mute spectator” to violence in the city and held the Aam Aadmi Party “equally responsible” for the situation.

New Delhi: A delegation of Congress leaders, led by interim president Sonia Gandhi and former Prime Minister Manmohan Singh, on Thursday met President Ram Nath Kovind at the Rashtrapati Bhawan and urged him to remove Amit Shah as the Union home minister for ‘failing to prevent the violence’ that has gripped the national capital since Sunday. In a subtle reference to former PM Atal Bihari Vajpayee’s rebuke to Narendra Modi for failing to fulfil his ‘raj dharm’ after the 2002 Gujarat riots, Congress leaders urged the President now to fulfil his ‘raj dharm’ while dealing with the situation.

Following the meeting, Gandhi read out from the memorandum. It accused the Centre of remaining a “mute spectator” as violence in the city unfolded and left at least 34 people dead and several injured. Accusing Shah of abdicating his responsibility as home minister, the party urged the president to immediately call for his removal.

“We call upon you (President) to ensure that life, liberty and property of citizens are preserved. We also reiterate that you should immediately call for the removal of the home minister for his inability to contain violence,” Gandhi said. She also added that the president had assured the delegation that its demands would be looked into.

Manmohan Singh said the party informed the president that the violence reflected a “total failure” of the Centre to deal with the situation. “We called upon the president to suggest to him that what has happened in the last four days in Delhi is a matter of great concern and a matter of national shame in which at least 34 people have died and 200 people are injured, it is a reflection of the total failure of the central government,” he said. 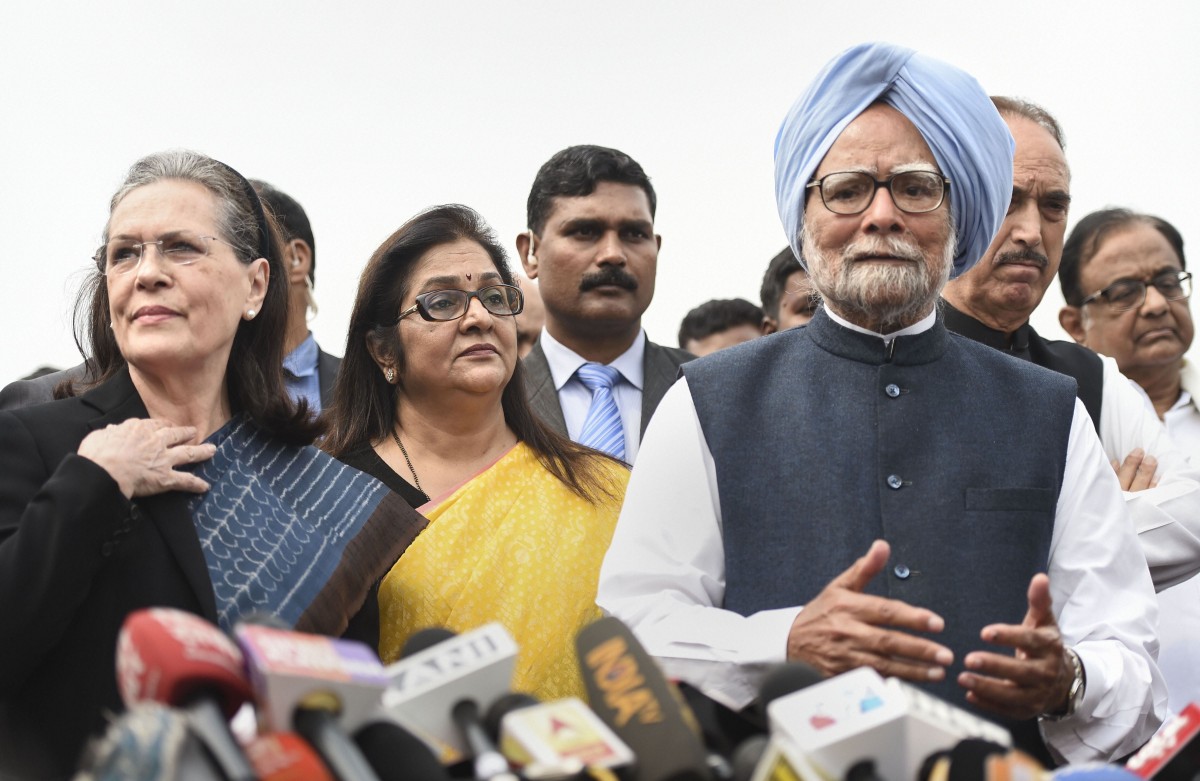 Yesterday as well, Sonia Gandhi had blamed Shah for the violence in the city and sought his resignation. She claimed that there was a “history, design and pattern” behind the violence in Delhi, which many have equated to the 2002 Gujarat pogrom and also the 1984 anti-Sikh violence.

The Congress has also accused the Aam Aadmi Party government in Delhi, which dislodged it in the city following the 2013 assembly elections, for being “equally responsible” for the situation.

While accusing several BJP leader of making “inflammatory statements intended to create an atmosphere of fear and hate,” Sonia Gandhi had also blamed the Arvind Kejriwal government and the Centre for their “collective failure” to prevent violence. She insisted that the chief minister had an obligation to be visible in the affected areas and in constant communication with the people.

The Congress Working Committee had also issued a resolution on Wednesday which stated that “the CWC is of the firm opinion that what has happened in Delhi is a colossal failure of duty for which the entire responsibility must be borne by the Central government, particularly the Home Minister, and calls upon the Home Minister to tender his resignation immediately.”

Congress to reaches out to victims

Meanwhile, in keeping with Sonia Gandhi’s call to all her party leaders to reach out to victims of violence and their families in the affected areas, the Delhi Congress has started urging its leaders in East Delhi and North East Delhi to make all efforts to normalise the situation.

Speaking to The Wire, its spokesperson Mukesh Sharma said all former and present councillors, office bearers, legislators and other leaders of the party from the two districts had either started or would start visiting affected people and provide them with essential help. “We will assess their losses and see how best we can assist them. Our fear is that the loss of life and property from the violence is much more than what has come out so far,” he said.