The party will need to move beyond the dysfunctional Gandhis if it wants to preserve its centrality in our republic. 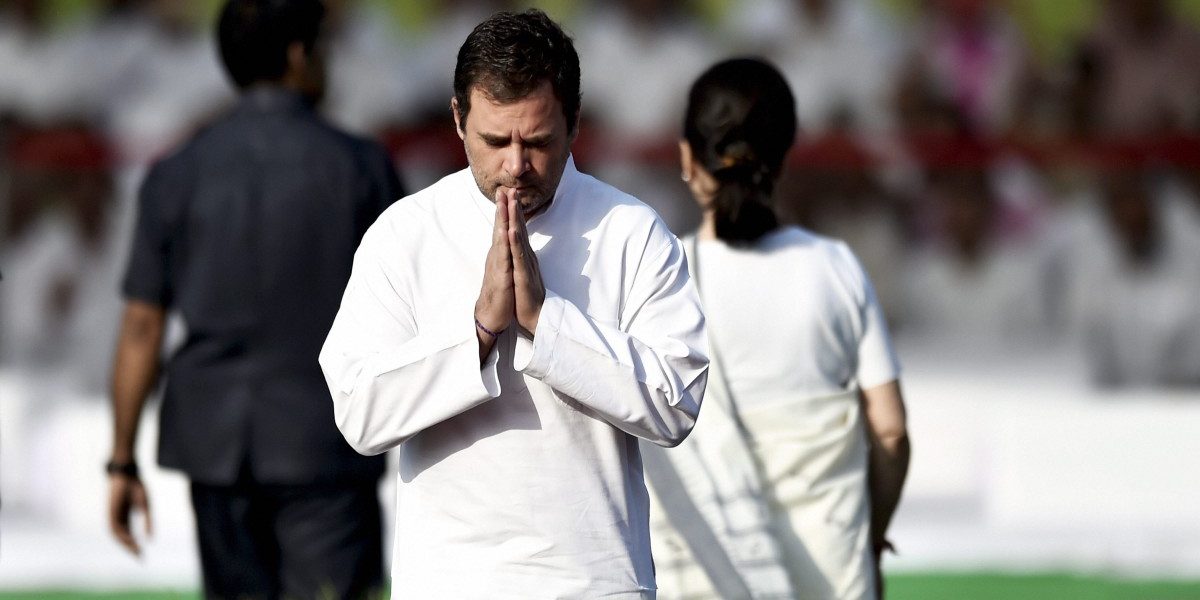 The members of the Congress ought to be grateful to Rahul Gandhi for providing them with a historic opportunity to debate the party’s fundamentals, its ideology and its established procedures and protocols. A comprehensive and successive defeat in a national poll is good enough to induce Congressmen to remind themselves that a political party is much more than an election machine.

Rahul’s resignation provides the party with a much-needed occasion to recover the depth of the Congress brand as the principal party that has always stood for unity, integrity, security, stability, prosperity, harmony, equity and fairness at large in the republic.

These are abiding values and objectives of any collective political enterprise, as the Indian state moves forward to fine-tune its national destiny in a mixed neighbourhood and in an unfriendly and exacting global environment. The Congress has a proud record as a party of the national freedom struggle and as a political instrument that consolidated the nascent nation-state. And it remains central to the vibrancy of our democratic polity.

All that is needed is for the Congress is to find, once again, its political voice. That task stands neglected because the Congressmen have stopped making demands on their leadership.

That, let it be recalled, was not always the case. Jawaharlal Nehru, for most of his prime ministerial years, found his policies intermittently challenged and resisted from within the Congress; the Indira Gandhi years saw two definite ‘splits’, each designed to realign the party’s internal equations in tune with the changed political economy; Rajiv Gandhi faced resistance, most openly from V.P. Singh and Arun Nehru; P.V. Narashima Rao, too, was challenged – remember that famous Talkatora Stadium celebration of a bogus rebellion; and then, Sitaram Kesari, an elected president, was deposed unceremoniously in that infamous coup on March 14, 1998.

Since then, the Congress has remained too satisfied, all too comfortable with the status quo. This unthinking embrace of the status quo – which meant an unapologetic family leadership model – has had a deleterious effect: the Congress has lost its collective capacity to critique itself, its policies and personnel, and in the process began eroding its own raison d’être as the premier agency with responsibility to further national goals and interests. Individually and collectively, the Congressmen became afraid of any new experiment and frowned upon any change.

During her long tenure as the party president, Sonia Gandhi had available to her a phalanx of experienced and seasoned leaders; they were hungry, angry and agitated enough to want to restore the Nehruvian equilibrium to its central place in the polity. They constituted her praetorian guard and did a damn good job of protecting her.

But all those leaders are now too old, too tired and too exhausted to play a game that is becoming all too bruising. These dynastic impresarios can neither protect nor inspire Rahul Gandhi as the natural claimant to the Congress presidential gaddi. All those who could not even resist the allure of promoting their own sons and daughters can hardly be expected to steer Rahul towards the requisite political wholesomeness.

It has taken Rahul more than a decade to barely put behind him the unflattering ‘Pappu’ tag. He led a good fight in 2019; there is no doubt that very many people came to admire him and to develop a grudging respect for him for his perseverance in the face of setbacks and adversity. But now this resignation! It betrays a lingering self-doubt. He surely seems to have concluded that he lacks the brutal decisiveness, the skills, the determination and the energy to take on his saffronised rivals.

Political life in India, or for that matter anywhere in the world, is a thoroughly exhaustive undertaking, demanding a total surrender of the individual space and sentiments to the collective good – a concession Rahul continues to find difficult to make.

Watch: Can the Congress Sustain Itself Without Rahul Gandhi at the Helm?

The Congress must now accept Rahul’s offer to step down and find a replacement for him from outside the “family”. This is a significant moment and should not be lost. A political party must learn to move on and to develop a healthy appetite for an occasional date with brutality; Narendra  Modi did precisely that when he managed to convince the BJP cadres and leaders that the Vajpayee-Advani syndrome was no longer able to answer the needs of a changed time.

Rahul has age on his side; that means that if he is not allowed to go home now, the Congress would be truly stuck – fevicoled – with him for the next 20 years, and that too on his terms. Those terms are imperviously lodged in a dynastic catechism.

The arrival of Priyanka as a star campaigner introduced a new face and certain energy in the election season; but it also reinforced the image of the Congress as a family tableau. The Congress got reduced to a bhai-behen party. And it was only a matter of time before Modi worked, unsparingly, into his election rhetoric the naamdar-kaamdar binary.

The Amethi nomination day also saw the return in the frame of the unlovable Robert Vadra, as well as the emergence of the young Rehan as the possible heir to the family political estate.  The 2019 poll was much more than an electoral defeat; it was also a rejection of the dynasty leadership model.

The Congress faces an entrenched political rival; it finds itself having to challenge an ideology that seeks to negate every tenet of the Nehruvian theology; it has to come to terms with churnings in our social arrangements; it has to learn to craft a credible worldview that our citizens would find reassuring; and, above all, it has to display a clarity of purpose and vision that its own cadres and activists can happily internalise. The Congress needs nothing short of a cultural revolution. The Gandhis cannot be part of that solution.

The Congress must allow Rahul Gandhi to step down gracefully. Far too many Congressmen have their personal fortunes tied to the Gandhi family’s coat-tails. It is these leaders who are instigating fears of “disintegration” and “collapse” if Rahul goes home.

A period of turmoil and turbulence will do the Congress immense good; party members must learn to examine, question and, if necessary, junk all its established protocol of relationship between the leader and the led, between command and obedience. The Congress needs a bit of blood on its cobblestones.